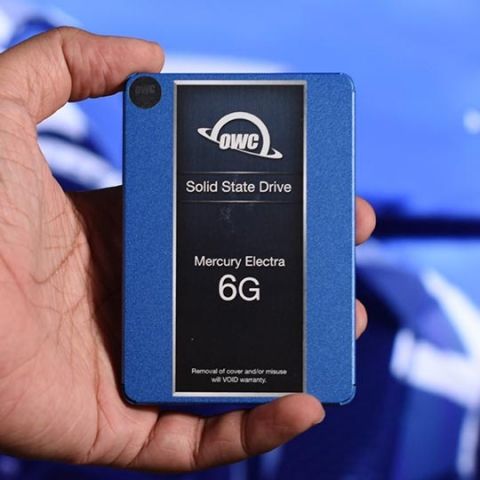 The OWC Mercury Electra 6G MAX 1.92 TB SSD might have an older controller but it makes up for that by providing similar levels of performance as the newer drives. The IOPS values don’t scale so certain enterprise applications will get affected but then again there is little competition when you want to get a lot of space and that too on an SSD. With such a high capacity, the OWC Mercury Electra 6G MAX 1.92 TB caters to a demand that no other manufacturer does and that too with a cost/GB that’s very competitive. These are the two key reasons to go for this drive.

If you haven’t heard of OWC, then you’re forgiven. They’ve only recently entered India and most of their product offerings are focused towards Apple’s Macintosh computers. SSDs are the first from OWC’s product portfolio to be released in the country and they have quite a few storage products around the Apple ecosystem. The OWC Mercury Electra 6G MAX 1.92 TB SSD is the largest capacity SSD that we’ve tested. There have been others such as the Intel 750 and the OCZ R4 Enterprise SSDs which have graced our Test Centre but none of them boasted the capacity that the OWC Mercury Electra 6G MAX 1.92 TB SSD has.

This isn’t a new SSD, OWC introduced this one about a year back in other markets. So we expect to see a slightly older controller but all we’re looking at is if it gets the job done right.

Since the OWC Mercury Electra 6G MAX 1.92 TB SSD is a large capacity, we were excited to take a look inside and see how many NAND chips it would take to make up the entire 1.92 TB of space. Turns out, there’s just eight chips. Which means each chip stores a massive 240 GB! The entire design inside is quite different from what we’ve seen so far and we’ll explore the same in greater detail in the next section. The OWC Mercury Electra 6G MAX 1.92 TB SSD is powered by the SM2246EN which is an energy efficient Silicon Motion controller. And yes, it’s not anything recent. The data sheet mentions the performance to be quite similar to other 2.5–inch SSDs and the IOPS capability is above average as well. Let’s take a look at the specifications in detail.

The power consumption values seem to be slightly on the higher side and when you have that many NAND chips on the inside for a 1.92 TB SSD, this is only natural. The official spec sheet lists the IOPS to be a lot lower than what the controller is capable of which again, caught our eye.

The body of the OWC Mercury Electra 6G MAX 1.92 TB SSD is made out of aluminium and opening it up was quite easy. Every chip has a dollop of thermal paste to help reduce temperatures and the aluminium casing certainly helps with that aspect as well. On the inside, we were greeted with a slightly barren PCB with just two RAM (NT5CC256M16CP-D1) chips. 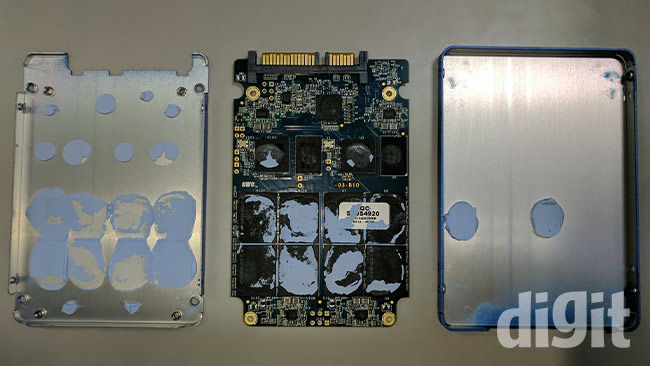 There is a third IC in the top right corner which holds the BIOS of the SSD. The two DDR3L RAM chips (NT5CC256M16CP-D1) each of which has a capacity of 256 MB are clocked at 800 MHz which is standard for SSDs. Then we have eight spots for the NAND chips which are unoccupied. Given that there are just eight NAND chips on the SSD overall, this PCB can theoretically support 3.84 TB but that’s just wishful thinking, especially for consumers. For all we know, there might exist enterpriser SSDs of such capacity. 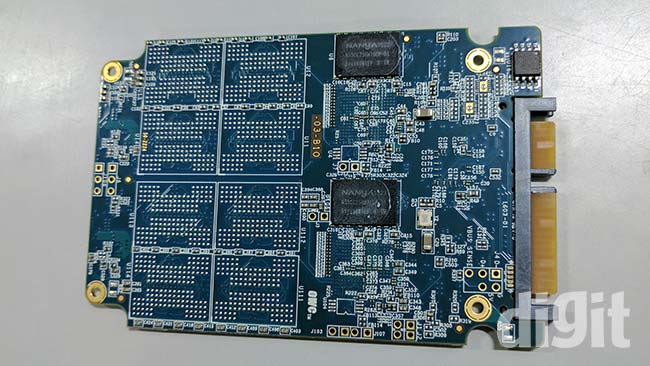 On the back, we see all the meat. And what we noticed is a slightly different approach. There are eight NAND chips, two Silicon Motion SM2246EN controllers, two more RAM chips and a JMS562. That last chip is an eSATA Gen III bridge with support for RAID 0 and RAID 1. Yep, this SSD is basically two SSDs in RAID. Hence, the two Silicon Motion controllers instead of just one. We suspect that this might be the reason why the spec sheet mentions a lower IOPS figure as compared to what the controller is capable of individually. 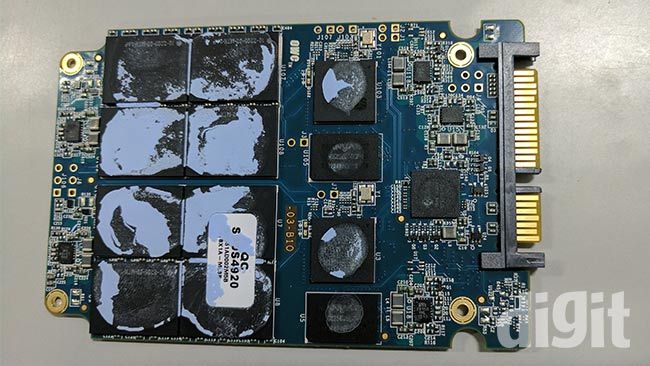 And lastly, the PCB has bronze plating on all the through holes and mounting holes. Moreover, the PCB is a bit thicker which adds to its durability. So how does the SSD perform? Read on to find out.

In our CrystalDiskMark test prior to conditioning, we got read speeds of 539 MBps and write speeds of 496 MBps. These speeds are quite good for SSDs connected to SATA III interface. The speeds for 512K, however, seem to be slightly on the lower side. Compared to the WD Green SSD which we recently tested, this value is about 18 percent lower. On the other hand, the 4K read speeds are roughly twice as that of the WD Green. Which means that the OWC Mercury Electra 6G MAX will offer a more fluid performance for day to day productivity applications. The odd thing here is that the controller doesn’t seem to scale with the increase in queue depth. This may be due to the fact that the JMS562 isn’t as capable a RAID controller as we figured it out to be.

Anvil is an all in one benchmark for SSDs and we’re getting pretty much the same scores as CrystalDiskMark. And again, we see that the IOPS scores are pretty consistent across different levels of queue depths.

I/O latency timings are way better than most other SSDs we’ve tested. We’ve seen response times as high as 6.3 milliseconds at 128QD on drives like the WD Green but the maximum that the OWC drive hit was 2.66 milliseconds which is way better than the Green. If you’ve paid attention to what we’ve said about the IOPS earlier then you’ll understand why this is so. 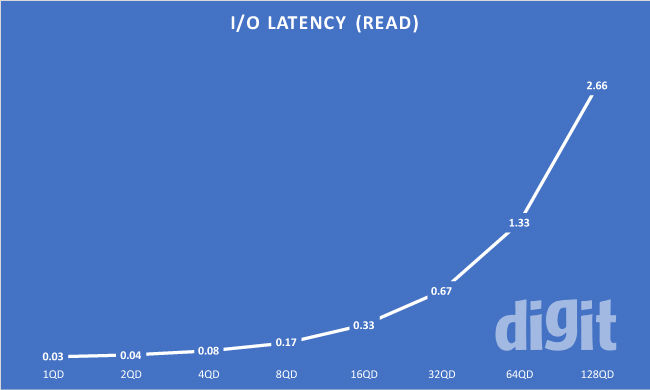 What’s better is that the I/O latency timings for write operations are similar to the read operations which is a rare thing to experience. Almost all drives we’ve tested have exhibited higher read latencies but the OWC is better at this. 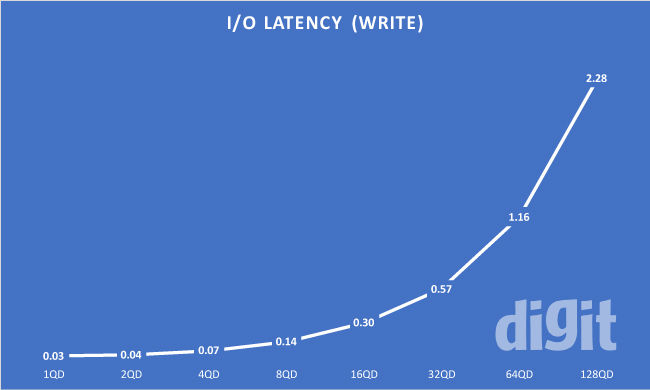 If you guys haven’t figured out the reason for why this OWC drive has better latency timings than other SSDs then the answer is quite simple, the IOPS value don’t scale according to QD. Which means regardless of increasing QD, the IOPS value remains around the 9-10K mark so the response time doesn’t get worse with higher QD. Hard Drives give about 120 IOPS for 5400 RPM with the 15K RPM drives giving approximately 390 IOPS. The OWC drive with around 9-10K IOPS is quite sufficient and higher IOPS values don’t make much of a difference in day to day productivity tools. It’s only the more intensive database applications which benefit from higher IOPS at peak loads.