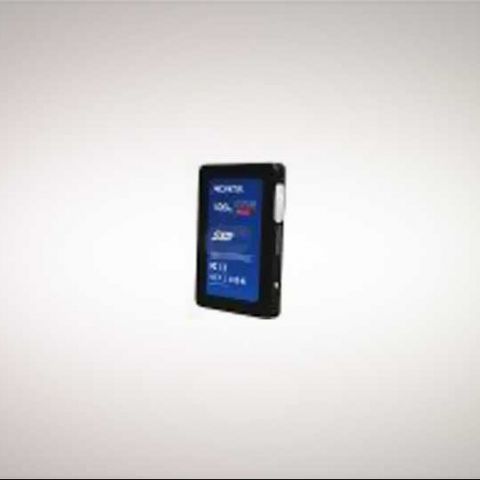 At nearly 10 times the price of a normal HDD, the ADATA S599 SSD is surely for early adopters. The performance benefits of SSD technology are currently more in access and seek times than in actual speed. However the ADATA S599 is lighter, noiseless and low-power consuming as well.

Even as breakthroughs in magnetic recording push HDD storage outwards, it is a sad fact that hard drive speeds have failed to scale as much as their capacities. We have larger media files, games and even documents now, yet we haven't reached the point when multi-gigabyte photos open instantly and games transition smoothly between levels. Or have we?

We reviewed a 128GB version of ADATA's SSD S599 drive, which for an SSD is still at the higher end of the spectrum. The drive is available is capacities of 40GB, 64GB, 100GB, 128GB, and 256GB with all other characteristics similar.The SSD boasts of a maximum read speed of 280MB/s and a maximum write speed of 270MB/s, pushing the SATA II interface it uses to the limits.

Being an SSD, and hence devoid of any complicated arrangement of moving parts, the ADATA S599 is noiseless, and consumes lesser energy than your usual hard disk drive. Additionally, it is lighter – a mere 68 grams, less then your average smartphone – and shockproof to a much greater degree. All this combined with the fact that it comes in a 2.5” form factor makes it quite a boon for laptop users. Desktop users aren't left behind either as the ADATA S599 comes with a convenient 2.5" to 3.5" bracket.

Without platters to move across and physically read data from accessing data from random locations on an SDD takes considerably lesser time than with a traditional hard drive. The ADATA S599 gave us access times in microseconds as opposed to the usual millisecond timings of HDDs.

Testing the SSD was a challenge in itself, since our real world test involves the common task of copying files to and from the drive. For testing the SSD the other drive would need to be faster for sure. We decided to use a RAM Drive, a virtual drive that uses your RAM as the storage. Such a drive gives extraordinary speeds and should go unchallenged for a while.

During our tests the ADATA S599 performed quite well, giving write speeds as high as 180 MB/s, but averaging out to around 110 MB/s. Note that with speeds like this you can have an entire DVD copied to your disk in under a minute and a 50GB BluRay in under 10 minutes! Of course with a capacity of 128GB, you probably wont. Read speeds were even more impressive, averaging around 180Mb/s and peaking at over 200 MB/s.

Are these speeds impressive though? When compared to a desktop with two WD Green edition HDDs in RAID0 (striping) using a standard Intel controller integrated in the motherboard, we got higher write speeds on average (~140 MB/s) and a little lower read speeds on average (~150 MB/s). 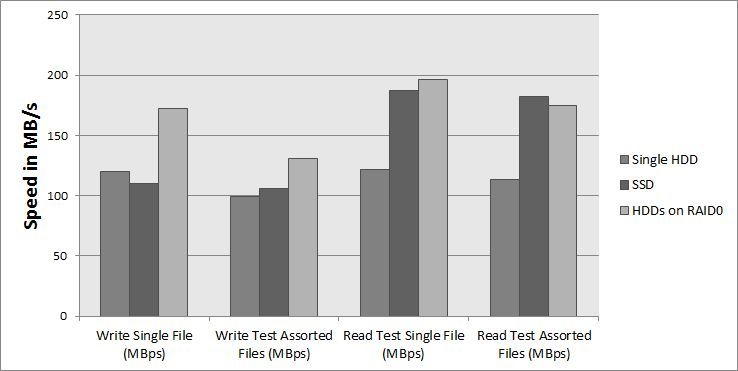 Limited write cycles are one of the few failings of SSDs (apart from price). The number of time data can be written to NAND storage calls used in SSDs is quite limited from as little as 5,000 to 10,000 times for MLC (Multi-level cell) to 100,000 for SLC (Single-level cell). In fact it is likely to run out in a relatively short amount of time unless the drive controller doesn't intelligently ensure than the number of writes are minimized. Hence an intelligent controller is present in SSD drives that ensures that no single area of the drive gets written to more than any other (a process called wear-leveling). This is especially important in context of OS and filesystem tendencies to update logs, journals and file allocation table, causing those areas to get written to more often than others, and thus wear out sooner. Since SSDs make or break without their controller it is quite important which one is used.

Where the SSD wins is in its much faster random access times. Calling up any data on the SSD takes an equal amount of time irrespective of where it is located and what part was previously being read. This makes fragmentation a non-issue on SSDs and makes defragamenting an SSD drive nearly pointless, and in fact harmful to the drive due to a limited number of writes.

The ADATA S599 SSD features the SandForce (SF-1222) controller. SandForce uses a number of innovative tricks and techniques in their controllers that manages to increase the life of the SSD. It manages to give the SSD a 5-year life, which might not bring it up to par with HDDs, but at least makes it feasible.

This also makes launching applications and booting an OS much faster. With Windows 7 installed on the SSD, we installed a number of common applications, and here are some results:

Windows 7 itself took a mere 21 seconds to reach till the desktop from the boot menu. These speeds are impressive, and better than what can be claimed for the system with HDDs in RAID.

The ADATA SSD S599 is priced at Rs. 14,140 for the 128GB SSD. So why would you spend nearly 10 times as much for an SSD drive? Well, if you're tired of seeing splash screens, if loading dialogs bore you, and if you have the money to spare. Otherwise, you might be able to get nearly as much performance, and 8 times the capacity at nearly half the price by going for two standard 1TB HDDs and putting them on RAID0.

For laptop users SSDs are a great way to get a huge boost in hard drive performance, since the RAID option is usually not available, and laptop drives are slower to begin with. Desktop users will find that an SSD will give Windows a big performance boost, in booting and launching applications, over and above what they might get from a cheap RAID0 solution.

Remember than although storage is usually a bottleneck to your computers speed, it is only one of the bottlenecks. While even a low-powered netbook can benefit from a lighter, less energy-consuming drive, it won't suddenly make your netbook run PhotoShop or play Crysis, you wont be able to encode HD video at 200MB/s either.

SSD technology is still in active development, and still has flaws that make it unsuitable for those who use their disks heavily. Faster and more resilient SSDs are sure to come in the future with SATAIII support. For now this is still a technology for early adopters.