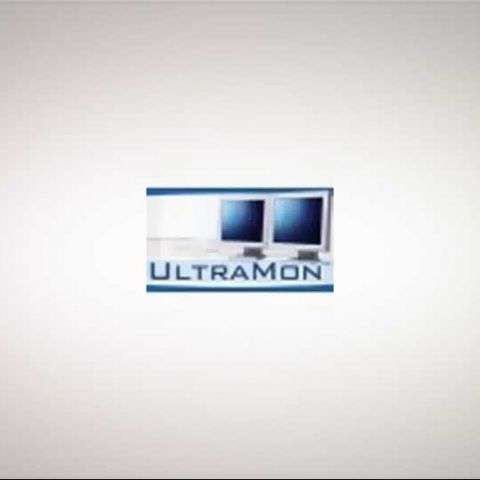 UltraMon is a great application which favours those who know scripting. Its interface is simple yet powerful. Of particular note are its display profiles feature that will make it an excellent choice for those with changing display configurations, and its mirroring feature. Where it does lack is in its weak secondary taskbar that provides few features.

UltraMon is a software by Realtime Soft that is designed to simplify working on multiple monitor systems.

UltraMon isn't a single application, but rather a small collection of tools that provide different aspects of UltraMon's functionality. UltraMon is modular, and you are presented with the option to install only those features that you will be using.

The four aspects of UltraMon's functionality are:

Some of these features such as a dual monitor taskbar, screen-saver manager, and wallpaper manager can be found in DisplayFusion and Actual Multiple Monitors, which we reviewed previously, as well.

On installing UltraMon immediately starts displaying a secondary taskbar on each monitor. UltraMon's multi-monitor taskbar has just the bare functionality needed to manage applications on multiple monitors. There is no grouping of icons, no Windows 7 features â€’ although the taskbar does copy the basic appearance â€’ no clock etc.

UltraMon supports two modes for the secondary taskbar. A standard mode in which only the applications that are there on a particular monitor are shown in its taskbar, and a Mirror mode in which both taskbars display all icons.

Unlike DisplayFusion and Actual Multiple Monitors, UltraMon allows you to disable the taskbar for a particular monitor. So if you have a triple-monitor setup, you can have the taskbar display on any two monitors instead of all three.

A profile can define a single background color or image for both displays, or choose separate images / colors for each. Instead of a single color background, you can even choose to have a gradient as background.

You can define a number of such profiles, and switch between them using this dialog. It would have been helpful if a number of simple profiles showcasing these features was available though. By default the application comes with no background profiles.

The screen-saver management application of UltraMon is also rather straightforward. Your monitor configuration is displayed at the top of the application dialog; you simply need to select a monitor, and select a screen-saver for it.

This is a brilliant feature that only UltraMon offers of the applications reviewed so far. With the mirroring feature, you can have your monitor mirror the contents of another monitor, an application or part of the screen.

You may think that mirroring the primary display is a feature already available with Windows, however the mirroring feature of UltraMon is significantly more powerful. Windows can only be set to mirror the primary display on your secondary display(s), however there are resolution constraints (both screens are run at the same, lower, resolution) and you cannot mirror only part of one display on another. With UltraMon's mirroring feature you can choose not to mirror the mouse cursor, and you can apply horizontal / vertical flip transformations to your display, in many cases you can even zoom the mirrored contents to have a closer look.

You can select a source for the mirroring, this could be:

While these four are additional modules that are installed with UltraMon, the application has a number of features that are not part of these modules. First of all UltraMon offers a few window management features that will make your multi-monitor experience better.

UltraMon can add two additional buttons to your titlebar, one for moving between monitors, and the other to maximize a window to all displays. These options can also be added to the titlebar menu command.

UltraMon also features a large number of hotkey options â€’ although not as many, nor as flexible as DisplayFusion â€’ that range from moving windows between monitors, tiling / cascading windows and other window management functions, to launching applications, changing display profiles and starting mirroring.

UltraMon displays a number of options when you right click on the UltraMon icon in the system tray, it is likely you will not use all of them. To clean up the menu a bit, you can choose to disable some of these features, to make the important ones easy to access. You can also change which feature of UltraMon is launched when you double-click the system-tray icon. Additionally you can change this icon itself.

For example UltraMon allow you save your icon locations. While this is useful for those whose display configuration keeps changing, if you are using something like Stardock Fences, it will not be that useful, and can be disabled.

A particularly useful feature â€’ for some â€’ of UltraMon is something called Display Profiles. You can define multiple configurations of monitor arrangements, resolutions, colour depths, orientations, and refresh rates under different profiles. You can then switch to any profile at any time. Optionally you can have a particular profile automatically set on login or create a shortcut for the display profile on your desktop or elsewhere.

Since UltraMon can manage as many as 10 monitors, it has an option to optionally ignoring one of more monitors, such that they will not be displayed in other UltraMon functions.

For those who don't mind coding a few scripts, the great thing about UltraMon is that is is scriptable! Not only does UltraMon have extensive command-line options to control its many features, but it also exposes a scripting interface, that can be used from Windows scripts, allowing for complex interactions of features that aren't possible using hotkeys.

Even if you aren't the kind to script, you are sure to find a number of scripts on the UltraMon website and forums that you can use directly.

Finally, UltraMon also features a few add-ons. These include a screen-saver app to display a screen-saver on one monitor while you work on another, an add-on that uses your UltraMon wallpaper profiles for your screen-saver, and an add-on to move the active window to another monitor on using the mouse middle button on it.

UltraMon is a great and powerful application that provides particular benefits to those who don't mind a little scripting. Its interface is simple yet quite powerful. Where it does lack is in its weak secondary taskbar that provides few features. Of particular note are its display profiles feature that will make it an excellent choice for those with changing display configurations, and its mirroring feature.

UltraMon works on all versions of windows going as far back as Windows 2000. It is not a free application, but comes at a price of $39.95 (currently Rs. 1,810) for a single license. For those that can take advantage of the scripting support and the display mirroring feature, this is a great buy, otherwise you stand to lose out on some of the greatest features of this application, and would be better off with one of the other applications we reviewed.