The PCLinuxOS distro comes in a number of flavours. It offers Gnome, KDE, and OpenBox desktop enviromnents amongst others. It also comes in a variant known as 'Enlightenment Desktop' which includes a window manager of the same name. We went ahead with the KDE version. The installation process was pretty straightforward. It gave the standard boot options given by some other distros such as failsafe, slowboot, live CD etc.

During installation the PC Linux bull logo goes darker as the live CD loads and the system boots - a nice touch. This raised the bar for further eye candy on the actual desktop. The installation process was not using a wizard but rather like an application. In fact once in an attempt to close a new dialog box the entire setup shut down by accident. At the end, after partitioning and selecting root partition etc, it comes up with a rather silly message - "Please halt your computer, remove your Live CD media and restart your computer." Confusing isn't it? Are you supposed to click finish first? Restart the comp? Or eject the Live CD in which case the desktop would crash. Turns out the correct order was Click Finish > Restart > Remove Live CD.

Coming to the actual usage - the desktop environment is quite nice to use. They've nailed the Areo Snap effect ala Win7 quite well. When you drag a window to the top margin it expands into full screen mode. Similarly move a window to either of the side edges and it quickly snaps itself to the edge and occupies half the screen. In terms of changing the appearance the Emrald Theme manager does a good job - there are a few themes bundled - even a Ubuntu clone. But perhaps the best enhancement to the UI was Plasma Desktop that allows widgets to be pulled on to the desktop. It had a good collection of Widgets like a RSS feed reader, calendars, different clocks and performance meters. 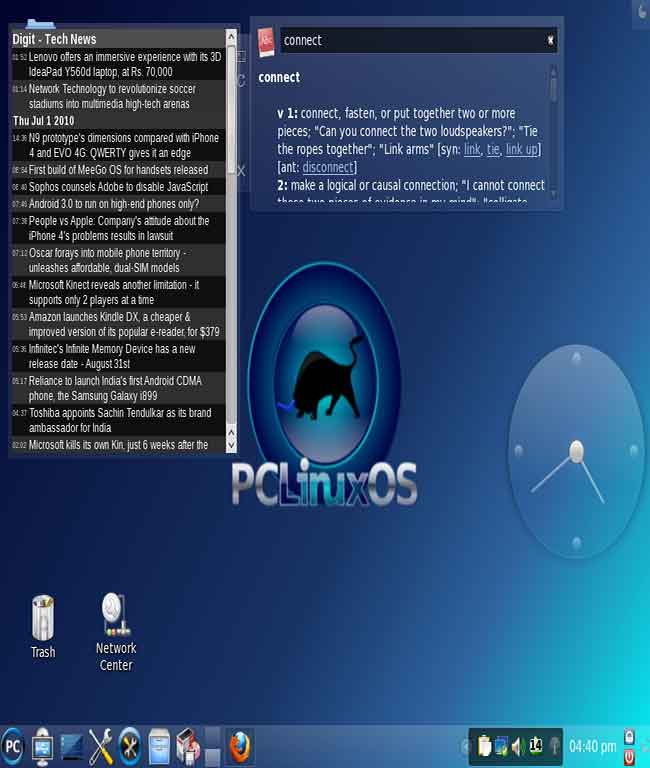 One of the biggest differentiators for operating systems in terms of appearance is the font face. Linux renders fonts quite horribly while windows does it a little better, but nothing compared to the smoothing enhanced beauty of the Mac OS. While PCLinuxOS didn't render fonts too badly, Mint does a slightly better job.

Except for office applications we couldn't complain about the packages that came with the OS. For instance in the internet and communications domain PC Linux came with a browser (Firefox), a twitter client (Choqok), an IM client (Pidgin), mail client (Thunderbird), torrent and even Dropbox ! There was no office suite bundled and the text editor (KWrite) was pathetic. At least AbiWord would've raised the score a little above the zero that we gave it on this criteria. The main menu was well categorised but a Mepis or Mint-like search would've been better. Although a nice addition was the displaying of recently used applications. Kwallet - the default password keeper integrates into all programs that require logins. We checked randomly for codec support and found that SM Player could handle all of the different encoded video files we threw at it. The default music player was Amarok which does what it's supposed to quite well. For file managers there was a choice between Dolphin and Conqueror - nothing spectacular.

For system configuration and settings the "PCLinuxOS Control Center" was quite good. All necessary administrative requirements such as setting up of web server, network devices, adding hardware etc was made available at one place. Similarly a tool in the task bar called "Configure Your Desktop" took care of all things relating to appearance, look and feel, and user account setup. The bottomline - PCLinuxOS is an intuitive desktop distro that you will stick to for a long time before trying something new.