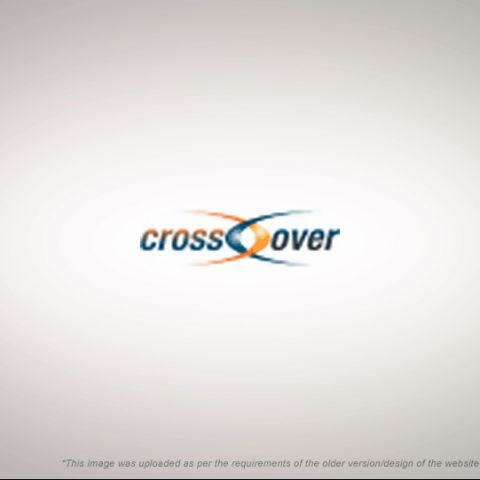 Crossover Linux 9.0 is an easy to use application to get popular Windows applications running on your Linux installation. Perfect if you need a supported version of Wine, but not a necessary expenditure for someone willing to hack around a little.

For those who already use Wine, you already have an idea of how well Windows applications can run on Linux. CrossOver Linux 9.0 for example comes with Wine version 1.1.34 as such the software compatibility should be comparable. However since CrossOver will guide you through the installation of all the prerequisites required to run supported applications, you might notice that the supported applications run much better. Office 2007, for example will install without problems in CrossOver 9.0 while it takes quite a bit of work to get it to install with Wine.

The installer requires minimal to no adjustment from the user, as the default settings are what work best. In just a few steps you have your own installation of CrossOver in /opt/cxoffice. 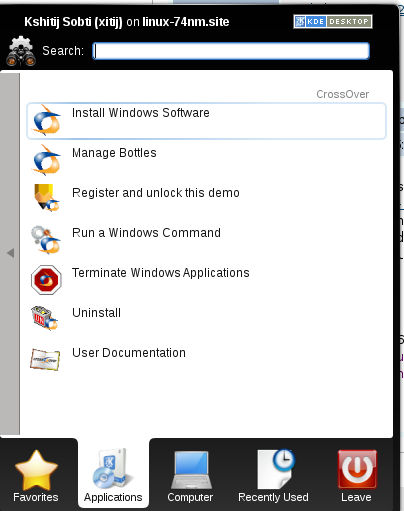 All CrossOver utilities are easily accessible via your windows manager's menu under CrossOver.

CrossOver when installed creates a CrossOver menu in your the KDE / Gnome menu, from where most of the CrossOver utilities can be installed. You need to do nothing special for running applicaitons, as CrossOver allows Windows application to run simply on double clicking, just as in Windows.

Under this CrossOver menu, you will find links for the Software Installation tool, the Bottle Management tool, an application to terminate misbehaving Windows applications and a run command equivalent to the Windows run command. Other than that you can also uninstall or register CrossOver from here, or view the documentation.

All these CrossOver utilities, among others can also be accessed via the command line.

On the next page we give an overview of how to install and run applications in CrossOver 9.0 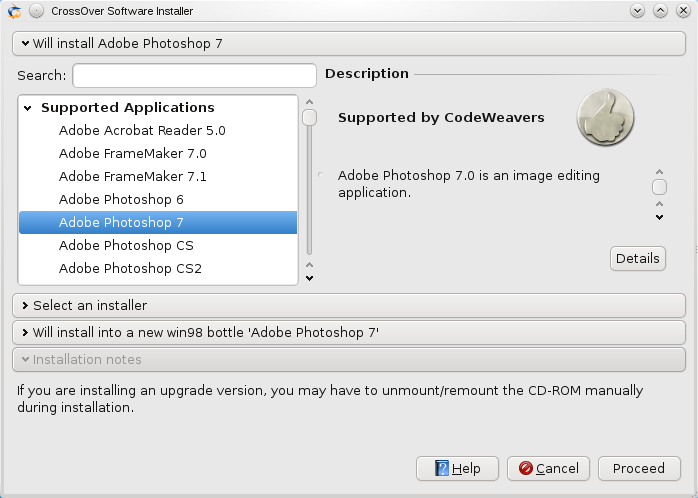 One might think that since Windows applications already launch on double-clicking, installing applications would be as straightforward a process as on Windows, simply double click on the installer and follow instructions. Many times this will just work; however most of the times for more complicated applications and installers, this will usually fail. Applications such as Office 2007, Photoshop etc, have complex dependencies and fail to work, or fail to work correctly unless these are met.

Usually you would have to go online and check for instructions before you could try to install an application in such a case, or look at the complicated install logs of an application to determine at what point and due to which component the install / running of an application fails.

With CrossOver, comes the Software Installer. This handy software installation wizard guides you through the installation of software which are compatible with CrossOver. The Software Installer allows you to select the from a list of applications, runtimes, service packs etc, which CrossOver knows how to install. You can then select a source of installation, a disc, or an executable. For some applications, CrossOver has a pre-fed location for the file, and can automatically download the application before installing. Here you can also select a bottle in which to install. You will see a list of all your existing bottles, and you can create a new one if you wish.

While installing Internet Explorer 7 for example, CrossOver will first automatically download the core Windows fonts, Microsoft XML Parser, Flash Player 10 ActiveX, and finally Internet Explorer, and install them in order, so that the installation IE goes as smoothly as possible. For software that requires it, it will also provide tips for smoother installation. In the case of Internet Explorer 7.0, you are asked to uncheck the option for downloading updates in order to ensure that the installer installs successfully. 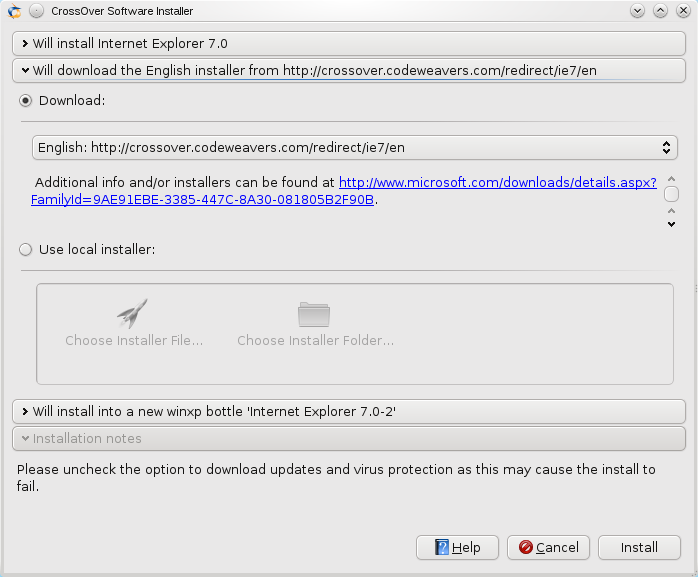 The CrossOver software installer installing IE7. It will automatically download all required components.

You can install unknown / unsupported application using the Software Installer, although the only advantage that seems to provide over and above simply double clicking on an application to install, is that you can select a bottle. 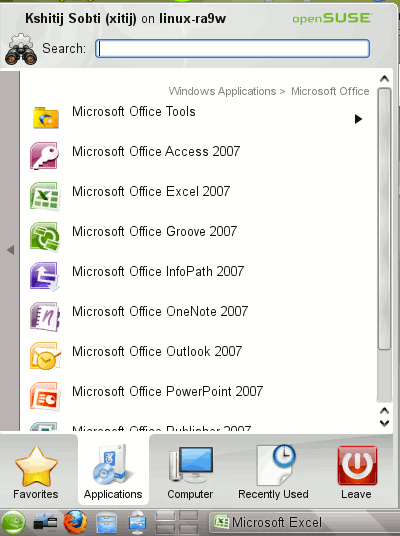 Microsoft Office 2007 applications installed on openSUSE appear in the KDE menu, making them as simple to launch as they would be on Windows.

Now all that's left is to actually run the application that you have installed, and this is not more difficult that clicking on the name of the application in the menu! All Windows applications installed using CrossOver install under the "Windows Applications" menu in the KDE / Gnome menu, in the same hierarchy as they would in the Windows start menu.

Unfortunately, since these are Windows applications installing on Linux, they will not install in the neat categorizations that you find on Linux, however if you have used Windows enough, you will know exactly where to find them.

On the next and final page we take a look at how bottles are operated in CrossOver, and some of CrossOver's limitations. 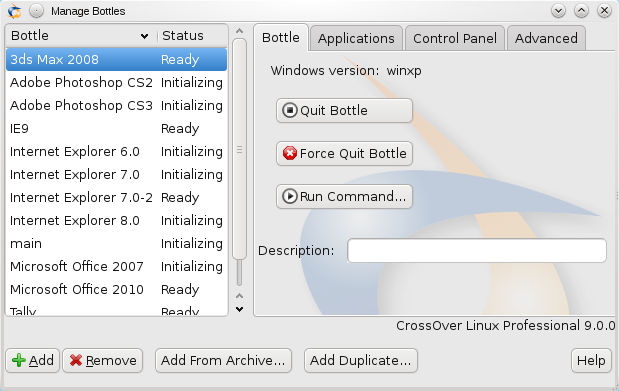 Managing bottles with CrossOver. Each application is installed in its own virtual windows installation.

A Control Panel is also present for each bottle with some basic tools for configuring the bottle. It contains tools for editing file associations, which allows you to set a Windows application to handle a file type. So you could have a copy of Winamp playing back music files on Linux by default. File associations can be fine-tuned so you can have a Windows applications set as the default file handler when the particular type is double clicked, or you can set it to just display as one of the option included in the "open with" dialog. You can also chose to simply register or ignore a file extension.

From the control panel you can also simulate a reboot of the Windows bottle for applications which need it, without needing to reboot the Linux distro itself! A Task Manager in the control panel lets you introspect applications running in the bottle, and close misbehaving ones. A tool to configure the settings used by Wine for that particular bottle is also present, and is the same as the tool which comes with a vanilla Wine install.

The control panel will also include any items that the installed application would have created in the Control Panel. For example Internet Explorer will create an Internet Options control panel entry.

Creating an archive from a bottle is as simple as clicking a button and selecting a folder to save the archive. In the professional version you have additional options to export a bottle to a Linux rpm, deb or sunpkg package which can then be installed using the OS's own package management system.

In the professional version you can also publish a CrossOver bottle, which will then make it available to all users on the system. A published bottle will be accessible to all users, however any changed made in the bottle will only be stored in the users' home folders, keeping the original bottle clean.

What CrossOver is not

I have talked a lot about what exactly CrossOver brings to the table, that some mention of its failing need be discussed as well. These are not really flaws of the software itself, but of its perception, and of its users' expectations from it.

It does not make Linux behave like Windows: For someone switching from Windows to Linux, it is important to know that simply installing CrossOver or Wine will not enable Linux to suddenly work like Windows, and adopt the Windows way of handling partitions, file permissions etc.

CrossOver and Wine favor those with experience in using Linux, and if you have been using Windows for a while, CrossOver does not mean you wont need to learn how Linux works. It is not a way for a Linux n00b to hang on a little longer to their Window environment.

While CrossOver tries to rectify this to a large extent, it will not make Windows programs suddenly understand how Linux works. It will be Linux, and you the user of Linux who will need to do all the adjusting to the new environment.

Wine and CrossOver are brilliant products once you accept the flaws as part of the package, and consider it more a product to ease migration to Linux than an instant replacement for Windows. There will be pains, as users switching from Windows to Linux CrossOver will surely need to adjust to Linux, CrossOver won't help there. It can however let you make the best of old software licenses, which might have been preventing a full migration to Linux, and let you use Office 2007 in case OpenOffice does not suit your needs.

In the next and final part we will take a look at some of the supported and unsupported application running on Linux.