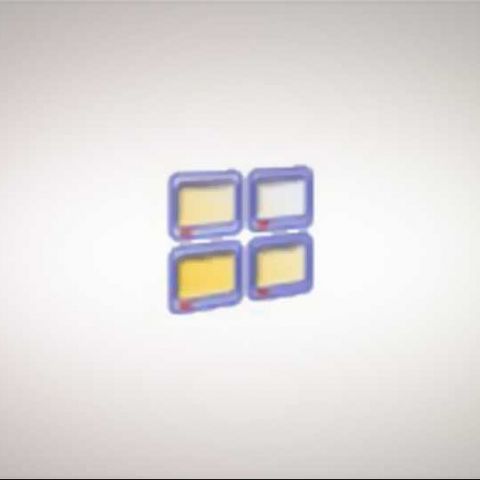 Actual Multiple Monitors is a great tool for managing your multi-monitor setup. It provides one of the best replications of the Windows 7 task-bar making it even more useful for those with the OS. It is stable and has a great feature-set, and is appropriately priced at $29.95.

Actual Multiple Monitors 3 is a multi monitor management tool by Actual Tools that provides a number of features that multi-monitor owners will find of use. The 3rd version, which is what we have reviewed, released recently with some great new features, such as a extensive support for Windows 7.

The Windows 7 task-bar is a complicated piece of work, with features such as Jumplists, live window previews, progress indicators, and a lot more. Actual Multiple Monitors 3 manages to duplicate almost all of that â€’ all of the great features certainly.Just by looking it is impossible to tell whether it is the original Windows task-bar or the one by Actuals Multiple Monitors.

The Actual Multiple Monitors 3 task-bar manages to nail the looks of the Windows 7 taskbar (only on Windows 7 of course), and has support for jumplists, progress display, live previews, windows grouping, multi-previews, Aero peek etc. Some lesser used features such as media controls in the preview, and status icons on task-bar items are not supported.

Of all the applications we have tried, Actual Multiple Monitors 3 has possibly the most accurate reproduction of the Windows 7 task-bar of all! The secondary task-bar can work in two modes. The normal mode of operation is to display on the windows of the current monitor in its task-bar. While this makes sense, it might not be what you are looking for, since it makes windows open in the other monitor less accessible from the task-bar. Another option is to mirror the primary task-bar, so both task-bars show the same open windows. 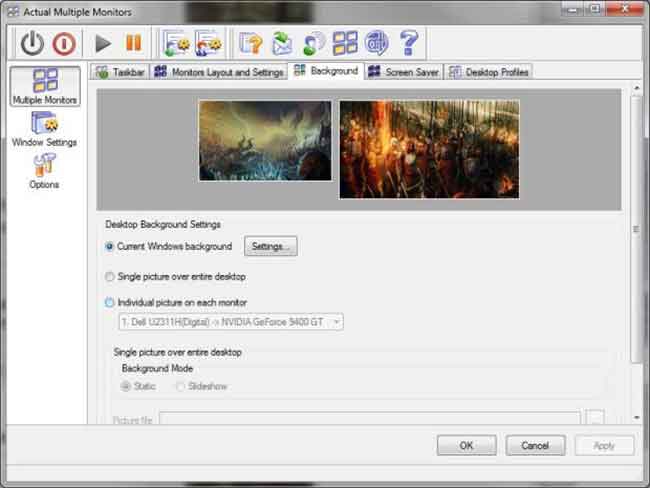 You can create multiple profiles each with a different display layout, background and screensavers. Using profiles you can quickly switch between different monitor layouts and orientations with just a few clicks.

Actual Multiple Monitors also adds two buttons to your title-bar, next to your minimize, maximize and close buttons for maximising a window across both displays, or moving a window from one display to another. These actions are also available though the right-click menu in the title-bar. Since some windows such as Skype, Steam, Winamp, Office 2007 applications etc. have a different window layout, and don't use the standard Windows title-bar you can specify custom settings for them. 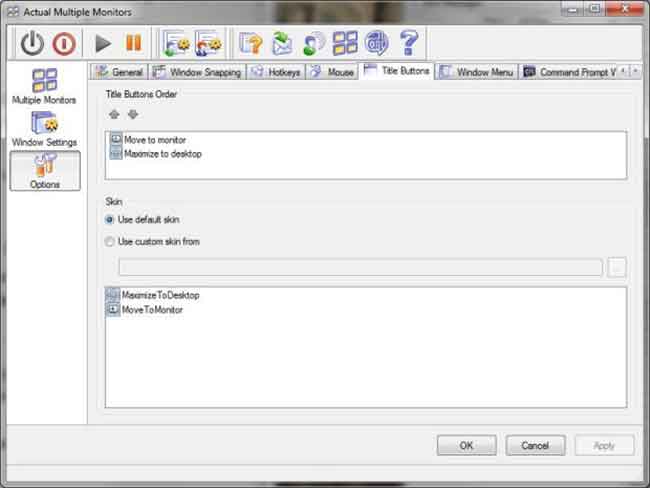 One small, but very useful feature of Actual Multiple Monitors is that it enables displaying the task switcher on both monitors instead of just one. Normally when you press alt tab, the task-switcher only appears on the primary monitor.

Actual Multiple Monitors 3 has extensive configuration options, and supports a number of hotkeys, and mouse combinations that can make your things much smoother. You can, for example, set up your system such that middle-clicking on the title-bar makes your window move to another monitor, or have Ctrl Clicking on your maximize button set to maximize a window across all monitors. It's quite flexible, but the number of things you can set mouse actions for is quite limited. 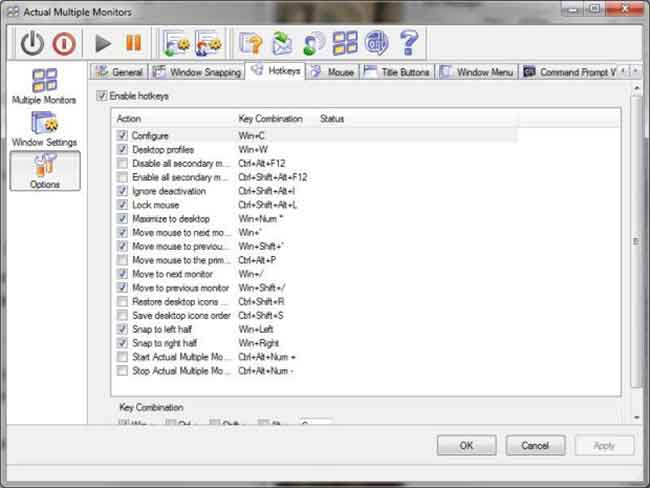 Mouse actions configuration. The number of things that you cna add mouse actions for is rather limited.

In our usage of the product, it seemed quite stable, and did not crash while we were using it. We did have some small problems with the secondary taskbar's multi-preview functionality, which seemed to have problems in mirror mode sometimes. Additionally, the title-bar buttons do sometimes have problems with non-standard windows, however this can be easily rectified by disabling the feature on a per-application / window basis.

Actual Multiple Monitors is also available as a part of Actual Window Manager that includes other applications by Actual Tools, some of which are helpful in managing multiple monitors.