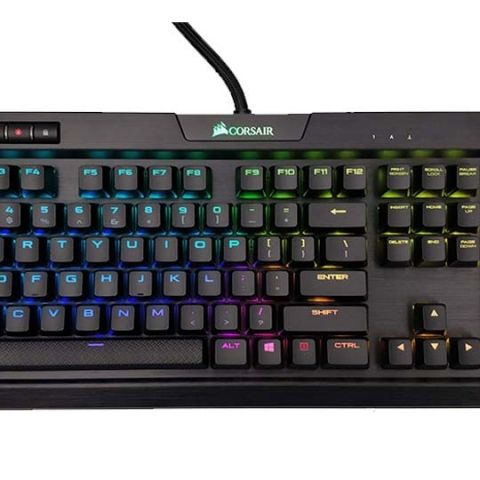 The Corsair K70 RGB MK.2 fulfils all the requirements of a premium gaming and mechanical keyboard. Its build quality and feature set carry on the company’s practice of delivering high quality on their high-end keyboards. Several functions such as multimedia and volume control, profile switching, brightness level and key disabling can be accomplished using dedicated buttons. Software support through iCUE is a great experience to customise lighting effects and record macros.

An upgrade to the Corsair K70 lineup of keyboards was awaited since the release of the K95 RGB Platinum. It borrows all the features and design from Corsair’s flagship mechanical keyboard into a lower price bracket which is still way expensive. The keyboard is essentially a K95 RGB Platinum at the price of a K70. Only if you’re ready to shell out that amount of money, you should consider this keyboard. A more affordable option would be the Razer BlackWidow Chroma V2.

Corsair’s premium line-up of keyboards has always been a standard for mechanical keyboards. Whether it’s build quality, features or software support, they’ve tried to stay ahead of the game all the time. The Corsair K70 (non-RGB) was released four years ago and it saw a few design and hardware updates through the years. The design language of Corsair keyboards usually trickled down from their flagship, the K95. After the Corsair K95 RGB Platinum was released last year, we knew an upgraded K70 was on its way. However, it took more than a year to come out. Essentially, the body of the K95 RGB Platinum has been scaled down to give us the K70 RGB MK.2. Compared to the K70 RGB Lux (the latest iteration of the K70 before the MK.2), you get almost the same features and build quality while supporting the new and upgraded iCUE software. 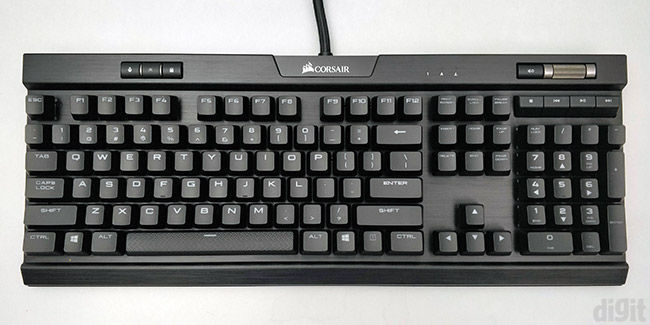 The features on the Corsair K70 RGB MK.2 are of the highest standards that you would expect at this price. You have a USB passthrough port at the top edge beside the braided cable. It can be used to connect your peripherals, headphones and even external storage or pen drives for data transfer. 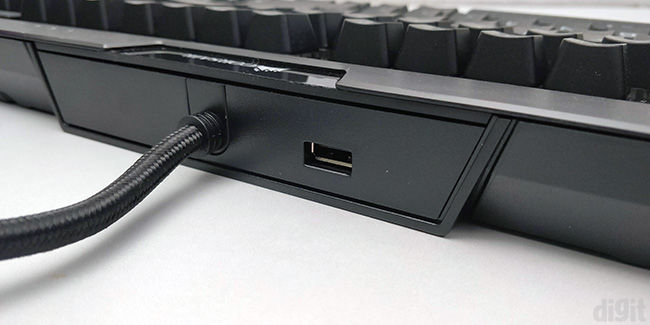 Just like other Corsair keyboards and any keyboard above the 10k price range, this keyboard incorporates full N-key rollover. No matter how many keys you press together, all of them will be registered on your system. You get complete multimedia control through dedicated buttons on the top right corner. For volume control, you get a metal volume wheel with a knurled surface. There’s a faint resistance on the wheel which is favourable enough. However, some users might prefer steps or clicks to be added for a more tactile feel. Besides the volume wheel, you’ll find the mute button. All the buttons except the volume wheel are illuminated with RGB LEDs. 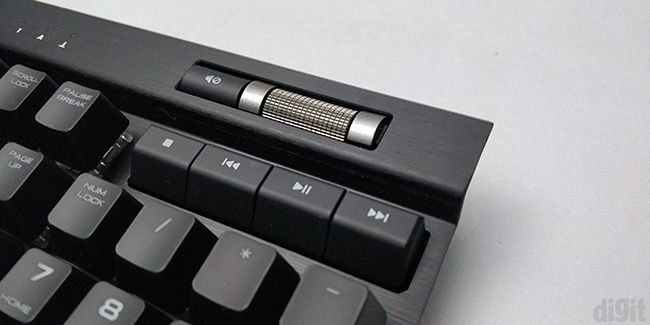 At the centre of the top bar of the keyboard, you’ll find the RGB Corsair logo. Earlier, the previous version was a solid emboss. This time, they’ve added a transparent logo with RGB illumination underneath. Two LEDs light up the logo that can be controlled using the iCUE software. 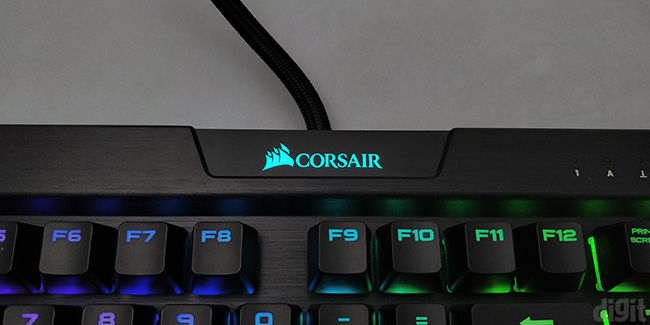 Moving to the left side of the top bar, you will come across three buttons. The first button from the left allows you to switch between three profiles. These profiles can be stored on the keyboard. Different profiles are helpful when you want to illuminate and assign specific macros for certain games or workflows. Having a dedicated button to switch between these profiles makes it more convenient. You no longer have to open up the software every time you want to change the profile. More on the software later. You also have the brightness button and Windows lock button beside it. 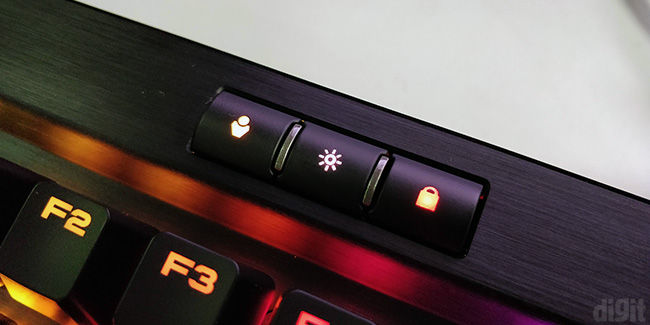 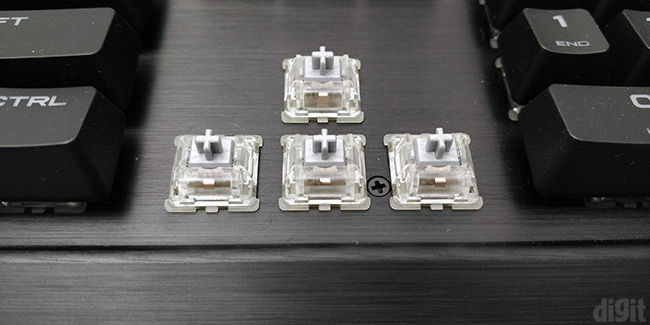 Turning over the keyboard, you’ll find four huge rubber pads at the corners. The top rubber pads also house the extended feet which also have a rubber lining. Similar to the K95 RGB Platinum, there are cable grooves at the bottom. However, you’ll only be able to fit thin cables of devices such as headphones or mice. The grooves aren’t thick enough to accommodate the keyboard cable. 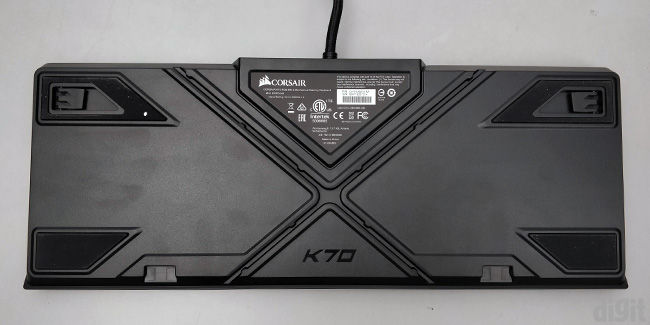 The usual set of accessories including extra keycaps, a keycap puller, wrist rest and a manual are packed with the keyboard. For FPS and MOBA games, you get the appropriate keycaps that can be replaced with the default ones on the keyboard. Corsair has upgraded the wrist rest from the flimsy one we saw in the previous keyboards. The one on the K70 RGB MK.2 is sturdier and solid.

After the shift from CUE to iCUE, there hasn’t been much of a change to the UI. The changes were mostly around the capabilities of the software. It’s still one of the best software experiences for peripherals. Initially, the learning curve of using the software was difficult when the original CUE software had released. Moving forward, they have improved quite steadily. Because of the onboard memory in the K70 RGB MK.2, you can store up to three profiles on the keyboard. This means you don’t have to keep the software running in order to use lighting profiles or macros. You can customise macros, assignments and lighting effects individually to every key. These customisations can be saved to a single profile. 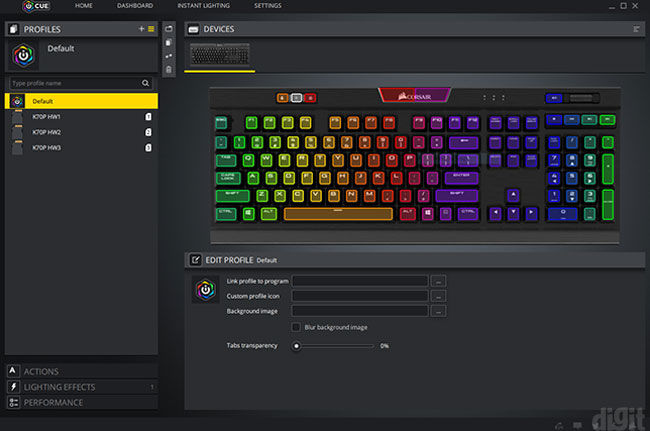 We liked the idea of the macro recording setting separated in a different tab for advanced functions such as action trigger and action repeat. You can easily record complex macros on the keyboard using a mouse or keyboard events and even combined. Along with locking the Windows key, you can also lock other key combinations like Alt + Tab and Alt + F4. You can also change the colour of the profile, brightness level and lock indicator buttons. 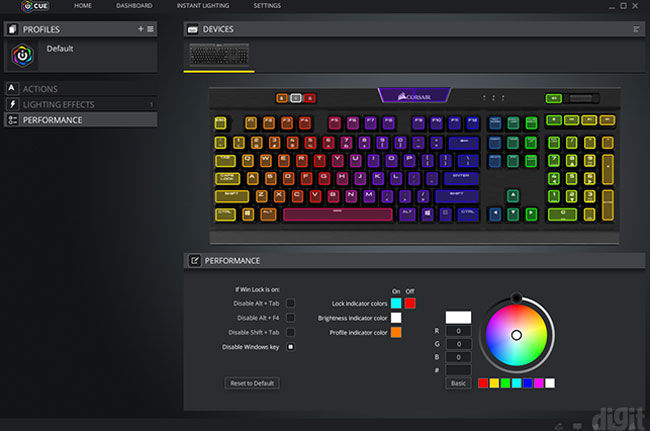 One thing we noticed with the software was something that we’ve observed in other software as well. Even though the profiles have been saved to the device and they’re active on the keyboard, opening iCUE sets the profile to default every time. We believe this feature is enabled across every peripheral software. However, it would be great if the software doesn’t automatically switch to the default profile whenever it’s opened. The software doesn’t override anything else on its own. After closing and opening the software multiple times, we found the keyboard retaining the onboard profiles without the software running. 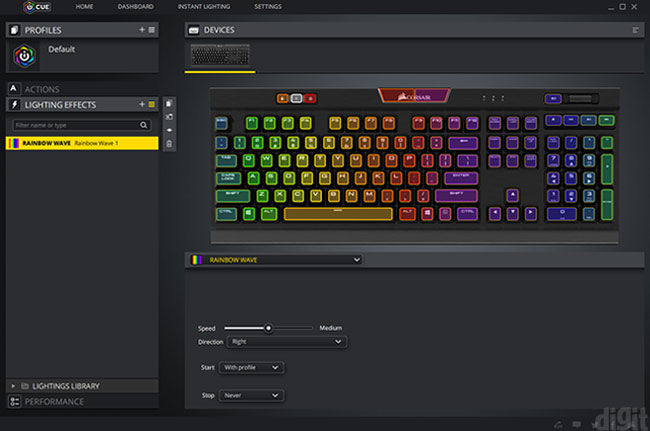 The chassis on the Corsair K70 RGB MK.2 is made of plastic with an aluminium frame on the top. This frame houses the mechanical switches while following an open design. An open design not only looks good but it’s also easier to reach and clean the switches. The surface has a brushed-aluminium finish which definitely looks good but catches a lot of dust. We didn’t notice any flex on the main chassis and overall, the body is quite sturdy. 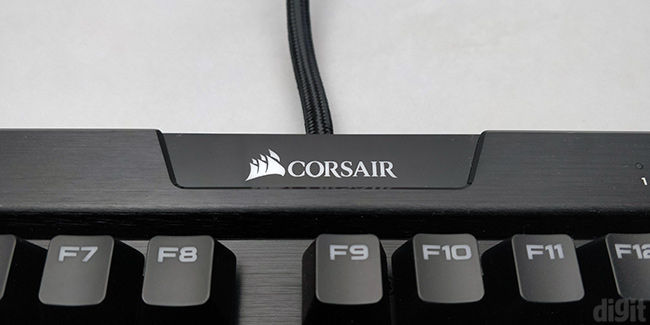 ABS plastic is used for the default keycaps with laser-etched legends. The font is wide and a little towards the gamer aesthetic. However, it isn’t overwhelming and since they are Cherry keycaps, you will be able to swap them out with aftermarket ones later. In the package, you are given extra keycaps for specific game genres. These keycaps are slightly different from the default ones because they are made of two parts. The keycaps are made of ABS plastic and the top layer comes off which has the legend laser-etched. With the top layer, Corsair is able to add some texture and an angle to make them distinguishable with touch. Budget keyboards priced as low as 3k have been packing double-shot moulded keycaps for a while now. We expect Corsair to follow the same and incorporate better quality keycaps in their high-end keyboards. It should also be noted that ABS keycaps aren’t of low quality. It’s just that double-shot moulded keycaps will ensure a longer lifespan of the legends. 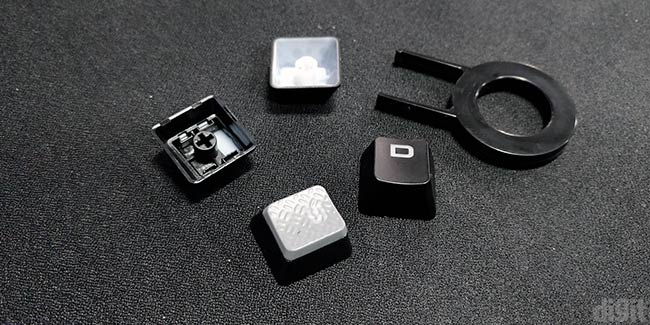 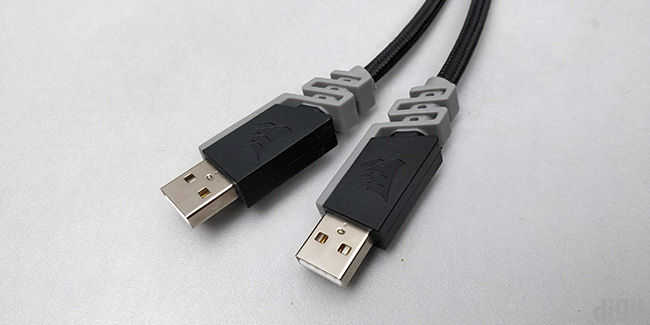 As already mentioned, the wrist rest on the K70 RGB MK.2 has been given a long-awaited update. Because of the thin wrist rest on the previous model, it used to rattle a lot and feel fragile while inserting or removing it. The rattling used to be persistent even while typing. The new wrist rest is bulkier and stays firm on the surface. However, it still attaches to the keyboard using plastic tabs. Mechanical keyboards from other brands have started moving to magnetic wrist rests. They are not only easy to install but there’s no scope of damage because of the absence of plastic tabs. Since the top frame of the keyboard is made of aluminium, it won’t be possible to attach anything with a magnet. However, a workaround can be made by adding a magnetic metal at the bottom edge for the wrist rest. Maybe we might see an incremental update for the wrist rest. 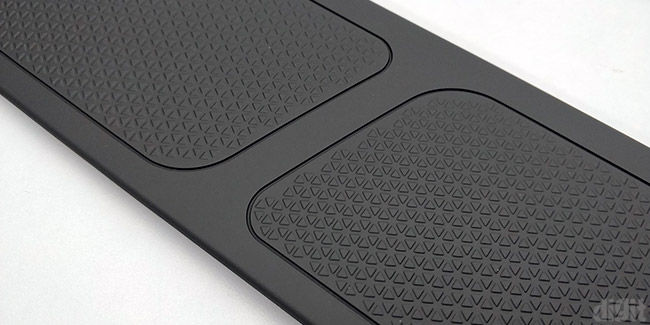 Before we get into the gaming part of the keyboard test, we verify the key rollover and whether chatter is observed using Switch Hitter. We found the keyboard displaying full N-key rollover. This has been the case for all the keyboards on the premium segment and we also see this present on certain gaming keyboards in the budget segment. 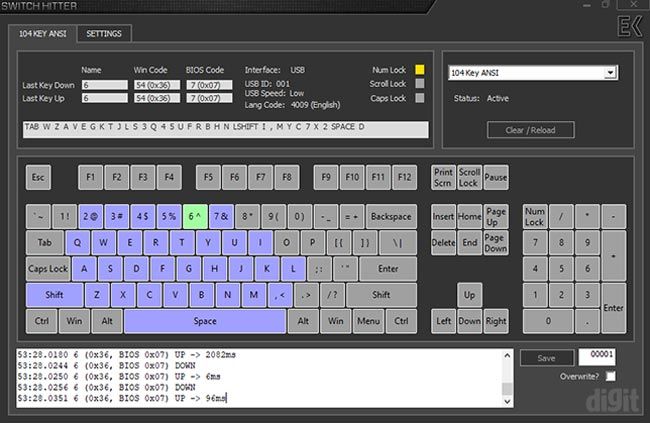 Keyboard chatter happens when multiple keystrokes are recorded by the same key on a single press. This usually starts happening over time in mechanical keyboards but some keyboards with poor firmware or low-quality switches might start displaying it right from the beginning. The Corsair K70 RGB MK.2 didn’t display any kind of chatter. 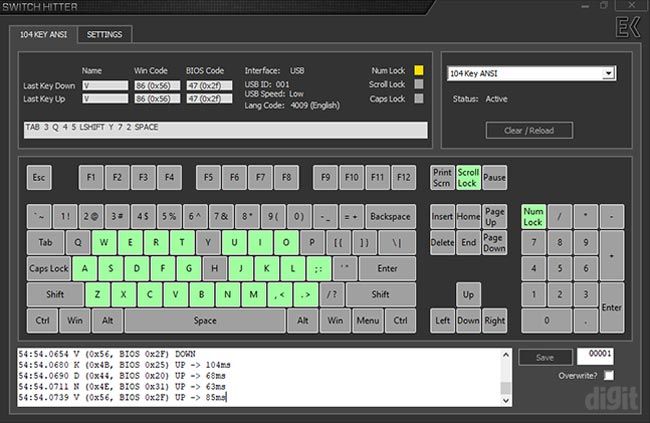 We played several games using this keyboard including FPS and MOBA games. There weren’t any problems while pressing the WASD keys together along with other keys. All our movements and actions were registered by the keyboard. We used several macro recordings as well in these games. Thanks to the capability of allowing multiple profiles, we could create different profiles for different games. Do note, you’ll have to switch between the profiles from the software if it’s running in the background. Otherwise, if you’ve saved the profiles on the keyboard, then you can switch between them using the dedicated button. 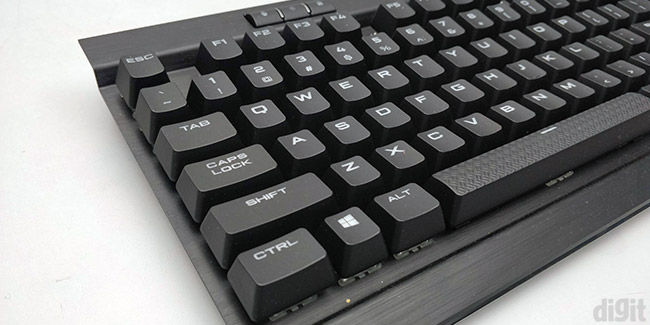 If you’re going to heavily use the keyboard for typing then you should consider the switch type. The best experience of typing on mechanical keyboards is usually on tactile switches like the Blues and Browns. They offer a satisfying tactile bump somewhere in the height of a key press. This prevents the need for bottoming out the keys while typing, resulting in reduced fatigue to the fingers. Of course, everything is completely based on your personal preferences. Hence, we continue recommending our readers to physically experience various types of mechanical switches before deciding their favourite