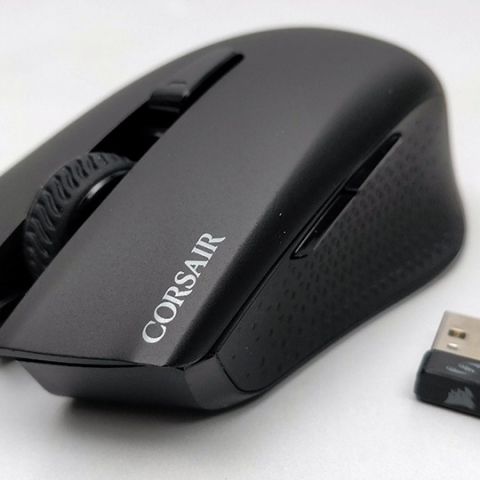 Wireless peripherals provide convenience to a great extent and the Corsair Harpoon RGB Wireless ensures that it offers useful features as well. Meant for small to medium hands, it will take care of both gaming and regular usage. The PMW3325 performs surprisingly good, coming on par with the Logitech HERO sensor that we tested on the Logitech G304 wireless mouse. It gives us the confidence to say that you can play FPS games competitively with wireless mice at this stage. You can go on for up to 60 hours on a single charge with this mouse, provided you’re using it in the Power Saving Mode. Otherwise, with RGB lighting turned on, you will get around 30 hours which isn’t that bad after all. There’s impressive build quality and although it’s lacking in features, it’s priced comparatively lower than other Corsair mice. From an overall take, the Corsair Harpoon RGB Wireless offers more software features and slightly better build quality than the G304. However, if you’re only looking at sensor performance, then you could pick any of them, whichever has a lower price.

2019 is probably going to be the year when more peripheral manufacturers introduce wireless versions of their existing products or completely new wireless peripherals. While Logitech has been spearheading the wireless peripheral category for a few years, other manufacturers have also started exploring this segment. In last year’s CES, Corsair released their own wireless mouse and keyboard. This year, it seems like they’re taking things seriously with new developments. Corsair Slipstream is the company’s new wireless technology standard that’s going to power their wireless products in the future. We’ll be explaining the new proprietary technology in more detail later. Corsair also announced the first product that will be taking advantage of this new technology with the Harpoon RGB Wireless. It’s a wireless version of the Harpoon RGB but with a different sensor while the rest of the design remains unchanged. 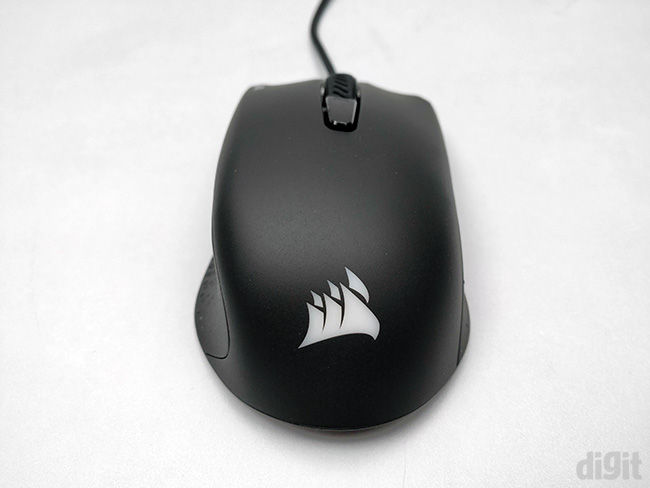 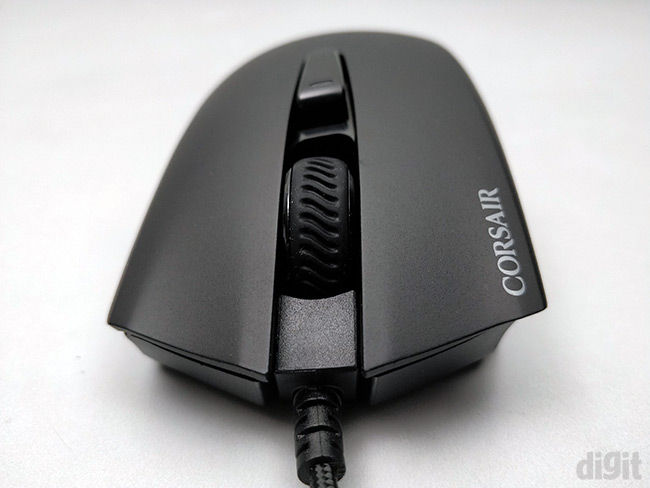 While the Corsair Harpoon RGB Wireless consists of several features, the most talked about feature is the new Slipstream wireless technology. Claimed to be twice as fast than the previous generation, the new technology has implemented Intelligent Frequency Shift (IFS). This enables the wireless device to keep scanning the wireless spectrum for faster channels. Since the scanning is always active, it will keep on hopping or switching to the fastest lane available every time, no matter how crowded the wireless traffic is in that particular room. The proprietary protocol layer design enables better signal strength and an ultra-long-range signal of up to 30m or 100ft (headsets only). The Harpoon RGB Wireless can be operated at a maximum distance of 33ft. Corsair says that it has an incredible response time of only 0.5 seconds between the peripheral and the receiver. Do note, this isn’t the same as the polling rate. For now, the Harpoon RGB Wireless is the only product under Slipstream. However, Corsair already has plans to release wireless headsets and keyboards supporting this technology. Another advantage of Slipstream is the feature to support multiple devices in a single receiver. Essentially, your keyboard, mouse and headset can be wirelessly connected to your system using just a single wireless receiver or dongle. 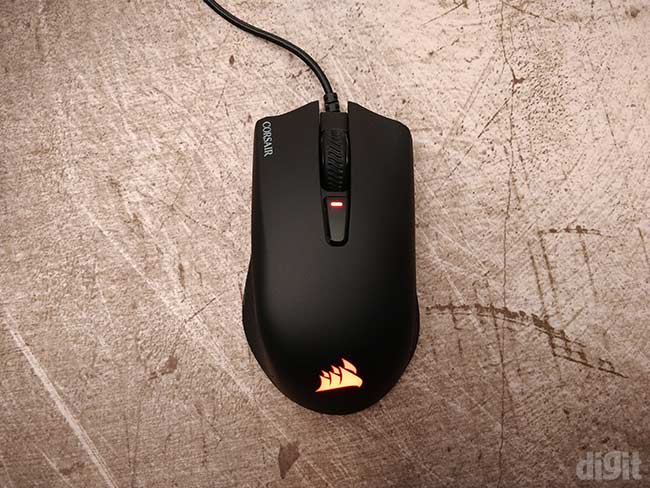 The Harpoon RGB Wireless packs in an 850mAh lithium-polymer battery inside. With all the RGB bling turned on, you will be able to enjoy about 30 hours of continuous usage. However, if you enable Power Saving Mode from the Corsair iCUE software, it will switch off the RGB lighting and you should be able to get up to 60 hours of usage. If you reduce the polling rate from 1000Hz to 500Hz or below, we believe you might be able to sustain longer usage. In the Bluetooth mode, you can get up to 40 hours of battery life. When the mouse’s battery is completely drained, it will take about two hours to fully charge. Switching between the 2.4GHz wireless and Bluetooth connection is made easy with the switch underneath the mouse. 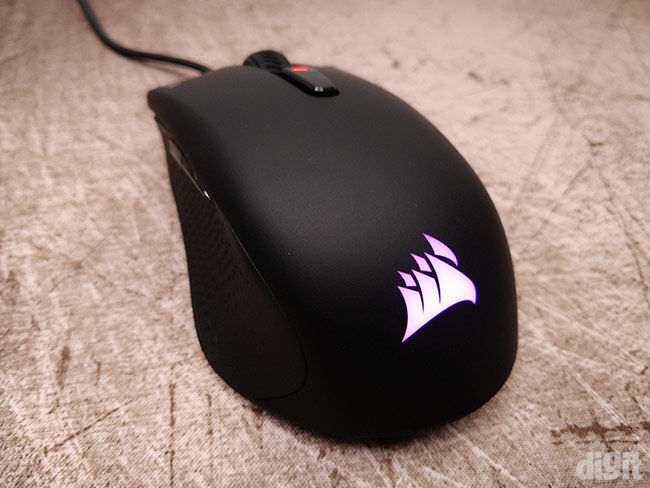 Earlier, the Harpoon RGB used the PMW3320 optical sensor and the upgraded wireless mouse is using a PMW3325 sensor. It can go up to a maximum of 10,000 DPI and up to five DPI levels can be assigned. You can set the values in increments of 100 DPI using iCUE. The mouse packs Omron switches for the left and right click buttons that have a durability of 50 million clicks. Apart from that, RGB lighting, macro recording, onboard profile storage and other such features are supported through iCUE. 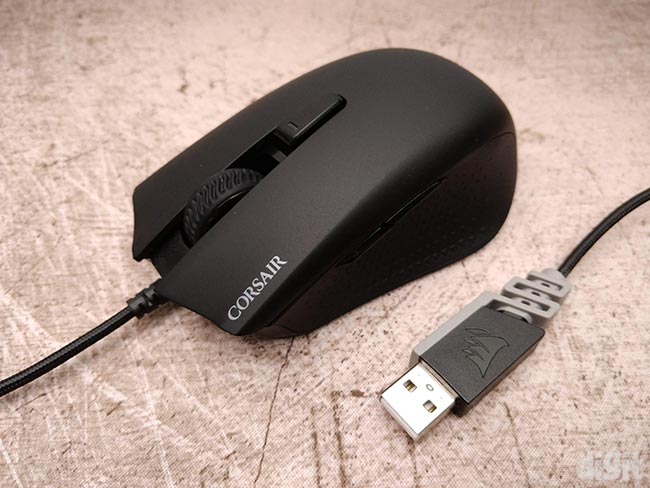 The Harpoon RGB Wireless didn’t go through a design change from its previous iteration. It’s still the small ergonomic mouse, favouring both palm and claw grips. Because of the small size, it’s best for people with small to medium hands. A slightly rough finish is present over the top part of the mouse, spanning from the left and right click buttons to the bottom portion. On the left and right sides, you will find a textured rubber padding that provides a suitable grip. Holding the mouse is comfortable owing to the satisfactory curves on the left and right side. The inner curve on the left allows you to place your thumb comfortably and close to the forward and backward buttons. For a palm grip, the curve on the right side enables better grip. 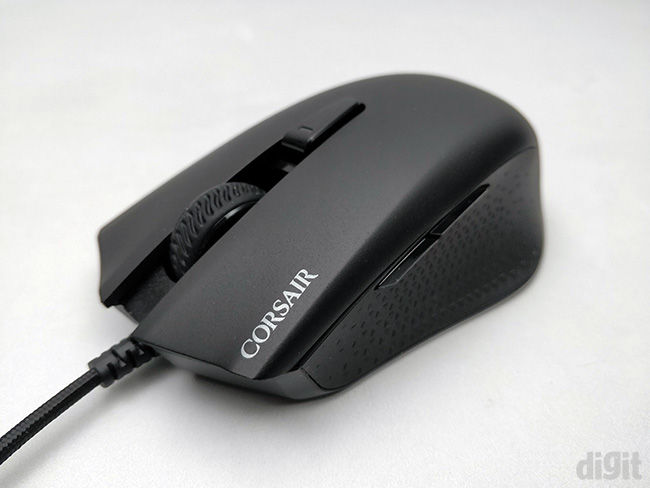 To toggle between the 2.4GHz wireless and Bluetooth modes, there’s a switch present below the mouse. You will also find the compartment where the USB dongle is stored. 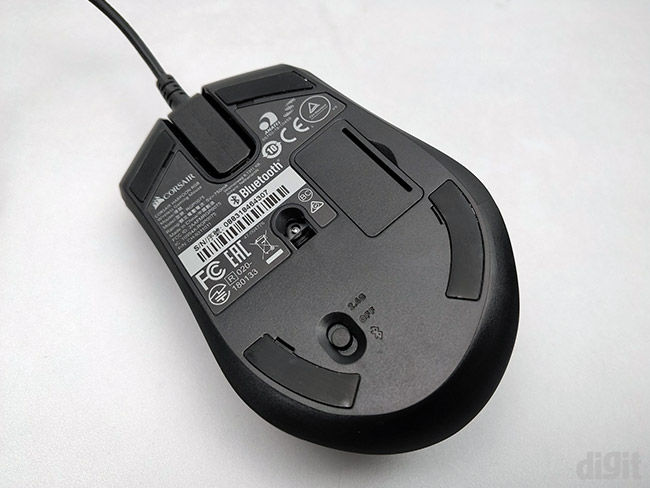 The Harpoon RGB Wireless operates in both wired and wireless mode. So, the micro-USB cable is detachable. However, because of the unique design of the micro-USB port on the mouse, you can only use the cable provided in the box to charge or use the mouse. 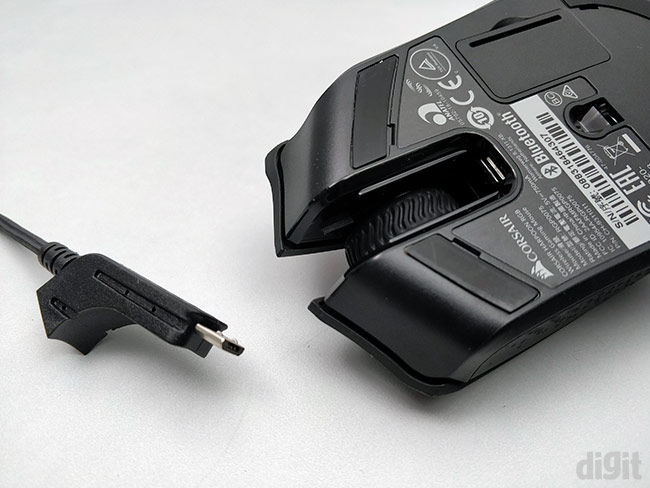 Opening the mouse was easy after removing the four screws beneath the PTFE feet. We come across the battery glued onto a top plastic layer. It can be easily pulled out but be careful not to use sharp objects in the process. Any form of puncture to the battery might lead to a fire hazard. 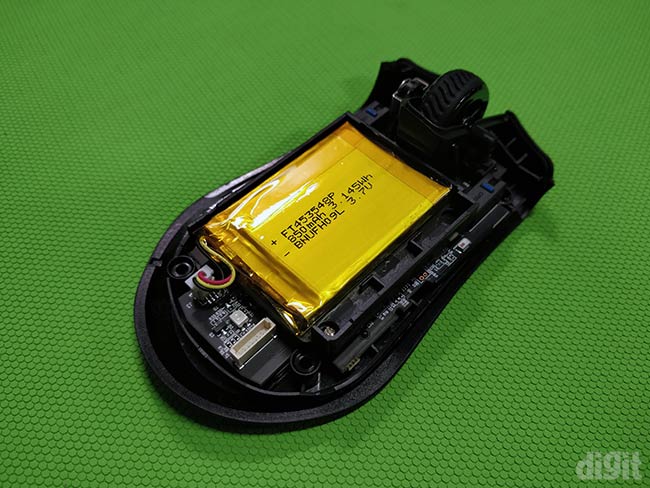 On removal of the battery and the top layer, you gain access to the main PCB with all the components. 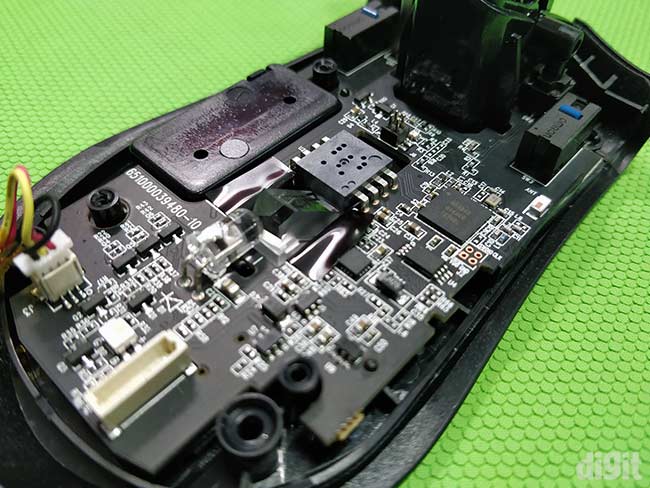 A secondary PCB is also present under the top part of the mouse where the DPI and forward and backward buttons are soldered. 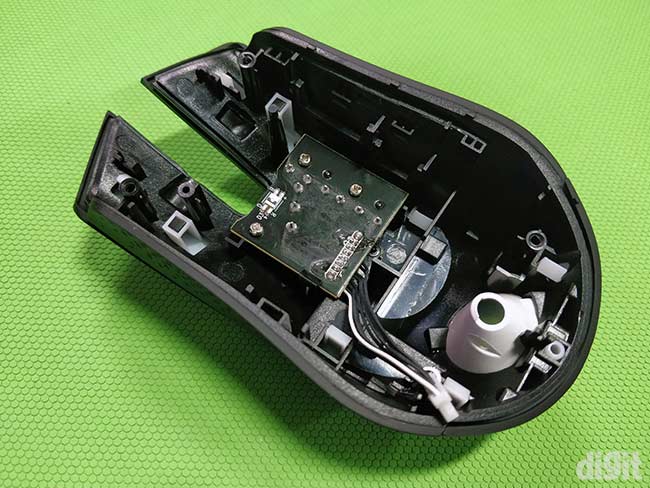 Right at the centre, we can see the PMW3325DB-TWMU sensor soldered without any protection or shielding. However, do note that the top layer containing the battery does offer some form of protection. 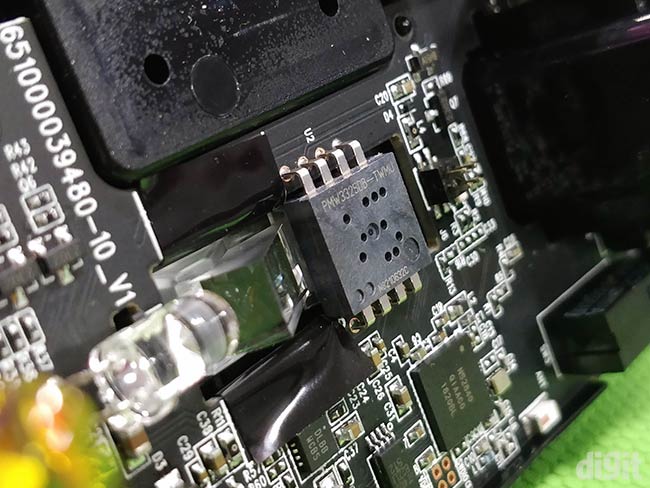 The Harpoon RGB Wireless uses the same Omron D2FC-F-K (50M) microswitches for the left and right click buttons used on the IRONCLAW RGB and M65 RGB Elite. Overall, the build quality inside and outside is decent to last for some rough handling over the years. 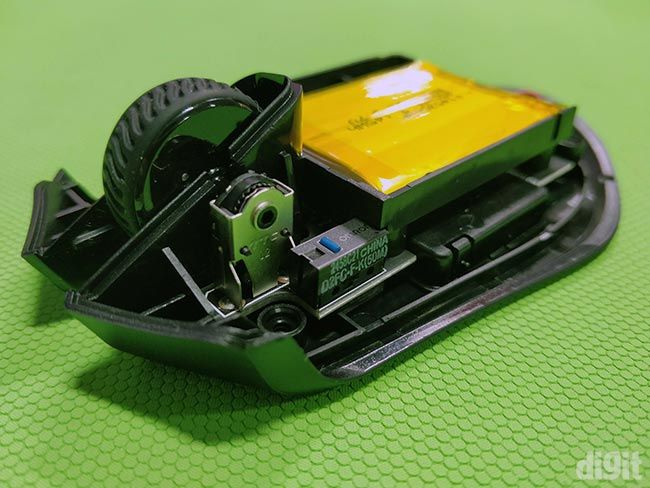 While testing wireless mice, we try to determine whether there is any form of anomaly generated by the sensor when it’s actively tracking. What happens is since the power is being delivered by the onboard battery to the sensor and the wireless transmitter, it could lead to issues if there’s any problem with power efficiency. Some mice support a wired connection along with wireless which gives us a better idea of whether there’s a difference in performance in the two modes. In our testing, we found the Harpoon RGB Wireless to perform almost the same in both the wired and wireless connection. So, playing games in the wired mode won’t give you any considerable step up in performance. 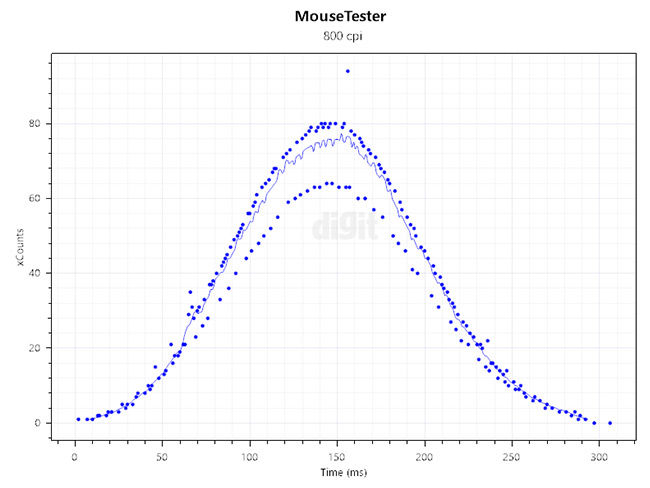 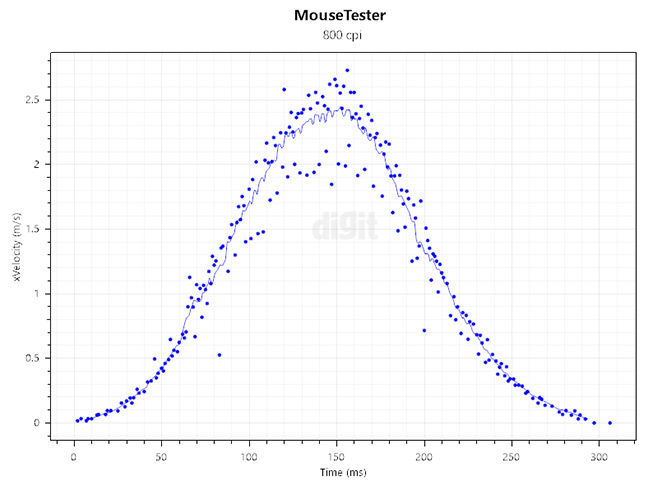 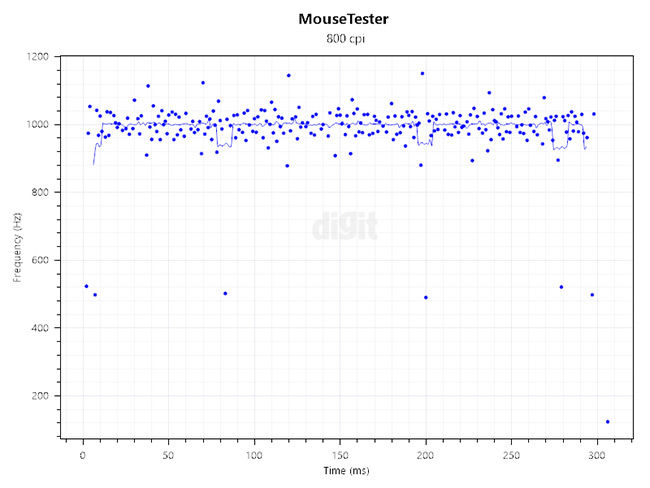 Although the MouseTester curve wasn’t perfect, it was impressive for a wireless mouse. In fact, the rise and descent of the curve had lower distortion than what we observed on the Corsair IRONCLAW RGB and M65 RGB Elite. The polling rate graph showed that as the CPI increases, the noise increases as well. However, the distortion or noise wasn’t as much as observed on the new PMW3391 sensor. We confirmed this on Enotus Mouse Test and found the smoothness percentage to be comparatively better. Speaking of real-world performance, you can play any kind of game with this mouse without worrying about its tracking. It doesn’t spin out nor does it display any kind of acceleration. Just like the other two Corsair mice, it has a high lift-off distance of around three DVDs. This is higher than normal and considering the lightweight design, users will be bound the lift the mouse while gaming that might hinder with their gameplay. Overall, you can be assured that the mouse won’t fall back in any aspect when it comes to being a worthy peripheral while gaming.