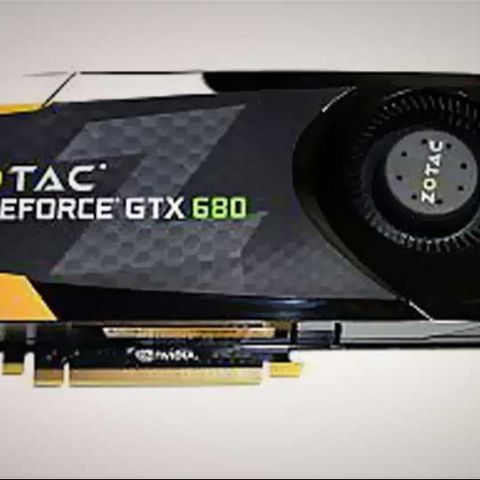 The performance scores skew in favour of ZOTAC GeForce GTX 680. When it comes to pricing, the ASUS Radeon HD 7970 is priced at a whopping Rs. 38,000 whereas the ZOTAC GTX 680 comes at a sweet pricing or Rs. 32,999. The huge difference in pricing and performance scores make the winner quite evident. The card to win this battle is the ZOTAC GeForce GTX 680 and for those looking to get the highest end single GPU based card, we feel the choice has already been made to go for the GTX 680.

The long wait for the next-gen NVIDIA graphics card series is finally over. NVIDIA announced its flagship single-GPU based graphics card in the new GTX 600 series day before yesterday. The new GPU is codenamed Kepler and it improves upon the Fermi GPUs.

ZOTAC was kind enough to send us the ZOTAC GeForce GTX 680 card for review. We couldn't wait to try it out, specially since the AMD flagship card had scored better than NVIDIA's GTX 580 in most benchmarks.

Let us first try to understand what is under the hood of the card.

One of the main reasons behind a jump in the number of CUDA cores is that NVIDIA have decided to do away with the shader clock unit completely. In the Fermi architecture, the shader clock operated at twice the base clock speed. So instead of having lesser number of higher clocked units, NVIDIA now has more lower clocked units. In Kepler GPU, you have a single base clock called the Graphics clock which at 1008 MHz on which all the functional units within the GPU run at.

Visit page two to read on about the GTX 680's new features, our test setup, and benchmarks..

The packaging is very straightforward and minimal to an extent. Surprisingly there are no images on the front face of the box. Once you open the box you are treated with the ZOTAC GTX 680 card where you see very little ZOTAC styling (remember GTX 560Ti AMP Edition) element apart from the yellow colour.

The box includes the driver CD, power cables, documentation and a trial software with a 3-day pass for Trackmania.

There are two SLI connectors on the top of this card. On the extreme right hand side you have the two 6-pin connectors.

On opening the shroud you see a heatsink made of aluminium fins which is placed beside the fan section. Beneath the heatsink are three pipes connected to the copper GPU block which drives the heat away from the GPU.

The ZOTAC GTX 680 has around four display ports namely two dual-link DVI ports, an HDMI 1.4a port and a DisplayPort. This allows you to connect up to four displays to a single GTX 680 card.

Visit page three to read on about the GTX 680's new features, our test setup, and benchmarks..

NVIDIA GPU Boost technology works in the backgound and dynamically boosts clock speeds based on the workload of the game and the headroom available. It not only changes the clock frequency but also the GPU voltage. In principle it looks somewhat similar to Intel's Turbo Boost technology.

Since it takes measurements coming from the GPUs sensor, the headroom available on every game will be different, hence the GPU Boost offered will vary from one game to the other. You can still overclock the GPU by adjusting the base clock speeds.

We are all familiar with Vsync which sets a game's frame rate to 60Hz to prevent tearing on screen due to higher frame rates. So the game runs at a rate of 60 fps. However, if the frame-rate of the game falls below 60 FPS, then it will drop to 30 FPS and stay there till the game runs comfortably above 60 FPS again. This leads to a stutter in the display and the experience is annoying.

With Adaptive Vsync present with the GTX 600 series of cards, even if you enable Vsync, as soon as the frame rate drops below 60 FPS, the the Vsync will automatically switch off, till the frame rates go above 60 FPS. This way there is no sudden drop of frame rates from 60 FPS to 30FPS. There is a gradual drop below 60FPS till the Vsync is switched off and then later when the frame rate normalises, the Vsync switches on again, thereby leading to a stutter-free gaming experience.

NVIDIA Control panel will now give you an option to adjust the FXAA settings at any point of time, thereby bypassing in-game options. Another AA feature introduced with the GTX 680 is called TXAA. There are two levels - TXAA 1 and TXAA 2 and according to Nvidia, with TXAA 1 enabled you can get an image quality similar to 8x MSAA but with a performance hit equivalent to 2x MSAA.

On the other hand TXAA 2 will give you the image quality better than 8x MSAA with a performance hit equivalent to 4x MSAA.

It has four display out ports - 2xHDMI, 1xDVI and 1xDisplayPort, so you can connect a 3-monitor system for gaming and have one monitor for your work. Also 3D Vision Surround Sound can be supported on a single GTX 680.

Visit page four to read on about the GTX 680's our test setup, benchmarks, and verdict...

Synthetic Tests
3D Mark 11
This is an ideal benchmark for measuring the DX 11 benchmark performance. It has a a combination of graphics tests, Physics tests, audio-visual demos etc. which stress your graphics card.

The GTX 680 is higher than both cards in terms of overall scores in all the three modes of the 3D mark 11 operation. Only at the Extreme level does the difference come very close.

Unigine Heaven 2.5
This is another synthetic benchmark which allows various levels of tessellation along with the standard AA and AF adjustments. It uses the Unigine game engine. When run in the DX11 mode, it makes use of the tessellation technology as well as advanced screen-space ambient occlusion (SSAO).

Just like it was seen in 3D Mark 11, the ASUS HD 7970 edges past the GTX 680 at the absolute maximum levels. However, at medium settings the GTX 680 pulls up its socks and maintains the lead across all remaining benchmarks.

As is seen from the scores above, the GTX 680 card emerged victorious in most of the benchmarks except for Resident Evil 5 and Alien Vs Predator. In STALKER: Call of Pripyat which is our favourite DX11 benchmark, the GTX 680 was almost 20 FPS faster than HD 7970 is most settings.

In fact when we compared it with the ZOTAC GTX 580 AMP! Edition, we still got scores in excess of 25 to 30 FPS in all the gaming benchmarks. So, performance-wise, it is a huge improvement over the GTX 580.

Verdict:
The performance scores skew in favour of ZOTAC GeForce GTX 680. When it comes to pricing, the ASUS Radeon HD 7970 is priced at a whopping Rs. 38,000 whereas the ZOTAC GTX 680 comes at a sweet pricing or Rs. 32,999. The huge difference in pricing and performance scores make the winner quite evident. The card to win this battle is the ZOTAC GeForce GTX 680 and for those looking to get the highest end single GPU based card, we feel the choice has already been made to go for the GTX 680.