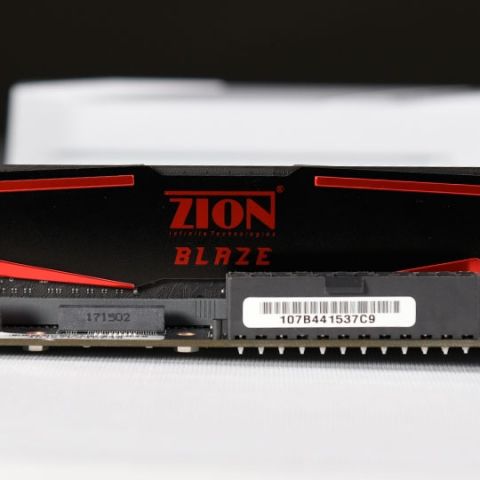 The Zion Blaze series might be rebadged HK Hynix modules but they do perform quite well for the price. There’s nothing exceptional about these modules and we surely wouldn’t call them enthusiast grade. Overall, let's just say these are above average at best.

Zion is a homegrown brand which has been around for about 20 years now. While they did primarily serve the OEM market for a long time, they’d ventured into the consumer space and their modules have been selling for quite some time. The Blaze series is their DRAM line-up which is supposed to appeal to the enthusiasts and gamers. For the purpose of this review, we received two Zion Blaze DDR4 8 GB DIMMs which are rated for 2400 MHz and have heat spreaders on them. 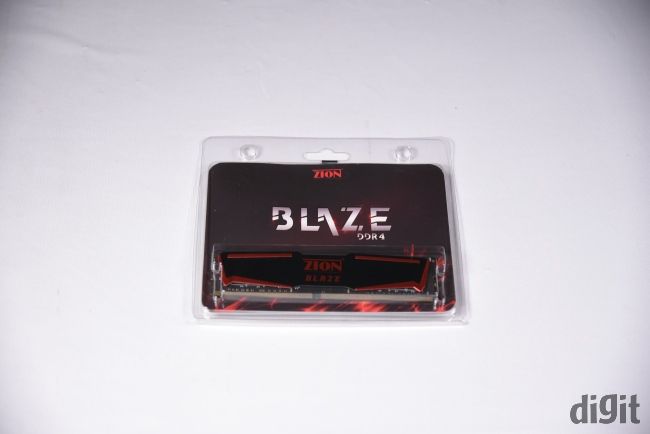 From an aesthetics standpoint, the Zion Blaze series has a pretty standard red and black colour scheme on the heatspreader which resembles a stretched out batarang. The heat spreader is made out of aluminium but the thickness… well the thinness is concerning. It’s barely a millimeter thick and it’s affixed to the memory modules using double sided film tape. This is the first time we’re seeing double sided film tape being used instead of thermal pad so heat conductivity is something we’ll have to check. Since the double sided film tape is really thin, there should be a fair amount of heat being conducted to the heatsink but the fact remains that the heatsink itself is very thin to begin with. 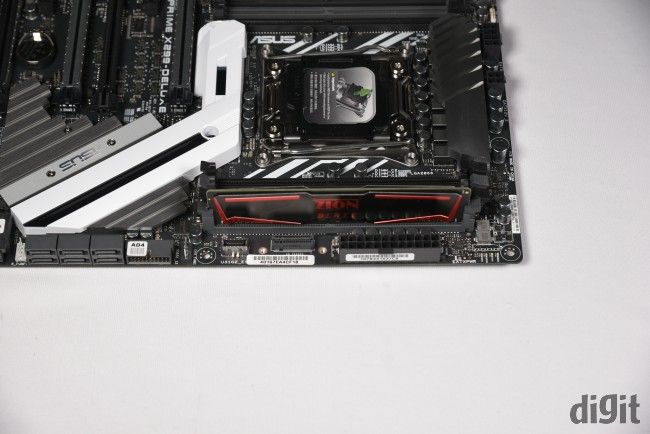 Each DIMM consists of 16 SDRAM chips which are, in this case, from HK Hynix. The H5AN4G8NAFR are 4Gb CMOS DDR4 SDRAM chips with CAS latency that can be set between 9-to-20. Going by the TF suffix, these chips are rated for 2133 MHz which have been clocked higher to hit 2400 MHz. As for the SPD, we really can’t identify the IC based on the markings. One thing we can say is that these are HK Hynix OEM units with the part number HMA41GS6AFR8N. CPU-Z reports HMA41G56AFR8N which isn’t a valid part number but once you flip the 5 into an S, you land upon the HMA41GS6AFR8N. 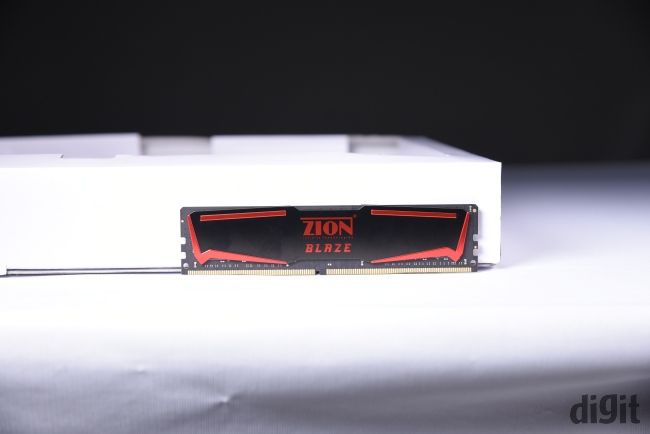 For our benchmarks, we used the following configuration:

The Zion Blaze 8 GB 2400 MHz modules are thus, rebranded SK Hynix units which also means messing with the SPD data in its entirety will be a pain in the rear end since SK tends to write-protect the SPD. And when we tried to read the SPD, we experienced a similar issue. We wouldn’t say that these modules cater to the enthusiasts in this case. Enthusiasts prefer high-end B-die kits with SPDs that can be easily reprogrammed to suit their needs. 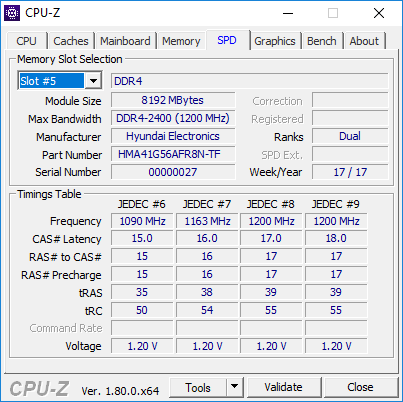 We started off with the AIDA64 Memory Benchmark with the RAM set to its default 2400 MHz with the memory timings at the default 17-17-17-39. There are no other profiles in the memory so that’s all you get with the Zion Blaze.

Next up was using Super Pi to check how well the Zion Blaze compared to some of the other memory kits that we have. At 470.9 seconds, we’re looking at a kit that’s pretty much at par with most RAM kits out there. Also, since we remember the heatsink is rather flimsy on this kit, we decided to risk our fingers while the Super Pi test was running to see how hot it got. Suffice to say our fingers are completely safe but boy did the DIMM run hot at 3000 MHz. 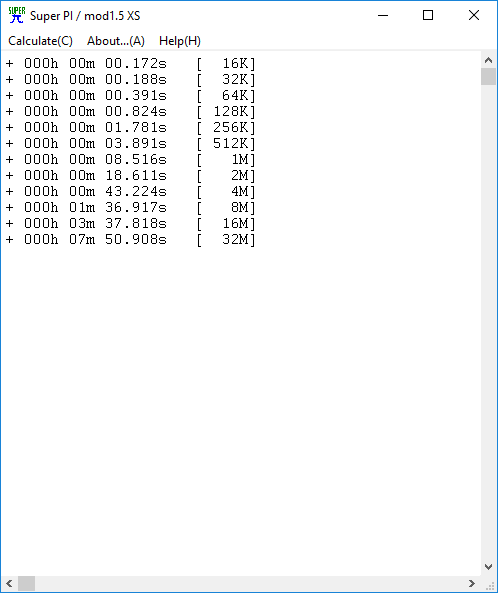 Since the packaging mentioned that these kits have plenty of room for overclocking, we had to try it out. We began with the DIMMs set to their base frequency and ran AIDA64 which takes quite a lot of time to complete. Once we hit our peak speeds, we ran the system for a lot longer to check for stability as well. Here’s how the kit scored at 2400 MHz. 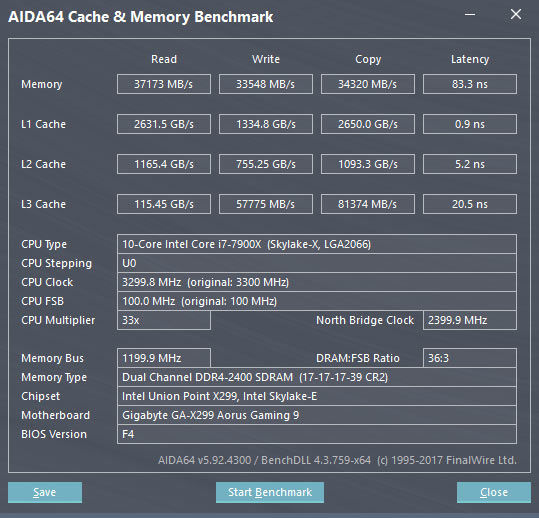 With the voltage set to 1.2V, we could get the clock all the way up to 2800 MHz but we had problems with the benchmark runs conking off mid-way. So we bumped up the voltage to 1.25V and had a much better performance.

The next step was to take it to 3000MHz, we easily managed to get to that done with another voltage bump, this time bringing it up to 1.3V. AIDA64 ran without any issues and we had the system running for a couple of hours without any issue. This resulted in an 18% increase in Memory Read speeds and Memory Write speeds went up by 20.6%. These are pretty great returns for a memory kit. 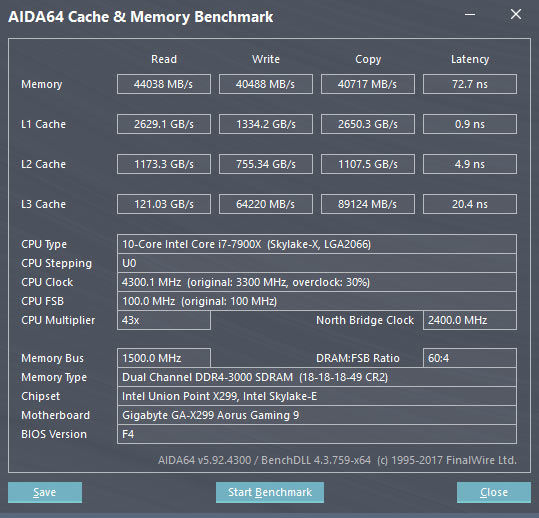 Our next target was 3200 MHz and that’s where we hit a roadblock. Increasing the DRAM voltage to 1.4V did not help. The system would boot but the RAM would downclock to its reference clock speed of 2400MHz. So we increased the DRAM voltage in minor increments to see when it would finally achieve 3200 MHz. Unfortunately, even at 1.47V, these units did not get to 3200 MHz. So that’s where we’re stuck with the Zion Blaze.

The Zion Blaze series might be rebadged HK Hynix modules but they do perform quite well for the price. There’s nothing exceptional about these modules and we surely wouldn’t call them enthusiast grade. We couldn’t care for RGB but the SPD needs to be reprogrammable. Also, in our overclocking test we could take it up to 3000 MHz with a voltage level of 1.3V which is pretty decent as well. What we didn’t like are the heatsinks which are way too thin to be called so and the thermal interface being double sided film wasn’t helping when we started overclocking the unit. Overall, these are above average at best. The pricing is higher than value oriented RAM DIMMs from Avexir, Corsair, G.Skill, ADATA and Kingston so these aren't economically priced either.