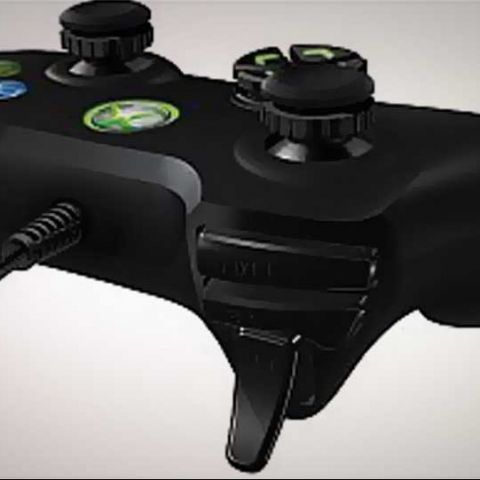 The Razer Onza TE is a replacement XBOX360 controller from, you guessed it, Razer. Featuring 2 extra programmable buttons, as well as adjustable tension analogue sticks and backlit face buttons, this does seem like a very nice package. However, at more than double the price of the original controller, the Onza is just not worth the premium it demands.

The Razer Onza TE is a very nice controller. It looks very cool, especially with the back-lit keys, and it also does feel very good in the hand. The D-Pad has been redesigned to now have 4 individual buttons as opposed to the single, tilting D-pad on the default controller. This design, while a decent attempt to address the flaws in the original D-pad design, is not good enough. The travel on the keys is way too much to be comfortable to use, especially in arcade games and fighting games such as Street Fighter IV. This problem has been better addressed by Microsoft themselves with the updated controller featuring a transforming D-pad.

The layout of the keys hasn't been changed, except for the “back” and “start” keys, which have been inexplicably moved back, behind the D-pad. The original layout was more comfortable but this is not a serious issue. Coming to the triggers, the triggers of the Onza have been designed to look like actual pistol triggers. While this is a nice design visually, it doesn't really add to the functionality of the device. In fact, we found that using the trigger was more painful after prolonged use, especially so in the case of racing games where you are required to keep at least one of the triggers depressed for the duration of the race. A more level-headed user, who doesn't get caught up in the heat of the moment (hah!) might actually find the triggers more useful as their greater length ensures a finer degree of control.

The face-buttons of the Onza are a real pleasure to use. They are proper mechanical buttons unlike the membrane buttons Microsoft uses and have a very nice clickety feel to them with very tactile feedback. Its not that the default controller has bad buttons, its just that these buttons feel better to use. Being back-lit is a bonus as well. The analogue sticks on the Onza feature adjustable resistance to improve control. This is done via a ring situated beneath the head of each stick. Turning the dial increases or decreases the resistance to movement of the 2 sticks rather than actually adjusting the sensitivity. This, we assume, is meant to give players finer control in FPS games.

[RELATED_ARTICLE]The 2 programmable buttons on the controller are present above the left and right brackets. You program them by pressing a button corresponding to the left or right button beneath the controller, and then pressing the button you wish to remap. This is a useful feature and it is convenient to remap certain hard to press buttons such as the analogue stick buttons. The cable on this controller is extremely long, 15 feet to be precise and actually longer than that of the default controller. The cable is, also, a lightweight, braided cable and of much better quality and includes the quick-release contraption in-case someone trips over the cable. It would have been nice to have a wireless controller, but Microsoft's licensing issues means that this is something we cannot expect of any 3rd party XBOX controller at the moment.

One very big drawback of this controller is the force-feedback, we don't know if it is a problem specific to our test piece, but the force-feedback was abysmal. The feedback in Dirt 3 felt more like the anemic wheezing of an aged squirrel than that of a 500bhp Subaru flying over rugged terrain!

At Rs. 3,499, the Razer Onza TE is a very expensive piece of kit, The default controller retails at barely Rs.1500 or less and is, quite frankly, extremely well suited to its task and does not need such an expensive replacement. Considering that the wireless controller from Microsoft also retails for less than the price of the Onza, this does seem like a very bad deal. The controller is a very nice device with good build quality, but other than looking really cool, it doesn't have much else to offer. It has a lot of potential, but the price, and some bad design decisions really pull it down. What would really make this controller worthwhile would be a driver CD for Windows allowing complete customization of the entire controller.