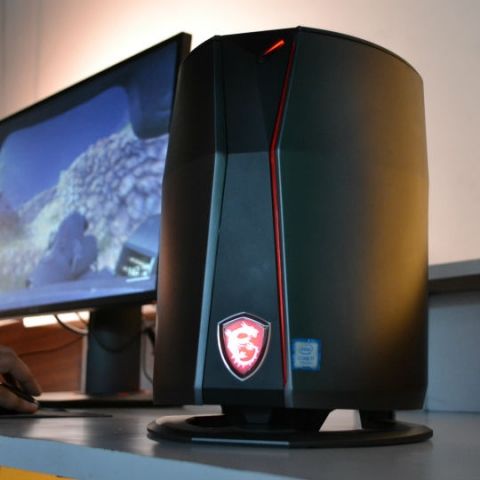 The MSI Vortex G65 is a one of a kind gaming PC. It has the performance, the looks, but comes at a steep price. While you can build a cheaper gaming PC, which will provide better performance, it wouldn't look half as good.

I have been a PC gamer for as far back as I can remember. I have watched the PC industry shift from 32MB of RAM to 32GB. I have also witnessed the evolution of computer graphics, from the blocky character models of Roadrash to the super realistic textures of Battlefield 1. However, in the last quarter century, the humble PC gaming tower has remained primarily the same. It became smaller over time, but it the squarish guise has remained more or less the same, until last year when MSI introduced this, the Vortex.

To be fair, this is not really an original design since Apple already made a cylindrical PC back in 2013, with the Mac Pro. However, Apple would be the first to point out that the Mac Pro is a Mac, not a PC. The Vortex, however is not just a PC, but a gaming PC at that. It has the same upgradability restrictions as the Mac Pro, but the Vortex packs more powerful hardware in this cylindrical chassis.

I was a little skeptical on the whole cylindrical design, especially after Apple admitted how they “designed themselves into a thermal corner”, with the 2013 Mac Pro. I must admit, I was sort of prejudiced before I even started this review, but after using the Vortex for almost a month, I am quite convinced that MSI did its homework well. 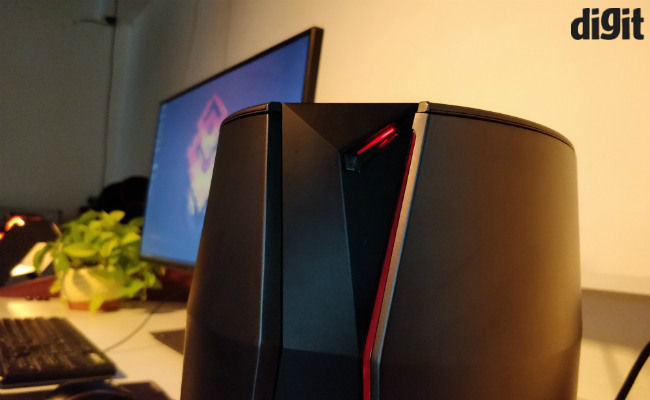 Build and Design: Trashcan done right
The cylindrical design does suggest an Apple Mac Pro lineage, but MSI has changed some things to incorporate all that top shelf gaming hardware into a reasonably tiny 6.5L chassis. The outside shell is made out of a plastic composite and feels metallic to touch. It seems durable as well, although only long term users will be able to shed more light on that.

If we talk about aesthetics, the Vortex G65 is not exactly symmetrically cylindrical, like the “trash can”, and has slightly accentuated creases around the body. The front, back and even the top area is illuminated with RGB lighting, which is user controllable via software or using the MSI Dragon app, adding to its...umm...swag value. 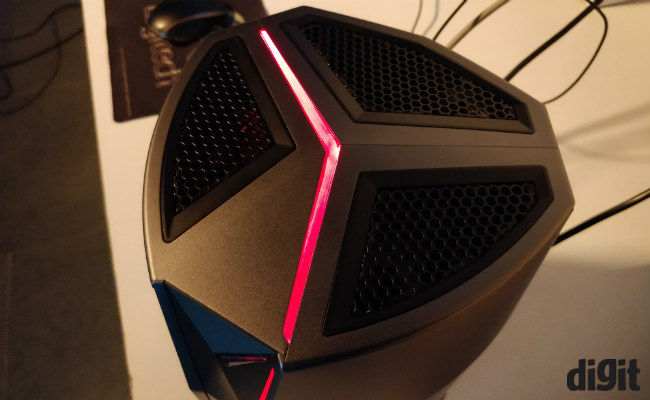 While the outside of the desktop looks absolutely amazing, what is far more awe-inspiring is how hardware is packed inside. The internal layout of the Vortex resembles a similar assembly to the 2013 Mac Pro, with its custom 450W 80 plus gold PSU, fixed in the middle of the triangular frame. It is flanked by the CPU on one side, while the other has the custom, yet still desktop grade, NVIDIA GeForce GTX 1080 GPU. The third side of the triangular frame carries the two NVMe SDDs, which come pre-configured in RAID4. This third side of the frame can actually house a second GPU, as in some markets the machine is sold with two NVIDIA GPUs in SLI. In India it is repurposed for the SSDs. 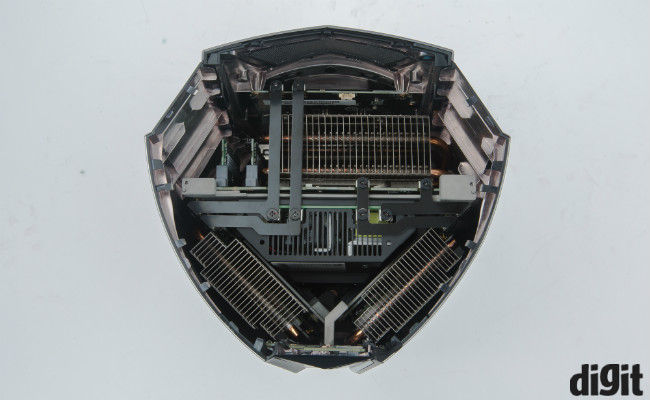 MSI has designed a custom logic board that is broken down into three major boards. The main board holds the CPU and RAM slots, another sits at the back, enabling all the back panel I/O, plus the rear mounted hard drive. Lastly, there is a third logic board that sits in the base, drawing power from the PSU. This connects to the main logic board, carrying the CPU and RAM, to the GPU via a custom PCI x16 connector and the rear I/O via ribbon cables. The SSDs also connect to the bottom board through an MXM connector to the PCIe slot. In essence, it is a complete nerd fest under the hood, but at the same time means that the motherboard are GPU is non user replaceable. Also, even though MSI allows users to replace the CPU, you can’t just put any CPU in there. The custom heatsink and cooling may not do justice to just any CPU. 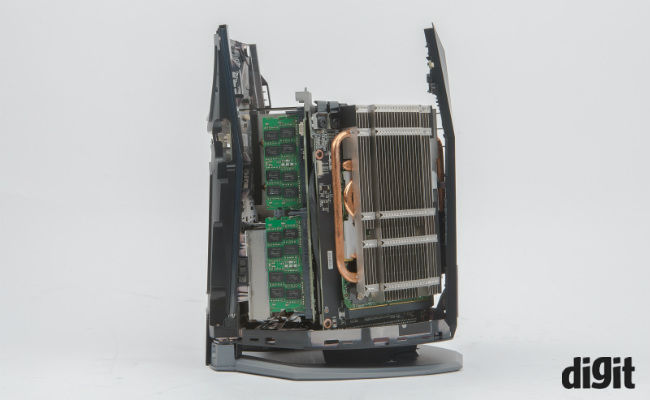 Talking about cooling, the entire chassis is solely cooled by a single fan at the top and from what I have observed, it does a really good job at cooling the unit. I will talk about the cooling efficiency in the performance section.

I/O: Clean and clinical
To go with the whole design, MSI got rid of the front I/O, which is a double-edged sword. The decision makes sense from a design point of view, as the Vortex looks more aesthetically pleasing this way. However, at the same time, I had to pick the whole unit up whenever I wanted to plug in a pen drive. You pick up the unit, place it on the side and then put the drive in the appropriate slot. 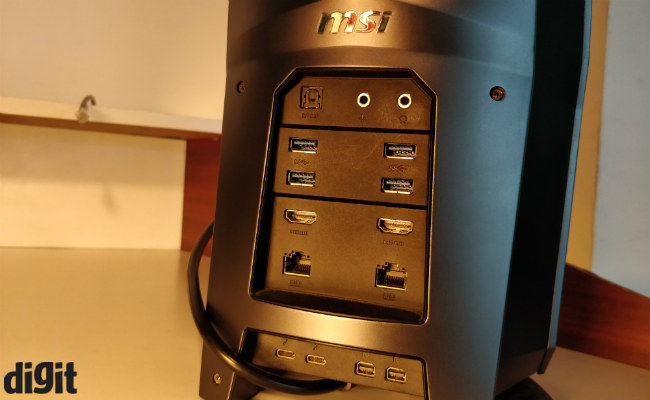 However, besides this small inconvenience, I am pretty happy with the rear I/O selection of the unit. Starting at the top, you get an optical Sound in port, standard 3.5mm headphone out and mic in jacks. There are also 4 USB 3.0 ports, 2 HDMI out ports, 2 Killer ethernet ports, along with Killer WiFi. In addition, there are two mini display ports, along with two Thunderbolt 3 ports that support 4K@60fps. If you are counting, the MSI Vortex G65 can support 6 displays at a time, and I have seen it do so in person.

Performance: Hitting the sweet spot
The MSI Vortex G65 has an extremely powerful resume and the performance figures are in line with that. The Intel core 7700K combined with the NVIDIA GeForce GTX 1080 allows the user to play all its favourite games at the highest settings in 1080p. The machine will also run all AAA titles and demanding games in 2K effortlessly. To ensure optimal performance on 2k, it is better to have a G-Sync ready monitor, that will allow for consistent frame rates across games respectively.

Games like Battlefield 1 ran flawlessly in 1080p, pushing 80+ fps with DX12 enabled at ultra settings, without any hiccups. Going up to 2K resolution, the fps counter averaged at 58fps at ultra settings. It was only when I switched to a 4K display that the FPS counter tumbled down to below 50fps. However, even at 4K, the machine maintained an average frame rate of 46fps. More recent games like Dishonored 2 also ran smoothly, chugging out more than 60fps even at 4K. I also tested some older titles, such as Metro Last light, which also ran happily at 125fps and 95fps, at 1080p and 2K resolutions respectively.

The Vortex’s powerful performance is further seconded by the synthetic benchmark figures. The machine scored 6029 points on PCMark 8 Creative. It performed quite well on Cinebench 15, which is a good test for graphics performance. The Vortex scored 150.65fps.

All this performance is derived out of a machine that is cooled by a single fan only, mounted at the top of the MSI Vortex, which cools everything inside the machine. To counter the heat, there is a vapor chamber right on top of the two main components - CPU and GPU. These vapour chambers spread the heat to the heat spreaders, running along the entire length of both the GPU and CPU. The system sucks cool air from the bottom and throws hot air out of the top, taking that heat off the heat spreaders.

At full loads, the CPU maintained temperatures around 96 degree celsius, with the GPU hitting 80 degrees. While the GPU did not show any signs of faltering, I did find the the CPU being throttled down about 200-250MHz. However, it did not seem to have any immediate effects on the gaming performance of the machine. The desktop also supports overclocking of both the GPU and CPU, which seems like a stretch without a water-cooled CPU. But after stress testing the Vortex for over an hour, I am convinced that the MSI’s “Storm cooling” trick works. In addition, the single fan remains unbelievably silent even at higher loads.

All the overclocking, system monitoring, RGB toggles can be done via the Dragon Centre application, which comes pre-installed in the machine and is quite easy to use. However, I would suggest you read the instructions before you proceed. Moreover, like all previous MSI laptops we tested, the app on this machine can also be logged into via a phone app as well.

Bottomline
The MSI Vortex G65 is a one of a kind gaming PC. It is small, cylindrical and unlike any other gaming PC you may have seen. However, for all its curved looks and RGB studded glory, you have to pay a premium. That said, the system can run circles around all kinds of processor intensive tasks and can run even the most demanding games at 1080p and 2K resolutions, without any issues. Gaming in 4K is also possible and all games would work well, but if you are looking for 60fps in 4K gaming, then this is not the machine for you.

How it compares
The biggest competitor to the MSI Vortex G65 VR is the Asus ROG G20CB, which is another small pre-configured NVIDIA GeForce GTX 1080 powered PC, available off the shelf. It features pretty much the same hardware and is cheaper too. However, the G20CB misses out on some key I/O ports and is not as overclockable as the Vortex. 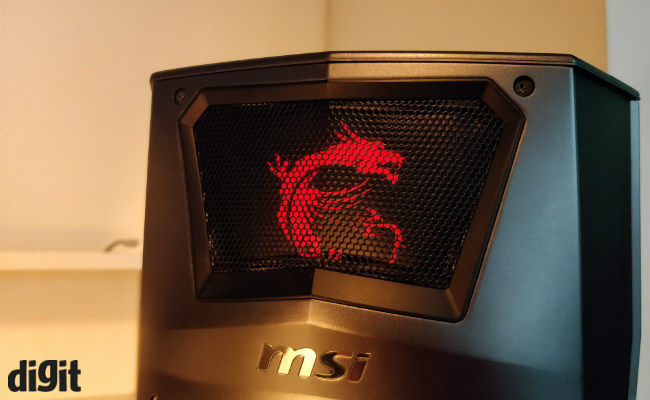 This means, that the synthetic benchmark scores are marginally higher than the Asus ROG G20CB. I presume that the higher performance from the Vortex could be due to newer drivers and the fact that it runs the latest version of Windows 10, but admittedly I’m a bit uncertain about that at the moment.

Moreover, you can definitely get better performance out of an assembled custom PC with off the shelf parts. That would be advisable if you are looking to overclock, and cheaper to build as well. However, you won't get the small footprint and the swag factor the Vortex G65 comes with, which is something you can only get by paying the premium.