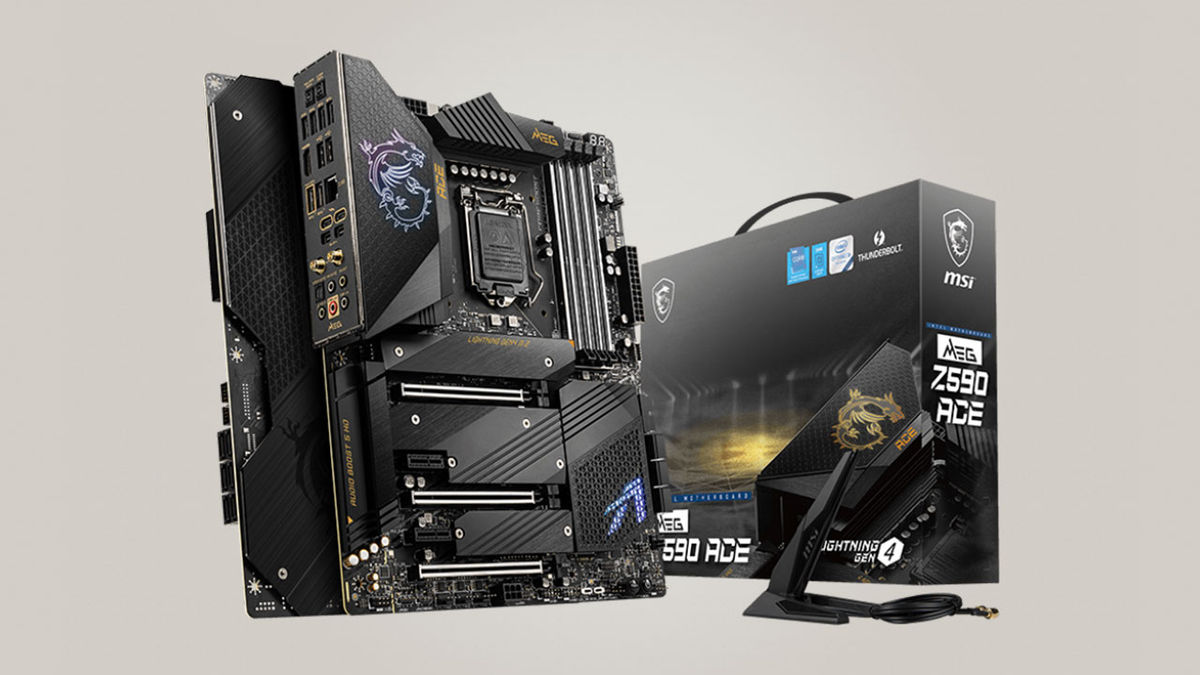 The MSI MEG Z590 ACE can be seen as an incremental upgrade over the older MSI MEG Z490 ACE motherboard with new  additions in the right places. The board is a bit more expensive than its predecessor and is built to cater to the needs of the PC enthusiast. We have fewer boards at launch with the Z590 platform considering that Alder Lake is just 6-8 months away. Nevertheless, this is a stop gap platform and possibly the last 14nm release before Intel moves into 10nm for the mainstream desktop. For that, this makes for a nice farewell.

MSI MEG Z590 ACE is the latest member of the ACE lineup of flagship motherboards from MSI and it’s built to make the most of the Intel Z590 platform for their latest 11th Gen Intel Core “Rocket Lake” desktop processors. The MEG Z590 ACE is right at the top alongside the MSI MEG Z590 GODLIKE and the MPG Z590 CARBON EK X. We haven’t spotted the MSI MEG Z590 ACE selling in India yet so we can’t comment on the Indian price but a peek at Newegg shows the board listed for USD 587 which works out to a little over INR 50K with 18% GST added to the direct forex conversion. The actual price could very well end up a little higher. Comparing this to the launch price of the MSI MEG Z490 ACE tells us that it’s a bit more expensive but then again we get PCIe Gen 4.0 on the Z590 boards (provided they’re paired with an 11th Gen CPU) and that does add up a little. Let’s take a closer look at the MEG Z590 ACE. 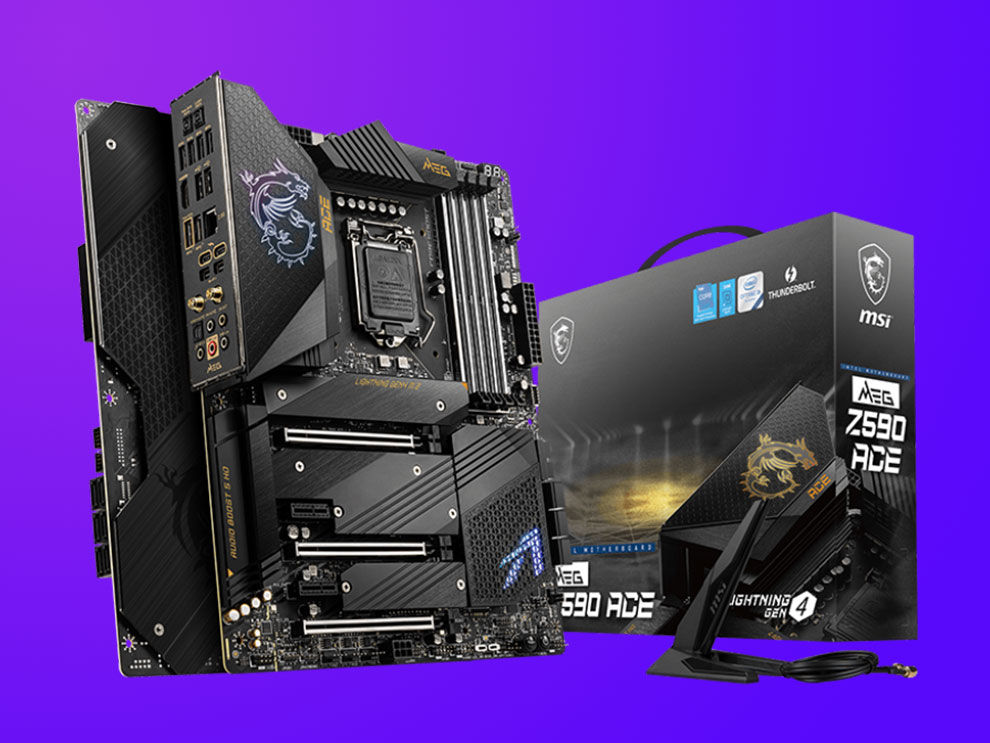 We see the same colour scheme on the MEG Z590 ACE as we did on the MSI MEG Z490 ACE. The same black and gold aesthetic with a slightly different style language is used here. The packaging holds no punches in screaming out about PCIe Gen 4.0. The RGB elements have been toned down comparatively. We have a new RGB dragon logo on the rear I/O shroud and another one tacked onto the PCH heatsink. That being said, all the connectors for the different RGB ecosystems are all present so no matter which RGB ecosystem you go with, you should be able to make it work without any trouble. There’s a bit more metal on the board in the form of additional M.2 heatsinks and that gives the board a more unibody look.

To view the detailed specification list for different versions of the motherboard, please refer to MSI’s official website.

Like all flagship motherboards, the MSI MEG Z590 ACE comes with plenty of accessories and essential cables in the box. We see a couple of new additions over the older gen Z490 board. Aside from the usual user manual, quick start guide and SATA cables and stickers, we see a cleaning brush, pair of Philips and flathead screwdrivers, DP to mini-DP cable, RGB extension cables, and cables for RAINBOW and Corsair RGB connectors. 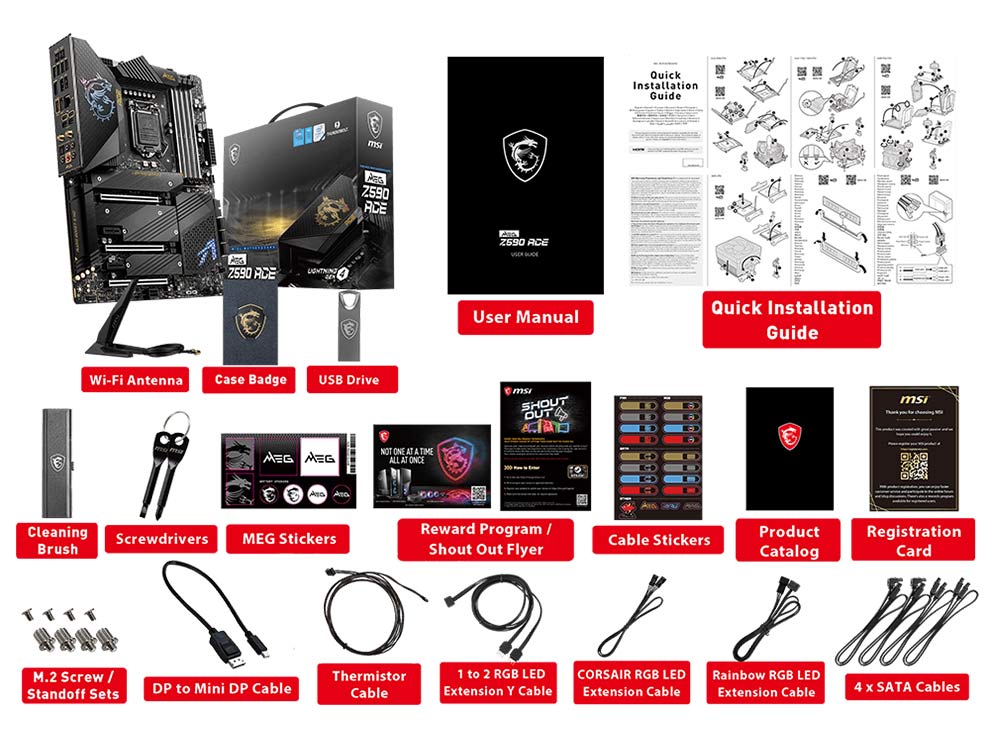 The pair of screwdrivers and cleaning brush is an odd but welcome addition to the accessory bunch. We certainly had a lot of use for the screwdrivers right out of the box. Given the mesh design and the textured surfaces used across the board, we’re certain that the brush is going to come handy as well.

The MSI MEG Z590 ACE is packed to the hilt with features and has a very busy layout. Thankfully, the massive heatsinks spread across the length and breadth of the motherboard manage to hide it all and give it a cleaner look. Let’s take a close look at the components.

The CPU area is quite packed from all sides but the screw mounting holes have plenty of clearance. VRM heatsinks on the top and sides aren’t ridiculously tall. You should have no trouble installing most CPU coolers on this board. Low-profile coolers would be a little difficult to install. The VRM heatsinks are massive metal chunks with a single heat pipe running through them. The board uses two 8-PIN EPS connectors which are situated on the top-left and we had no problems while plugging or unplugging the power connectors after the board was mounted into a chassis. 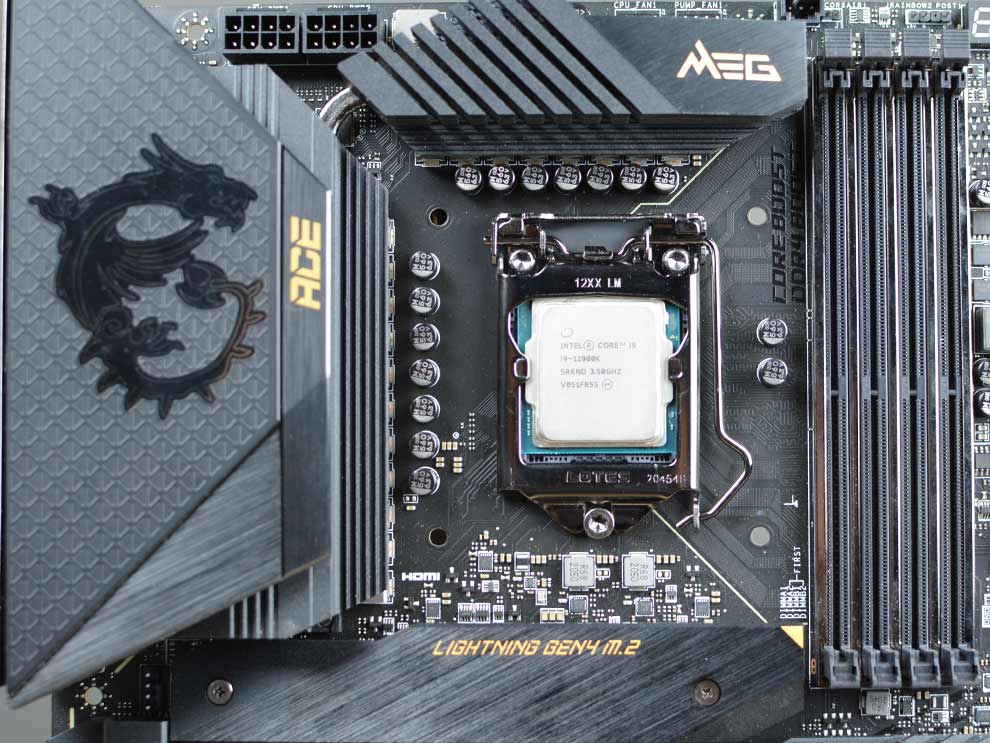 After taking the heatsinks off the board we get to take a gander at the VRM. The MSI MEG Z590 ACE uses the same Intersil ISL69269 controller as the Z490 ACE. For the power stages, it uses 16 Intersil ISL99390 90 Amp MOSFETs and for the SOC, it uses two Renesas RAA220075 75 Amp MOSFETs. MSI states that they’ve gone with a 16+2+1 power phase design on this motherboard. The Intersil ISL69269 controller can only handle up to 12 phases, so MSI is using doublers here to get the 16 phases for the Vcore and while the two phases for the SOC are not using any doublers. These doublers used are Renesas ISL617A and they can be seen on the rear of the board underneath the aluminium backplate. 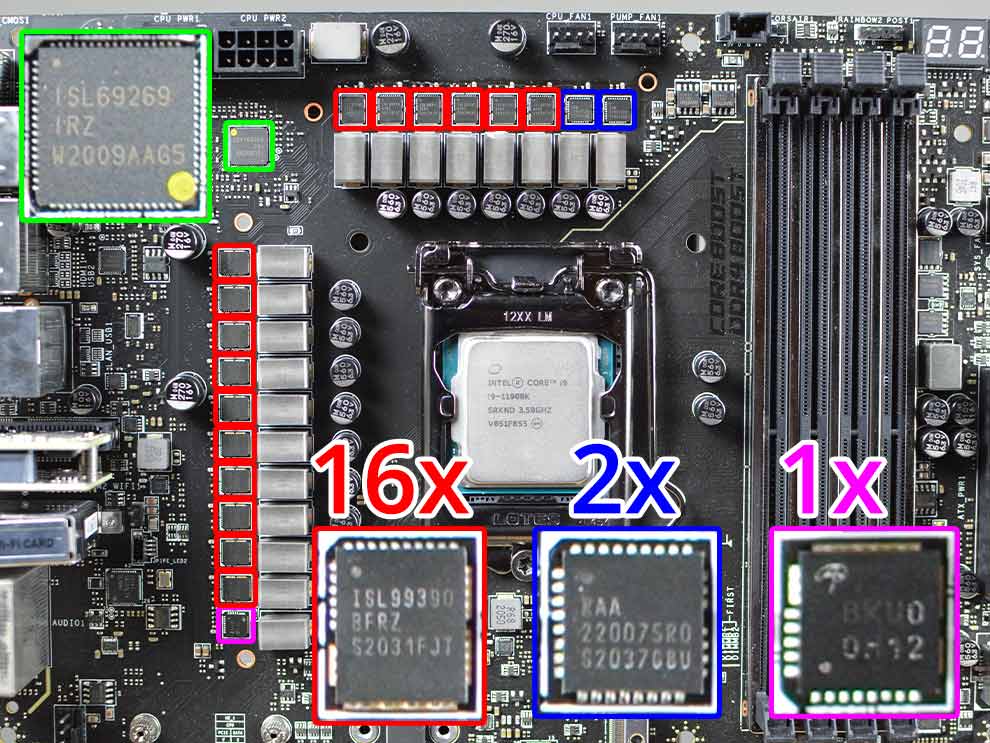 At the end of the day, the Vcore can use up to 1440 Amperes via this setup so you’ve got a pretty capable VRM set up here.

There’s a decent amount of clearance between the CPU socket and the RAM slots. Speaking of which, MSI is using slots with latches on just one side. This is a bit convenient to install modules into, especially when you consider the fact that the bottom-end of the RAM slots tend to be situated a little too close to the graphics card. So unlatching the bottom-end becomes difficult. In this case, you’re not going to face that issue. The RAM slots themselves have metal shields to add some rigidity. 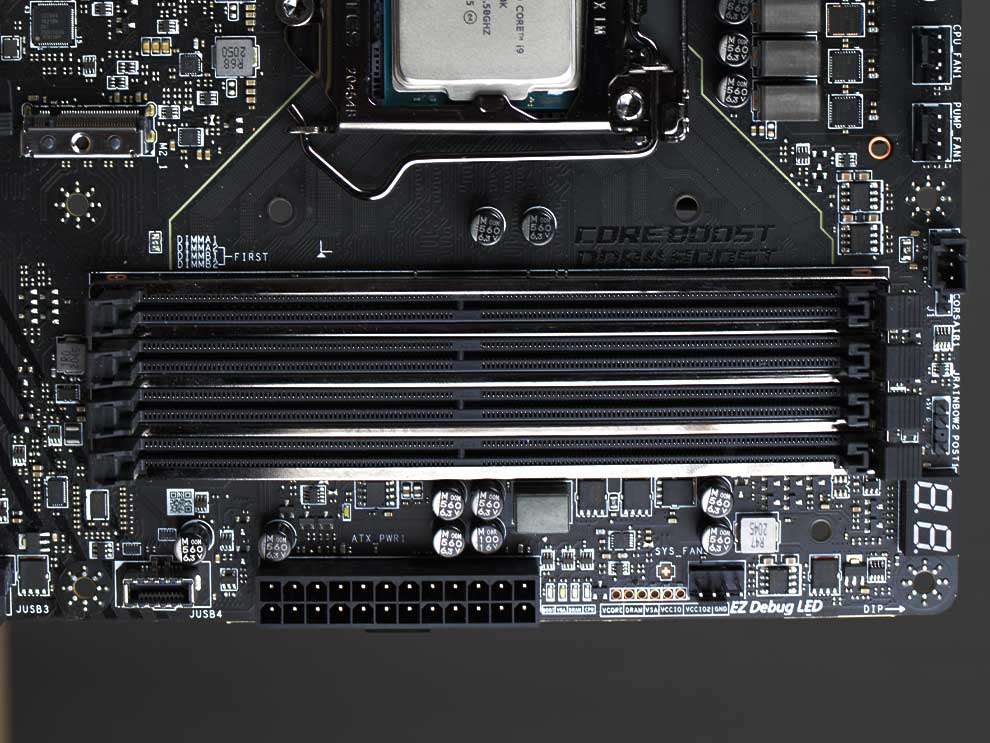 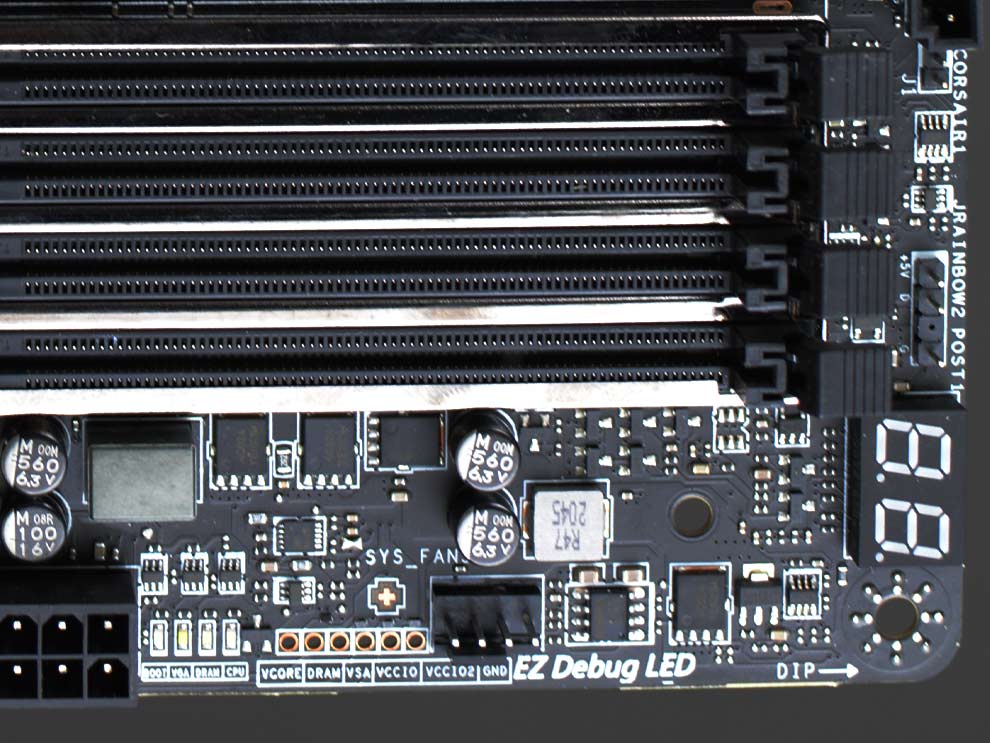 The MSI MEG Z590 ACE has 3 x16 PCIe slots, 2 x1 PCIe slots and 4 NVMe slots. The first two of the x16 PCIe slots are from the CPU and the third one comes from the PCH. The ones coming from the CPU support PCIe Gen 4.0 when a 11th Gen CPU is installed and the third x16 PCIe slot comes from the chipset so you only get PCIe Gen 3.0 on that. These slots can be configured in either a 16/0/4 arrangement or in an 8/8/4 arrangement. The two x1 PCIe slots come from the PCH. Talking about multi-GPU configurations, you can have a 3-way CrossFire or 2-way SLI. Although multi-GPU configurations are being phased out by manufacturers so unless you’re using GPUs for GPGPU compute, these are worthless. 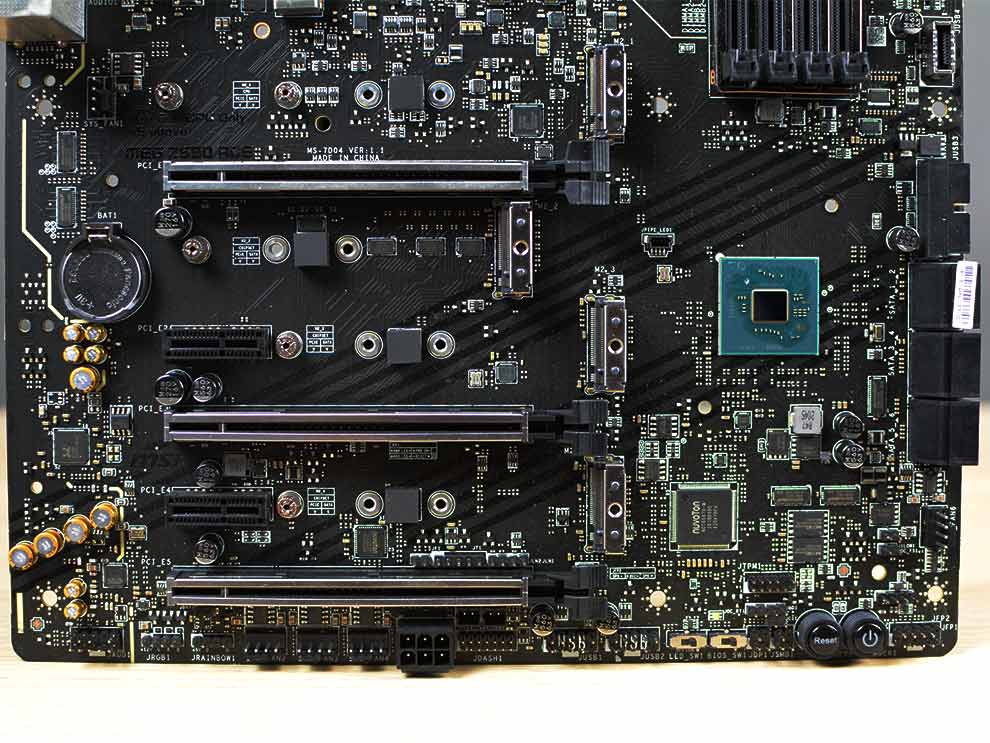 With all the heatsinks removed, we see there are four 110mm M.2 slots on the MEG Z590 ACE. The first one is capable of PCIe Gen 4.0 when an 11th Gen CPU is installed while the remaining three only support PCIe Gen 3.0. The second and third M.2 slots from the top also support SATA drives and share bandwidth with the SATA ports on the right. The Z490 chipset supports RAID 0, 1, and 10 for SATA and RAID 0 and 1 for M.2. There is no option for RAID 5 since that requires a minimum of three drives to be connected via the same protocol. The MSI MEG Z590 ACE makes use of ASMedia ASM1480 mux/demux for handling the PCIe lanes between all the connectors. 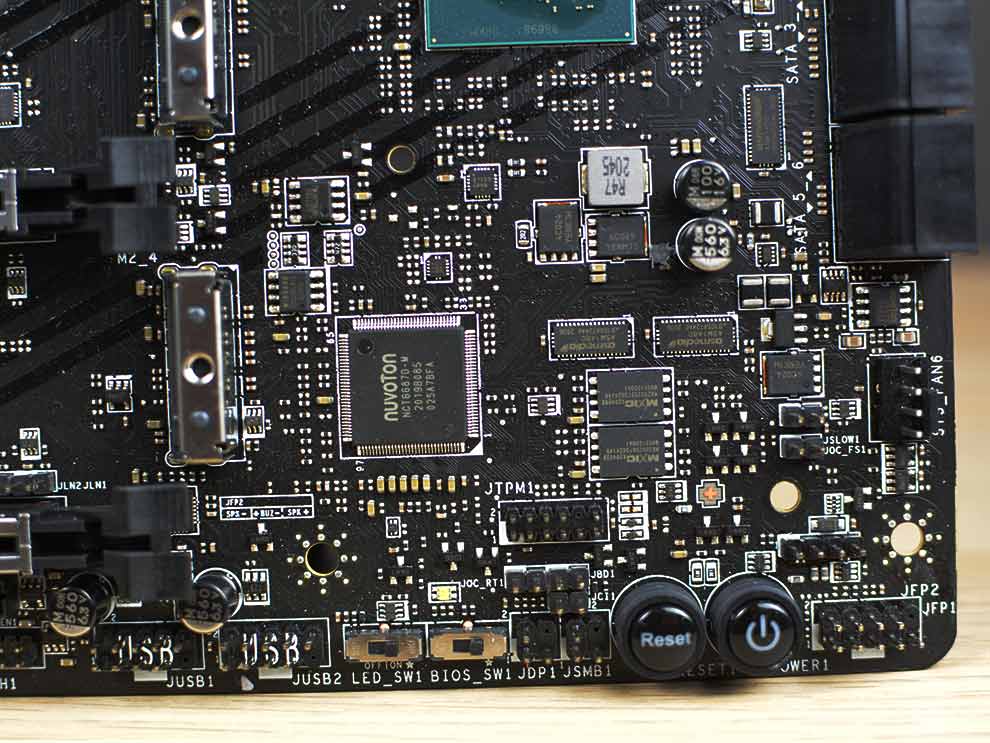 The physical LED switch right next to the power switch is a nice addition for folks who don't want to dig through the BIOS to disable all the LEDs.

Usually, the audio CODEC doesn’t change for a couple of years with just minor improvements being visible across several generations of motherboards. That is not the case here since the MSI MEG Z590 ACE comes with the latest Realtek ALC4082 audio CODEC. It’s aided by the ESS SABRE 9018 Q2C audio DAC that was introduced six years ago. At least some things have changed. 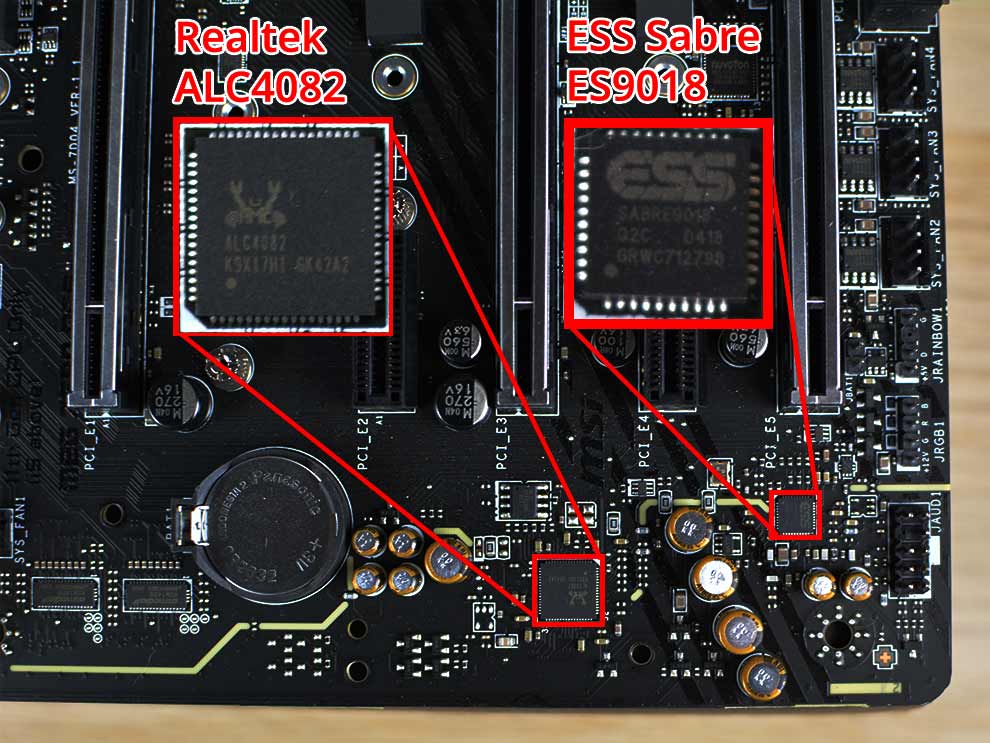 Like most flagship boards, the audio circuitry on the MEG Z590 ACE is shown to have a physical separation to reduce interference. We don’t see any shielding used on the CODEC or the DAC.

There’s no active cooling elements within the rear I/O shroud this time so we get a backplate that’s cushion and properly labelled without any of the ventilation slits. The audio jacks and Wi-Fi SMA connectors have gold plating for corrosion resistance and the placement of buttons across the back seems quite decent. 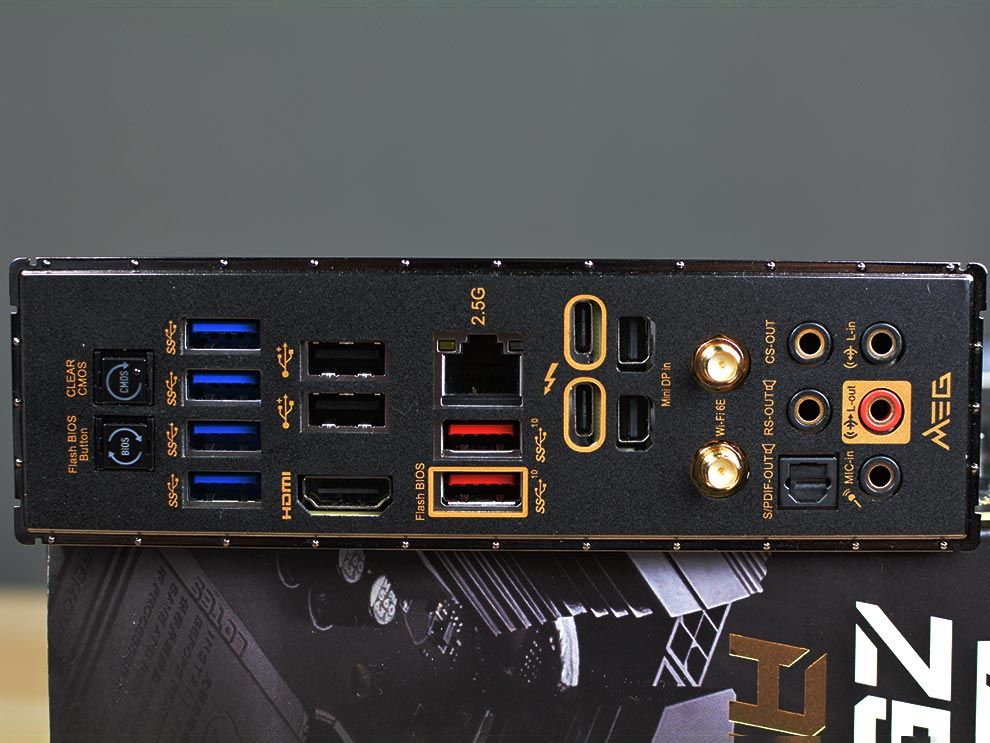 There are no legacy PS/2 ports on the MSI MEG Z590 ACE. The Z490 had one. And only one HDMI video connector is present. A huge  chunk of space has been dedicated to two Thunderbolt 4 ports along with two mini-DP inputs. With this, you’ve lost out on the additional Ethernet port and a few USB ports. 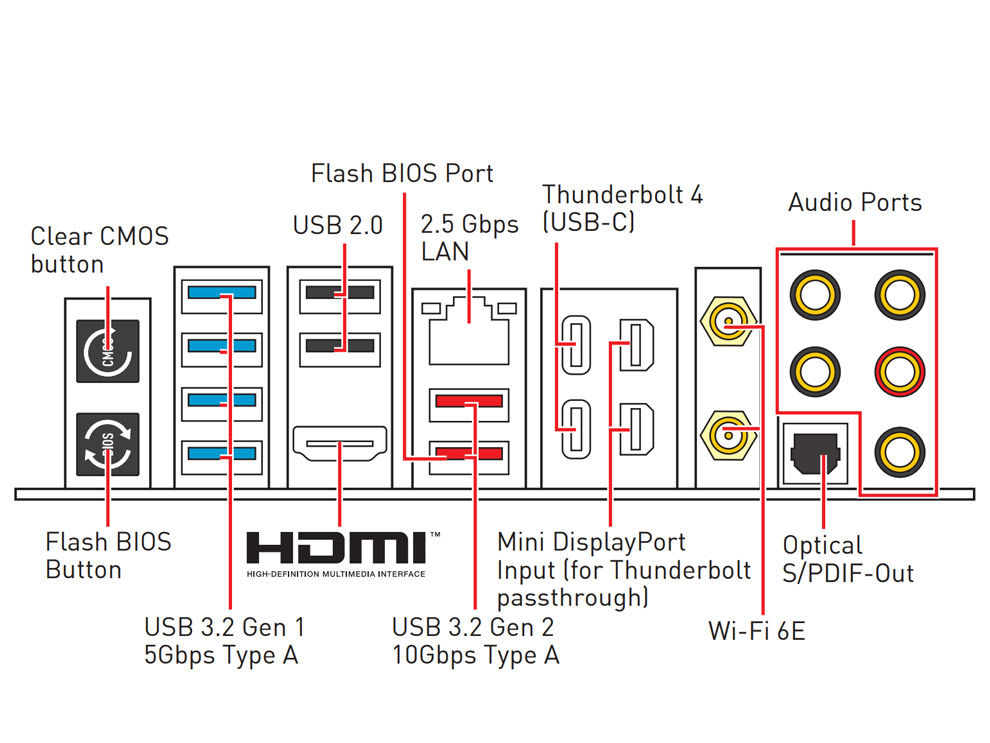 The trade-off between the secondary ethernet port with Thunderbolt ports does make sense as neither of them are essential. With this arrangement, you get two additional USB ports which is always a welcome addition. 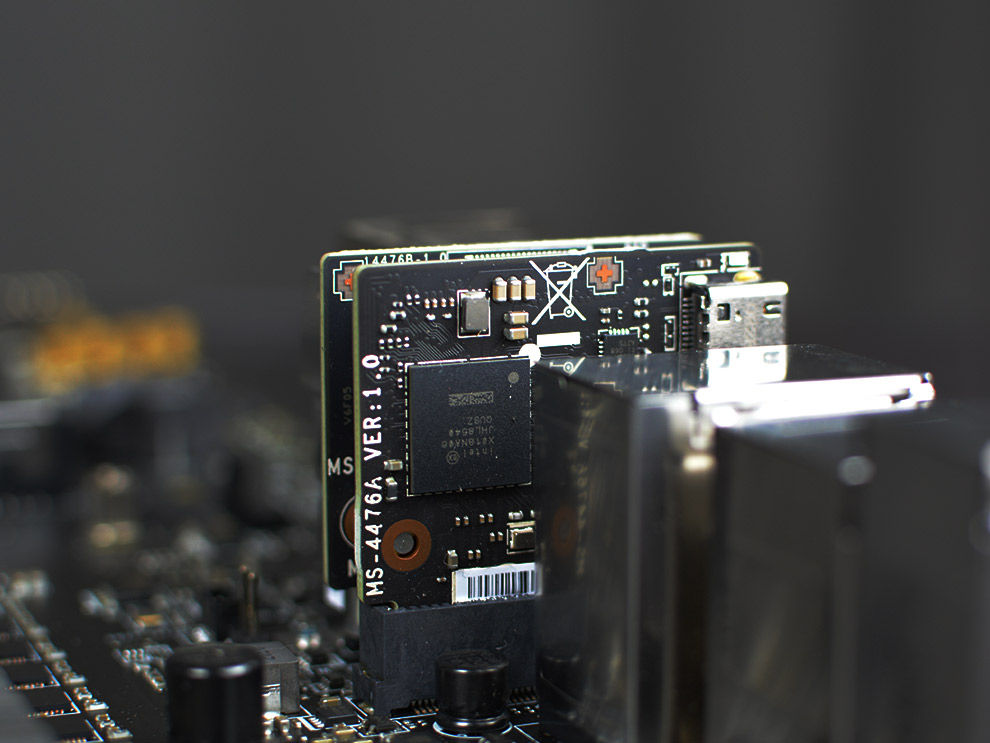 The Thunderbolt 4 connectors on the MSI MEG Z590 ACE are courtesy of Intel’s own JHL8540 ‘Maple Ridge’ controller. Not a lot has changed on the surface with Thunderbolt 4 since the raw data transfer speeds are the same as Thunderbolt 3. What has changed is the ability to chain multiple 4K@60 displays.

MSI is still using their tried and tested Click BIOS 5 so there isn’t much to talk about over here. There isn't much to add about MSI's Click BIOS 5 than what has been said before. The overall interface is quite straightforward for folks to understand. If you’re looking for the Resizable BAR settings then head over to Settings>Advanced>PCI Subsystem Settings to find two options – Re-Size BAR and Above 4G memory. Turn these two on and you can make use of the resizable BAR feature with AMD’s RX 6000 cards and NVIDIA RTX 30 GPUs. More GPUs will receive access to the resizable BAR with future driver updates.

The MSI MEG Z590 ACE can be seen as an incremental upgrade over the older MSI MEG Z490 ACE motherboard with new  additions in the right places. The board is a bit more expensive than its predecessor and is built to cater to the needs of the PC enthusiast. We have fewer boards at launch with the Z590 platform considering that Alder Lake is just 6-8 months away. Nevertheless, this is a stop gap platform and possibly the last 14nm release before Intel moves into 10nm for the mainstream desktop. For that, this makes for a nice farewell. 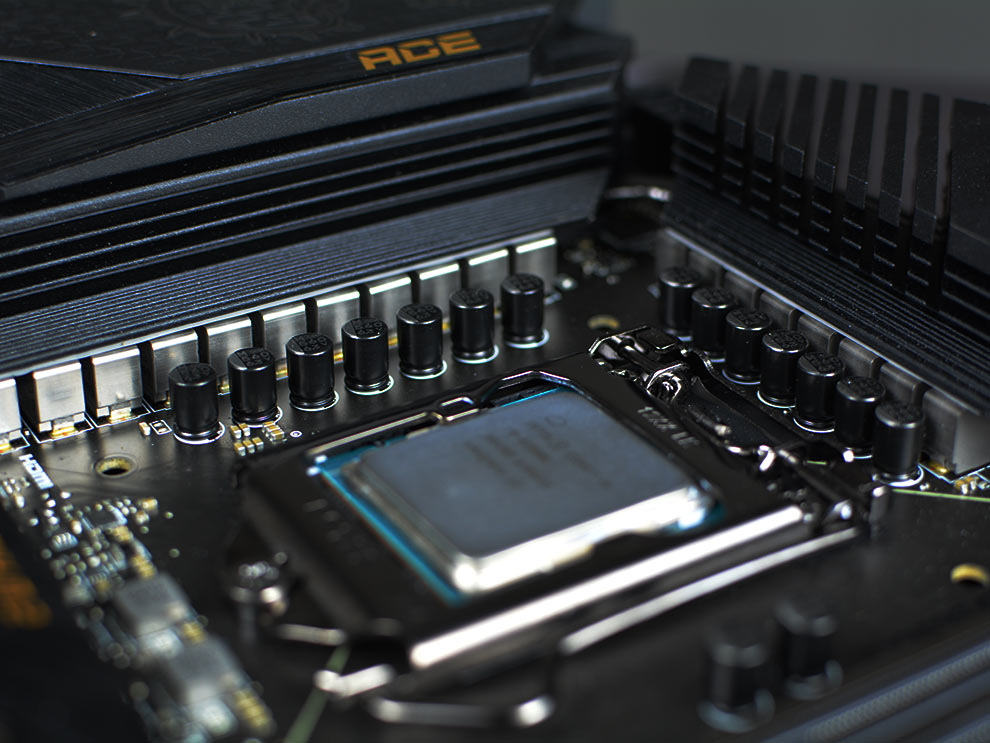