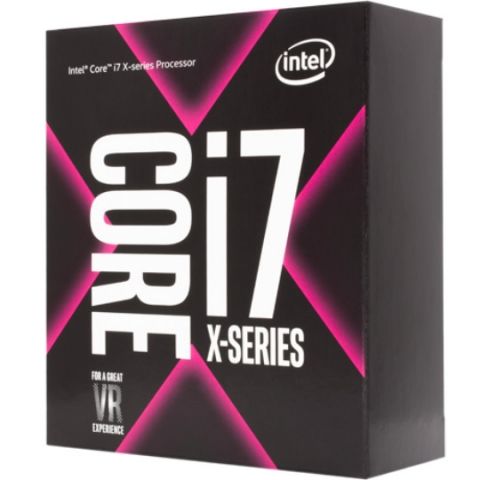 The Intel Core i7-7740X is a unique proposition from Intel. It has exhibited some of the best single-threaded performance we’ve seen with the Kabylake microarchitecture. However, the 7700K along with a Z270 board seems to offer near about the same performance for a much lower investment. This is because of the fact that the X299 boards are not at all cheap. And even if you did invest in an X299 board, then the Kabylake-X CPUs can’t make the most of the platform because of the lower PCI Express lane count. Close to home, these SKUs have become quite rare to get your hands on which could directly indicate the market demand for these SKUs. And with the recently launched Coffee Lake-S processors, it’d be better to wait and see how the new platform pans out before taking the plunge.

Intel’s Basin Falls platform had quite a few surprises in store. Having been revealed at Computex, the X299 Platform was all about playing leapfrog with AMD’s Threadripper announcement. For starters, the top 4 highest core SKUs i.e. the 18-core Intel Core i9-7980XE, 7960X, 7940X and 7920X didn’t even have their entire specifications finalised because they were that early in the R&D process. However, the 10-core Intel Core i9-7900X and all the SKUs lower than it were released soon after. However, there were two additions to the processor family, i.e. the Intel Core i7-7740X and the Intel Core i5-7640X which stood out from the rest. These were Kabylake-X CPUs that were built for the X299 platform. And they hardly had anything to do with the benefits of the X299 platform. They couldn’t handle all the extra PCIe lanes and they certainly couldn’t handle more than 2 memory channels. So why were these CPUs even introduced?

Intel Core i7-7740X Specifications
The two KBL-X SKUs have a unique offering within the Intel SKU stack. Here’s how they stand up against the existing set of CPUs for the X299 platform. It appears that while these new processors have a higher TDP, most of the remaining specs are practically the same. The IGP doesn’t exist but the default RAM frequency is greater. This will again, help in achieving higher single-threaded performance. Moreover, the pricing doesn’t put these processors ahead of the existing KBL-S. So there’s no additional premium for the higher overheard that you’re getting by going in for these KBL-X SKUs.

We start off with Cinebench R15 and Kabylake-X immediately shines through ahead of every other SKU we’’ve tested. It’s score is better than even the newly released 10-core Core i9 7900X as well making it the best performing Intel SKU in this particular benchmark. 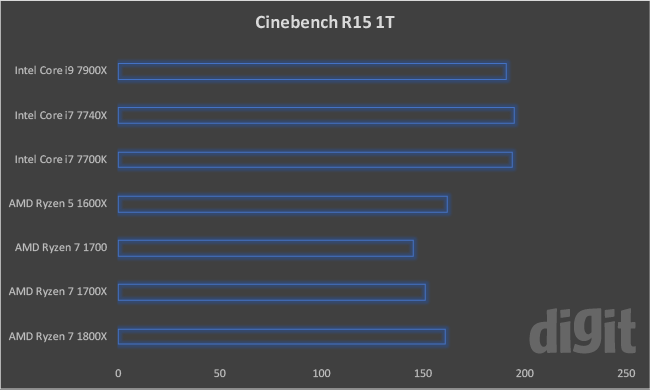 Moving on to the multithreaded run of Cinebench R15, we see that the 7740X is ahead of the 7700K by a sliver but every other CPU with more threads easily scores much better than the 7740X. 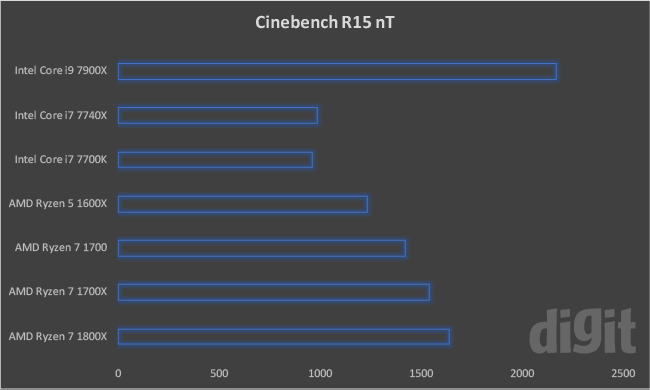 Productivity and Office
Next up are productivity benchmarks to determine how well these processors fare in everyday operations. These benchmarks indicate how well the new KBL-X SKUs will perform for the majority of its active time.

As seen in the Ryzen 5 benchmarks, we noticed that WinRAR doesn’t make the best of the number of cores that are accessible to them. On the other hand, 7-zip scales really well with more cores. Surprisingly, the Ryzen 5 1600X is still way better than all SKUs we have on hand when using WinRAR. However, 7-zip seems to scale with the cores as well as clock speeds. Thus the 7900X ends up scoring the most and then we have the Ryzen SKUs and lastly we have the Kabylake SKUs. The 7740X in particular, performs better than the 7700K but doesn’t match up to the Ryzen SKUs. 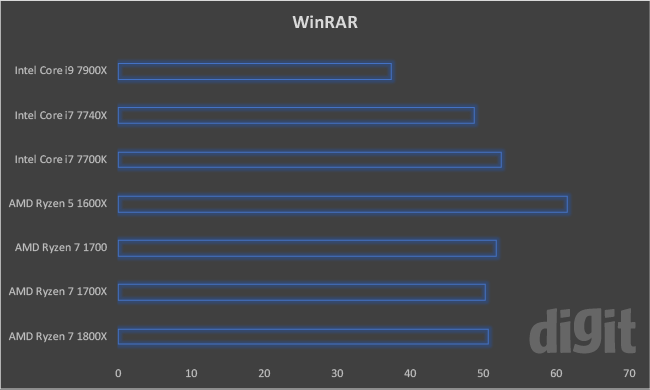 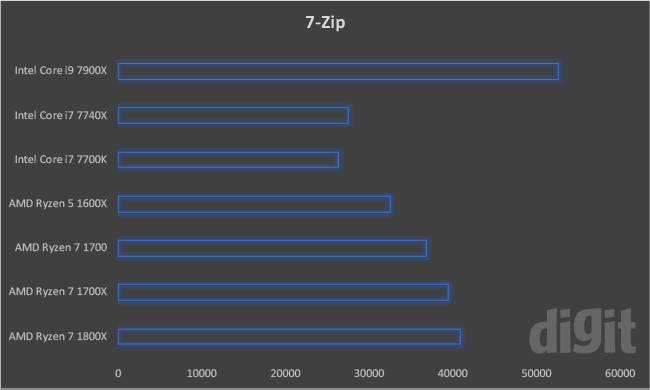 We then move on to the industry standard PCMark8 to run its bevy of trace-based benchmarks. With most of the average user’s applications being single threaded, we see PCMark8 too favouring the Intel processors as they have much better single threaded optimisation. The Intel CPUs enjoy a good lead over the AMD SKUs and the 7740X again shines bright thanks to its single-threaded performance. 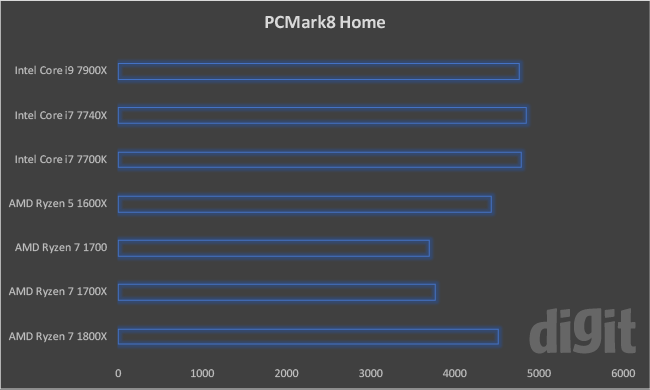 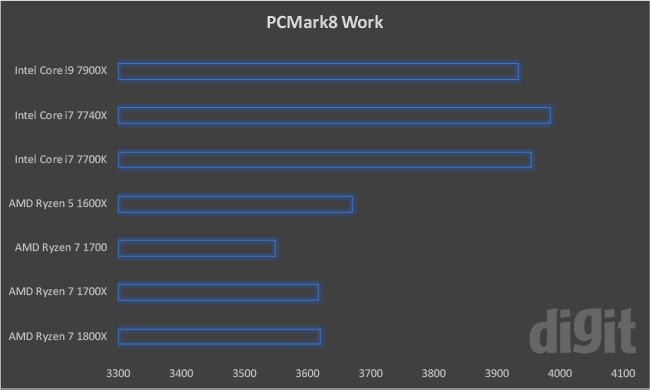 The performance difference between Intel and AMD Ryzen CPUs really pops out with PCMark8 Work with OpenCL disabled. And among the Intel CPUs the 7740X continues to retain a lead.

Encoding and Rendering
One of the key reasons that people opt for more cores is the obvious advantage gained in video editing and encoding. Even tasks like playing around with CAD software is aided to an extent by the CPU before having the need to offload the more intensive tasks to specialised accelerators like NVIDIA Quadro or AMD Radeon Pro series.

We ran Handbrake to encode a 4K video from Main to High under the Very Fast preset. The 10-core 7900X takes the lead with the 8-core Ryzen 7 1800X coming in at a close second. The 7700K follows in at the third spot, however, the 7740X remains in its wake. Which is a surprising anomaly in this case. 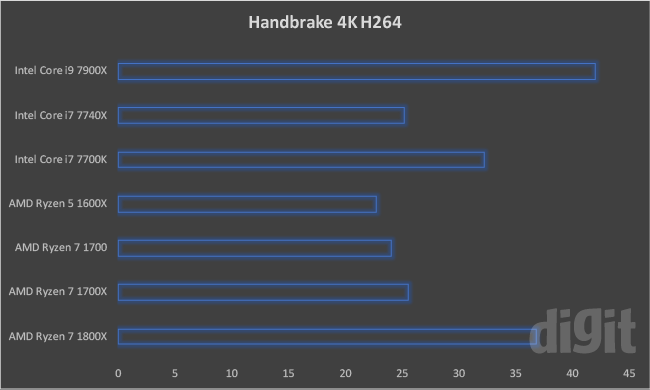 Next up, is an OpenCL based CPU rendering test using Blender. There’s nothing out of the ordinary here as we see the time taken to conclude the test seems to reduce in an inverse proportion relationship to the CPUs. 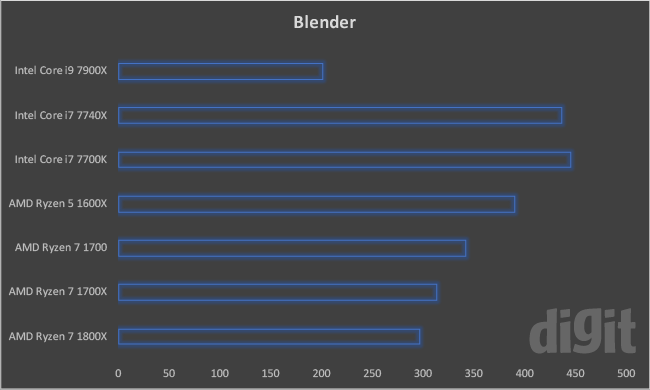 The last benchmark is POV-Ray which again scales with respect to core counts and clock speeds. The 7740X seems to be lapping up the meagre benefits of the X299 platform. Its higher overclocking potential will see a better score in POV-Ray. 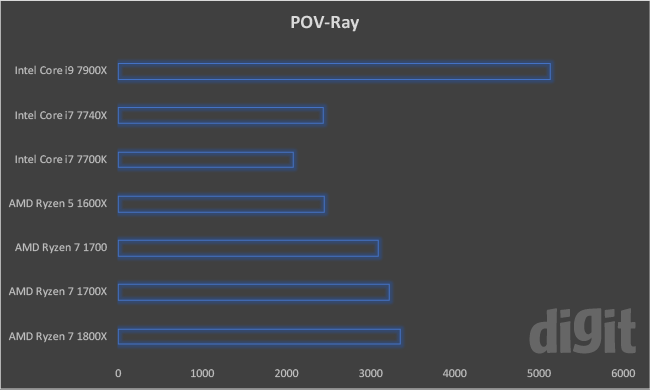 Gaming
All of these were performed with a GTX 1080 at 1080p resolution. And as with most Intel CPUs, there’s hardly any difference in performance once you have the bare minimum requirements satiated. AMD’s offerings, on the other hand, still lag slightly behind when it comes to gaming performance. 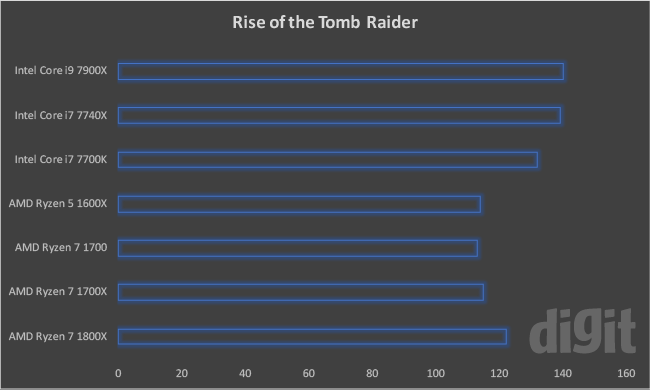 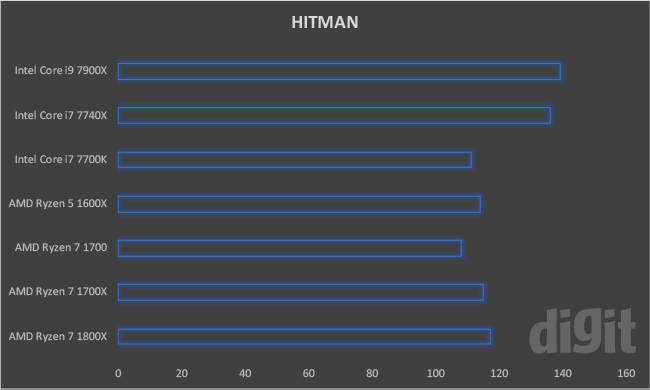 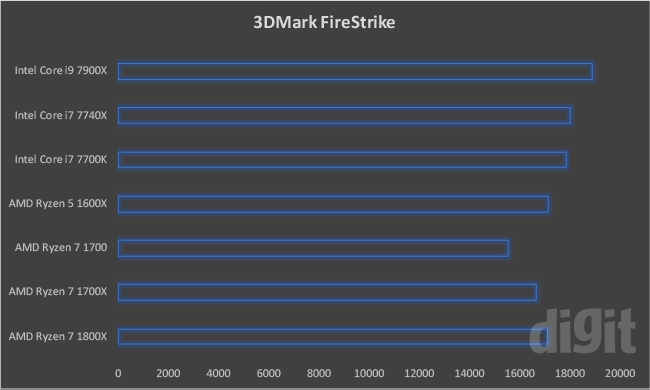