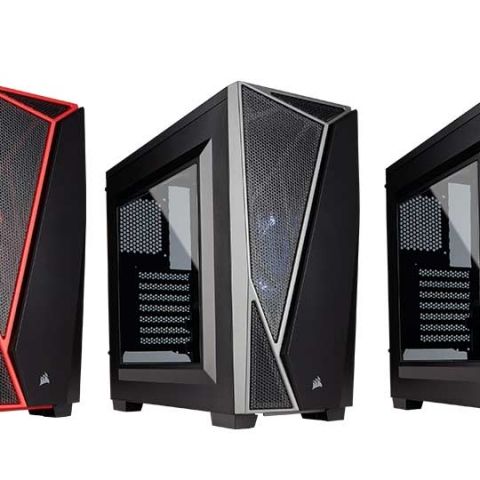 The Carbide SPEC-04 is a basic and budget cabinet. The beauty of this cabinet is that even though there aren’t any premium features but you will still be able to assemble a powerful gaming rig inside.  It’s certainly refreshing from the SPEC-03 while missing out on minor aspects that we would have been appreciated as an upgrade. The place where the cabinet excels is its price and build quality. Selling at Rs. 5,499, you should be able to get the cabinet for around Rs. 5,000 or even below if you’re fortunate to come across a sweet deal online. The SPEC Alpha ships with three fans, offering better cooling in its out-of-the-box setting while also supporting a 240mm radiator at the front and a fan speed controller on the IO panel. Hence, spending a bit more (around Rs. 6,500) and buying the SPEC Alpha is what we would recommend over the SPEC-04.

Corsair has a huge roster of cabinets that can take care of several use-cases when it comes to building a PC. The Carbide series is itself further classified into several categories and falling under the beginner-friendly cabinets, the SPEC-04 is the latest model Corsair has to offer. It’s an upgraded version of the older SPEC-03 which was also a great budget cabinet during its time (it still is). There are a few interesting upgrades from the previous model that we’ll be covering in this review. We’ll also go through the various features such as cooling options, storage capability and temperature performance, finally arriving at a conclusion whether it’s a worthy upgrade or not. 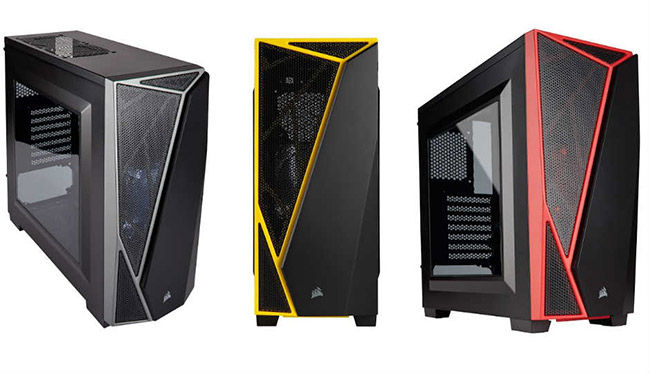 Speaking of the design, let’s talk about the differences between the SPEC-03 and the SPEC-04 first. The ODD cage has been discarded which has anyway become the norm in cabinets nowadays. This enables you to install a 120mm or 140mm radiator on the front panel which was impossible on the older model. Another update is the front panel design that follows the Corsair Bulldog angular design also seen on the Corsair SPEC Alpha. The IO panel has also been moved to the side of the chassis whereas the SPEC-03 had IO ports on the top. Earlier, two SSD trays were located on top of the HDD cage and this time, the trays have been moved to the motherboard plate. This time, the HDD cage is removable as well. The final noticeable change on the SPEC-04 is the motherboard cutouts. The SPEC-03 did support mini-ITX motherboards but on the newer model, you get extra cutouts to easily route cables including the motherboard power and SATA cables.

The SPEC-04 essentially has a barebones design seen on regular cabinets. As mentioned earlier, the major update aesthetically is the front panel following Corsair’s Bulldog angular design approach. Only time will tell whether Corsair is heading towards converging few other cabinets under the same design. Placing the IO panel on the right side of the cabinet is great since having the ports on the top collects a lot of dust over time. The front panel can be easily removed without any tools to gain access to the fan mounts. The SPEC-04 comes with a white LED 120mm fan on the front which supports up to a total of three 120mm fans. The front panel is lined with a dust filter that can be removed without any tools for cleaning. It’s too much to ask at this price but it would have been great if the Corsair logo on the front panel could lit up, and we aren’t even asking for RGB lighting. 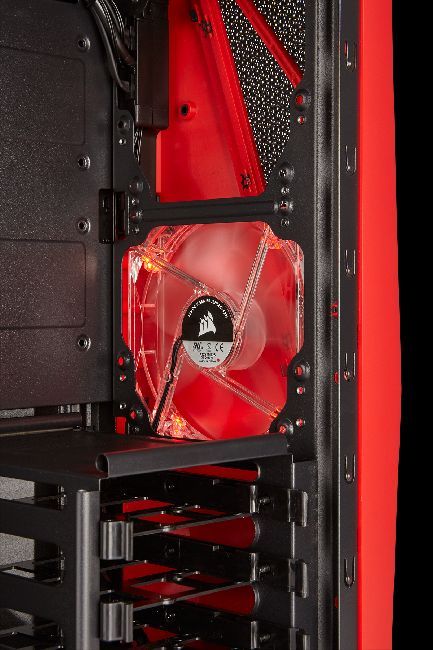 The top panel seems to be the same as seen on the SPEC-03 supporting fan mounts for two 120mm fans. There’s not enough clearance to install a radiator on the top panel. Since Corsair brought the angular design to the SPEC-04, a top panel with the same angular design could have been attached, rather than having a naked frame, to complete the aesthetic of the cabinet. Due to the absence of a dust filter, the top panel will become a gateway for dust to enter your cabinet. Having no fans installed on the top panel will only make it worse. The rear panel includes a 120mm fan mount where a radiator can also be installed. GPU and PSU installation will require tools. Since this is an upgrade, we expected the expansion slots to be tool-less using thumb screws to hold the GPU. 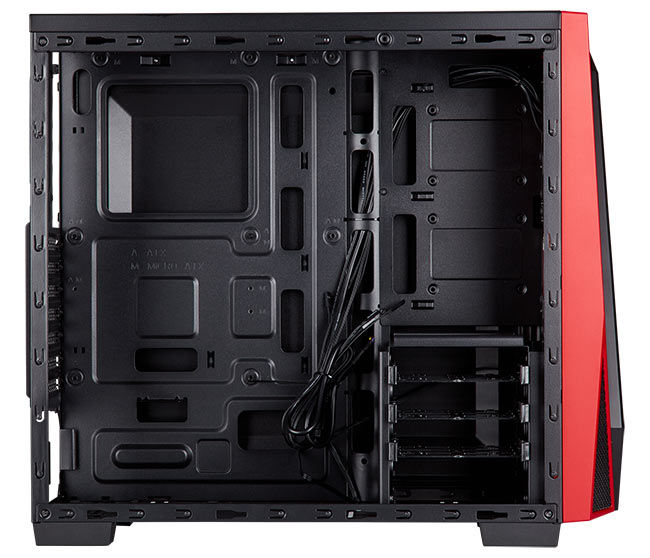 The bottom panel can house a PSU of a maximum length of 225mm. The HDD cage consists of three trays that can also house SSDs. The trays could have been of higher quality and rubber mounts on these trays would have been appreciated. In case you don’t require HDD storage, then you can detach the HDD cage by removing the four screws on the bottom of the chassis. Do note, this will make you lose support for HDDs in your system and you will have to depend on the two SSD trays and on-board devices for storage. The SSD trays are located on the motherboard plate near the front panel, right above the HDD cage. The motherboard plate includes dedicated cutouts for the SSDs which is a good thing whether you’re using angled SATA cables or not. 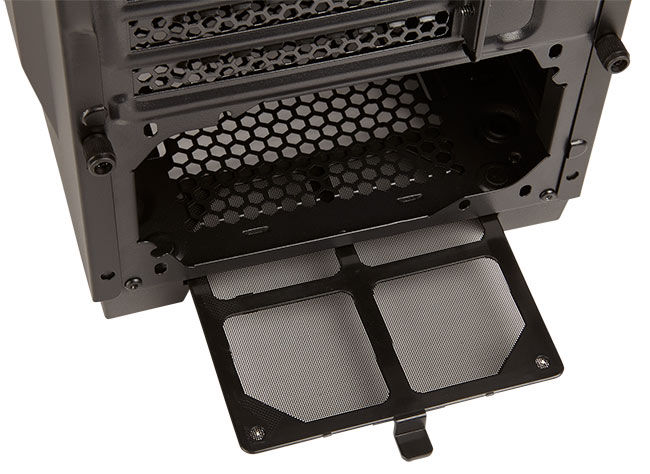 As you already must have figured out, in terms of liquid cooling, there isn’t much scope other than installing a 140mm or 120mm radiator on the front panel or just a 120mm radiator on the rear panel. You can reach a maximum of six fans in the cabinet including three on the front panel, two on the top and one on the rear panel. Due to the space present above the HDD cage, you can also install a reservoir for custom watercooled system. 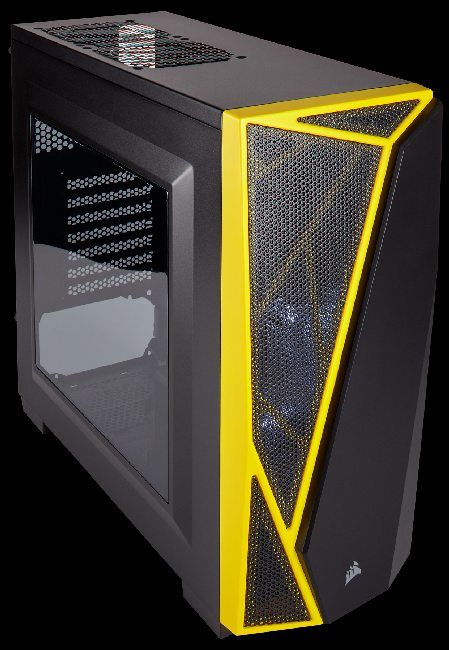 The cabinet comes with a 120mm fan and it would have been great if they had shipped another or two 120mm for exhaust. It can be connected to the motherboard directly using the 3-pin connector. This is a step back from the SPEC-03 since it shipped with three fans – two on the front and one at the rear. To achieve better cooling, you will have to spend some more to get fans for your cabinet. You can read more about this in the temperature performance section.

Assembling the SPEC-04 was a breeze and we didn’t face any glaring problems while inserting the components. Although there are certain aspects that we noticed during the assembly. The CPU power cutout near the top is placed right behind the motherboard plate which makes it impossible to insert the cable after you’ve installed the motherboard. So, your only option is to route the CPU power cable from the top cutout in the middle or directly from the front (without routing it behind the motherboard plate). SSDs can be mounted either on the front or at the back, whatever you prefer, but if you’re inserting them on the front, you’ll need longer screws. 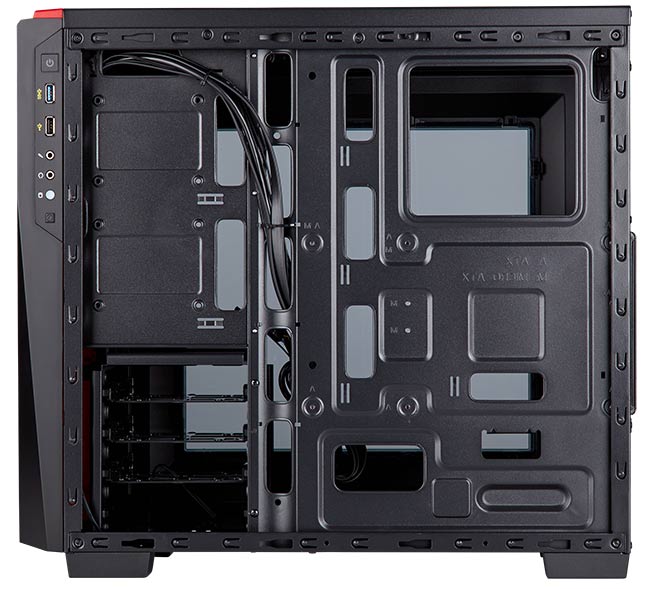 Cable management was average and the basic cables including the motherboard power, SATA and PCIe were comfortably routed. If you’re using a non-modular PSU, you’re going to have an ugly mess of cables at the bottom of the cabinet. If you’re a cleanliness freak, then a modular PSU is recommended. Even if you find extra cables dangling around, you can shove them below the HDD cage. The side panels are easy to install with thumbscrews. The plastic transparent window panel has a black tint that ensures the LED light from the fan isn’t too bright for your eyes. 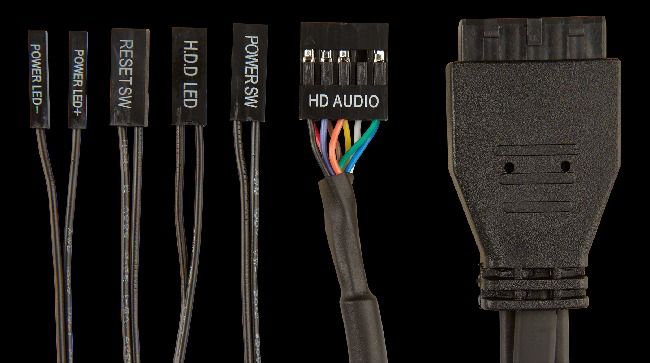 Our tests are executed in the default setting as it arrives in the box. You can obviously extend the cooling capabilities by installing more fans or liquid cooling systems. The objective of our test is to determine the hottest temperature that the cabinet can reach using air cooling since most users will be going with this option. Due to the presence of only one fan, the system ran hotter as expected. Setting the system to stay idle for about 30 minutes, the Intel Core i7-4960X stuck at 30 degrees Celsius whereas the Sapphire Radeon HD 7790 stayed at 38 degrees Celsius. The CPU hit 70 degrees Celsius in our Prime95 stress test which is a few degrees above average. The GPU touched a maximum temperature of 65 degrees Celsius in the FurMark 1080p preset benchmark. 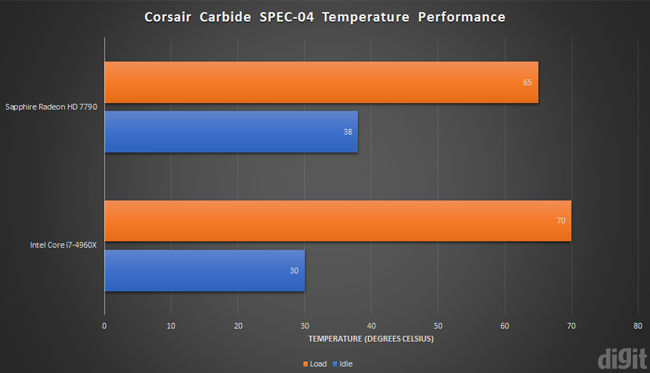 Just to measure the difference, we installed the Corsair ML120 Pro 120mm fan (capable of reaching a top speed of 2,400 RPM) on the rear panel and ran the same set of tests above. We found the CPU to idle at 25 degrees Celsius and GPU stayed at 33 degrees Celsius with no load on the system. After running our tests, the CPU settled at 57 degrees Celsius whereas the GPU reached 61 degrees Celsius. This clearly shows adding just one exhaust fan considerably dropped the temperature in its idle and full load state. Another thing to note is that aftermarket fans perform better than stock fans, so you will be able to achieve a similar level of cooling with one exhaust fan at the rear. In its full potential of six fans, you will be able to hit much lower temperatures.

The Carbide SPEC-04 is a basic and budget cabinet. The beauty of this cabinet is that even though there aren’t any premium features but you will still be able to assemble a powerful gaming rig inside. It’s certainly refreshing from the SPEC-03 while missing out on minor aspects that we would have been appreciated as an upgrade. Aesthetically, we would have loved the top panel following the same approach of the angular Bulldog design which is seen on the front panel. There’s only one fan included in the cabinet and since the SPEC-03 already ships with three fans, we expected the same with the SPEC-04. The cabinet is limited in terms of cooling options in its default setting, especially liquid cooling. Cable management is average and to achieve a clean system, we would recommend installing a modular PSU. You’ll find dust filters on the front panel and bottom panel below the PSU but nothing on the top panel which will attract dust into the cabinet.

The place where the cabinet excels is its price and build quality. Selling at Rs. 5,499, you should be able to get the cabinet for around Rs. 5,000 or even below if you’re fortunate to come across a sweet deal online. The SPEC Alpha is another cabinet from Corsair that costs a little higher than the SPEC-04 and looks brilliant since it’s built with the Bulldog design from scratch. Here, you get the option of adding a 240mm radiator on the front and additionally, you get a fan speed controller switch on the front IO ports. The SPEC Alpha ships with three fans, offering better cooling in its out-of-the-box setting. Hence, spending a bit more (around Rs. 6,500) and buying the SPEC Alpha is what we would recommend over the SPEC-04.