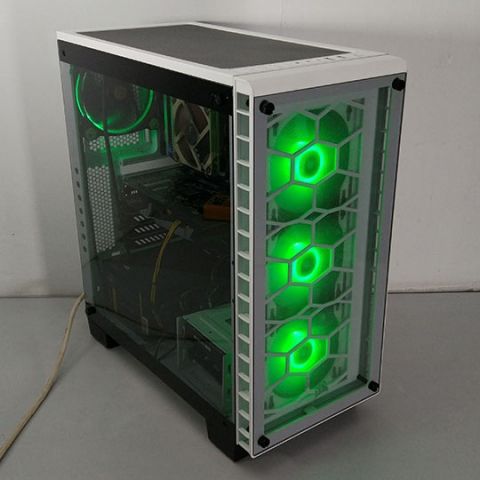 While incorporating the basic essential features for a powerful rig, the Corsair 460X offers impressive build quality on almost every front. The white edition, however, will be loved by only the ones who want to follow a colour scheme in their build. We don’t have any qualms with white cases, except that the coating tends to easily wear off in case of careless handling and scratching. In our unit, the paint had worn off near the thumbscrews. There’s healthy support for cooling solutions inside with three 120mm RGB fans already pre-installed. The lighting on these three fans can be controlled with the three buttons on the front I/O and the module inside. A lighting hub is also included which can house three more connections if you install more fans. Cable management can be a little time-consuming. We would have appreciated if there was a bit more room behind the motherboard to comfortably close the side panel. Speaking of thermal performance, it’s decent. The three intake fans on the front panel do a good job of blowing out all the hot air out of the cabinet without any exhaust. The Corsair 460X not only performs well in our thermal testing, but it offers robust build quality (except the paint job) and features in which you can showcase a beautiful build. However, we believe that the case is expensive in India and you should probably buy it during sales or when it’s available at a significantly lower price.

When you’re building a case, you might not be the only one who’s looking for one from only a performance point of view. Some would prefer to build their system on a case that will look beautiful on their desk. And it isn’t the case that if you go for a good-looking case, you won’t get enough features or decent cooling performance. The Corsair 460X’s white edition is catering to the ones who want both. An impressive looking case with a white colour scheme along with RGB lighting support and tempered glass side panels that keep your components cool under load. We’ll be taking a closer look at how the extra features supported on the case fare and also testing its thermal performance under different configurations. 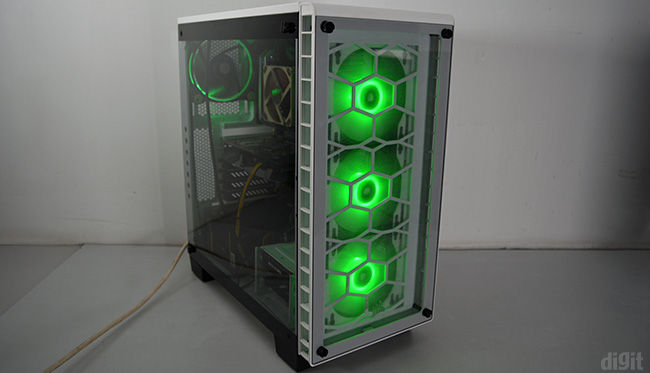 Exteriors of the Corsair 460X

Available in two colour variants, the Corsair 460X offers an elegant solution to people who are primarily aiming for aesthetics. The white version that we tested has a lower price than the regular variant. Almost every part of the case has the white paint job except the expansion slot plates. You will find tempered glass panels on the front and the side. They are attached to the case using the four-corner screw mechanism. For the side panel, we aren’t really a huge fan of this mechanism since it takes a longer time to remove. However, you don’t need to worry about it if you aren’t going to frequently open your case. There’s enough room for air intake between the front glass panel and the case. The dust filter on the front panel attaches to the case magnetically and the mesh is fine enough to stop dust from entering. 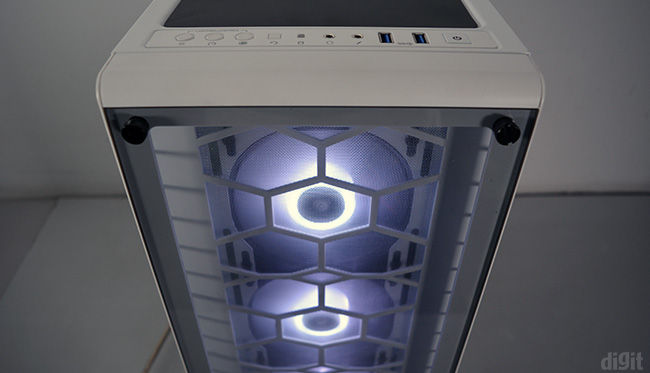 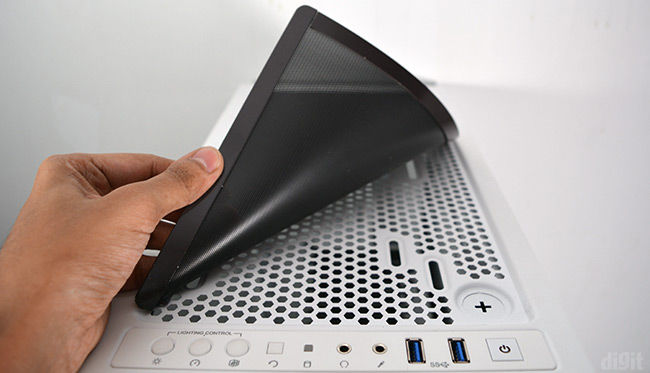 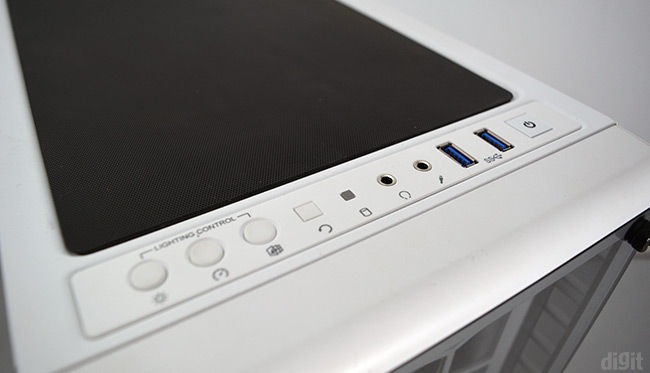 At the bottom, there’s a dust filter below the PSU area. It has a fine mesh to hold off the dust and it slides out easily for cleaning purposes. The rubber standoffs are of good quality, so they should be able to comfortably hold your entire build. 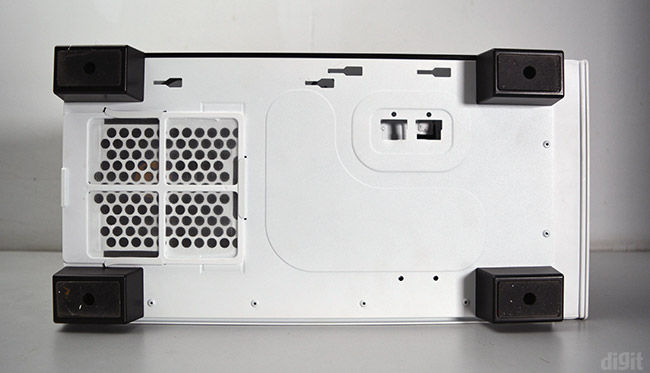 Inside the Corsair 460X

There’s nothing interesting going on in the interiors of the case. You won’t find any 5.25-inch ODD drive slots. The drive cage at the bottom contains two slots for 3.5-inch HDDs where SSDs can also be installed. If you aren’t installing a hard drive, then you can remove the drive cage easily. A PSU shroud covers the drive cage and the PSU and in between, you can store all the extra cables out of sight. The case comes with three 120mm RGB fans on the front panel. They need to be connected to your motherboard directly or to a fan hub if you’re installing a third-party hub. 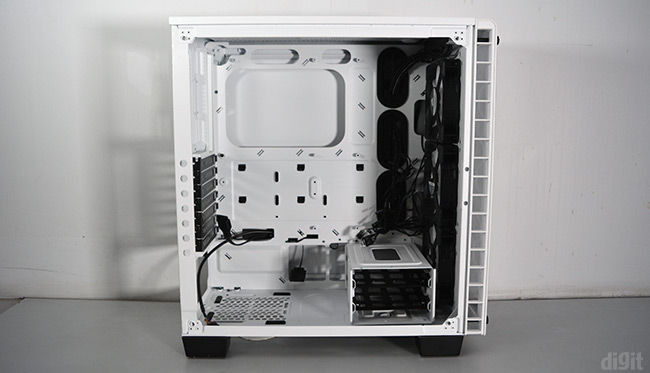 The front panel supports up to a 360mm radiator and it can only be installed if you remove or move the drive cage. There are extra holes inside, where the cage can be screwed, towards the PSU. The top panel also can support radiators of up to 240mm. But before that, you need to verify whether it doesn’t hinder with your RAM modules and the CPU cooler. 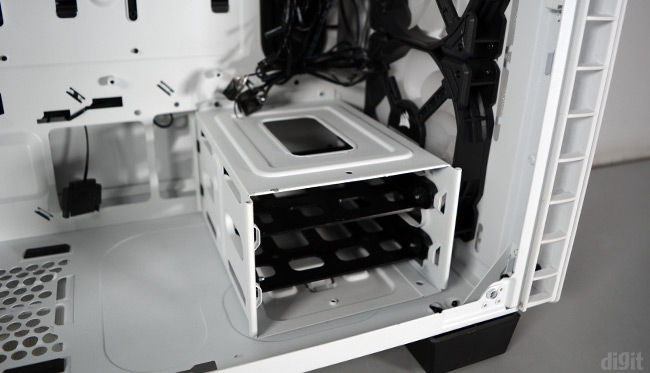 Three drive caddies can be found for SSDs behind the motherboard plate that can be installed without any screws. All you need to do is push them in. 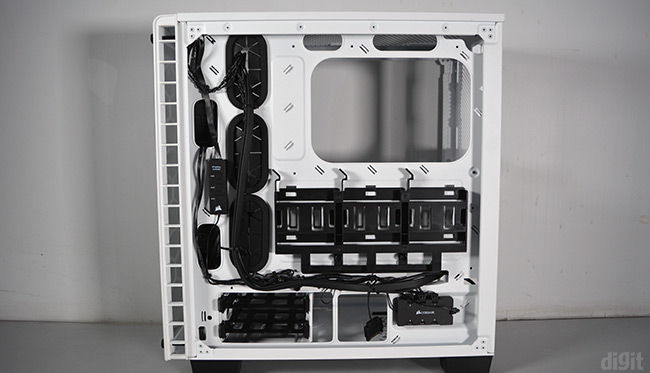 There are enough tie-slit points and cutouts on the plate to route the cables to specific components. However, we could have done better with some more room between the side panel and plate. There aren’t any grooves or routes for the middle section where most of the cables are located. This resulted in requiring some force to close the panel in the first assembly process. 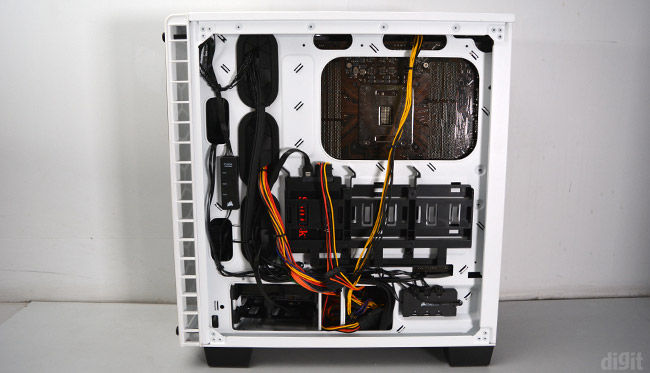 Corsair only ships the lighting hub supporting six fans, where the three pre-installed fans are connected. There’s no fan hub, so you will be restricted to the number of fan headers available on the motherboard after connecting the three fans. 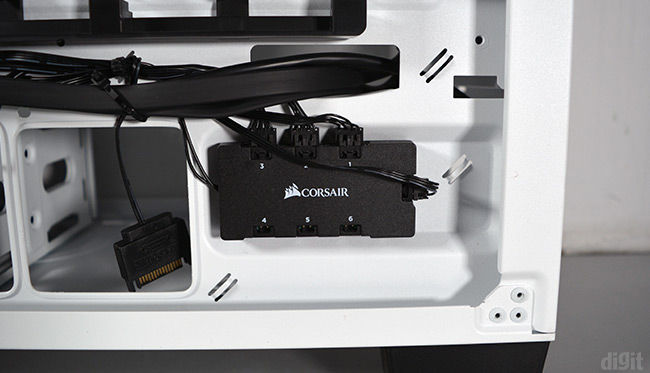 The lighting can also be controlled with the module installed inside the case. Since you can already control the lighting from the front I/O panel, the module inside becomes redundant without offering any additional control. 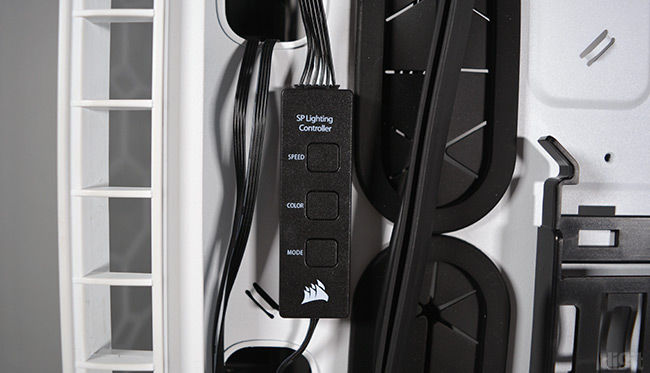 If you’re curious about our new and improved testing methodology, you can check it out in our review of the Corsair Obsidian 500D. For the Corsair 460X, in our secondary testing, the top and rear panel were used as exhaust with three 120mm fans. In this configuration, we were able to achieve more of a balanced air pressure inside the cabinet. We additionally tested the case with the front panel open to check how much of a difference will it make in the stock configuration. Our testing rig is as follows:
CPU: Intel Core i7-4960X
Motherboard: ASRock X79 Extreme9
Graphics card: Sapphire Radeon HD 7790
CPU Cooler: Noctua NH-L9x65
RAM: Corsair Dominator 2x8GB DDR3 (16GB)
HDD: WD Red 2TB
SSD: SanDisk Extreme II (240GB)
Power supply: Corsair VS450

The Corsair 460X performed really well in both the stock and secondary configuration. With just the three 120mm fans on the front pulling in the air inside the case, the open rear and top panel were able to let it all out without much of an obstruction in between. 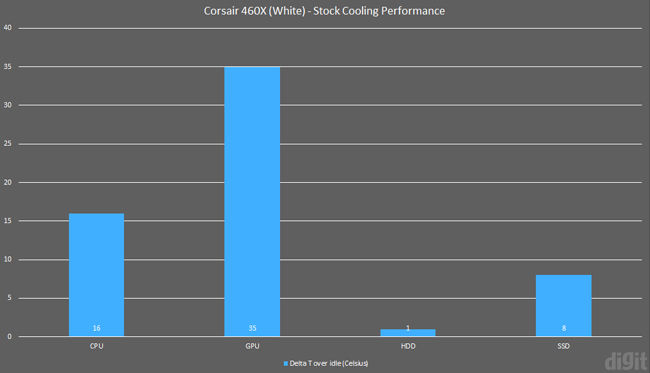 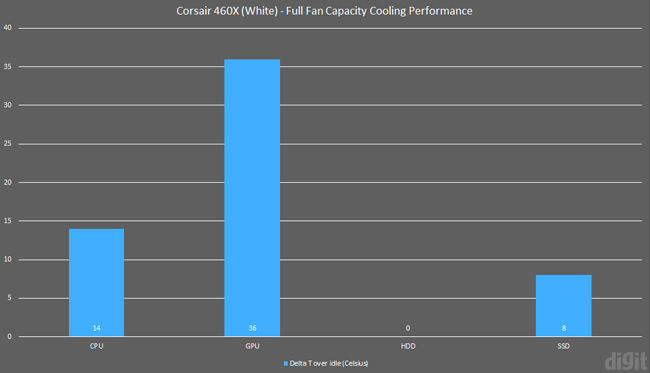 In the secondary testing, we were expecting significant improvement in the performance compared to the stock configuration. This expectation wasn’t met because the temperatures recorded with the extra fans installed were almost the same with a difference of one or two degrees. So, in order to achieve better cooling performance inside, installing more fans won’t do the job. 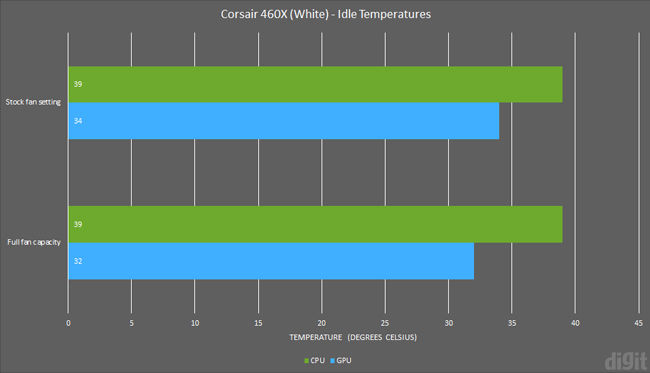 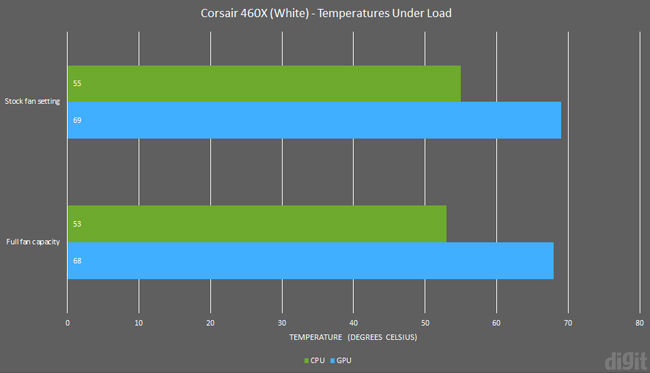 By running the stress tests with the front glass panel open, we were able to record a significantly lower temperature for the CPU under load. However, the load temperature was almost the same for the graphics card. 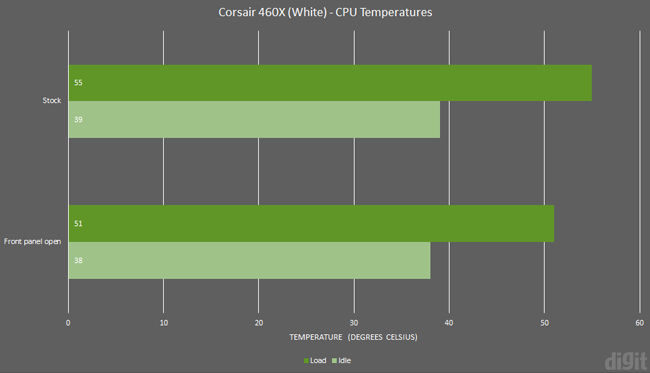 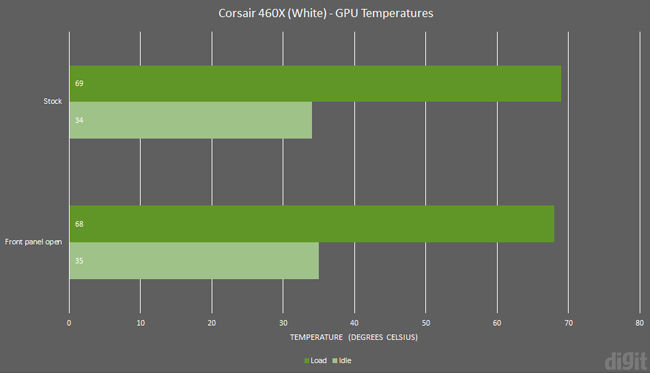 Compared to all the cases we’ve tested with the new testing methodology, the Corsair 460X performed neck and neck with the Fractal Design Define R6. 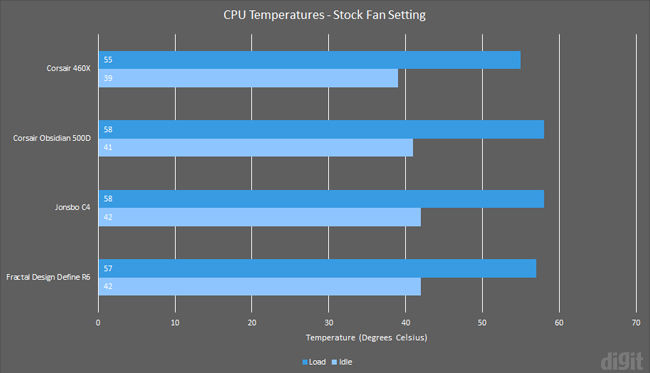 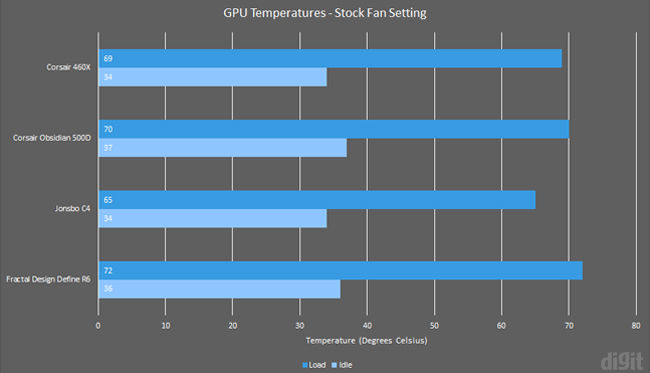