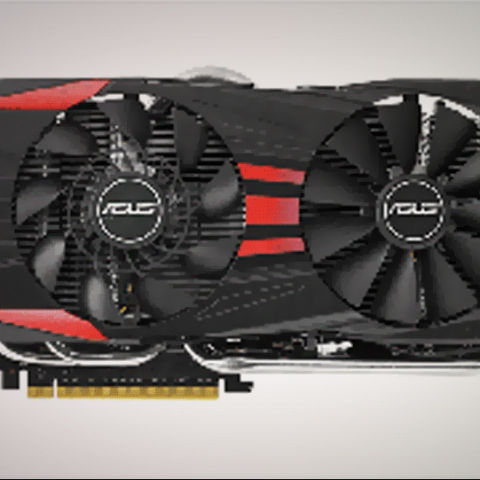 The card has a moderate overclock compared to the competing products and thus performs well but doesnâ€™t occupy the top spot. As far as build quality is concerned this card has more bells and whistles compared to the stock card and has enough metal on the body to dissipate as much heat as possible. The ASUS GTX 780 Ti is one of the top 10 cards that weâ€™ve tested this year so far.

ASUS launched this card mid-december which was roughly a month after NVIDIA unveiled the GTX 780 Ti reference model.  The card has a factory overclock of 954MHz  which is 78MHz higher than the reference card. It’s competitors have had similarly factory overclocked cards out but with a much higher increment. It’s not that ASUS couldn’t manage such a high overclock since we’ve seen ridiculously overclocked cards from them before. So we can expect something much more beefier card(s) to be released later under the ROG brand. Also the power requirement has been mentioned to be 375W for the ASUS card while the stock card has a need for 250W, this can be attributed to the factory overclock that these cards come with, but it still seems to be a bit on the higher side.

The build quality of the card can be said to be way better than the stock card but on par with the competitors. The Cooltech fan technology that we’ve started seeing on most of the ASUS cards seem to do a better job of cooling down the card at the base clock that the cards come with. However, the Hall of Fame SKU does a better job when the Turbo mode is switched on but with quite the increase in fan noise. You have the option of choosing which metallic accents you want on the card since it ships with golden and red coloured ones. The former matching the color of the Z87 series motherboard from ASUS while the red one matching the colour scheme of the ROG product line.

The card comes with a 3 year warranty and is priced at Rs.65,000(excluding taxes) which is a bit higher that what the competing cards have. The street price remains unknown at the moment and would make for a much better comparison between the competing SKUs.

Benchmarks
Now that there are plenty of cards in each segment from each manufacturer, we’ve decided to compare high end cards with competing SKUs from different manufacturers. We’ve even thrown a stock card in the mix. First off, we get to see that the ASUS GTX 780Ti DC2OC runs at the same level as the Hall of Fame edition from Galaxy and compared to a stock card it does have a slight advantage thanks to the factory overclock the card comes with. 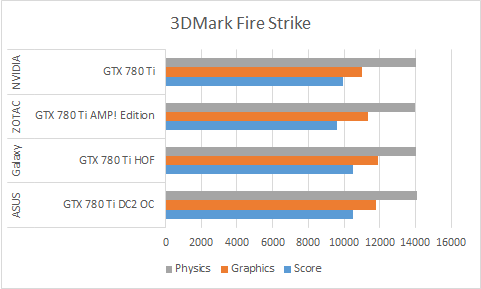 With gaming benchmarks the results aren’t that different from the competition, the graphs indicate a moderate difference in FPS scores. At ultra configuration the ASUS GTX 780 Ti DC2OC churned out 121.73  FPS which when compared to the 152.04 that the Hall of Fame card manages is a bit low. 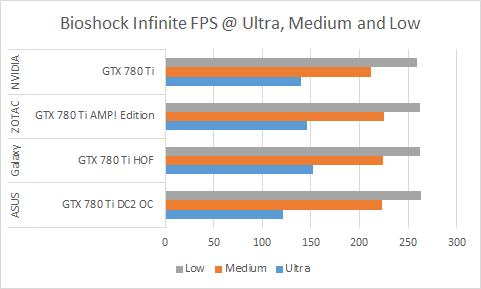 The scores in tomb raider seem to be well within error margin despite the other factory OCed cards sporting a much higher overclock. On medium and low configuration the differences do sprout out much farther. 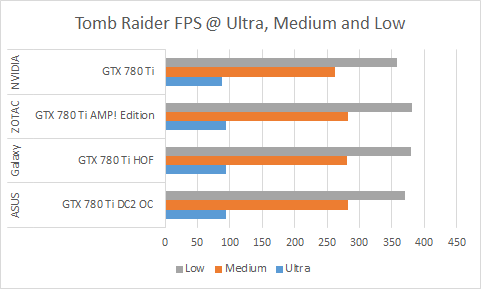 The same can’t be said for Hitman Absolution since the numbers scale as if in unison. 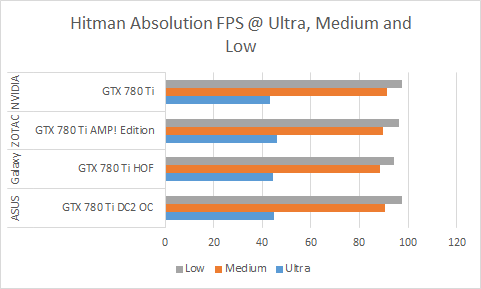 A similar pattern can be observed in the Sleeping Dogs benchmark wherein the stock card performance is easily trounced by the other SKUs. 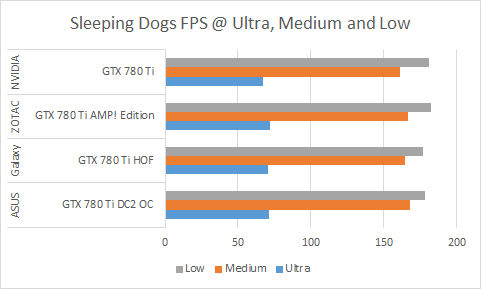 Temperature
Idle temperatures on all cards are within one degree worth of difference among themselves. However, on load conditions the Cooltech fan does seem to be working better than what the other cards have. The Hall of Fame card only beats the competition when the Turbo mode is switched on, otherwise the ASUS GTX 780Ti DC2OC seems to have the better cooling. 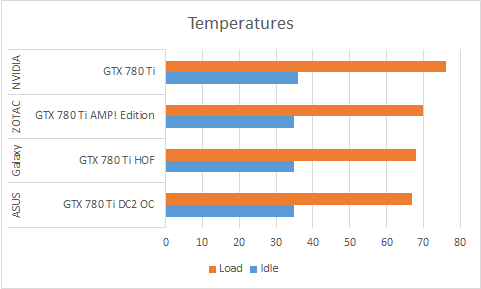 Verdict
The card has a moderate overclock compared to the competing products and  thus performs well but doesn’t occupy the top spot. As far as build quality is concerned this card has more bells and whistles compared to the stock card and has enough metal on the body to dissipate as much heat as possible. The ASUS GTX 780 Ti is one of the top 10 cards that we’ve tested this year so far.