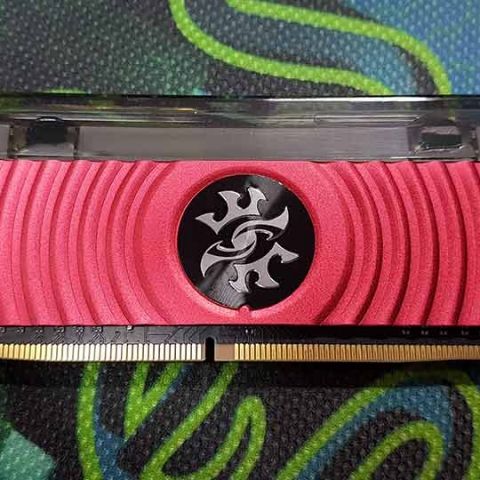 The ADATA XPG Spectrix D80 makes for a really exotic looking RGB memory kit. That’s just the looks, the hybrid liquid-air heatsink design is even more outlandish but not as effective. While ADATA’s claim does check out, the cooling efficacy of the liquid part is suspect given that it’s housed in a plastic chamber with poor thermal conductivity. However, there’s more to these modules that meets the eye because underneath all that fancy cooling are Samsung B-die chips which makes the ADATA XPG Spectric D80 a preferred kit among the enthusiasts.

ADATA came out with what it calls the world’s first hybrid liquid-air cooled RAM modules in the form of the ADATA XPG Spectrix D80. Liquid cooling RAM isn’t a new concept but those always had custom heatsinks, water blocks and lot of tubing to get the actual cooling done. The Spectrix D80 also has RGB LEDs making the entire module look really intriguing once turned on. ADATA has kits rated at 3000 MHz, 3200 MHz, 3600 MHz and 4133 MHz under the Spectric D80 lineup. The kit we received is rated for 3600 MHz and has two DIMMs of 8 GB each. We don’t have the price for this kit but a single 3000 MHz 8GB DIMM costs Rs.8,300 in India. We’ll update the review once we have the official pricing for this SKU. Meanwhile, let’s check out ADATA’s claims. 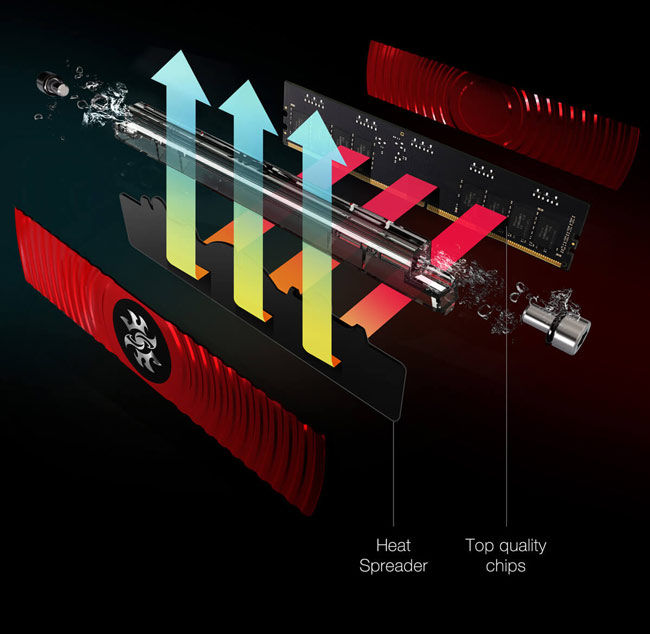 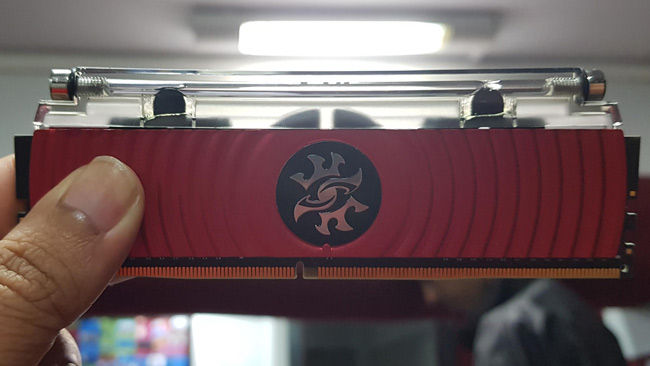 We held a module against the light and saw that the heatspreader made contact with the liquid at two spots on either side of the tube at about an inch from the screws.
So yeah, ADATA’s claim that this is a hybrid liquid-air cooling system is true. The simple fact is that there will be heat being dissipated by the heatspreaders and some of that will be conducted to the 3M liquid. However, the entire chamber in which the liquid is stored is made of plastic which is a really poor conductor of heat. So if the heat is being drawn in but not dissipated into the air by the liquid, then it’s simply not “cooling” at all. The cooling is being done by the aluminium heatsinks as is the case with all other enthusiast memory modules.

So does this mean that you shouldn’t consider the ADATA XPG Spectric D80? Not quite, there’s more to these kits than meets the eye. 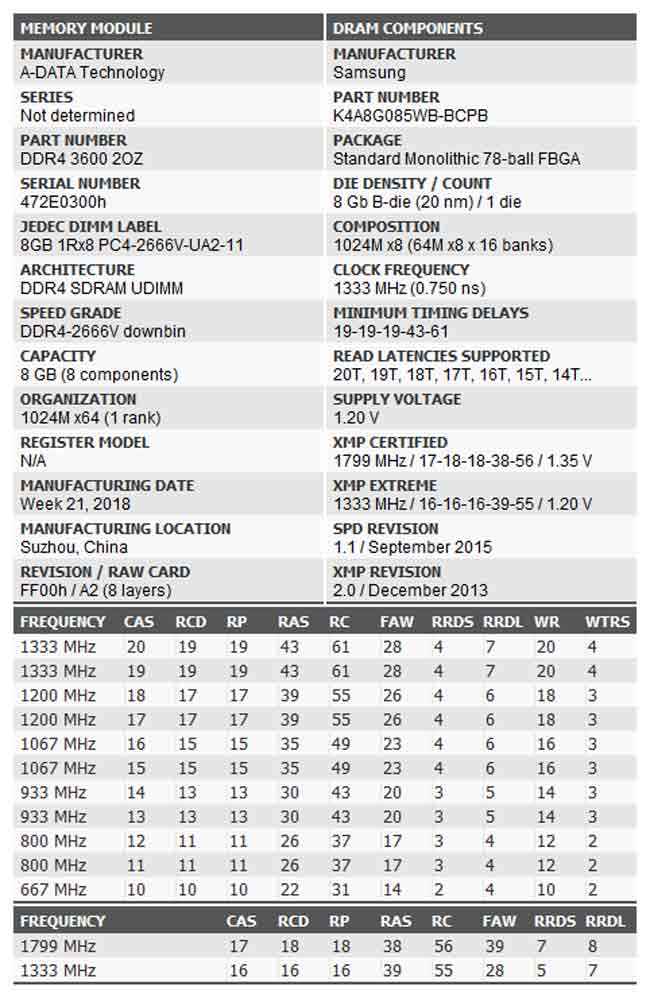 Upon reading all the SPD data, we find that the ADATA XPG Spectrix D80 uses Samsung B-die chips. This fact in itself is reason enough to warrant consideration. The two sides are stuck together ridiculously well so we couldn’t remove the aluminium heatsinks without causing damage. So we went and took a peek underneath to see all the memory chips on just one side of the DIMM. In the image below, you can clearly see eight chips on the top side. The metal heatspreader which makes contact with the liquid is also on the same side.

There are two XMP profiles on the module with the default one being 2666 MHz running at 1.2 volts and the exotic one being 3600 MHz @ 1.35 volts. The bottom half of the plastic piece that houses the fluid (3M Novec) has a translucent finish making it function as a diffuser for the RGB LEDs that are situated right underneath the plastic piece. 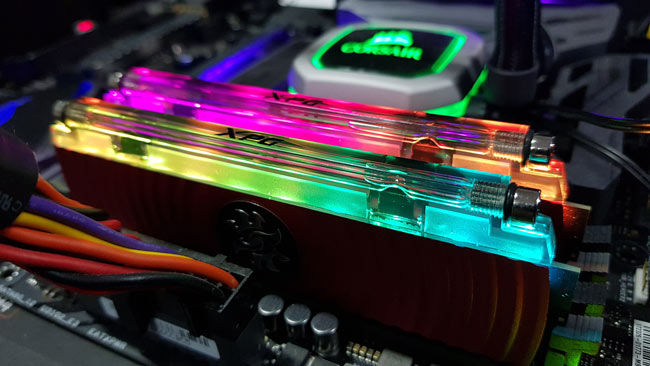 While the cooling capability of the liquid is suspect, there’s one thing you have to admit, the  modules look pretty groovy with the liquid bubble clearly visible. It loses its charm when placed vertically but in this horizontal orientation, we can see why people would want to buy the unit just for the aesthetics.

While these are Samsung B-die kits, they are also clocked at 3600 MHz which is pretty high. So getting these puppies to run at even higher clock speeds will be a challenge. We switched on XMP and tried pushing the FSB to get better speeds but the modules would fail to boot even if they were bumped by 100 MHz. We tried experimenting with timings that were akin to similarly configured B-die kits and none of them worked. So we went ahead with the benchmarks with what we had.

We started off with the AIDA64 Memory Benchmark with the RAM set to its XMP profile that’s clocked at 3600 MHz with the memory timings at the default 19-19-19-43. 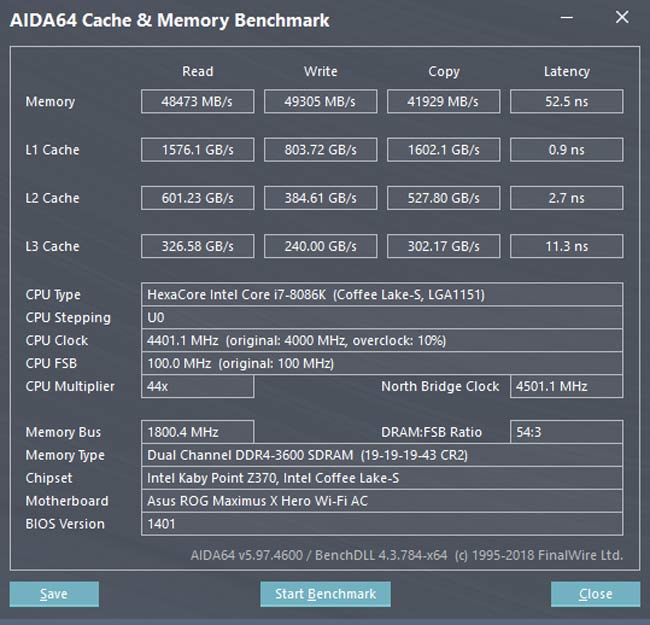 Next up was using Super Pi to check how well these modules compared to some of the other memory kits that we have. Clocking in at 420.433 seconds, these modules are pretty fast. We don’t have a thermal camera to check the temperatures but the thermal proper does a decent job too. At peak, the aluminium heatsink clocked in at 46 degrees Celsius which is about five minutes into the SuperPi run. 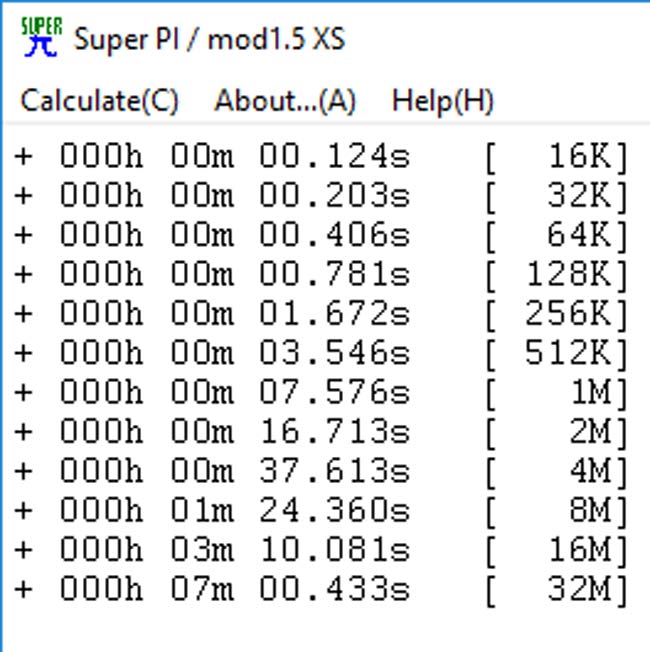 Here are the timings for the remaining runs on SuperPi.

The ADATA XPG Spectrix D80 makes for a really exotic looking RGB memory kit. That’s just the looks, the hybrid liquid-air heatsink design is even more outlandish but not as effective. While ADATA’s claim does check out, the cooling efficacy of the liquid part is suspect given that it’s housed in a plastic chamber with poor thermal conductivity. However, there’s more to these modules that meets the eye because underneath all that fancy cooling are Samsung B-die chips which makes the ADATA XPG Spectric D80 a preferred kit among the enthusiasts.