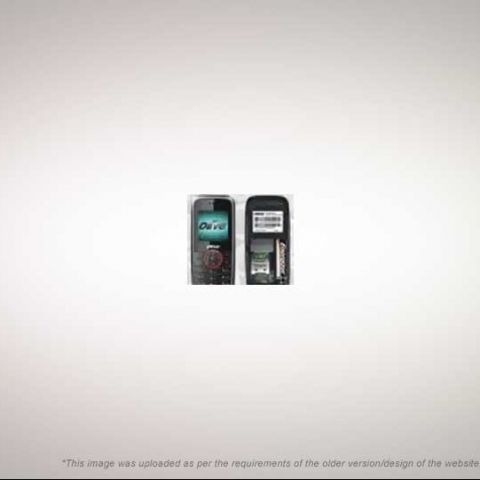 Olive FrvrOn V-G2300 is a 1.2 inch screen phone that is India's first dual powered mobile compatible with any AAA battery. It has the unique ability to recharge using the power from AAA battery, when the battery runs low on charge. Just pop in any new AAA battery and you are ready to go without even bothering to charge the mobile on an external power outlet.

The built-in FM radio provides dynamic stereo sound output which gives high quality sound, however, it lacks volume controls, as well as bass and treble equalizer, which would have given the user better audio usability. Its battery is rated to deliver about 100 hours of standby time and up to 3 hours of talk-time. The bundled accessories include: a Li-ion battery, a AAA battery, a travel charger, a stereo headset (that doubles as a handsfree set), and a user manual, adding up to the prerequisite features of a basic modern cellphone. The V-G2300 comes with a limited 100 days replacement warranty, which excludes accidental damages, as part of the one year product warranty.

The build quality of Olive FrvrOn V-G2300 is sturdy, with a soft and sculpted matte finish. The battery compartment is cozily built with a single door/dual sliding hook mechanism that compactly and securely fits the body shell of the mobile. The body shell is both light and well-armored with hard plastic which offers basic protection against scratches, and wear & tear. True to its sleek dimensions, the mobile weighs about 250 grams, even with the bundled accessories fitted on it.

The inbuilt applications on the Olive FrvrOn V-G2300 will satisfy the basic needs of professionals, such as the event reminder (termed as 'memo', which is capable of scheduling a maximum of 10 event reminders) that allows the user to set an alarm along with short messages/notes describing the event or appointment schedule. In addition, it includes an assortment of features like: alarm clock, calendar, stopwatch, time-zone and calculator.

Read on... to know how what tests we subjected the phone to, and how it fared...

We tested the call clarity for Olive FrvrOn V-G2300 both indoors and outdoors across various test zones. The call clarity was consistent and the signal strength remained uniform in all the cases. However, when we subjected the destination mobile to background interference like traffic noise or signal interference with another mobile, we found a slight fall in signal reception quality of Olive FrvrOn resulting in broken reception of words (for example “safari” was heard like “saf”). Although, there was no call drop and the signal reception was consistent on both sides (source and destination). The Olive FrvrOn V-G2300 clearly passed the call clarity test with consistent results – making it a good choice in the budget-friendly entry level category.

Our first notion about the keypad layout of Olive FrvrOn V-G2300 was that it was appealing. It exhibits a delicately designed contour of thin lines that divide the layout into four segments. The keys are of the hard-press variety, and in no way touch sensitive or offering a feather touch navigation through the menu screens. It often poses a stubborn challenge while typing lengthy messages due to lack of cohesive accuracy and touch-sensitivity built into the messaging system. Particularly, typing out the special characters is a cumbersome process, as it involves pressing the “1” numeric key multiple times to activate the special character key input and execute multiple trials to get the right character to be displayed on the screen. It however offers relatively fast messaging with some practice and fares better in comparison to its distant cousin, Olive Msgr V-G8000 (reviewed earlier). The left and right function keys are conveniently placed at the top of the keypad layout to offer quick and efficient navigation around the menu system. The navigation keys are strategically placed at the top center of the keypad layout to enable dynamic navigation through the menu/sub-menu system options. The phone appears to be an impressive candidate for an entry level phone, and it has such features as message broadcast and voice-mail, apart from a decent messaging interface.

Our FM-Radio Test involved only the manual mode, as Olive FrvrOn V-G2300 does not support auto search for FM channels unlike its cousin Olive Msgr V-G8000. We could fine-tune all the FM channels one by one and store them permanently with the pre-defined frequency numbers (tuned channel frequencies are highlighted in red). There is no scope for using user-defined names for channels (unlike Olive Msgr V-G8000). Also, it is imperative that the user remembers the channel frequency numbers in order to switch between channels by using the option: press the left function key > select set frequency and type the channel number. The inability to store the FM channels on a favourite list or switch between channels from the stored list is a major drawback in the phone's FM radio interface. We also observed a minor glitch that caused weak signal reception quality of some FM stations. The built-in dynamic stereo system coupled with frequency sensitive hands-free/headset delivered good performance in terms of consistent sound clarity and dynamic bass that adjusted to each music flavour. Thus, Olive FrvrOn passed the FM-Radio test with consistent results in terms of sound amplification and clarity (faring better than Olive Msgr V-G8000). However, it lost out on with the lack of an auto-search feature and of a user-friendly interface (Olive Msgr V-G8000 fared better in user-interface test)

Read on...to see more tests results, such as the sound/speaker test and the battery life test, as well as our final verdict on the phone....

Olive FrvrOn V-G2300 ships with a pack of twenty clear and distinct polyphonic ringtones which offer both soothing and ambient sound performance. The sound/speaker system delivers soft and clear voice transmissions during calls at the factory-tuned fixed sound volume. The phone does not have support for manual sound volume adjustment (increase or decrease) – neither during calls nor while playing FM radio, unlike its cousin, Olive Msgr V-G8000. The sound system performs best with a hands-free/headset, and produces distinctly clear and dynamic stereo output. However, the sound output through the built-in speaker produces a rough overtone of sounds and does not live up to its own headset standards of dynamic stereo system. Thus, the only plus points to take home in the sound/speaker test are the dynamic stereo and consistent sound clarity throughout the test, experienced with the hands-free/headset plugged into the port.

We performed two cycles of battery tests: one with factory charge (more than 90% charge unused) and then the other with full recharge (100% charge) using a travel charger.

The Olive FrvrOn V-G2300 delivered 20 hours of battery life including usage time and standby time till it indicated “battery low” status on factory charge. Under normal usage conditions, it delivered 3 hours of FM music, 30 minutes of talk-time and about 16.5 hours of standby time. When the battery ran out of charge, we popped a AAA battery into the slot. The Li-ion battery recharge through AAA battery lasted for about 5 to 10 minutes and then the AAA battery drained out completely. The mobile battery recovered almost 20 to 25% of charge during this period. Thus, it proved a very efficient way of recharging the mobile quickly, considering the AC/DC charger takes about an hour or two for a full battery recharge from “battery low” state.

Olive FrvrOn yielded about 34 hours of battery life including usage time and standby time, which consisted about 1.5 hours of talk-time and about 32.5 hours of standby time.

With the onus solely resting on price to performance and price to features ratio, Olive FrvrOn holds its own in both the categories to emerge a strong contender in the 'wallet- friendly' entry level category. It is competitively priced at Rs. 1,699 and fittingly vies for top honors in the “value for money” segment of entry level mobiles in the Indian market.