Part of the reason for the company’s growth is the onslaught of smartphones with small differences in feature and hardware. More recently, the company announced the Honor 8X powered by the Kirin 710, sporting the largest display in it’s price segment and now, Honor quickly followed it up with the Honor 8C, priced just below the former. The Honor 8C also marks the debut of the Qualcomm Snapdragon 632. With the Snapdragon 625 now looking ancient, the Snapdragon 632 is meant to be the go-to chipset for affordable mid-rangers. With a new chipset under the hood, and priced just shy of the Honor 8X at Rs 12,999, does the Honor 8C offer everything you need from a smartphone? Let’s find out.

What's in the box?

The Honor 8C takes after the Honor 8X and other Honor phones launched this year with their gradient colour design. While it’s not as blingy as the Honor 9N launched earlier, the Honor 8C is made to be more durable. It switched from glass to polycarbonate but maintained the shaded colour treatment. Honor calls it ‘Cat’s Eye’ design as the aurora blue variant forms shapes seen in cat’s eye when reflected against light. It’s easily one of the best looking phones in its price range, and will compete against the Realme U1 in terms of the design.

While polycarbonate is indeed more durable than a glass body, it’s quite prone to scratches and bends. It does seem like the Honor 8C has no flex and is actually quite sturdy, but for safety’s sake, it’s advisable to slap a case on it. The phone also feels quite light despite packing a large battery, but it’s tad too tall to use it one-handed. 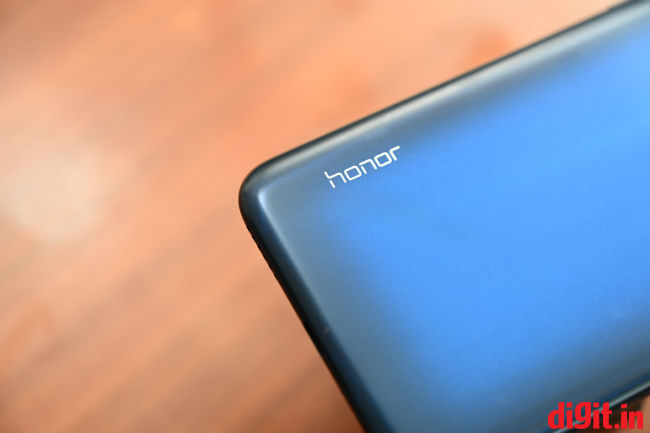 'Cat's Eye' is what Honor calls this design

The front is all screen. Like in all Honor phones launched this year, this too has a notch on top, but it’s not as invasive as say the Xiaomi Redmi Note 6 Pro. There are some space on both sides of the notch to display notifications and status bar icons. The Honor 8C’s display has only 720x1520 pixels. In the face of the Realme U1 and even the Honor 8X, it’s clearly underwhelming. The brightness levels, though are thankfully higher than that of the Realme U1, and as a result, it’s a little more legible outdoors. 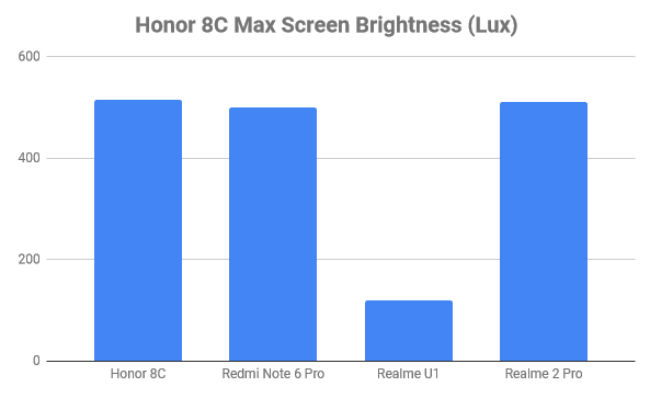 Watching movies or reading an article, on the other hand is good enough. However, if you like to stream from Netflix or Amazon Prime, you will be disappointed at the lack of Widevine L1 certification which means it cannot stream from these services in fullHD.

Honor advertised that the display has an eye-comfort mode that is TuV Rheinland certified, meaning that the blue-light filter is certified to be protective for your eyes. Turning it on while reading something at night will, on paper, give you a better sleep, but since I have messed up sleeping hours anyway, it didn’t really make much of a difference save for putting a warm yellow tint over the panel. 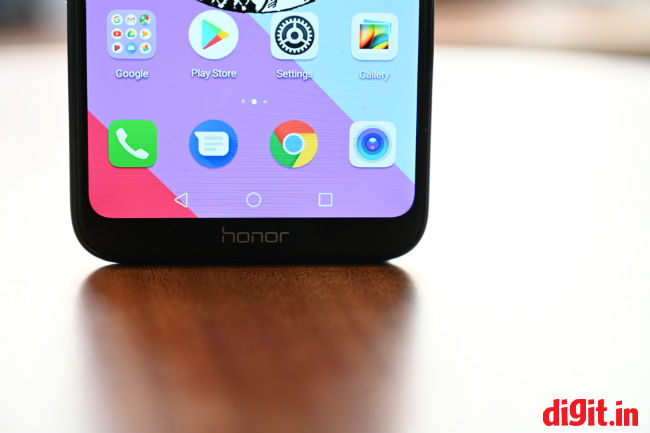 The display’s colour temperature is on the cooler side by default, and Honor does offer the option to change the colour temperature. There’s also the option to hide the notch and you will have to manually select the apps you want the notch to be hidden for, which is a bummer. I particularly like the way OnePlus tunes the most popular app to either make space for the notch, or hide it completely. Considering how Honor hoots so much about AI in their smartphones, automatic adaption could have been one feature I would have liked to see. 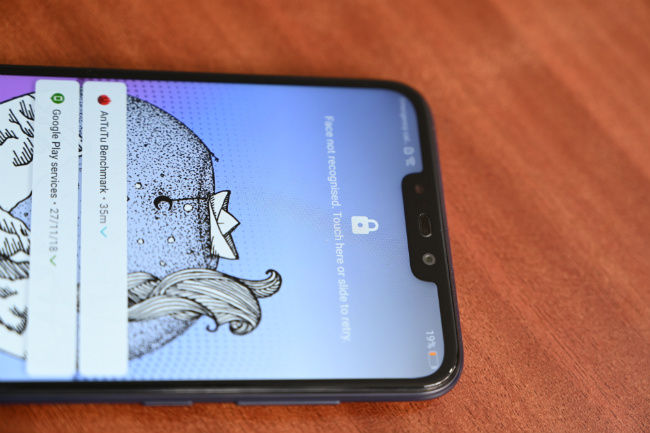 And then there's the notch

Overall, the Honor 8C feels good in the hand despite having a plastic body, and the display, while not the best, is just about functional. 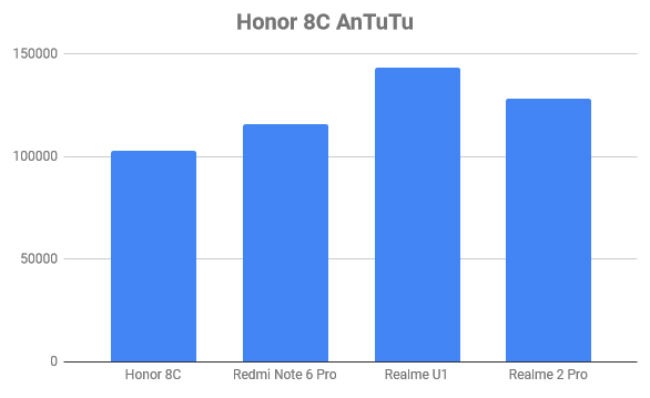 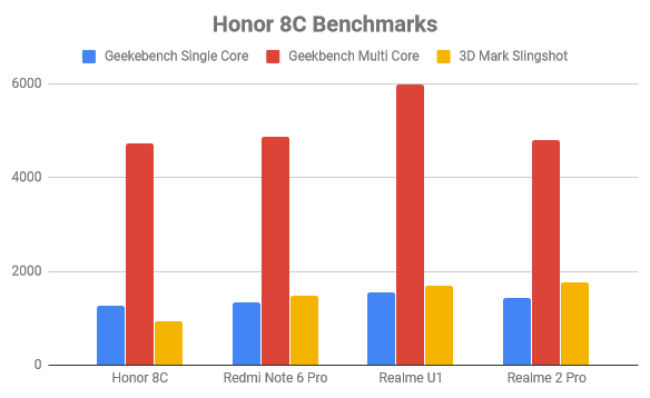 Nevertheless, the Honor 8C offers good enough performance for the price. On AnTuTu, the Honor 8C scored 103144 against Redmi Note 6 Pro’s 116046, indicating it’s only slightly less underpowered than the Snapdragon 632. Even on Geekbench 4 Single and Multi core tests, the difference isn’t as much. The Honor 8C scored 1269 and 4723 respectively while the Redmi Note 6 Pro scored 1332 and 4861 respectively. The Realme U1 powered by the MediaTek P70 seems to be a better option out of the three with the phone acing every test in our reportoire save for that for graphics processing.

While using the Honor 8C as a daily driver, it’s easy to see where the phone falters. It’s perfectly adept at doing the basic stuff — Social media browsing, phone calls, quick replies to texts and the likes. However, it isn’t the best when it comes to multi-tasking. There’s a significant delay in app switching when you double tap the recent key. There are also stutters while scrolling in apps like Facebook. In gaming, the phone leverages Huawei’s GPU Turbo to improve gameplay in certain games like PubG Mobile. PubG Mobile itself ran on medium graphics but with no visible drop in frame rates. The notch doesn’t hide itself automatically while playing a game and you have to manually turn it off by whitelisting the game.

The Honor 8C runs on EMUI 8.2 based on Android Oreo 8.1. The new version of EMUI, while not the most aesthetically pleasing, does bring a lot of useful features. It has Huawei’s gesture-based navigation which isn’t all that intuitive and copies the iPhone blatantly. I particularly liked EMUI’s detailed battery usage panel. It breaks down battery usage in the form of hardware and software, and for each app, you can see how much CPU, RAM and battery has been used apart from how long it has been running and how much data it has consumed. Such granular metrics are useful for enthusiasts who like to keep an eye on their usage.

Honor didn’t say when the Honor 8C will receive an update to Android 9 Pie, but we hope it comes soon considering the Mate 20 Pro already ships with EMUI 9 based on the latest version of Android. 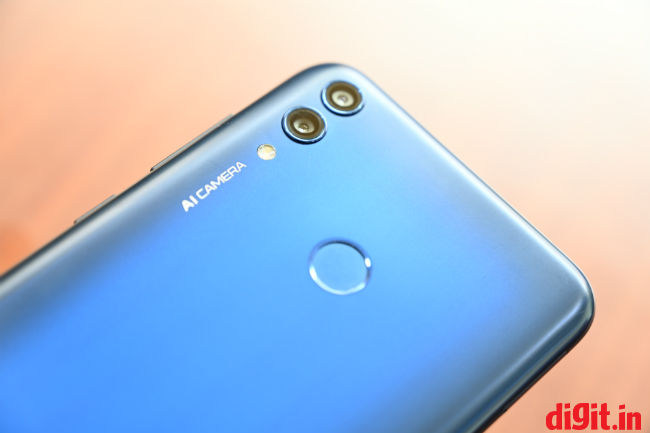 First Honor phone at this price range to rock the AI Camera moniker, but we wish it made a difference

Honor’s likes to highlight the rear camera on its phone a lot, and even on the Honor 8C, the focus is largely on the cameras that are blessed with AI capabilities. It’s actually the first time an Honor phone worth Rs 11,999 is sporting the AI camera moniker. It turns out the moniker is more of a marketing gimmick than anything useful. The Honor 8C makes use of a 13+2MP rear camera setup. The primary lens has an aperture of f/1.8 along with PDAF while the secondary camera is used for depth calculation. On the front is another 8MP shooter with f/2.0 aperture. Both the front and the back camera can shoot portrait shots. 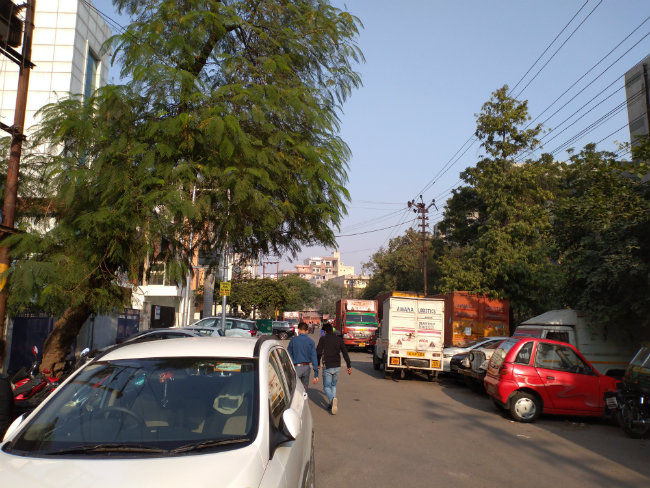 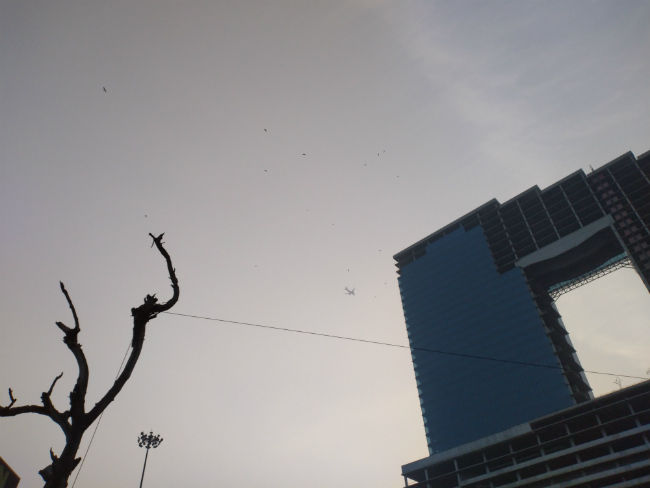 The Honor 8C manages to take decent images in the day. While the photos do look good on the phone’s display, looking at it in a larger screen shows the weaknesses. Landscape shots lack the crisp sharpness we have seen in some Redmi phones in that price range, and the dynamic range in the final JPEG result also isn’t all that wide. There’s minimal details in the shadows and if you try to bring them out in post-production the image becomes unusable with a lot of noise. Colours come out pretty good though. The blues in the sky and the greens in trees are tuned to come out more saturated, making the final result look a little better. The AI mode, in this case, recognizes the      pretty fast but it didn’t appear to do anything significantly different or for that matter, better. 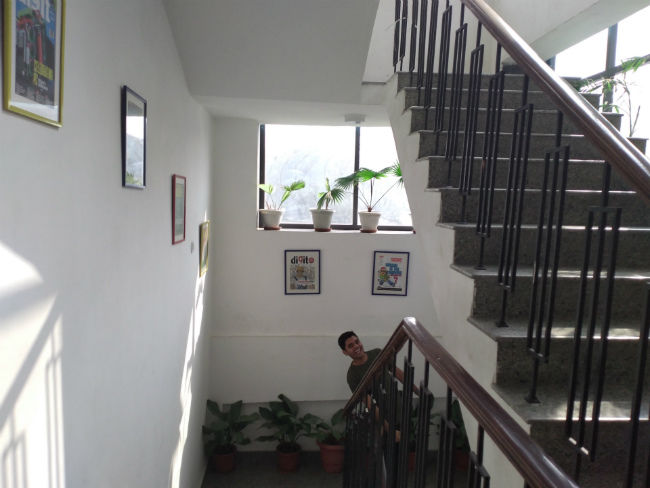 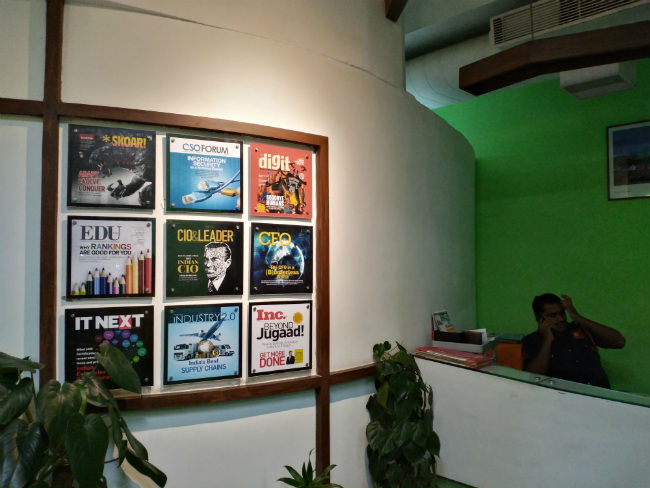 Moving indoors, the camera performs well enough when there’s enough light. Closeup shots of object have the required sharpness to bring out the minute details. It also captures enough light thanks to a wider aperture, and we didn’t notice any significant amount of noise especially in indoor photos shot in the evening under fluorescent light. 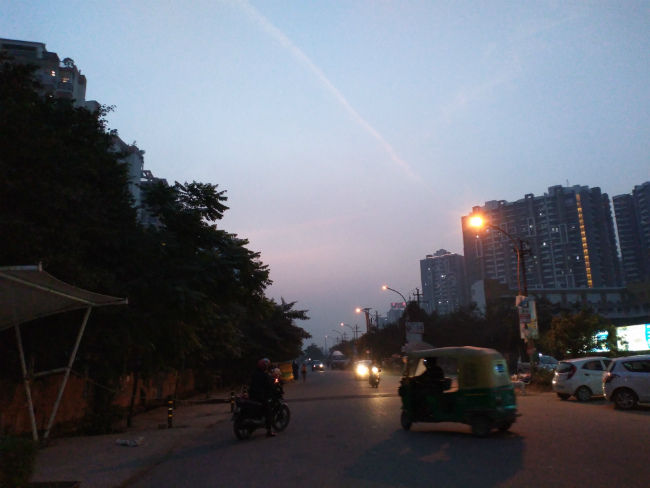 Despite a wider aperture, the camera fails to take good low-light shots. It’s also wrong to expect good low-light performance in this price range, but in case of the Honor 8C, the amount of noise in the photos is too high to be considered even for social media. There’s also a painting-like effect in the photos with the edges of objects appearing smudged. Clearly, this isn’t the best camera for low-light shots. 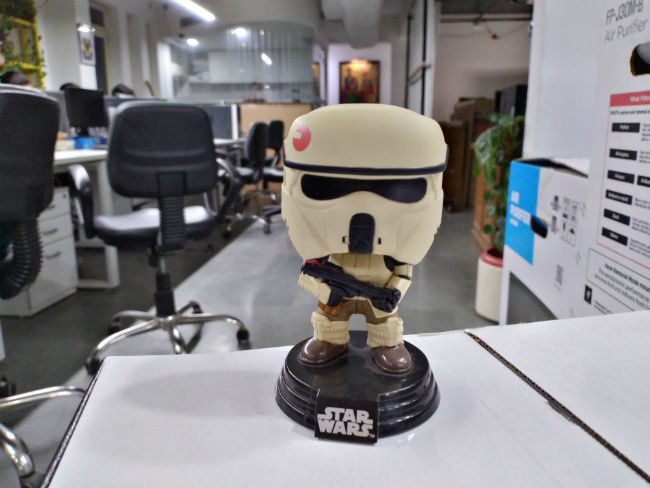 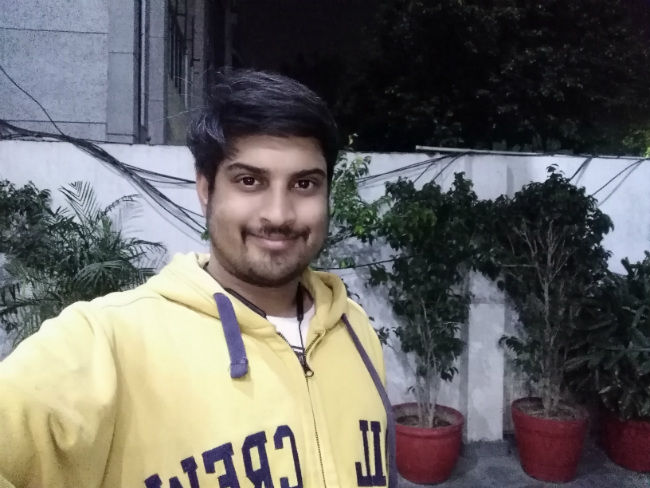 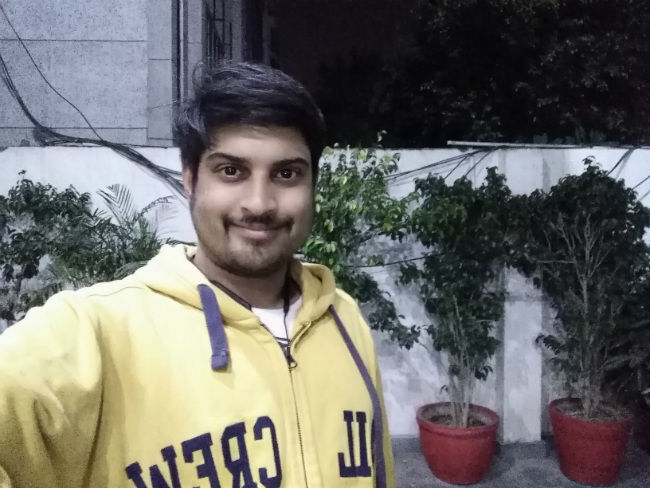 The 8MP sensor up front is paired with a selfie flash that Honor claims improves selfies in low-light. However, in our tests, the flash only made increased the highlights in the skin, making the skin glow unnaturally, losing out on all the granular details. 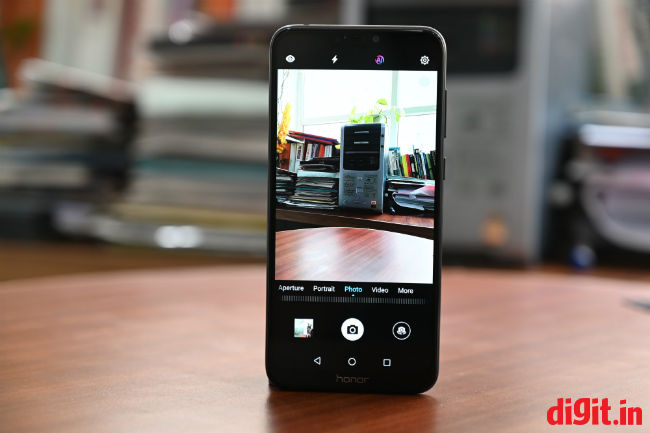 Honor's camera UI takes some time getting used to

The camera also offers various modes like AR Lens that is basically a cheap gimmick where your face is superimposed against a particular background. The application is anything but good and it’s better to simply avoid this mode. 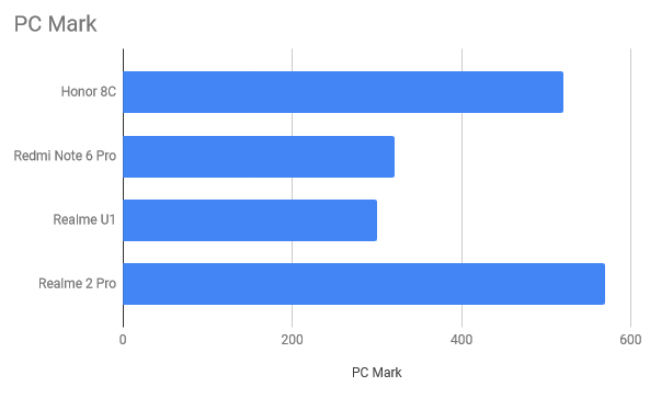 The Honor 8C packs a big 4,000mAh battery that is one of the good things about the phone. The 4,000mAh battery is well-optimised to deliver one and a half days worth of charge easily. We got around 8 hours 20 minutes of usage on PCMark’s Work 2.0 Battery test which should convert to two days of usage if you are using the phone moderately. Gaming drains the battery quickly though. One session of PubG (30-35 minutes) drained the battery from 65 percent to 51 percent. You should hope the battery lasts long enough so that you can plug in the phone when you’re going to bed, as the phone doesn’t support fast charging. It takes around 2-2.5 hours to fully top up the phone.

The Honor 8C is a good phone to consider if you’re not much of a power user. While the phone does look good because of the colour treatment, the presence of too much plastic might put people off, but it really should not. The performance, at least on paper, is almost as good as that of the Redmi Note 6 Pro, but the latter is visibly more responsive across the board. It’s fine if you’re not much of a heavy user, as the battery life is particularly good on this phone.