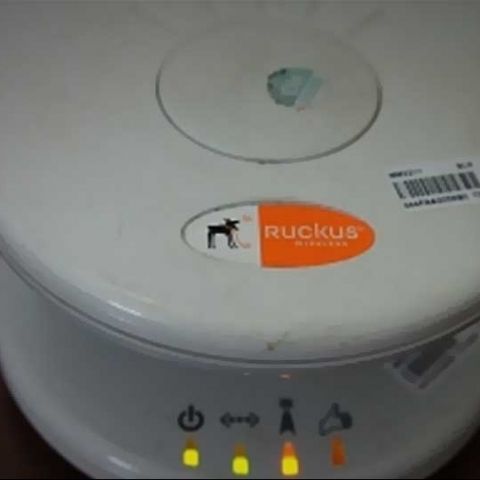 Tikona attempts to reduce the roadblocks usually faced by a wireline home broadband network, and mostly does well if you are within the service area. We got good speeds and ping rates most of the time. But even on what is essentially a 4G (OFGM and MIMO) network, we did face the same issue of speed drops and connectivity loss at times, just like on a 3G network. Unfortunately, service reliability is not as solid as we had hoped for, and it can be very frustrating.

Before we start off with the review, let me just get a fact out of the way. I have used Sify Broadband, Tata Indicom Broadband (came rather close to using BSNL broadband as well) and Airtel Broadband over the last half a dozen years, and the experience with Airtel has been the most peaceful. The service is reliable, speeds are delivered as promised and the response time in case of a fault is quite quick. For consumers, Airtel Broadband is a sort of benchmark that they can compare any rival services to.

When Tikona responded to our call for a review connection to test the service, we were in the driver’s seat to experience what the new wireless-broadband hype has been all about.

Installation & Hardware
Let us just run you through how the installation process works. First, the installation team will identify the position of your home in relation to the tower that services the area. From what the engineer explained, the service is offered only up to a maximum of 300-400 meters from an individual tower. Critically, you need a line of sight with the tower as well, because there is a greater chance of service failure / non-connectivity later, if that isn’t the case – reflected signals aren’t something you can install your connection based on. In my case, we had the tower and the outdoor equipment looking directly at each other, with the outdoor unit on the 8th floor and the tower on the next building on the 14th floor, with nothing in-between.

Essentially, there are three pieces of hardware that are installed, also known as Customer Premises Equipment (CPE). One is the outdoor unit, which connects wirelessly to the service tower. That is connected to a powered intermediary device, from which the connectivity is sent to the router, which sits indoors. In comparison to something like an Airtel Broadband, this one doesn’t need wiring to be run up to your home, right from the junction box outside the apartments. Does save time, resources and a lot of headache!

Once installed, the calls are then made to the “back-end team” to activate the service, on the installed hardware. It is a matter of luck with regards to how quickly the service will be activated – depends probably on the requests pending with the team already or probably their mood on the given day!

Speaking of the hardware, the outdoor unit needs to be mounted and secured. If it moves around, chances are the link with the tower will get disturbed. The indoor unit – the router, along with the tiny intermediary box, need power. The router does have a very unique shape. And it is named as Ruckus, which is a rather different name too! Multiple notification lights on the front, but no power on/off key on the device. Compared to the Beetel 450 Wi-Fi router that Airtel Broadband offers, this one does seem rather inferior. The Beetel, in addition to the Wi-Fi, also has the option of connecting 4 devices to the router, via the wired network. Tikona’s Ruckus doesn’t have any ports to connect more devices via the wired route. That is rather unfortunate.

Features & Plan Details
For our review connection, we were offered the ADULM4096 plan, which is the fully loaded monthly tariff package offering. As a part of this plan, they offer 4Mbps broadband speeds, and it clearly looks like it has no Fair Usage Policy limits on it. Nothing is mentioned on the website regarding any limits, and neither did the installation engineer have any details on that. We have used it for quite a while now, and do not see any FUP limits seemingly kick in either. Be sure to confirm the FUP limits on the plan that you select before selecting the plan.

For the plans that do have a FUP, Tikona uses a slightly different implementation of it. Unlike other operators who will straightaway chop your speeds down to 256kbps (Airtel, for example) or 512kbps (BSNL, for example), Tikona changes the contention ratio. For example, the default ratio is 1:4, but that will go up to 1:16 or something like that, once you cross the data usage limit.

One thing that is slightly inconvenient is the fact that you have to sign in and sign out from the account every single time you connect to the Internet, with your User ID and password. And this is true for every individual device that you may wish to use this service on. And is particularly inconvenient on a smartphone or a tablet. Plus, clean the browser cache, and chances are that you would have cleaned up the auto-saved ID and password as well, and send you scurrying to retrieve it from some sheet of paper saved somewhere. In comparison to this, Airtel Broadband is far more convenient – switch on the Wi-Fi router, and the connectivity arrives in all devices where that network is saved. No need to sign in or sign out.

Unfortunately, there is a limitation with the entire package. You cannot sign in to more than 3 devices at a time. This is because you need to sign in individually from each device before you can start using the Internet. Some users have found a workaround for this – by connecting the Ruckus unit to a Wi-Fi router. Sign-in from any machine, and then you can browse on any other device without having to sign in again and again. We have not tried that, and wouldn’t recommend it either, for the sake of service consistency and reliability.

Performance
Since this was a 4Mbps plan, we were hoping for a much quicker broadband experience than what my 2Mbps Airtel connection offers. And for the most part, the speeds were fine. We even recorded a test that showed that we getting a full Mbps more than the promised speed! 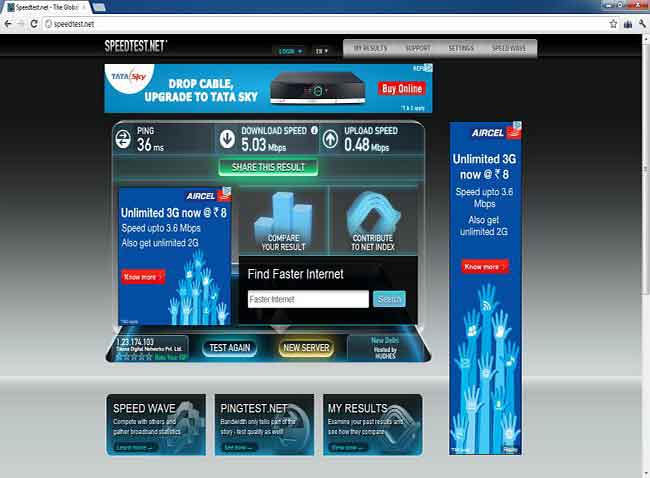 We got 4Mbps at most times, but the speed delivery scenario isn’t as stable and consistent as what Airtel offers over the wire-line broadband.

The screenshots will prove that speeds do tend to drop, but there is no fixed time of the day when that happens. Transfer rates, as expected, hovered between 380 KB/s and 410 KB/s when the speed was as promised. When the speed is close to normal, ping times were always slightly lower than the ones Airtel offers, something that may be critical for the gamers.

A couple of issues with the service, though, and we begin first with the CPE devices. The wall plugs for the two devices are huge – width, length and thickness, and they will not fit in two side by side points even on the back of a big UPS. We have seen enough smaller sized plugs to know that such a thing exists in the real world! It is a surprise how this got through the Tikona team who must have finalized the hardware. Also, am not sure how many people will have two wall sockets lying free in a room, for these two indoor devices to hog. Maybe Tikona should be ready to offer a three-way plug or something.

Secondly, the connection dropped out at least once a day – from the Ruckus router to the connected laptop. So much so that even the Tikona login page refused to open. Weirdly, Airport notification icon on the Mac or the wireless connectivity notification on Windows did not show any exclamation marks indicating loss of connectivity. Since there is no power on/off key on the router, you have to turn it off from the wall socket itself, and restart it. We did the reset thing – unplug the device from power for 20 seconds and plugged it again. It has been 3 days since, and the same issue has not crept up. 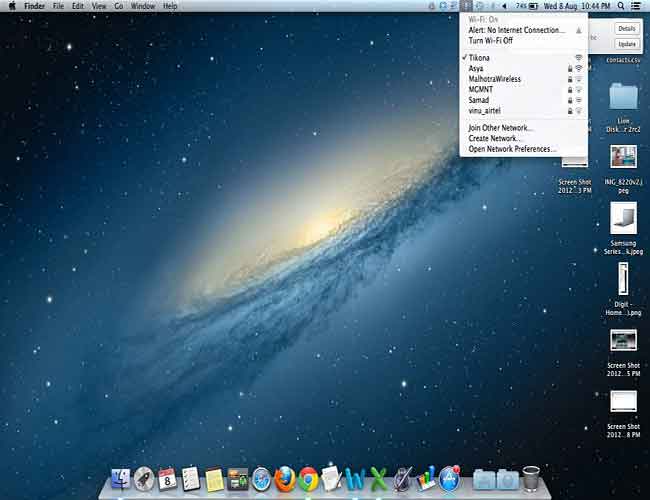 Third is the issue when there is a complete loss of connectivity of service – from the service tower to the CPE. A latest screenshot of this shows that error message. This has happened with us quite a few times for us to be comfortable about the reliability of service anymore.

Bottom Line
If you are considering a buying a broadband connection, or shifting to another service provider, we would recommend that you first check if there are the traditional wireline ADSL operators like Airtel, BSNL or MTNL in your area. If yes, consider them. Unless that isn’t an option, we would only recommend a wireless service then. For all the benefits it may offer in terms of ease of installation and possibly better speeds than what an Airtel may offer in your area, a wireless service does have inherent problems – connectivity drops, signal loss, speed fluctuations and at times even tower overloads that lead to slow speed and pings.

Overall, we appreciate the effort of the Tikona team, and the service does have some solid foundations to begin with. First, the speeds on offer (up to 4Mbps) are more than what Airtel offers in my area for example (only up to 2Mbps). Second, the tariff plans are also less expensive than the likes of Airtel, BSNL and MTNL. Third, the removal of any FUP on most plans is something that we praise and welcome wholeheartedly, hoping this will knock some sense into the operators who still believe in the ridiculous concept of FUP.

But, there are still some tweaks to be made before Tikona can be a recommended service. First off, the manual login and logout system needs to be done away with. If security is the concern, you need to probably lock the router with the user ID and password, but at least make it simpler for users to connect to the Internet. Secondly, the service reliability needs to be more robust, because we aren’t sure how many subscribers will be geeky enough to understand why the Internet isn’t working, or will have enough patience to call the customer care every other day.