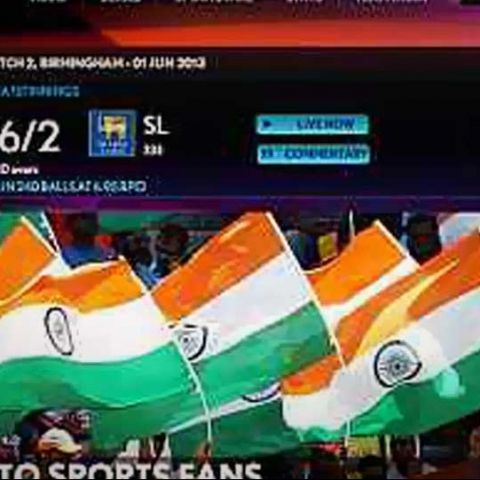 Going by the excellent streaming experience that StarSports.com offers, we could do well to not argue with the wife, the cable/DTH operator or the electricity company, anymore. As long as you have a broadband connection available (get a UPS for the router, people!), StarSports.com will do more than enough to keep you close to the action. At the moment, the service is completely free. However, that may change in the future. Also, while the streaming is excellent on connections with good speed, it is a tad fussy if the speed fluctuates or drops. We would recommend you check this out during the upcoming ICC Champions Trophy.

As the high-pitched campaign suggests, watching a cricket match does mean treading on quite a few toes. And getting our own toes treaded upon as well. And the campaign isn’t exaggerating! It does happen. Which is why, rather than pull your hair out or gnash your teeth because you are missing out on M.S. Dhoni ticking the scoreboard over as India head for victory, you now have a solution.

Start: How it works, and where can you access it
The idea behind this service is simple – provide you an alternative to catching the live cricket match on the plain-Jane TV. The service, StarSports.com is owned by Fox International Channels (FIC – though you would recognize them slightly better as ESPNStar). At the moment, the focus is on streaming cricket matches, Live, particularly the ODI’s or T20’s that Team India is a part of. Since Fox has the broadcast rights for cricket matches played in India, England and Australia, they do have a lot of content waiting to be fully utilized. Till now, the focus has only been on matches featuring India, but the upcoming ICC Champions Trophy will be streamed in its entirety, including the practice matches.

To get this service, you need to point the web browser to www.starsports.com via your PC or smartphone or tablet, and get access to the complete website and the streaming features. The desktop version and the mobile optimized version work well across devices, but the streaming part is currently unavailable on some iOS devices.

StarSports.com: What it is all about…
From the outset, it looks pretty much like a cricket news website, like there are a dime and dozen out there. But, as they say, first impressions can be deceptive. Beyond the typical news and match reports on the home page, sit a wide variety of stuff that you are unlikely to find on another website in the genre. 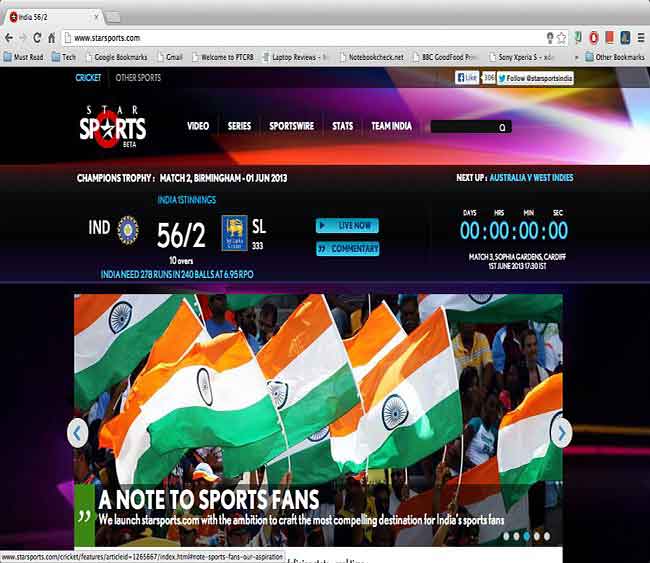 This is the homepage for StarSports.com, and on the face of it, looks like just any cricket news website! The surprises await!

On the home page, there is the typical mix of news, features, match updates and scores, and the countdown for the next important match. On the top are the simple options, but the very ones that make this website stand out in the crowd – Videos, Series, SportsWire, Stats and Team India.

The various section of StarSports.com do hold a lot of interesting data, statistics and photos that any real cricket fan would love.

While most of those sections are sufficiently self-explanatory, the SportsWire one is rather interesting. With sub sections like Gameplay, Archives, Columns and Photo Gallery, there is a lot of content that a true cricket fan would enjoy. We are particularly huge fans of the Photo Gallery, since it is the host to some of the memorable snaps from yesteryears. And cricket fan worth their salt would definitely browse through these galleries, and surely remember having read, heard or seen highlights of some of the old matches captured here.

Now, for the most important section, the Videos. This is the section, and the content it holds within itself, is what defines StarSports.com as a distinct entity, something none of the aspiring rivals can offer. Banking on the fact that they have the television and internet broadcast rights for all BCCI series’ in India, and in countries like England and Australia, StarSports.com offers Live streaming of some cricket matches. At least that was till now, for series’ involving Team India. However, the upcoming ICC Champions Trophy will be streamed in full, including the warm up matches preceding the tournament. If the streaming aspect becomes a full time entity for all forms of the game – ODI’s, T20’s and Test cricket, it will effectively be the like for like replacement for the broadcast on TV. 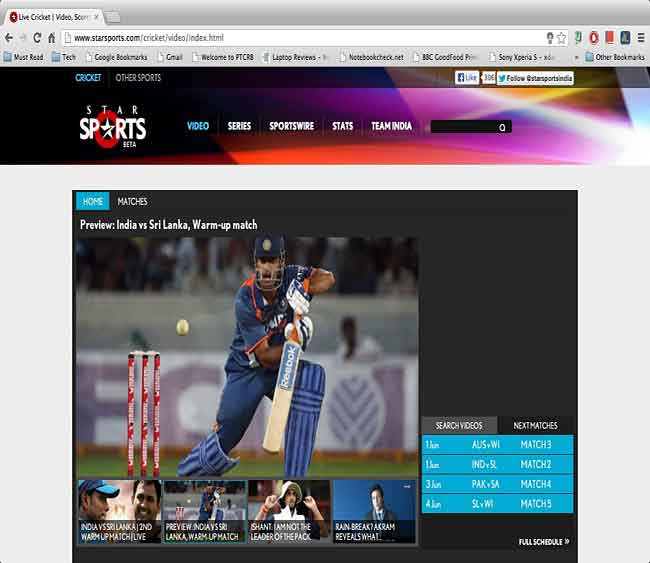 Head to the VIDEO section to get to the real fun stuff. This is a well-stocked library of cricket videos, and critically, the Live cricket streaming can be found here, in case a match is on at that time.

And yes, while we talk about video streaming, it just isn’t the vanilla video watching experience. On the contrary, StarSports.com does provide a lot of content in the same frame as the video. The idea simply is to keep you on the same screen, and yet have all the information and the social network integration available on a tap. 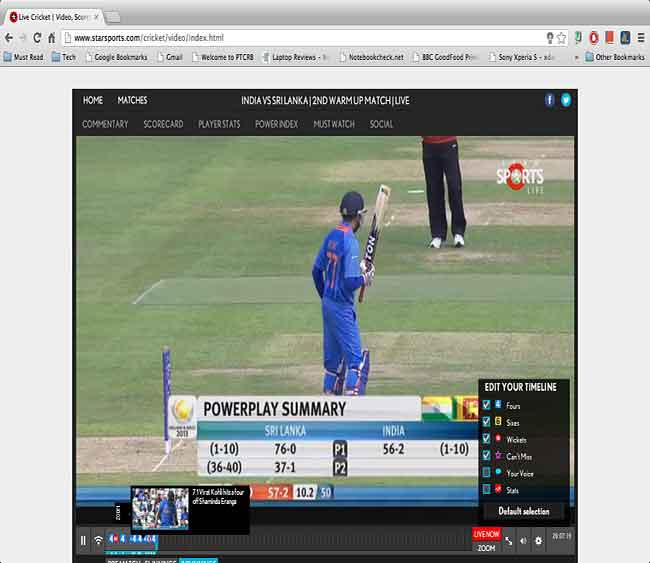 The timeline running at the bottom of the screen shows the important highlights – boundaries, wickets etc., and you can hover the mouse over that to see a slightly more detailed summary of what happened, with the video playing in the thumbnail! 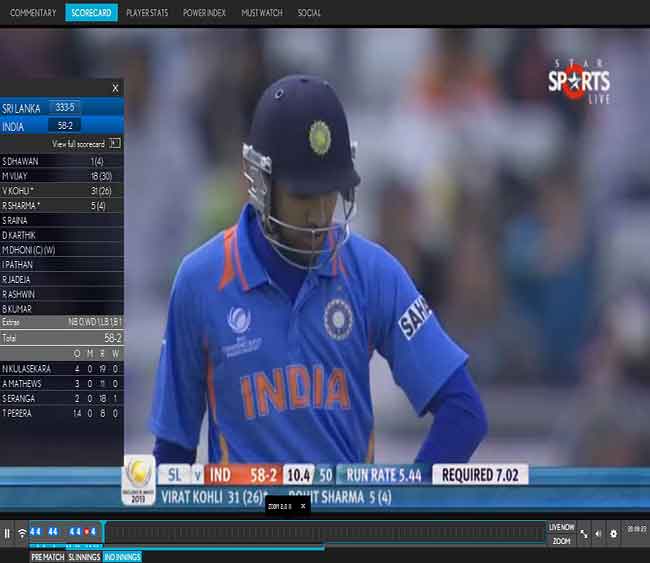 On the top are a list of options that you can select if you wish to see more stats and data regarding an individual player. One of them is the ummm, scoreboard! 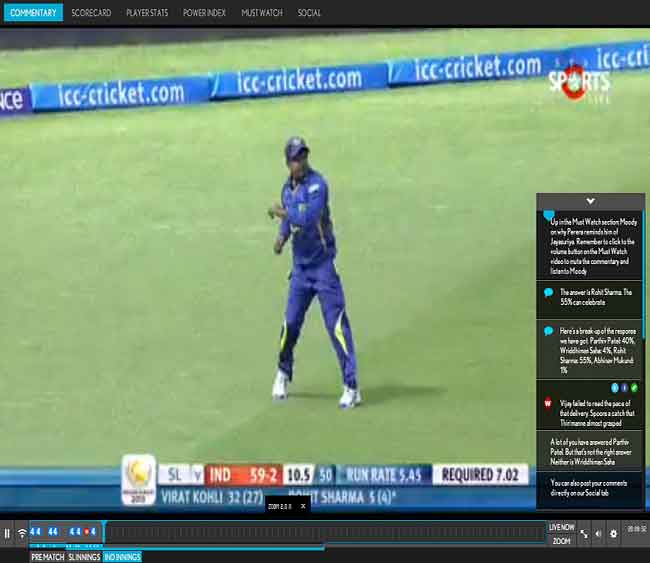 You can even switch on the text based commentary, which will show up on the bottom right of your screen. You can share some of these updates on FB and Twitter, directly. 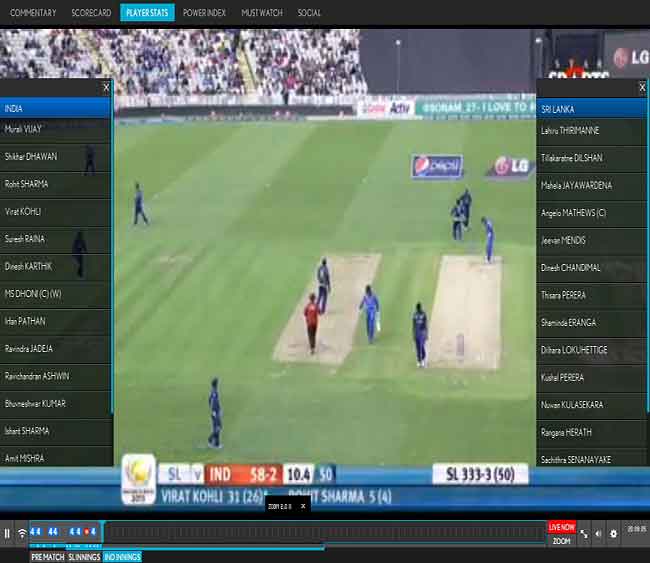 When you select Player Stats, you get the complete team sheets on either end of the screen. Select a player from here to see how well he is doing in this match.

Streaming: How good is it?
To fully compare the experience, we tested the Live streaming service on the home Wi-Fi connection, as well as on a 3G network. 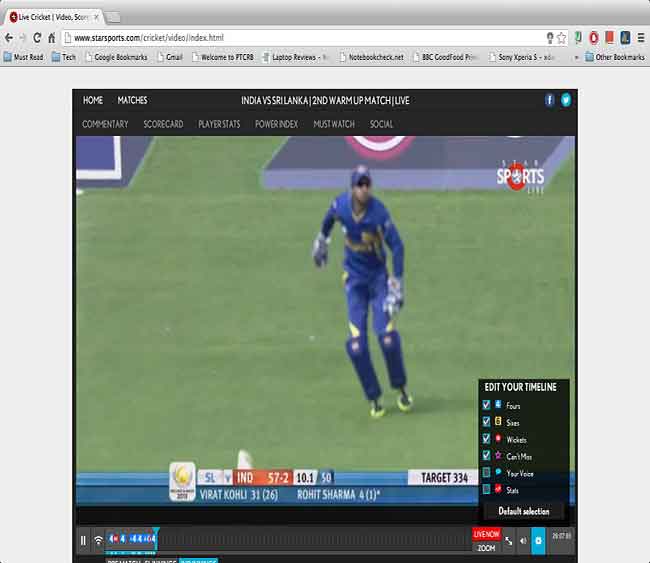 Live match streaming begins almost instantly, and is largely stutter free. The streaming quality/bitrate is automatically changed in case the data speeds are fluctuating on your connection.

On the home Wi-Fi connection, the streaming quality was very good for the most part. Tap on start streaming, and it took 3-4 seconds for the video to kick in. The picture quality is very good, good enough to hook up the laptop to the 42-inch LED TV via HDMI and enjoy the match. The streaming service automatically detects any change in available bandwidth on your connection, and immediately changes the streaming quality accordingly. However, we noticed a few times when we either started downloading something or browsing slightly heavy web pages on another machine hooked up to the same Wi-Fi.

Interesting to note that the moment you access any of the extra features during streaming – commentary, scorecard etc., the quality of the video does reduce for a while. You can see the two screen-grabs to illustrate the difference, visible when you particularly look at the text on the scoreboard at the bottom of the screen, and compare the clarity of the text.

In the first image, the scores are very crisp and easy to read. In the subsequent two shots, the same text isn’t as clear, and safe to say that it is fuzzy.

If you happen to use this service on a smartphone or a tablet, it is a bit of a mixed bag. On the iPhone, the streaming service didn’t work. It clearly says that this service is currently unavailable on iOS devices. However, it is now working on the iPad, as the screenshots below would show you. Maybe the service will be available on the iPhone as well, soon. 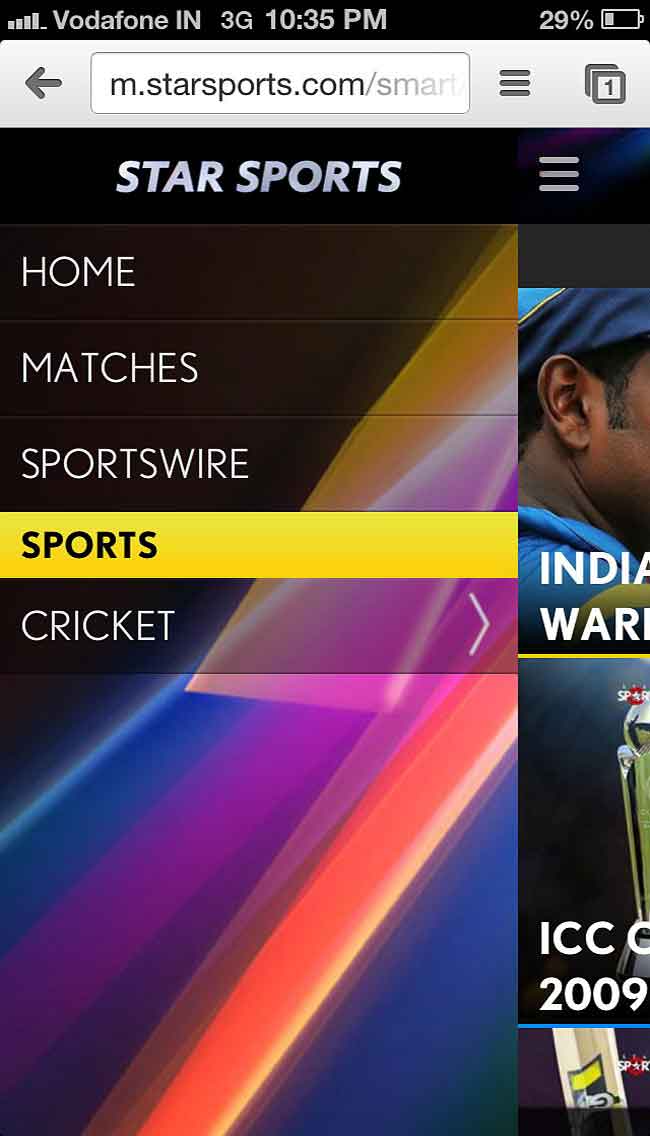 When you access StarSports.com on your mobile device, you will get access to the mobile optimized version of the website, but with all features active as is. Very neat.

The mobile interface on the iOS devices is very neat, functional and easy to navigate. The big font sizes make readability easy.

If you are, however, using a smartphone operating system that is not iOS, the streaming service works on most smartphones and tablets. We tested this on a BlackBerry Z10, and the streaming worked seamlessly. The quality of streaming was much low in quality, which while it is a good option, is a tad surprising because the quality doesn’t change in case you are using Wi-Fi for streaming. We hope the option to toggle quality is added to the mobile version in the future. 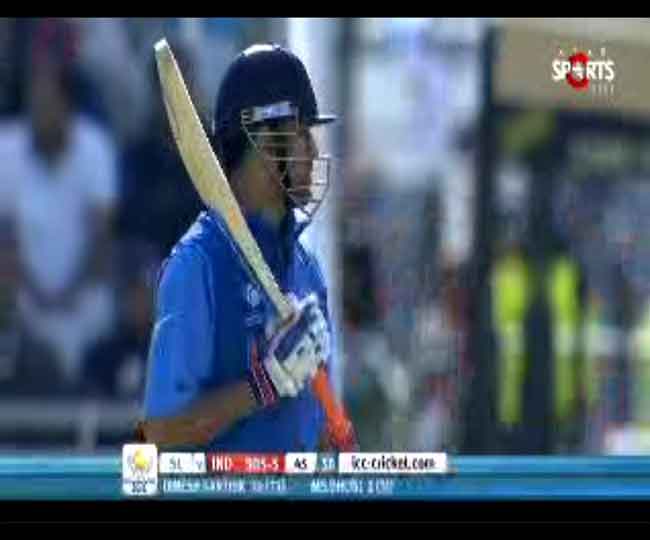 Voila! If you happen to have a BlackBerry 10 device (the Z10, primarily, at the moment), you will enjoy Live streaming, but at a rather chopped down bitrate and quality. However, something is better than nothing. 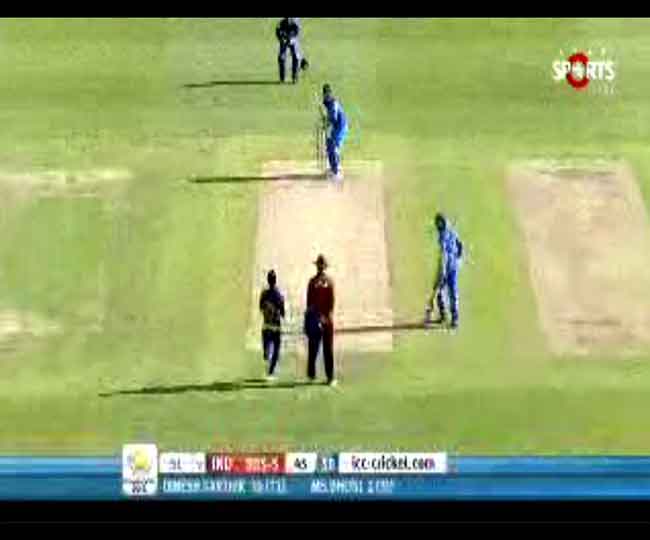 We switched between the home Wi-Fi and the Vodafone 3G network to see if the quality changes, but on both, the streaming remained as is. The service is restricting quality to mobile devices, probably to save on data transfer in case you are on 3G. 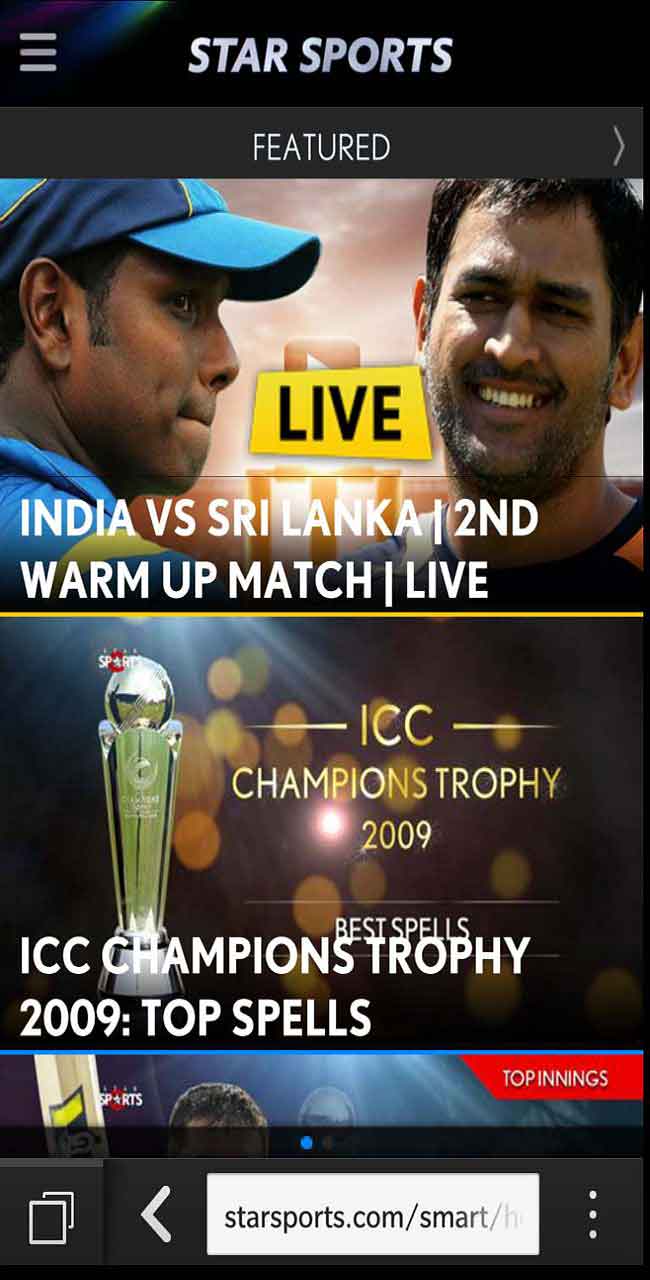 The mobile browser optimized version of StarSports.com looks the same across all phones, as you can see here. This is how the website looks on a BB10 device, and is almost the same as the one seen on one of the screen grabs from the iPhone (pictured above).

Bottom Line
Going by the excellent streaming experience that StarSports.com offers, we could do well to not argue with the wife, the cable/DTH operator or the electricity company, anymore. As long as you have a broadband connection available (get a UPS for the router, people!), StarSports.com will do more than enough to keep you close to the action. At the moment, the service is completely free. However, that may change in the future. Also, while the streaming is excellent on connections with good speed, it is a tad fussy if the speed fluctuates or drops. We would recommend you check this out during the upcoming ICC Champions Trophy. Could do well to add a quality toggle for streaming on smartphones, start streaming on iOS devices and ensure the service doesn’t drop quality too much in case the viewer is checking out the additional info in the video window. And we hope that more channels are added to the streaming bouquet soon, because it’ll be serious fun to catch the Barclays Premier League or F1 action when not around a TV.