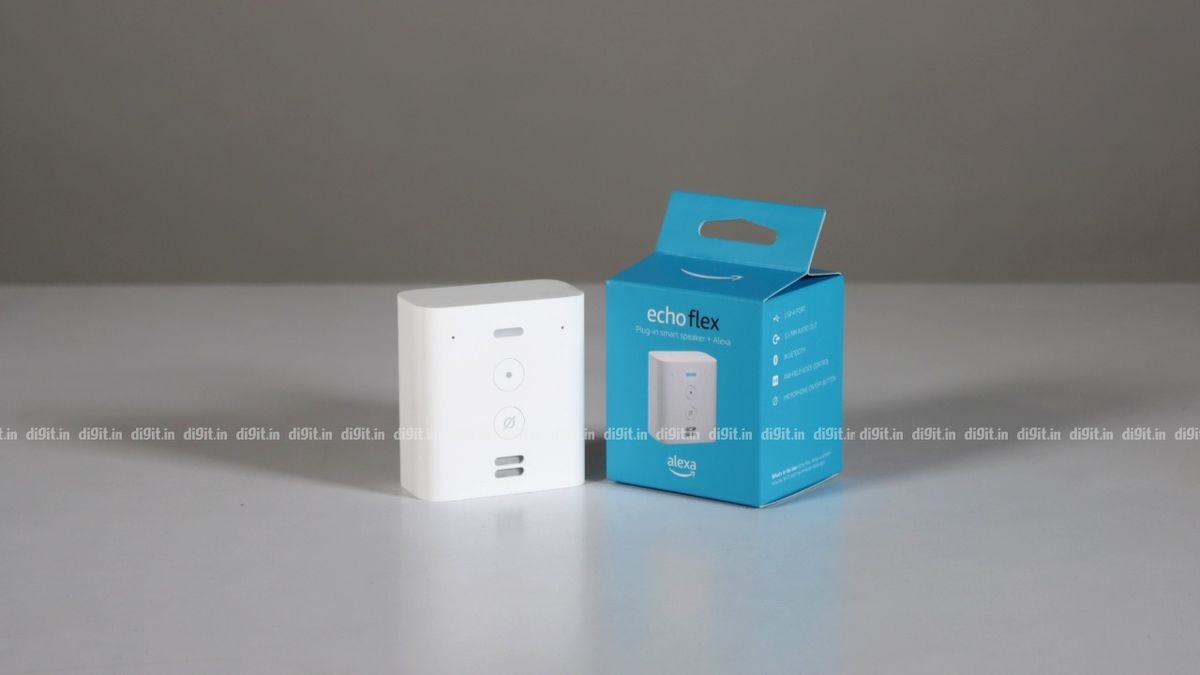 With Amazon launching a new Echo device almost every other month these days, it’s evident the popular American multinational wants to rule the roost in the Indian smart speaker and—more recently—small display markets. The company’s portfolio recently saw the addition of some very unique models, like the Echo Input Portable Edition (Amazon’s first battery-powered Echo device in India) and the Echo Auto (an Echo device designed to be operated in the car). The Echo Flex is also one such device.

Amazon’s aim is to make its popular digital assistant Alexa as easily accessible to the user as possible, even if that means cramming her into a tiny ring or a pair of glasses. This aim reflects unmistakably in the new Echo Flex. On the product page it’s billed as a plug-in Echo device that’s meant for smart home control. In fact, Amazon clarifies on its product page that the Echo Flex is not designed for music playback, only voice commands. What the company doesn’t mention is that it is also the cheapest Echo device you can get today in India. It costs Rs 2,999 on Amazon.in but it's selling for Rs 2,499 at the time of writing this review. With that, let’s check out the new Echo Flex.

As you can probably tell, the Amazon Echo Flex sports a unique form factor, which can’t quite be compared with that of its brethren. In fact, the portable little device can more easily be mistaken for a mosquito repellent machine or a Wi-Fi range extender. The Echo Flex is unmistakably wall-mountable, which is both good and bad. It’s good because it doesn’t clutter your home with one more power cable and adaptor. It’s bad because it forces you to use it directly from an easy-to-reach wall socket; a power strip that’s tucked away, say, under your bed or table won’t do much good. 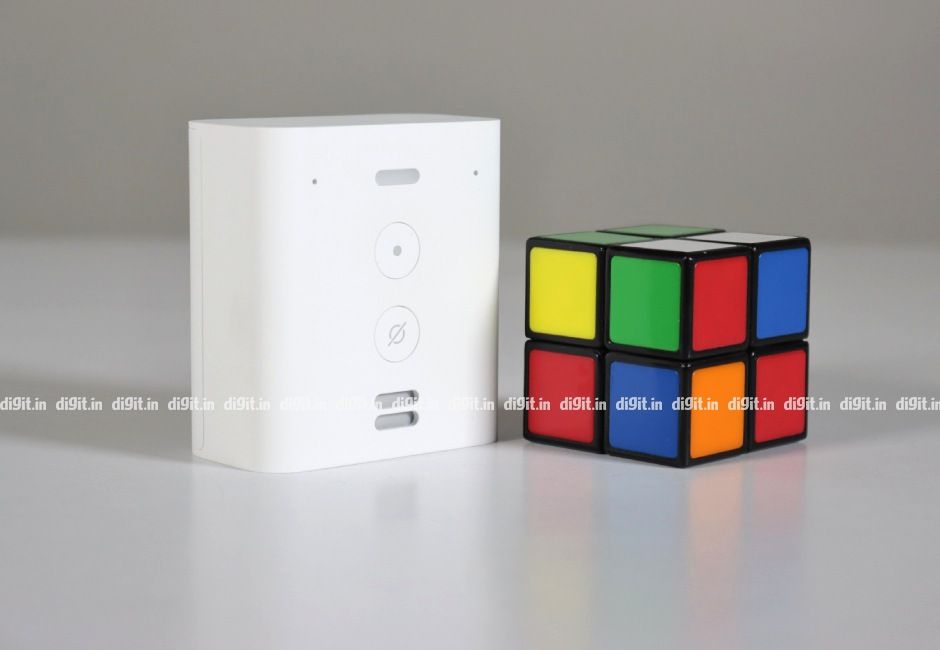 When placed conveniently in the kitchen or bedroom, the Echo Flex can prove to be an attractive little piece of tech. In its compact rectangular white plastic shell, the device packs a tiny 0.6-inch speaker, a two-microphone array, the Action and Microphone Off buttons, a small LED light bar for status indications, a 3.5mm jack for audio output, and a USB-A port for charging other devices. While the short pill-shaped light bar doesn’t fail to show the device’s status, it’s not as effective or attractive as the multi-colour light ring on the mainstream Echo series. The Echo Flex also misses physical buttons for volume control, forcing you to use your voice every single time. 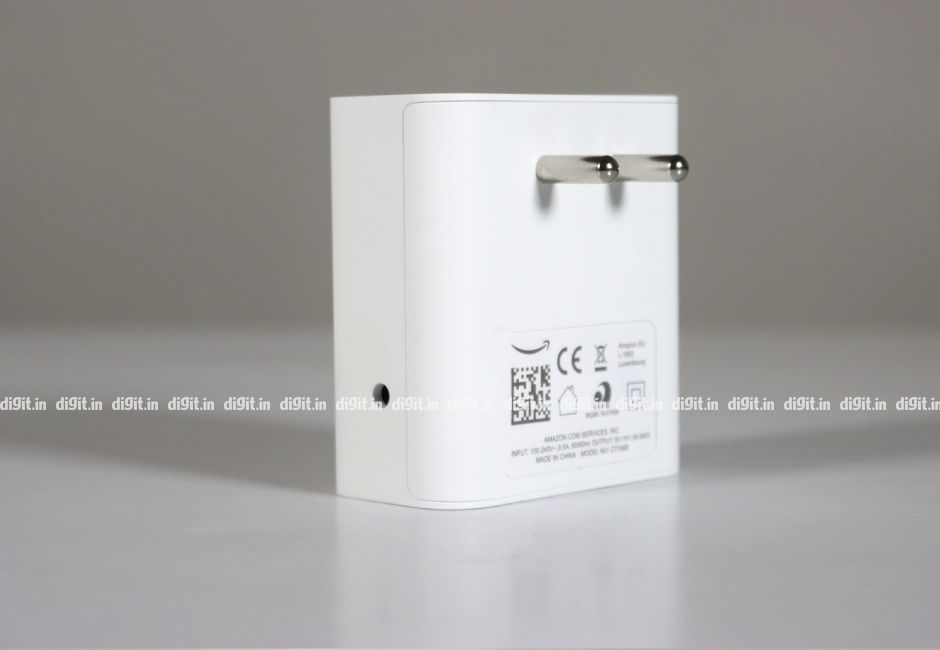 Setting the Amazon Echo Flex up is no easier or harder than setting up any other Echo device without a display. The setup process, which usually takes up to twenty minutes to complete, begins with the installation of the Amazon Alexa smartphone app. The app is available on both Android and iOS platforms for free, and it guides you through the setup process. For reasons unknown, the review unit talked me through the setup process in Indian English but automatically switched to British English afterwards. Along with it changed the location and timezone. This switch happened even though my default account language was set to Indian English and reflected in all other Echo devices. I guess I’ll chalk that up to a bug in the system. 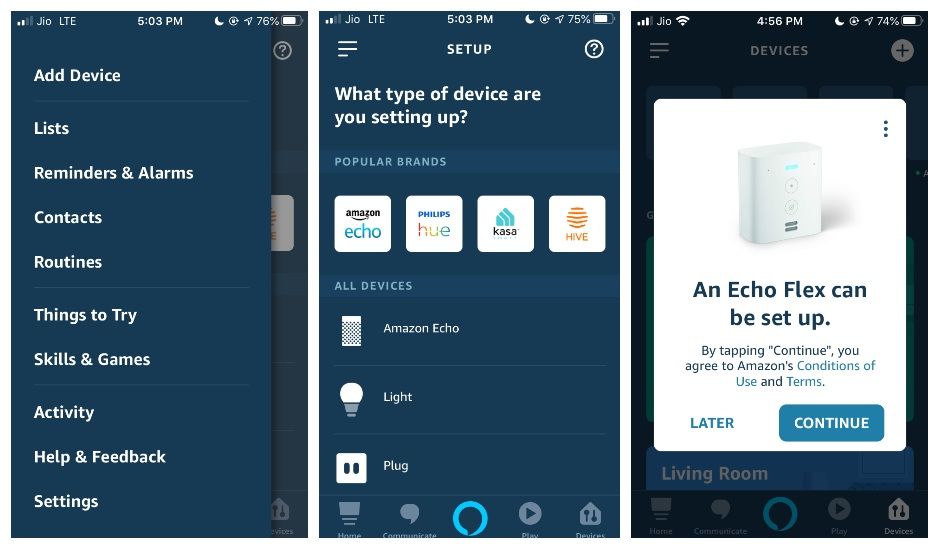 Like most other devices in the Echo family, the Echo Flex features a 3.5mm jack for audio output on the right side of its body. I’m happy to see the inclusion of this jack on a device as basic as the Echo Flex. By contrast, none of Google’s smart speakers or displays in India come with a 3.5mm jack for audio output. This feature will certainly liberate audio enthusiasts because they’ll be able to hook the Echo Flex up to their favourite set of speakers while retaining the power of Amazon Alexa. 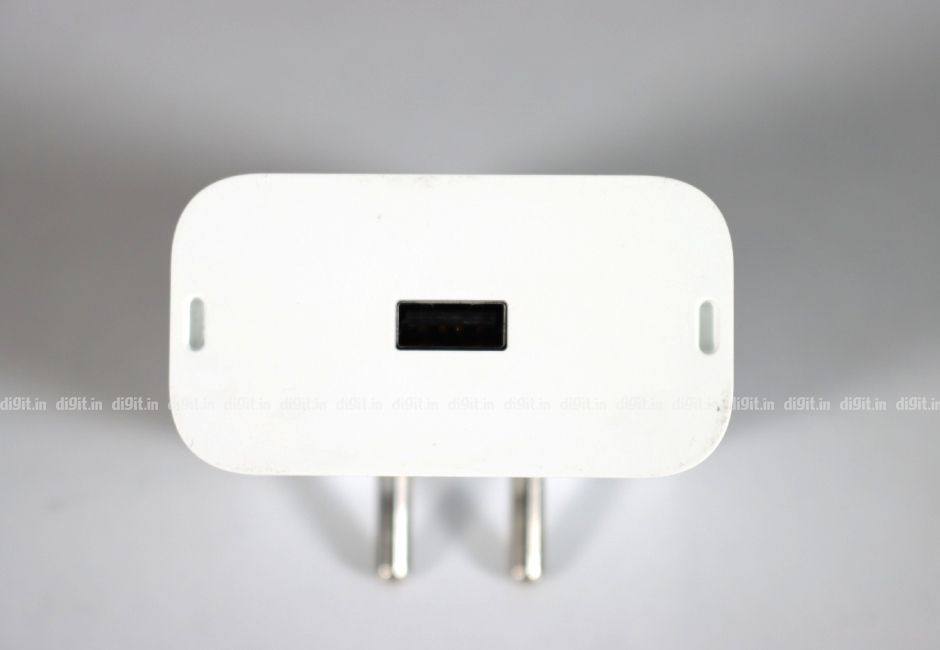 Surprisingly, the Echo Flex even packs a USB-A port on the bottom side of its body for charging low-power devices. Now, this is something we don’t see on other Echo devices—not even on the most expensive Echo Studio, in fact. The USB port on the Echo Flex can deliver up to 7.5 watts, which is comfortable for charging wireless headsets and fitness bands, but not for fast-charging your smartphone. Nonetheless, it’s a nifty feature that won’t go amiss on other Echo speakers as well. Our review unit managed to charge a pair of Mi Sports Bluetooth Earphones in about two hours.

Like every other Echo device in Amazon’s stable, the Echo Flex is powered by the Amazon Alexa voice-based digital assistant on the inside. Alexa lets you give her commands such as, ‘How’s the weather?’, ‘Tell me a story’, ‘Book a taxi on Uber’, ‘Play songs by The Beatles’, and ‘Turn off the bedroom light’. It’s important to note that some of these commands will only work when a certain ‘skill’ is enabled in the Amazon Alexa app. These skills basically enable Alexa to use your personal accounts for data access, such as Uber and Domino’s Pizza. When compared with Google Assistant, Amazon Alexa comes with a few unique features, such as whisper mode (for when you don’t want to wake your parents or spouse) and a custom wake word setting (for when you’re bored of calling her Alexa). In my experience, Amazon Alexa is a friendlier digital assistant than Google Assistant.

The Echo Flex comes with a single tiny 0.6-inch mini-speaker that’s best reserved for alarms, reminders, and voice responses from Alexa. Its output is at best flat and weak for all genres of music. By contrast, the Echo Dot has a larger 1.6-inch speaker driver, which is decent for casual music listening. In fact, Amazon writes candidly on the product page of its wall-mountable speaker, “Echo Flex has a mini built-in speaker that is not optimized for music playback.” Luckily, there’s a 3.5mm jack jack for output to external speakers. You should definitely connect the Echo Flex to a pair of good speakers if you seek good audio quality. You can read our review of the Echo Dot with Clock here. 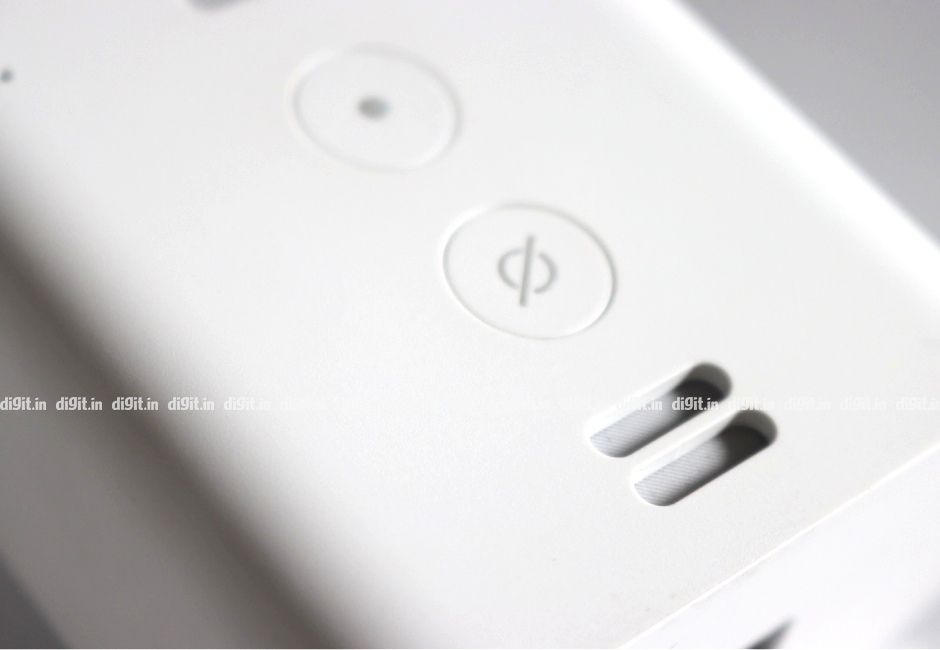 The Echo Flex uses a two-microphone array to pick up ‘Alexa’ calls from its users. The third-generation Echo, by contrast, employs a seven-microphone array for improved reach and sensitivity. The microphone setup on the Echo Flex isn’t bad, but it isn’t great either. The review unit responded to ‘Alexa’ calls as expected when I sat about two metres away from the device and spoke with moderate softness. But the device failed to pick up my calls when I moved even a little farther away from where I was before. In other words, the Echo Flex should be able to hear you if it's kept fairly close to you in the bedroom or kitchen. But if it's plugged into a socket that's across the room, you'll have to draw a breath and shout out to Alexa.

As I mentioned in the Design and Build section of the review, the fact that the Amazon Echo Flex is a cable-free wall-mountable smart speaker is both an advantage and disadvantage. Which one of them it is to you depends on how you plan to use the Echo Flex. For it to make sense, the device must be plugged into a wall socket in an area of your home or office where you spend a lot of time. It must also be within close reach. Otherwise, you might catch yourself calling Alexa over and over again in an increasingly louder tone. In other words, the Echo Flex is strictly a near-field device. 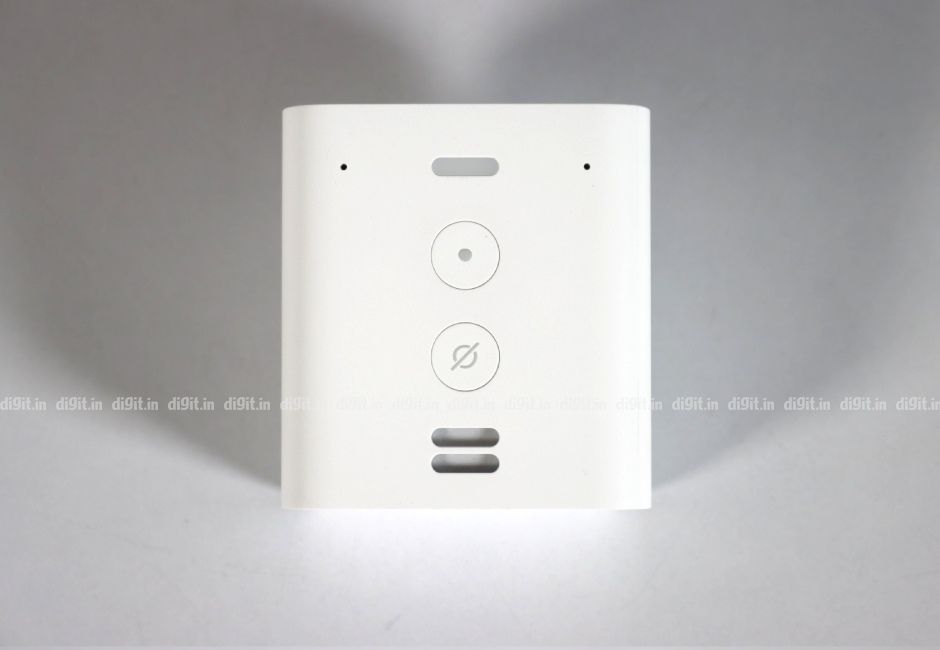 Even when it’s conveniently placed, the Amazon Echo Flex is not without its limitations. It’s got a weak speaker that’s only good for voice responses, making it disappointing for music playback—unless you’ve got a set of better external speakers to connect it to. It wins a few brownie points by offering a USB-A port for charging other devices. In summary, the Echo Flex is for you if you’re aware of its physical limitations and want a cheap Echo device for bedside companionship anyway. Its biggest selling point is its friendly price of Rs 2,999.