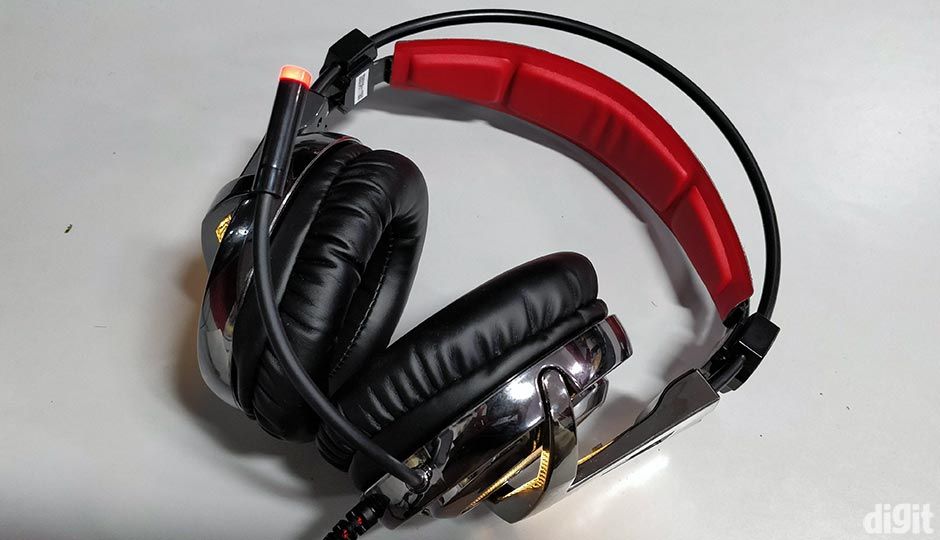 Zebronics is trying to fit in their Orion gaming headset somewhere around the lower and mid-range. Comfort is clearly the top priority here considering the suspended headband design, usually seen on higher-end headphones which are now making their way to the lower segment. The outer frame is made of metal using two pipes with the headband between them. The headband has some cushioning under it which could have been better. It’s flexible enough to accommodate big head sizes. The earcups are made of plastic with a glossy and metallic finish. Overall, the headset has a mediocre build quality and the cushioning will ensure you can wear the Orion for long gaming sessions.

Audio performance is average on the headset. The soundstage is narrow and the sound signature is close to neutral but not as good as the HyperX Revolver S. We weren’t really impressed with the bass response as it lacks the punchy and heavy feel. This makes the sounds of explosions, gunshots and vehicles a little underwhelming in games. There’s one area where the Orion shines and that’s mi-
crophone performance. Vocals sound natural without any audible enhancements. Zebronics could have made it much better by including some noise cancellation and a pop filter.

Considering all the shortcomings and interesting aspects, at this price we would recommend the ASUS Cerberus V2 over the Orion. Not only do you get a similar performing microphone but better audio reproduction in the drivers and modularity.

Gaming headsets are made to fulfil one specific use-case and that is operating as a fully functioning communication device while gaming. All you need is an acceptable bass response to make in-game sounds immersive while delivering clear vocals using the microphone. On the lower price spectrum of gaming headsets, the audio performance is generally the same in the entry-level to mid-range. It’s at the high-end side where you can actually feel the difference in audio reproduction and get handy little features. When we first used the Zebronics Orion, we felt this is just another headset trying to be fancy. However, the microphone performance was surprisingly amazing, something we hardly get to see in this range. We’ll be taking a closer look at how does the Orion fare in other the aspects of audio performance. 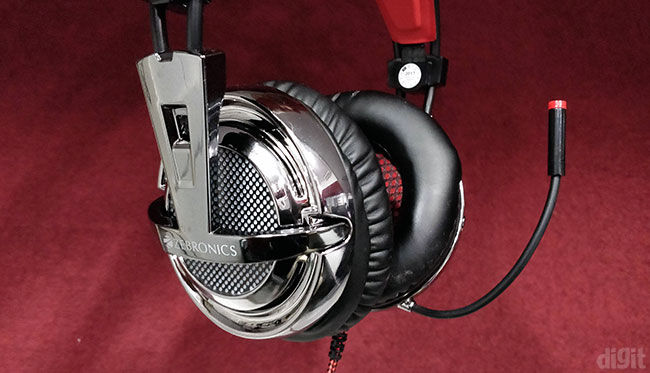 Most gaming headsets in the budget category tend to incorporate the slider mechanism for the headrest. Even though they can be implemented well, they aren’t really a universal solution for different head sizes. A better way is the suspended headband design where the headband adjusts according to the size of your head. The elastic headband can be stretched in the metal frame of the headset. It’s more comfortable to wear for long hours. A similar design is followed on the Orion with a two metal pipes in the frame and an elastic headband with some foam installed. Even though the foam isn’t of good quality, they are comfortable. The headset is flexible enough to withstand rough usage while wearing. It has a braided cable ending to the USB connector. So, you can’t use the headset with your smartphone or consoles. 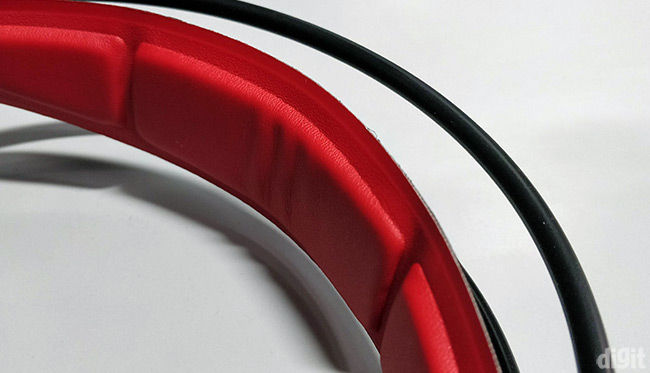 The earcups have a glossy and metallic finish over them. It’s made of plastic and there’s LED lighting at the centre. Most of the earcup is illuminated by the LED lights that can change through seven colours. Even though they state that this is RGB lighting, you can only enjoy seven colours out of the million combinations possible in true RGB lighting. Over the LEDs, there’s a grilled layer attached just for aesthetics. Since the headset follows the suspended design, the earcups don’t swivel on its axis. You can place it around your neck but it won’t be comfortable. 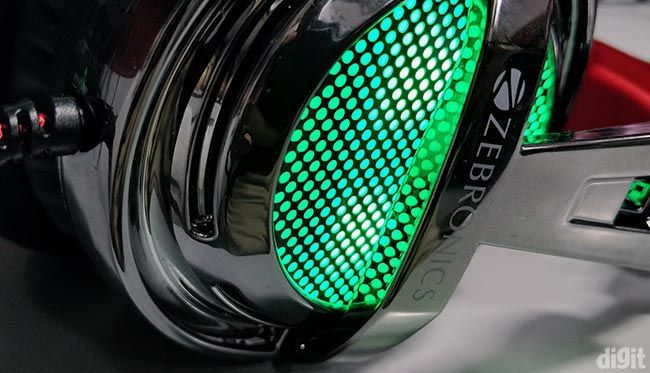 Cushioning is favourable on the earcups. We had them on for hours and didn’t have any problem. Removing the cushions is easy but attaching them back is a little difficult. Over the drivers, a sponge filter has been glued down. Sometimes, you could achieve a different sound signature by removing or replacing these filters. However, you will have to rip out the existing one if you want to add a different filter or remove it. 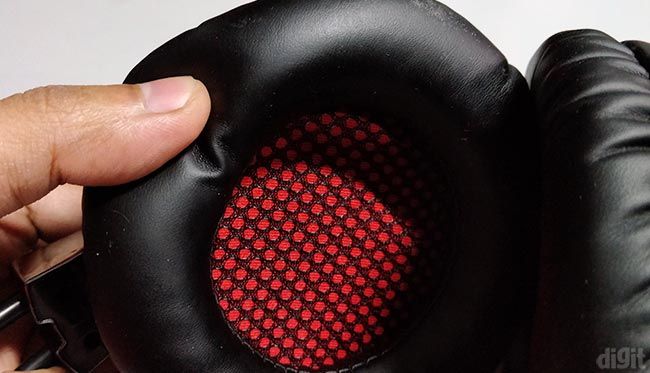 The microphone design is something we don’t expect to see in gaming headsets at this age. Having the option to remove or retract the mic makes it convenient when you don’t want to use the mic since you aren’t only going to play games with your headset. It’s a good thing that the stem of the mic is flexible enough to not return to its original position after some time. 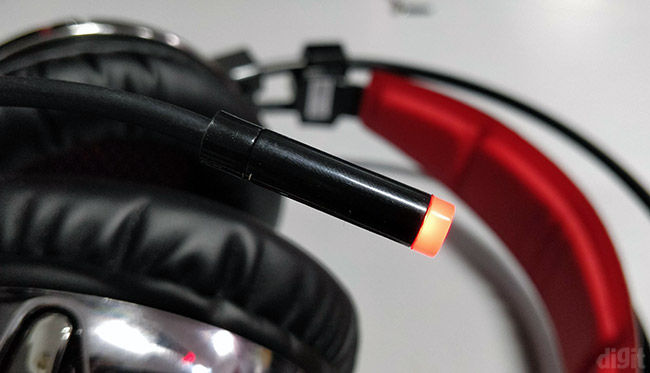 Having hardware buttons for volume control is always a must in a gaming headset. Yes, you might have volume control in your keyboard but as a standalone product, a gaming headset should be a complete audio system in itself. The Orion has a control pod that allows you to increase or decrease and mute the volume, and you also get additional buttons for muting the mic and lighting control. The LED button lets you change the colour of the LED on the earcups where one of the modes include a colour wave lighting effect. 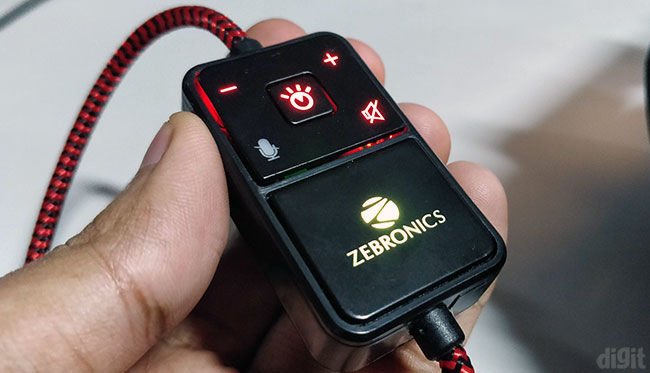 Performance on the drivers is tested with a few sound samples and some music playback. Our objective is always to find out whether the headset performs well on an overall basis rather than just in video games. The reference gaming headset we use for our testing is the HyperX Revolver S because of its close to neutral sound signature. On the Zebronics Orion, we found the signature to be around the neutral signature too. However, the drivers don’t have a wide soundstage. This is why the instruments and vocals sound squashed together and their sound isn’t clearly audible. Essentially, you’d have a hard time trying to distinguish between the different sounds in the music. 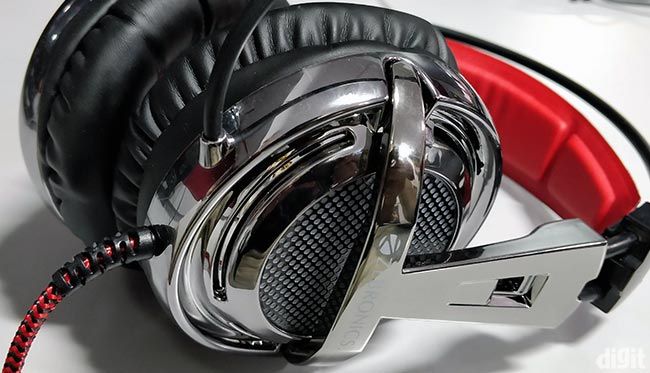 After music, we got down to its primary use-case which is gaming. The bass isn’t punchy enough so we did find it lacking during FPS games. Sounds of gunshots and explosions didn’t offer the immersive experience we expect. However, these sounds are nowhere close to flat and you will be able to notice the difference in-game. Although the soundstage is narrow, you won’t be at a disadvantage. Open world games will still feel immersive with audio coming in from all the directions. This also means that positional audio is satisfactory on the headset. We were able to distinguish the direction of vehicles and gunshots by their sounds. Coming to 7.1 virtual surround sound, we haven’t come across any headset that can achieve a favourable experience with just two drivers. It was the same on the Orion and we would suggest you skip this. Enabling the mode only made the audio louder when the virtual speakers were moved closer to the subject and did nothing to improve immersion.

While listening to songs and playing games with the headset, there wasn’t any extraordinary feature that stood out. That was until we started using voice chat and players on the other side started noticing good quality vocals from our end. At this price, the Orion offers a brilliant microphone that performs better on some aspects that even a few premium headsets out there can’t offer. The mic is able to reproduce almost a flat voice signature that sounds natural without any enhancement. We think there’s no noise cancellation implemented since all the background noise was picked up. So, if there are people speaking or there’s music playing around you, all of it will be picked up by the mic. Your voice tends to pop if the mic is kept close to your mouth but if you put it away from the volume also goes down. We installed a pop filter from a different mic and the problem was solved. Only if the mic had a pop filter over it and some noise cancellation incorporated, it would have scored a perfect score in microphone performance. 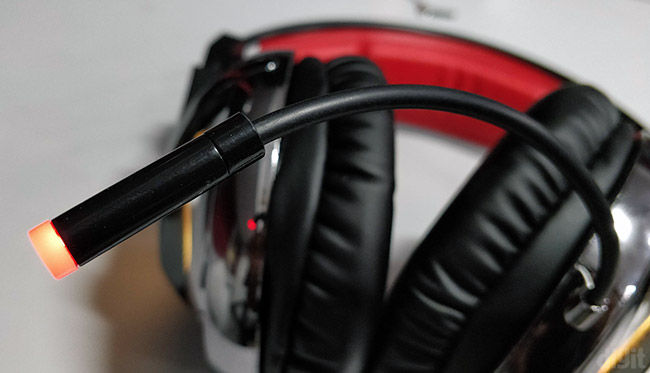 Headphones that don’t pack many features don’t really require software support. They usually tend to offer the same level of control that can be achieved with the default Sound app under Windows. Additionally, you get to enable and play around with the equaliser to tune it to your listening preferences. With 7.1 surround sound, manufacturers will either give you a button to enable or disable it. Some will go the extra mile to provide you with a software to tinker around with the distance between you and the virtual speakers. The Orion’s software is pretty basic and it includes several tabs for menus that can be accessed with a right-click. Apart from the general options to change the sample rate, equaliser and environmental effects, you’ll find some additional options to tweak including 7.1 surround sound. Once enabled, you can edit the location of the virtual speakers around to attain your preferred sound. Although there are seven virtual speakers or drivers present (excluding the woofer), changing the location of only the “L” and “R” drivers actually made difference. Moving around the others didn’t affect the sound at all or was hardly noticeable. Hence, if you want to play around with the virtual soundstage, you should move only the left and right drivers to whatever suits you best.

The software also packs in a few more effects for fun. Under Xear SingFX, you can change the pitch of the audio and also eliminate the vocals from a song while affecting the music too. Xear Surround Max boosts the audio and it can only be enabled along with 7.1 surround. Similar effects are available for the microphone. Here, the Xear SingFX allows control over echo and four presets of voice emulation called Magic Voice. Everything is easy to use in the software but the design is too old school.