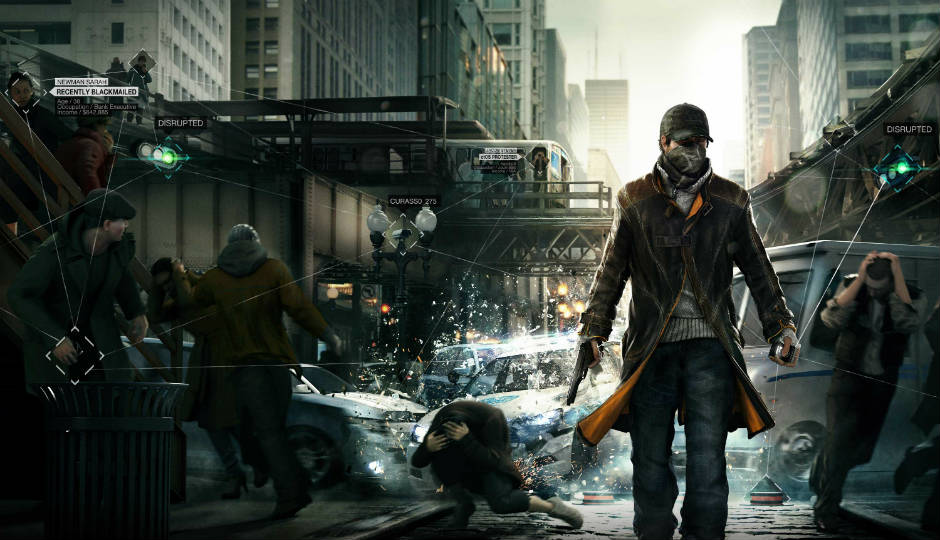 Overall, Watch Dogs is a game that disappoints. It's a strange sort of disappointment, one not meant for something that was bound to fail, but rather one reserved for something that failed to acheive its potential. I went into Watch Dogs expecting a confident, innovative game that would emulate the term "next-gen" in every possible way, but what I got instead were the movies Swordfish and Taken glued together, which is really not as awesome as it may sound.

If your taste in games is anything like mine, you will really hate Watch Dogs for the first two or three hours. The main reason for this is the absolute sensory overload that the game delivers from the very first minute, something that I only got used to after about three hours in the game. In that way, Watch Dogs is like the polar opposite of Assassin's Creed III, a game that was criticised for forcing the player to go through what was essentially a three hour tutorial session. In both its gameplay and design, Watch Dogs is more like the Grand Theft Auto games, in that it throws players into a vast world with very little introduction. Another thing that you'll have to get used to is sheer amount of information on screen at any given moment. But more on that later, first let's get to the story.

In Watch Dogs, you play criminal and vigilante extraordinaire, Aiden Pearce, a computer hacker who is also strangely adept at kicking ass, shooting guns and being generally grumpy in the grand tradition of white male protagonists. After a hacking operation gone wrong, Pearce is hunted by killers who murder his niece and leave him more pissed off than usual. And that's where the game begins. In the mould of Splinter Cell: Conviction another game starring an angry white guy on a revenge trip, Watch Dogs starts off with you torturing/beating up a suspect. However soon after, you are thrown into the bustling real world city of Chicago as you begin your search for the people that you hold responsible for your misery. 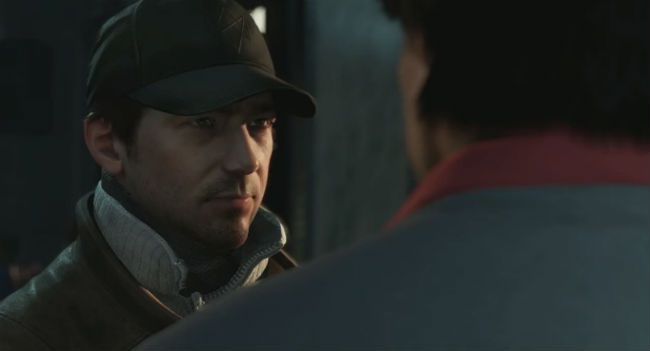 The best thing about Watch Dogs' story is that at least it tries to explain the motivations behind Aiden Pearce's decision to go Batman on Chicago. However, apart from the 'colourful' cast of supporting characters that have now become standard in Ubisoft games, there's really nothing great about the story here. For all intents and purposes, the game may as well have replaced Pearce's dead niece with a stolen car or money, because halfway through the game it seems like neither you nor Pearce even remember why the hell you're doing whatever you're doing. If you were looking for a GTA Vice City style story that doesn't take itself seriously, you're out of luck. More often than not, Watch Dogs (like the aforementioned Conviction), feels like its telling a stodgy, dull and ugly story.

When Watch Dogs was first shown off at E3 2012, it kinda blew everyone's mind. Hacking appeared to be a core gameplay element that was not only innovative but looked like it would let gamers use other methods than combat to achieve objectives. Unfortunately, while hacking is pretty cool, it's not really all that it was cracked up to be. Hacking primarily lets you do three things- profile passers by and steal from their bank accounts, peek at their messages or calls or see if they're likely to be the victim of a crime or the perpetrator of one; hack into cameras and security locks; and control city infrastructure while driving to help you defeat enemies or get away from cops.

Profiling is the feature that was the focus of most of the pre-launch hype that surrounded Watch Dogs and it's also the most disappointing. While it's neat for the first hour or so to see the profiles of bystanders pop up with intimate details, there's really no point to it. In fact, unless you're facing a cash shortage in-game, you'll probably end up switching off the 'Profiling' feature unless the game absolutely requires you to turn it on. Hacking into cameras is much, much cooler since you can chain hacks by pointing a camera at another one to see (or hack into) something that's far away from you. This also comes into play very effectively when you have a room full of bad guys and you can thin the crowd from a safe distance by simply hacking into cameras and then using them to set off explosives, electrical boards, steam pipes etc. 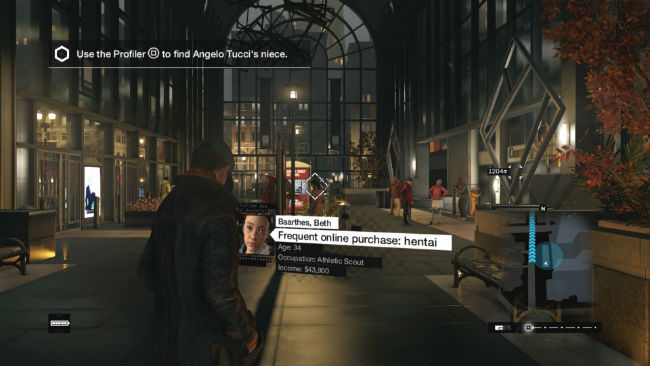 Profiling NPCs can be a little too interesting at times but is mostly a pointless feature.

Hacking while driving is an essential component but it could also have been more effective and fun. You can change traffic lights, bring up barriers and bridges on the fly but most of it barely does a thing to affect your pursuers. In fact, driving is probably the most frustrating aspect of the game because of how difficult it feels. While I respect Ubisoft's decision to make the vehicle handling slightly more realistic, in that, you can't speed everywhere at 150 kmph and expect not to get into accidents, the perfect driving skills and 'rubber-banding' that the cops chasing you exhibit, make every pursuit a painful experience. 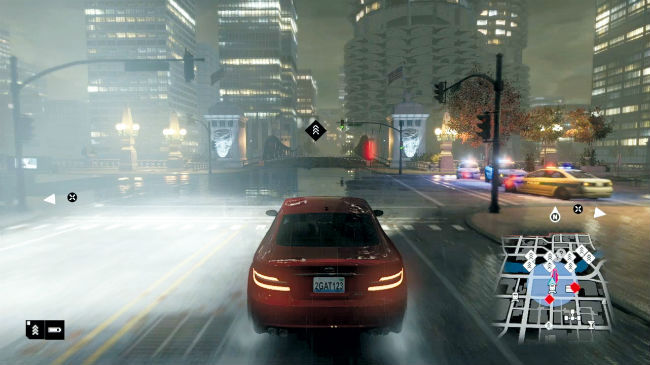 Driving in Watch Dogs is a frustrating, unnecessarily difficult experience.

Apart from hacking and driving, Watch Dogs also has you taking down groups of enemies and it opens up both stealth and full-on combat as valid tactics. However, I did find that stealth seemed to be the best approach, at least when used initially to take down some of the enemies. Pearce tends to be a little weak in combat and needs to stick to cover and the enemy A.I. is at times quite good and employs tactics like seeking cover and flanking. Overall, the combat in Watch Dogs is passable, especially if you plan on predominantly relying on a run and gun approach. 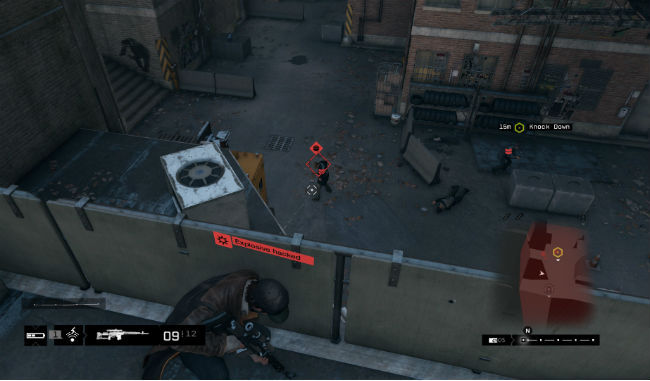 Stealth is a valid combat tactic & is fun when combined with hacking. 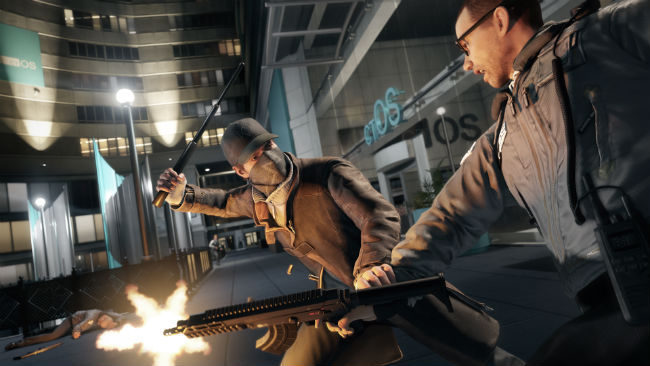 ...Or you could just get in your enemy's face with your baton.

Watch Dogs employs an "always-on" multiplayer component that lets other people hack into your game and try to hack you for points. Doing so will immediately alert you and then you'll need to search for the hacker within a designated area and take them down before the hack is complete. I'll have to admit that it felt pretty cool the first couple of times this happened in-game, but later on I ended up ignoring all such intrusions to just get on with the single player game. Watch Dogs also has some standard multiplayer game modes such as a free-roam with seven other players and multiplayer car races.

For a "next-gen" game, Watch Dogs' graphics aren't all that great. Don't get me wrong, the game looks good and the character models are also well done but there's really nothing about the look of the game that will make your jaw drop in awe. In fact, I thought that the (similarly named and similarly designed) 2012 game Sleeping Dogs looked better. On the other hand, Watch Dogs' Chicago is packed with NPCs with impressive voice acting. Overall, Watch Dogs' sound design is very well done and on a good pair of headphones, virtual Chicago does sound like a city teeming with life. 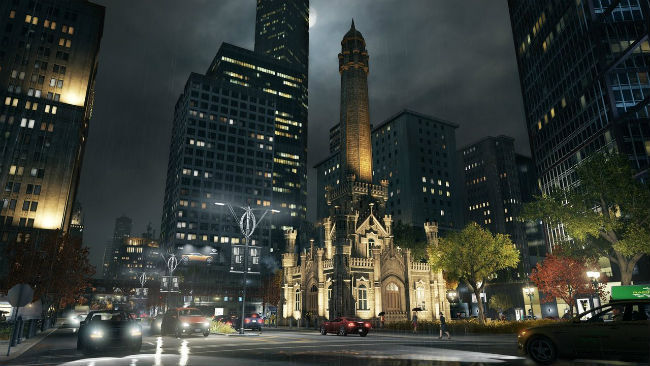 I played Watch Dogs on a mid-range PC with an Intel Core i5-4430 CPU, 8GB of RAM and a GTX 660 at a resolution of 1920x1080 pixels. There were definite performance issues, like stuttering and low frame-rates, especially while driving and I was forced to push most settings to medium or low and AA to FXAA. This is, frankly, disappointing considering that my rig almost meets the recommended system specs. I also faced some issues with connectivity on Uplay in the beginning but later on those issues disappeared. The game plays relatively well on a keyboard+mouse setup except for the driving bit in which using a keyboard makes it easy to over-accelerate the vehicle and lose control.

If you've reached this point in my review, it should be pretty evident that I was disappointed by Watch Dogs. It's a strange sort of disappointment, one not meant for something that was bound to fail, but rather one reserved for something that failed to achieve its potential. I went into Watch Dogs expecting a confident, innovative game that would emulate the term "next-gen" in every possible way, but what I got instead were the movies Swordfish and Taken glued together, which is really not as awesome as it may sound.

Thanks to NVIDIA for sharing the Watch Dogs Uplay code with us.