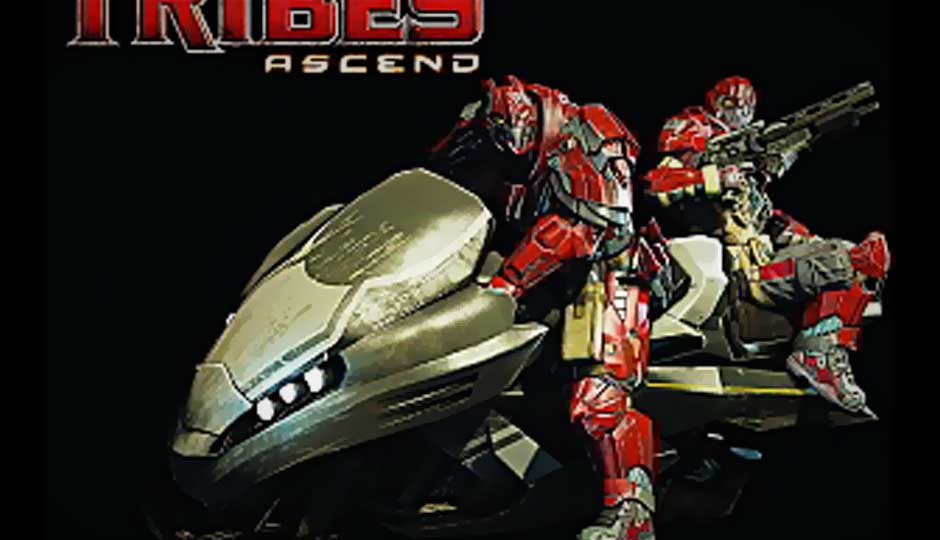 Tribes, one of the most frenetic shooters of 2001 returns in a new, "Free 2 Play" online avatar. To those new to the series, the gameplay is unlike anything you've ever experienced before. We won't spoil it by describing it to you, try out the game for yourself and make up your mind. It might seem tough at first, but if you persevere, you will be well rewarded. Don't forget to check out http://dgit.in/TribesA for registration and freebies and of course, a chance to frag the digit team!

The match is tied with only one flag cap to victory, your flag capper has just barely managed to bring the enemy flag back to your base and just as he is about to capture the enemy flag, a bolt from a Blood Eagle Pathfinder finds him and blows him to smithereens just as the enemy Pathfinder comes hurtling down from nowhere, recovers his own flag and grabs yours at over 200km/hr, all in one, smooth, expertly choreographed motion. In the space of a second, your hopes of victory have turned to dust.

You’re a Juggernaut who has just finished clearing out the generator room of pesky Raiders and you stare at the receding figure of the enemy Pathfinder from the generator tower, your team-mates trying to chase down the enemy. You see the blue streaks of the spinfusors in the distance, the occasional explosion of an explosive bolt and as the enemy weaves left and right amidst the chaos, narrowly but inexorably drawing further and further away, you know it won’t be enough, you know that it has to be you.

You take a deep breath, indulge in mental mathematics that you never knew you were capable of, triangulate the position of the enemy, calculate his possible trajectory, point your gun at a 45 degree angle and pull the trigger. The muted “whump” of the launch shakes your screen; the world seems to move in slow motion as you watch the mortar shell arc its way through the sky, trailing a jet of green plasma behind it. The enemy disappears behind a hillock half a kilometer away and you desperately keep your fingers crossed as the mortar follows suit, a heart-stopping moment later, WHAMMO! A massive green explosion and debris from the enemy’s body gently descends to the ground as your teammates glide up to your flag and return it to its stand. You can’t help but let rip a shout of pure exultation and relief amid the “Woohoos” of your teammates. Being the true soldier that you are, you collect your wits, pat down your ruffled hair and smugly enter a “pwned!” in the chat box. 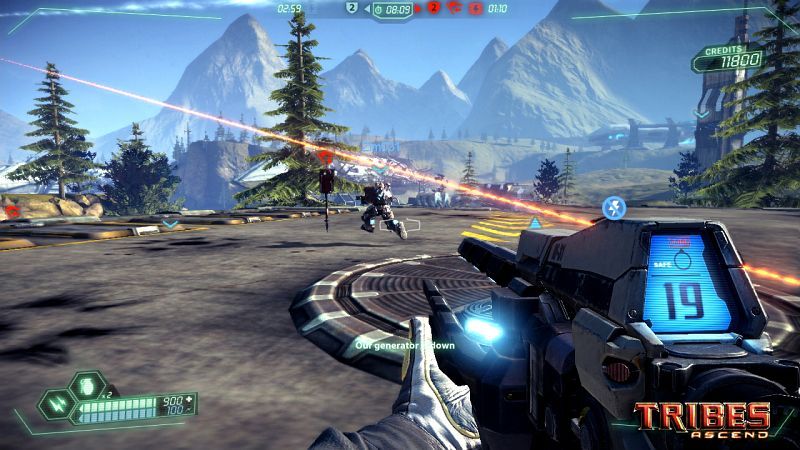 All is well?
It is moments like these that make this free-to-play game what it is. It gives you a sense of achievement like few other titles ever have (Quake 3 comes to mind). Every kill, every flag capture feels good, you played the odds and came out victorious. Tribes: Ascend is not a game to be superficially glanced at and dismissed. It must be played, mastered; it is a game that demands that you sacrifice hours of your life, every single day, just to stay in shape. This isn’t even drudgery, every moment is fun and the better you get at the game, the more you realize how much there is to learn.

Now this game is not perfect, there are issues, minor bugs and other visual glitches, sometimes the map turns transparent or you’ll be kicked from a server due to some connection issue. None of these are major issues though and we’ve only mentioned them for the sake of pointing them out and these sorts of bugs are present in almost any game available today anyway. Shazbot!
Something that does detract from the Tribes: Ascend experience is balance issues. Up to level 10, you usually end up playing with n00bs at your level, but beyond that, level 10 onwards, you’ll be put up against players anywhere from level 10 to level 50 (the highest level you can reach at the time of writing). Considering the fact that such the leveling system is similar to an RPG, where it is exponentially more difficult to level up, players even 3 - 4 levels above you are usually far more skilled than you.

Another issue with Tribes: Ascend is that it is very rare that you get an actual feeling of team spirit. It is when you play as a well-coordinated team that the most fun can be had and when the game is most effective. When there are no tangible rewards for being a team-player, most matches boil down to individual achievements and “lone rangers” scattered all over the map, each doing their own thing. The newly introduced “blitz” mode does work to some extent in forcing a team spirit onto players. Blitz is the same as CTF but with an additional mechanism wherein the enemy flag (and yours) will relocate every time it is captured. This leads to situations where the flag is sometimes almost impossible to capture and where a coordinated team effort is essential to get the enemy flag. Battlefield 3 does have similar issues, but then the game has VoIP support and you do get points for assists in everything from flag capture to suppression support and even to revive team mates and repair vehicles.

Speaking of vehicles, you get to choose from 3 different types, a bike, a tank and an aircraft (called a shrike). These vehicles are fun but it is sad how little impact they can have on a game. Most of the time these vehicles are more like minor irritants than actual entities of mayhem. When you see a tank, it is rarely fear that you feel, you want to be the first to destroy it and as such, you’ll see players swarming over such behemoths rather than scattering before them. 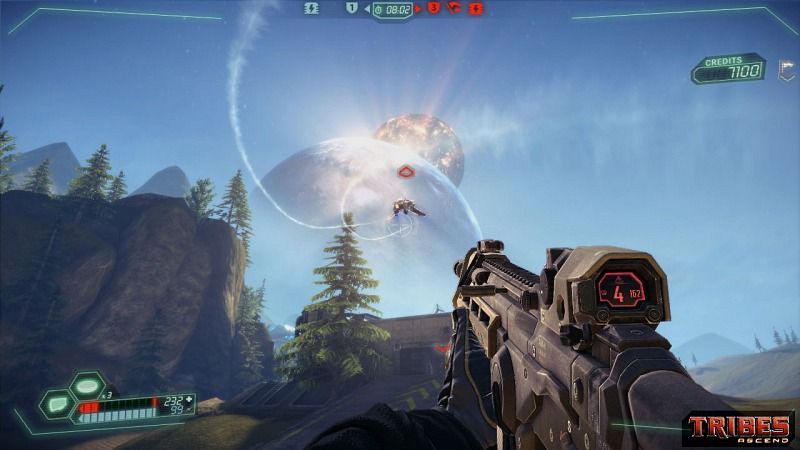 A cohesive team
When all the elements of Tribes: Ascend click is when you can have an insane amount of fun in the game. Simple things like having someone man the machine gun in a tank, a player capable enough to shoot down incoming missiles (yes, you can do that!) are what make this game great. Grabbing a flag while the enemy base is under heavy mortar fire from Juggernauts in the distance, passing and grabbing flags with the precision of pro-footballers, these make the game what it is. A good team can really decimate the enemy and we truly wish there was more of the team spirit in this game. Those moments when you get into the “flow” of the game, where you’re in a Zen state and all your shots are hitting their mark; you whoosh by an enemy coming from the opposite direction and with a single twitch of your muscles, a move made without any conscious thought, you fire and don’t even glance back, blowing him to bits or seriously denting his health, that is when you know you’re doing it right. 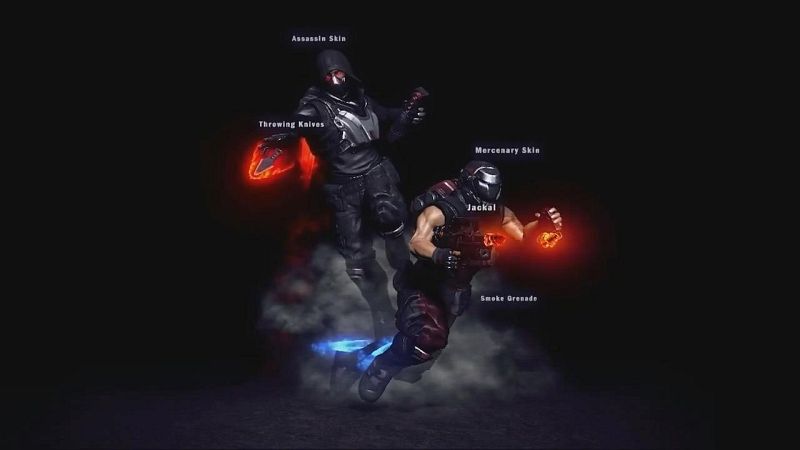 Multiplayer in India
There are no official dedicated servers in India at the moment, with the nearest servers being at Singapore. We had no issues playing the game on Singapore servers and managed a consistent ping of below 100ms, not great, but not bad either. The only problem with the Singapore servers is the lack of players towards the night. We found that the best experience we could have was when we played on the London servers, which are almost always full and you can be sure to have a good time. Keep your eye on the promo page though, we’re planning to launch our own custom servers soon.

Free 2 Play
This game follows the free 2 play model that is slowly gaining in popularity. Almost all items in the game can be bought with either gold (Tribes speak for actual cash) and the XP that you earn while playing the game. If you’re a player with some amount of skill, any item should not take you more than a few days to earn, not including the really expensive stuff of course. It is a bit frustrating that classes have to be unlocked with XP as you might not be very comfortable with the free classes that are initially unlocked. Players who pay will obviously have the advantage of gaining more time with those new weapons and so, will most probably be more proficient with them. Of course, you can bite the bullet and just spend some cash, 3,000 gold (about Rs. 1,500 - 2,000) ought to be enough to get you started, unlocking all classes and essential equipment for your choice of class. The folks at Hi-Rez studios did do a good job to ensure that the classes and weapons are well-balanced though, so even if you are facing off a big spender, you’re still likely to give that player a run for his/her money. 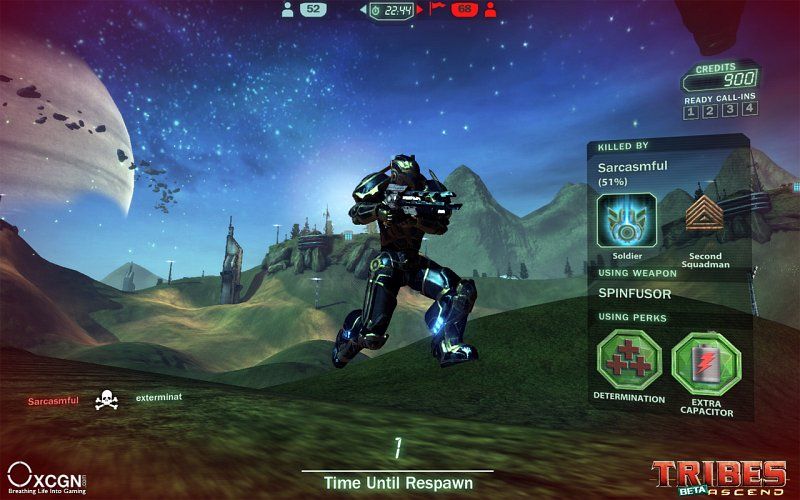 Weapons
The weapons vary from class to class, but are predominantly “spin-fusors”. You can think of them as rocket launchers, just with discs instead of rockets. There are many conventional weapons as well, such as shotguns, SMGs and mortars, but regardless of what weapon you have every single shot that you fire has to include some form of “prediction”. The weapons are almost all projectile based so you can’t just click and expect to hit the target, the bullets have hang-time and fixed velocities so killing an enemy from afar, even if you are a sniper, is not as easy as it is on games like call of duty or battlefield. In addition to this, you get access to perks and upgrades which you can mix and match to create the perfect combination to suit your play style; these can include extra energy, a higher regen rate, etc. Detailed information about classes, weapons and perks can be found at http://dgit.in/OI4rZY.

Verdict
To those new to the series, the gameplay is unlike anything you’ve ever experienced before. We won’t spoil it by describing it to you, try out the game for yourself and make up your mind. It might seem tough at first, but if you persevere, you will be well rewarded. There are still issues with the game, random bugs, balance problems; but these are just small blemishes on an already well-polished title. The game can be a lot of fun if you spend some time with it. It’s testament to the quality of gameplay that we haven’t set the game down in almost 3 months now!

NOTE: We’ve provided the game on our DVD this month; don’t forget to head over to http://dgit.in/TribesA for registration and freebies.