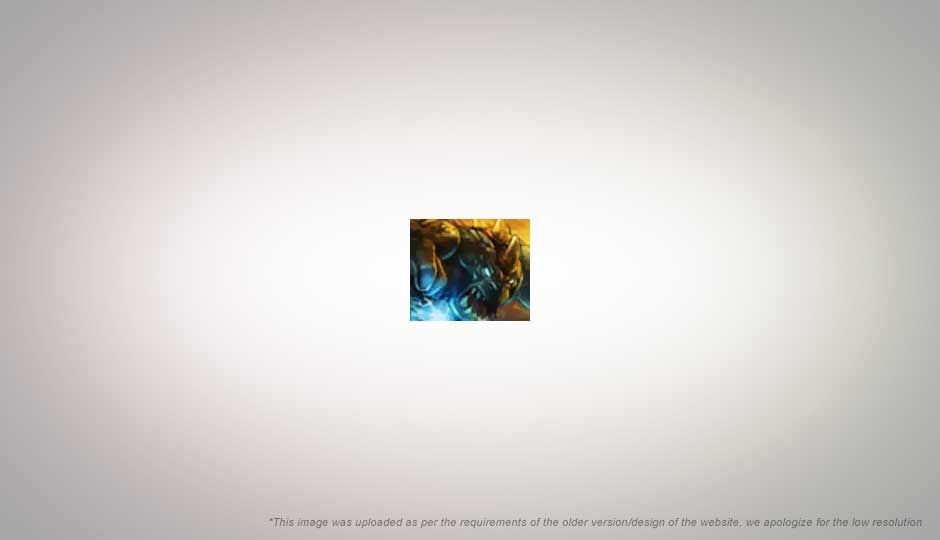 Torchlight is a great game and at least in my books, a formidable contender for game of the year. The cherry, on the icing, on the cake is the delectable priceï¿½the game is on limited sale till the January 4th 2010, for a price tag of little under USD 10.00. Ordinarily, the game retails at USD 19.99, which for my money is still a pretty sweet deal.

Torchlight, true to the indie games tradition, snuck-up on us with what could be described as the best action-RPG to grace us, since maybe Titan Quest. Even though this game is a debut release for Runic Games, the studio’s development team has some heavy-weights from other studios like Blizzard and the now defunct Flagship Studios. Torchlight in essence is— like any other games in its genre— a Diablo clone and since the founders of Runic Games are ex-Blizzard, they have been a little more liberal with their inspiration. Not to take anything away from this game, Torchlight shines with brilliance in almost every conceivable aspect you would expect from a game in its category. It has the polish and finesse about it that any AAA title would aspire for. In addition, unlike the other aspirants that are generally system hogs, Torchlight is a great looking game that can run on any machine that was built in the last ten years or so. In fact, this game does not even require a video-card with shaders, and it has been specifically optimized to run on a netbook. So if you are one of those guys who have always planned for it, but never could get around to building a power-rig; here is your chance to enjoy this truly kick-ass game that can visually stand-up to any other game in its category. Of course, this is only true if you like what hack-and-slash action RPG games are all about in the first place— let's find out. 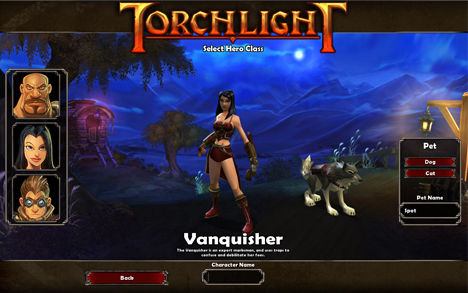 The way Torchlight has been designed it can be played in a pretty mindless fashion; simple running through dungeons and killing everything thing in your path till you encounter the game's final boss-- and well, you kill him too. This game's first two difficulty levels keep things balanced in such a way that you will only occasionally have to deal with enemies that are just as or more powerful than your character. The levels where the main quest takes place is a linear network of mines that runs deep underneath the town of Torchlight. So, there is virtually no room for getting lost or confused and this guarantees a steady supply of action till the very end. 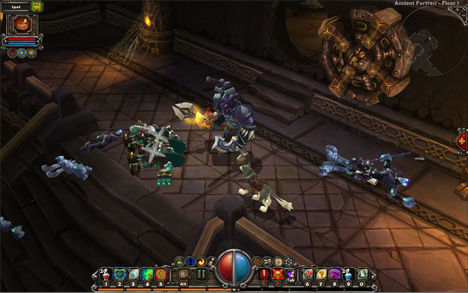 Considering only the main quests, the game takes about 10- 12 hours to beat on Normal difficulty setting. The choice of how to spend those hours comes in the form of three character classes—the customary melee specialist, a spell-caster and a ranged fighter. Accompanying you on your adventure is your choice of a pet between a Dog and a Lynx. The pets in this game are arguably the most useful side-kicks you will ever find in a game. Either of the two animal companions can admirably duke it out in melee combat, cast the same spell as your character and carry the same amount of loot. In addition, the pets can be sent back to town to sell the contents of their stash, while you continue with your murderous rampage. Wait, there is more—feeding them certain types of fish will momentarily turn them into even more powerful creatures—more on this later. 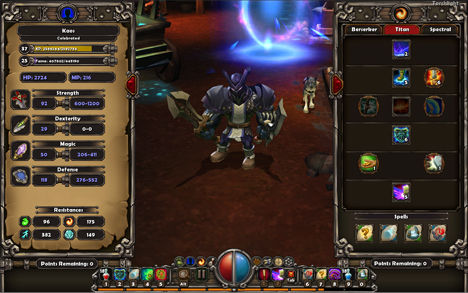 Character development in Torchlight is simple and very flexible. Each character has access to three sets of skills that are locked by character-level requirement. Thankfully, unlike most action-RPG, Torchlight does not have a skill-tree structure where you are forced to add a point into the skill just because you want access to something that is a level deeper.
True to RPG tradition however, the game rewards the players with experience points for slaughtering enemies and completing quests. In addition to this, Torchlight also features a Fame system—killing a mini-boss, level boss or a particularly strong enemy rewards the player with Fame points. So effectively, a character can level -up in experience or in fame. Every time a character levels-up in experience, he is rewarded with five stat points and one skill point. Leveling-up in Fame rewards the player with a single skill point and a title. The Fame system would have had a lot more resonance if the game had multiplayer options—sadly, Torchlight only features offline play.

This simplicity is only one side of Torchlight and if you are an obsessive action RPG patron, there is lots to do also. One of the more noteworthy features of Torchlight is the relatively relaxed weapons system. If desired, a Destroyer (role: melee tank) can not only wield a fireball spewing magic wand, but actually specialize in it. This kind of freedom extends to all three classes as a spell-casting Alchemist character can become truly formidable with a melee or even ranged weapons. Also, dual-welding is available to all three character classes and the coolest thing is that the game allows you to wield a melee and a ranged weapon in each hand. This of course saves you from the hassle of constantly switching between two weapons types to adapt to changing battle situations. Moreover, spells in the game are also accessible to all the classes, offering even more options with character progression. So the truly adventurous can really experiment with these options and come up with an atypical character build. 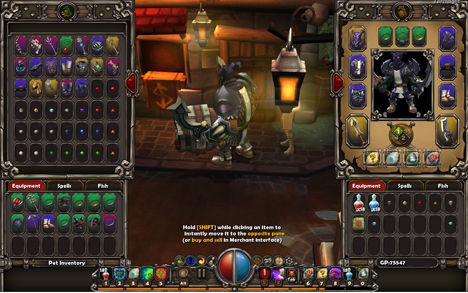 There is also reason to rejoice for the obsessive- compulsive item collector who is every hungry for more space to stash away the spoils of war. Between your character's inventory, the two storage chests and your pet's inventory, you can store a total of 126 items. Of the two storage chests, one of them is shared between all the other characters you might create—so this makes item collection a highly productive and fruitful venture.

If for some inexplicable reason all the killing and item collections is making you weary, you can spend some quite time fishing in special spots scattered throughout the game world. As mentioned earlier, these fishes can be fed to your pet to indulge in some shape-shifting mayhem. If you truly have a fisherman’s patience there are more types of rewards waiting for you. Possible catch of the day includes items consumable by the playing character, socketable gems, a couple of Easter- eggs and even the most popular fishing cliché, boots. Other diversions include exploring various item creation combinations at the local transmutations lab, testing your luck at gambling by purchasing items with unknown magical properties or even paying a visit to the town mage to imbue items with random magical properties. 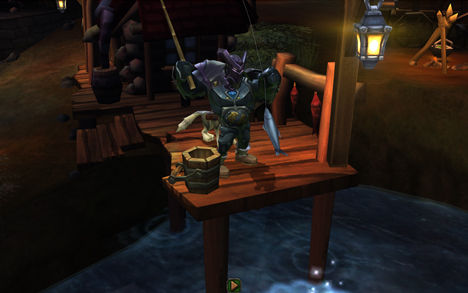 After conclusion of your main quest, you can continue adventuring or decide to retire your character. There are maps of several random dungeons available with merchants, at least one secret location to discover and of course there is always the endless pursuit of completing set-pieces. I finished the game with my character at level 33; however, you can continue to build your character supposedly up to level 99. Torchlight has an interesting option in retiring your character— your descendant gets one of your chosen items as an heirloom and starts off stronger than a brand new character. I did not have the heart or the desire to retire my character just yet, but it's good to know that there is such an option.
Now most of the last few activities will be all too familiar to fans of Diablo II. Actually, when you play through Torchlight, you will come across several instances where the game is a bit too much like Diablo, bordering on plagiarism. Perhaps, if you can accept that when a guy walks out of an organization he takes his ideas with him; then these striking similarities may not really bother you much. Besides, Torchlight is by far not the only game to borrow elements from Blizzard's masterpiece, and most of them have done far worse than what Runic Games has delivered. 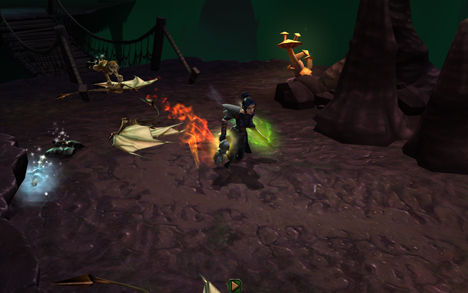 Even though Torchlight is a praiseworthy effort from a relatively small studio working with mostly open-source technologies, the game is not without flaws; albeit minor ones. The biggest gripe I have with the same is the way in with it handles summoned companions. There is no indication of the minion's health and it is often very difficult to visually distinguish the summoned creatures from enemies. Also, picking up the good stuff from the pile of enemy drops is often a cumbersome process as the items are tightly clustered together. In an otherwise tight game, these are surprisingly conspicuous oversights.
And then there is a total lack of multiplayer support that is sorely missed. Since this game is meant to be a precursor to an MMORPG based in the same universe, it is strictly single-player. However, the game is supposedly very mod-friendly and to support that Runic Games has recently made the game creation toolset available to public. So, all hope is not lost and maybe we can count on the game’s community to add multiplayer support, sometime in the future.

Torchlight is a great game and at least in my books, a formidable contender for game of the year. The cherry, on the icing, on the cake is the delectable price—the game is on limited sale till the January 4th 2010, for a price tag of little under USD 10.00. Ordinarily, the game retails at USD 19.99, which for my money is still a pretty sweet deal. 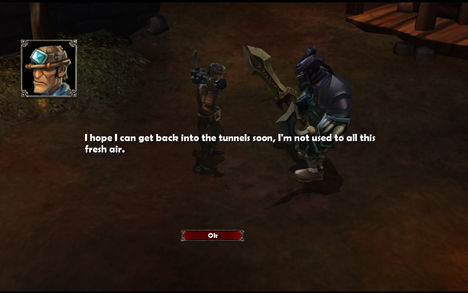 System Requirements
Windows XP or later, x86-compatible 800MHz processor, 512MB of RAM, 400MB Hard Drive space, DirectX-compatible 3D graphics with at least 64MB of addressable memory (such as an ATI Radeon 7200, NVIDIA GeForce 2, or Intel GMA 950).
An Internet connection is required to download the game and activate your installation. 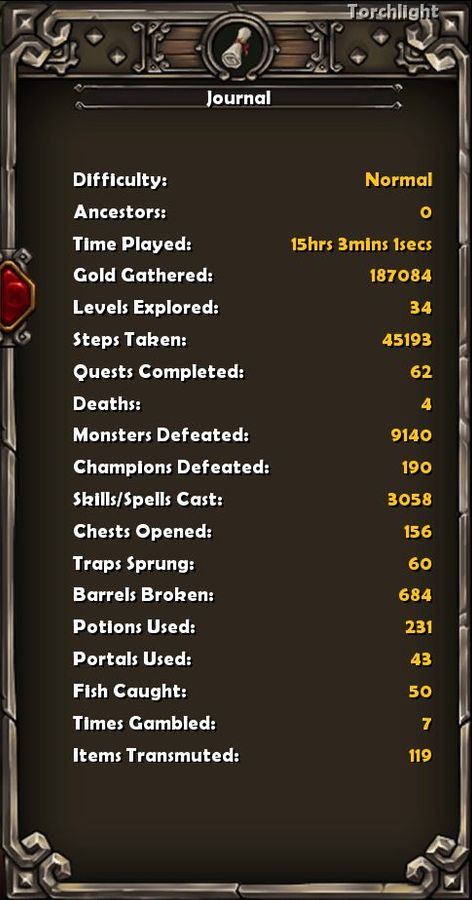