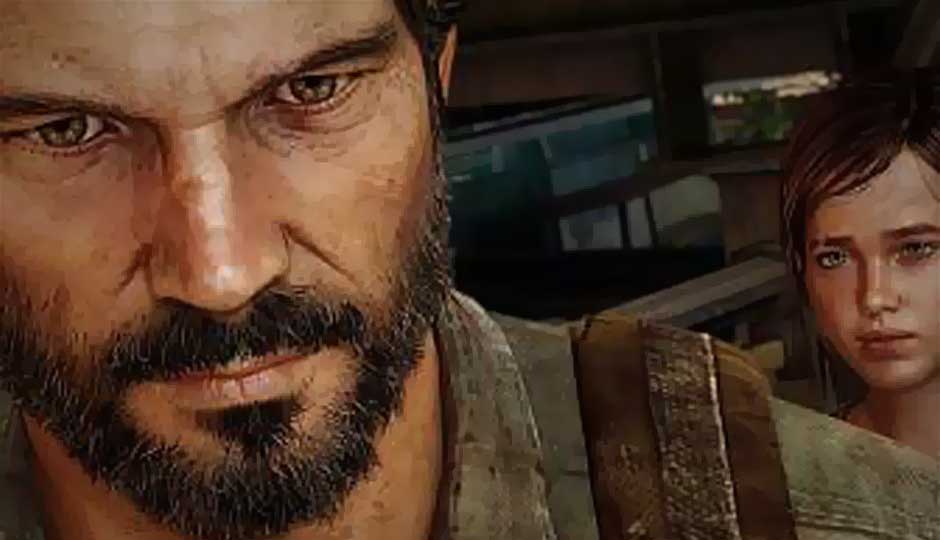 The Last of Us Review

The Last of Us is based in a zombie universe that has been tried and tested quite a few times. Itï¿½s the package that is awesome. The disappointment I faced was that after 15 hours of playing the game I had to switch off my console and join the real world. The journey is well paced and the game has a good story that is driven by a lot of emotion.

The Last of Us detailed review

The Ps3’s is nearing the end of its lifecycle and Naughty Dog has one more game for us as a parting present. Put simply, The Last of Us is an amazing game and there are a number of reasons for this, which we will of course explain in our review. The Last of Us falls under the survival horror genre, which has seen a number of games that we have appreciated including Resident Evil, Silent Hill, Dead Space and more. So why has The Last of Us captured us? Read on to find out! 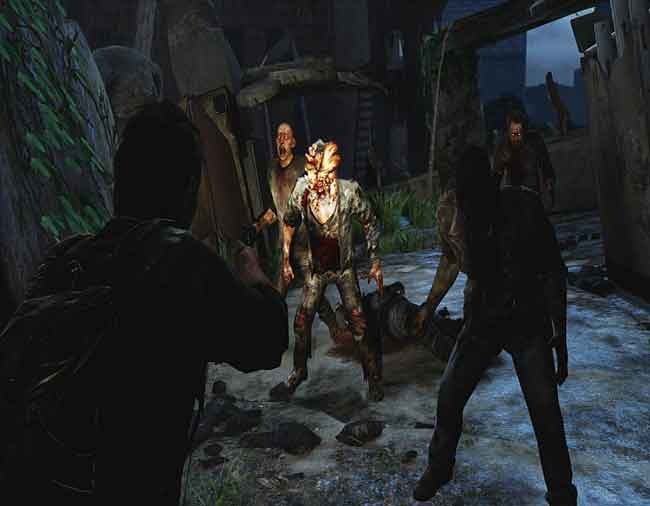 Story
A virus has spread turning the population of the world into zombies. It’s a tried and tested formula which we have not only seen in a bunch of games, but movies as well such as Zombieland, 28 Days Later, I Am Legend, The Walking Dead (TV Series) and many more.

The Last of Us follows the same premise. There is an outbreak that transforms people into zombies called “The Infected” and as usual disaster follows. It has been 20 years since the outbreak of the virus and you don the role of Joel, a middle-aged man living out his days in a quarantined zone. As circumstance would have it, you tasked with delivering a 14-year-old girl, Ellie, to a resistance group called the Fireflies. A task of course, is easier said than done. We will of course not tell you the reason behind your mission, as that is the core of the story. 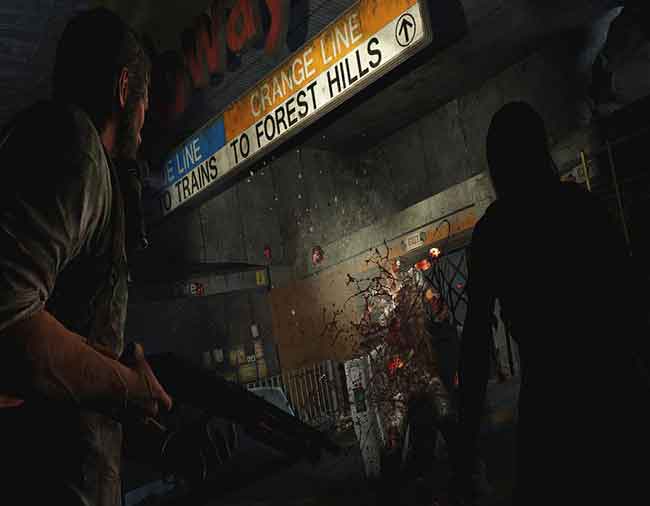 The plot of the Last of Us for some may be predictable especially if you have seen a bunch of zombie movies and played the games but it’s the execution of the plot and the emotion that drives the characters that will really keep you hooked. The story is no BioShock Infinite in a manner of speaking, but that doesn’t mean that it isn’t entertaining. The plot becomes predictable at points and sometimes really takes a turn that will make your jaw drop for a moment. 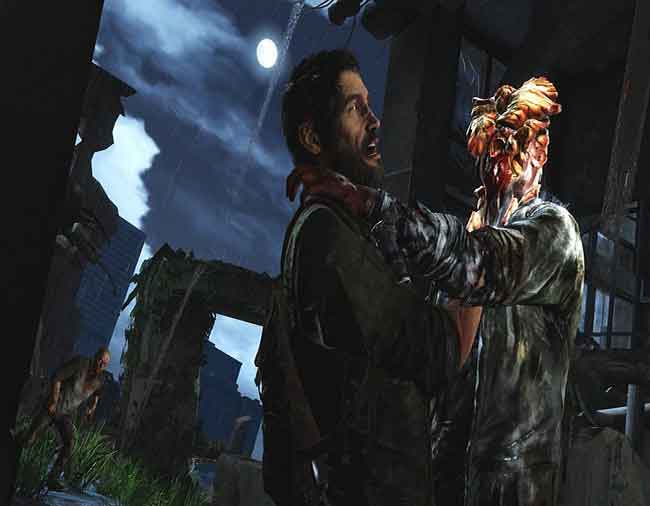 The story of the Last of Us isn’t unique and sticks to the tried and tested infected zombies formula, but it is interesting nonetheless with plot twists to keep you engaged.

Gameplay
If you have played any third person action adventure game, especially the Uncharted series, you will feel right at home with the controls of the Last of Us. Joel is a lot stiffer to control when compared to Nathan Drake from Uncharted who felt agile and a lot like Indiana Jones. Joel on the other hand feels slightly rigid. His hand has a slight shake while aiming which shows his age and the fact that hi isn’t a military man. That being said, Joel can be pretty brutal when it comes to hand to hand combat. You can sneak up on your foes and choke them for a silent kill or sneak up on them and stab them in the neck for some brutal kills. You can also use the environment like shelves, walls, tables, etc. to smash their heads into. There is quite a high level of brutality in this game especially of you attach a scissors at the end of a pipe to take down your foes with a one hit kill. 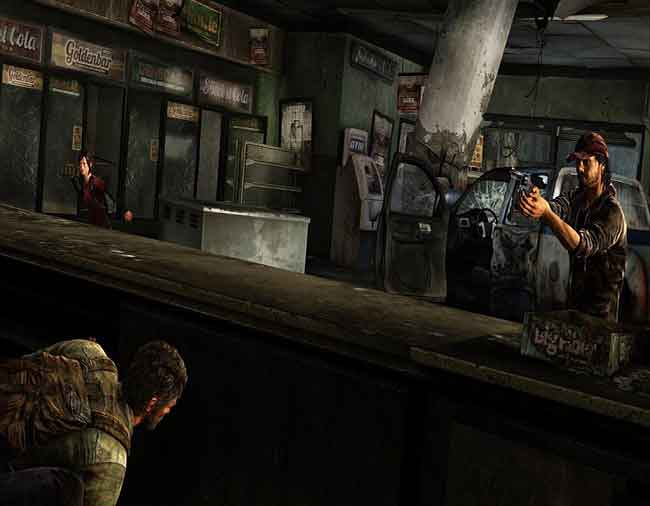 Speaking of foes, you will encounter both humans as well as the infected in the Last of Us. The humans are essentially survivors who want to kill you and take your supplies. The other foes are of course the infected. There are two types of infected to deal with – the runners and the clickers. As the name suggests, the runner are the infected that will charge at you the minute they see you or have the slightest intimation of your presence. Even if they get too close, you can push them off or take them down with hand-to-hand combat. 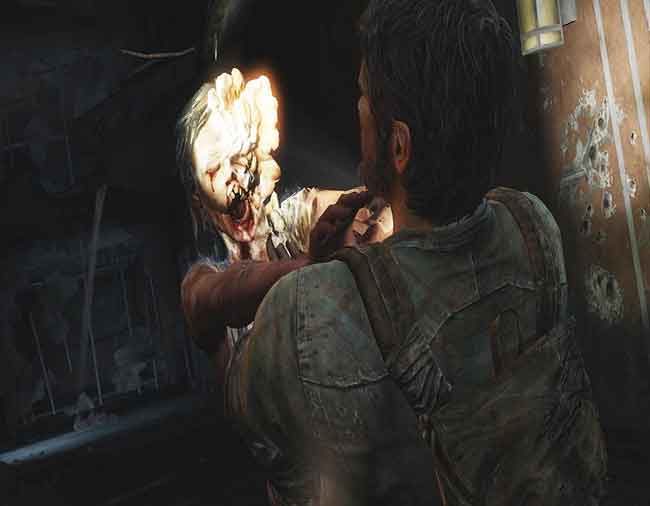 The clickers on the other hand force you to be stealthy. The clickers can’t see and just like sonar, use a clicking sound to judge their environment. One sound from you and they will come charging in your direction. Once a clicker gets his hands on you, you are dead. It’s a one shot kill. 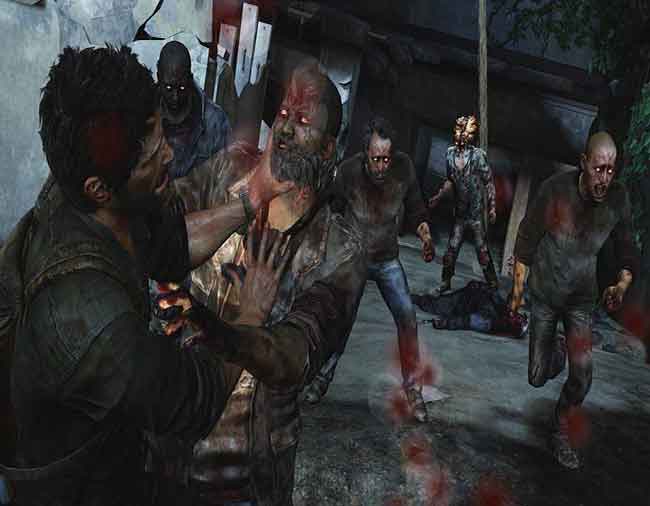 Since the Last of Us universe is a post-apocalyptic world, you have access to limited resources, so even though you have guns, ammo is scarce and there is always a smarter way to approach the situation. You can avoid detection and use stealth as an option. For a brief period during a fight you can also use an enemy as a human shield. You can stun the enemies by using bricks and bottles scattered throughout the level and more. 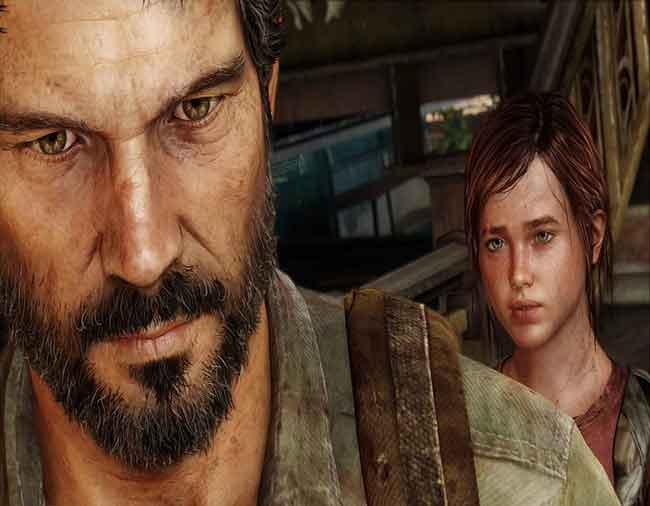 Just like in Splinter Cell: Conviction, once an enemy knows where you are, they will all converge on your last known position. You will need to break their line of sight and stay hidden. Once you are detected however, sneaking becomes really tough and it is better to just tick off the human enemies one after the other. As far as the clickers are concerned, we’d say throw a bottle in the opposite direction and sneak past. 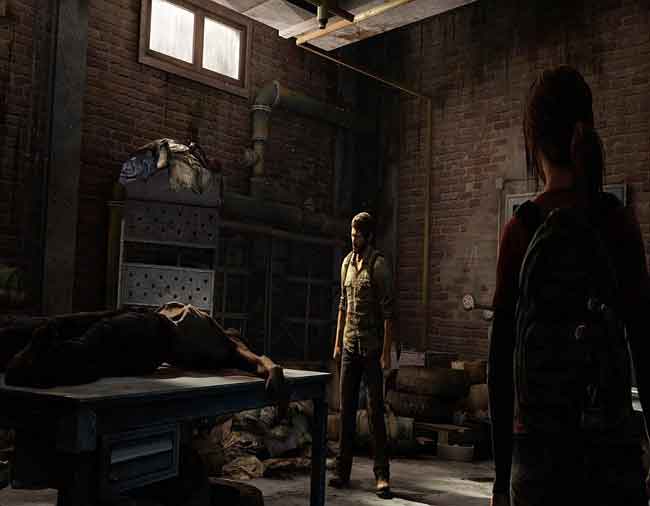 Joel also has the ability to “listen” to the footsteps or other noises emitted by the opponents. This helps him pin point their location. The listening ability is limited by distance so you will only be able to hear and spot enemies who are close to you. This lets you spot enemies in the other room as well giving you a tactical advantage at times. 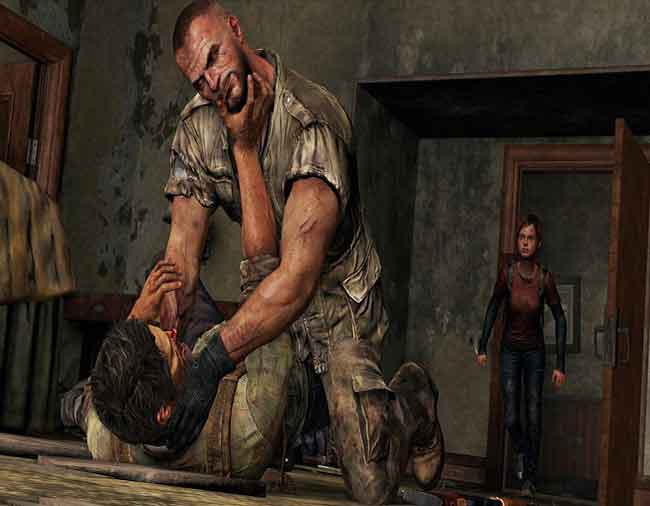 One good thing about the gameplay in the Last of Us is that there is no limit to the number of guns you can carry. You can only access a limited number of guns at first but you can carry the rest in your backpack and use them as and when you require. The beauty of the Last of Us is that when you need to access the contents of your backpack, you do so in real time. There is no pause menu that lets you access your weapons or health kit. This adds to the immersion experience of the game. So if you need to switch a gun or heal yourself in the middle of battle, you better run for cover first. 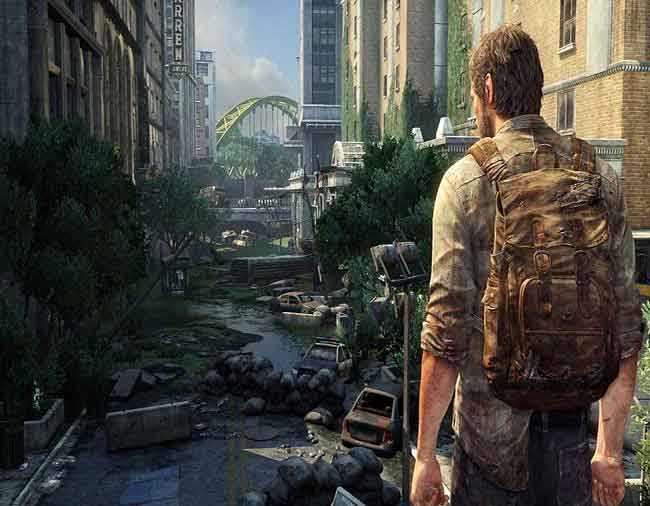 Joel also has the ability to construct some equipment such as Molotov cocktail, mines, a shiv knife, health kits and more. You construct all these items with resources you find scattered throughout the environment in the Last of Us. So, you could use alcohol and rags to make a weapon or a medical kit, your choice. 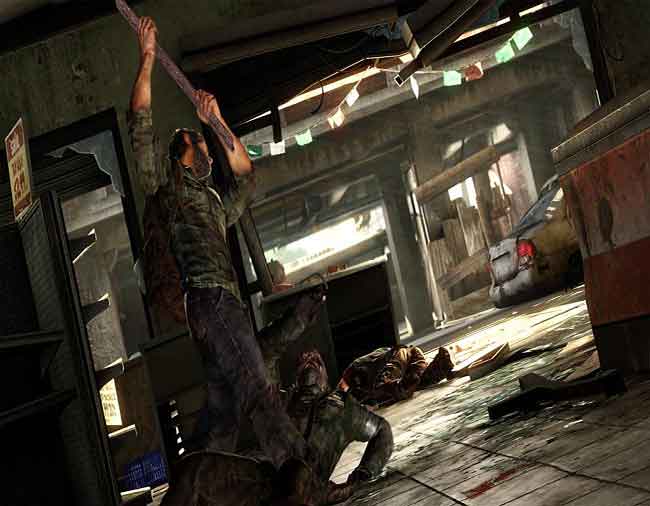 There aren’t any challenging puzzles in the game. You have the occasional how do we cross this section here and all you need to do is pick up a ladder from here and place it there or pull a switch here to access something there. So on, and so forth. 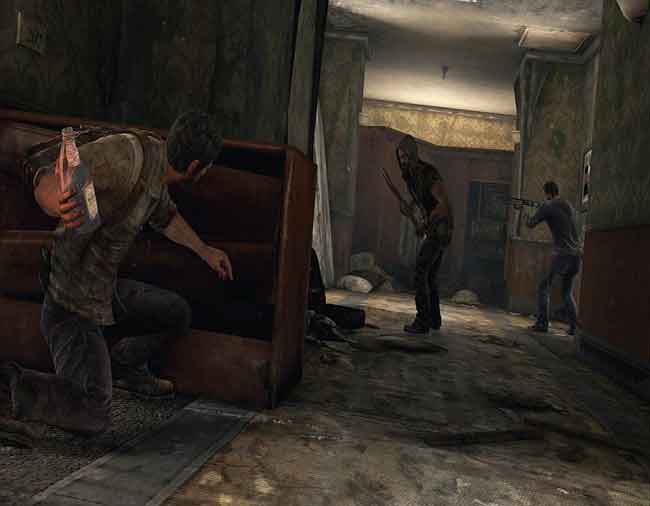 The pacing of the Last of Us is very good. At one moment you are taking on human enemies, the next the infected, suddenly there is a high octave chase sequence with a bit of strolling, environment traversing and sight seeing thrown into the mix. Being Naughty Dogs trait you can expect some pretty intense cinematic experiences at regular intervals too. 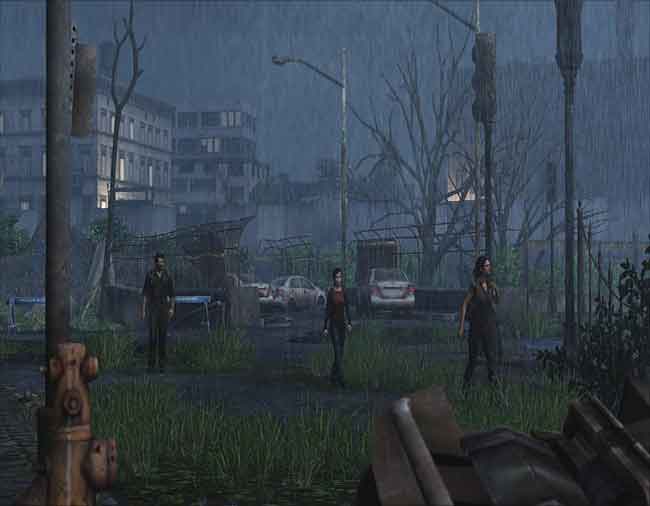 Even though an AI character accompanies you throughout the game, you don’t have to look out for her. Sure, if she gets attacked, you have to save her, but in our play through, Ellie didn’t die even once.

Depending on the difficulty you choose, it will take you 13 to 18 hours to complete the single player campaign and that is pretty good. 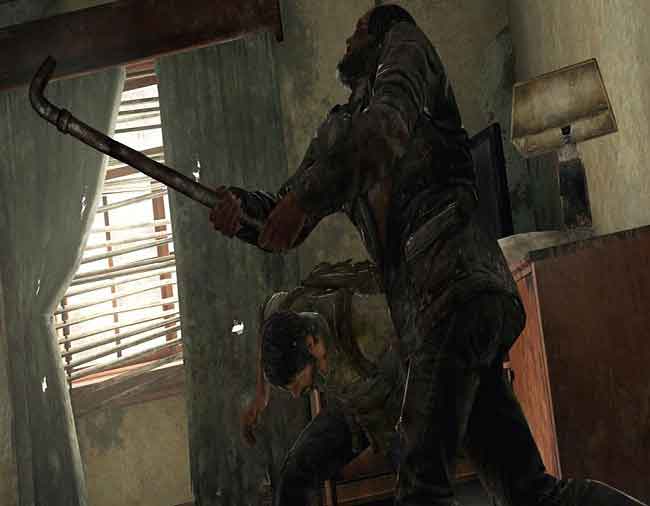 Once you are done with the campaign, you have multiplayer to keep you hooked for a bit. There are two sides to choose from – Supply Raid and Survivors. As the name suggests you are on either side of the team and it’s a survival of the fittest. The multiplayer is tighter knit when compared to the plethora of modes available in other games and that isn’t a bad thing in this case. You also have the ability to customize your character in appearance as well as load-outs in the multiplayer mode.

Graphics
If you thought the Uncharted trilogy looked good, you need to play the Last of Us. Put simply the game look gorgeous especially the environments of the post apocalyptic world. From the greenery of small forests, to the abandoned town the environments look very realistic. Even the character animation of Joel, Ellie and the supporting cast is great. There are times when you expect the developers to skimp on the supporting cast or the enemies, but that isn’t the case here. 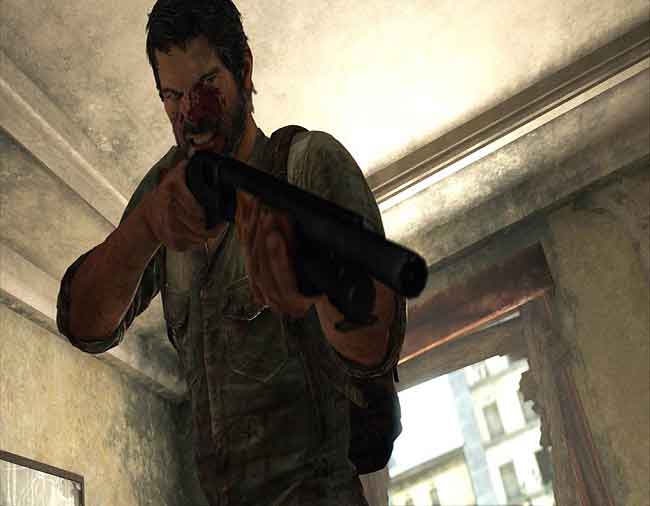 Joel and Ellie deserve special mention since they dominate most of the screen time. Their animations are great especially during combat. When Joel puts his fist through an opponent’s skull you can see the expression on his face.

The cut scene animations and production values of the game can give any Hollywood blockbuster a run for its money. 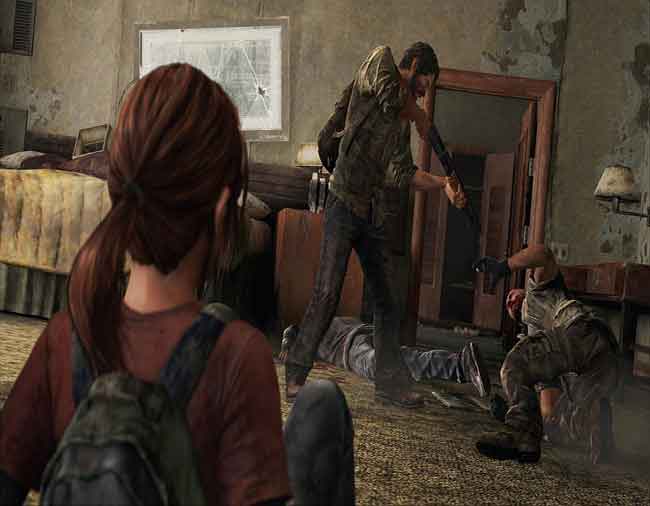 Sound
The audio design of the Last of Us is quite breathtaking. You have sounds of nature that give you the feeling of being in a post-apocalyptic world. When you are sneaking around the environment, and have the infected around there is only silence in the background and this keeps you on your toes. The sound effects of the infected, especially the clickers has the potential to send shivers down your spine.

The voice-acting is top notch be it Joel, Ellie or the supporting cast that you encounter throughout your journey. The sound of a brick or a bottle being smashed on an opponent’s head or pumping rounds from a gun into the infected sounds very satisfying. 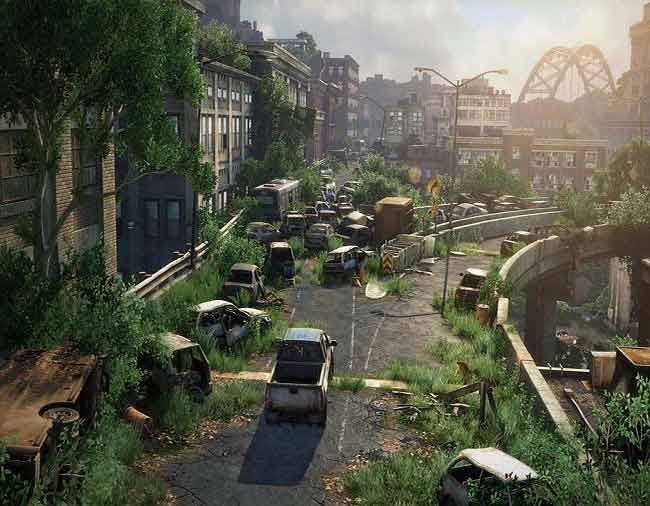 Verdict
The Last of Us is based in a zombie universe that has been tried and tested quite a few times. It’s the package that is awesome. The disappointment I faced was that after 15 hours of playing the game I had to switch off my console and join the real world. The journey is well paced and the game has a good story that is driven by a lot of emotion.

You do get attached to the characters especially since the plot leaves you on a cliffhanger for sometime before coming clean. The ending may not appeal to all, but then again, the game is one that you must play if you like third person action games with horror elements thrown into the mix. The game also gives you a taste of some awesomely brutal combat.