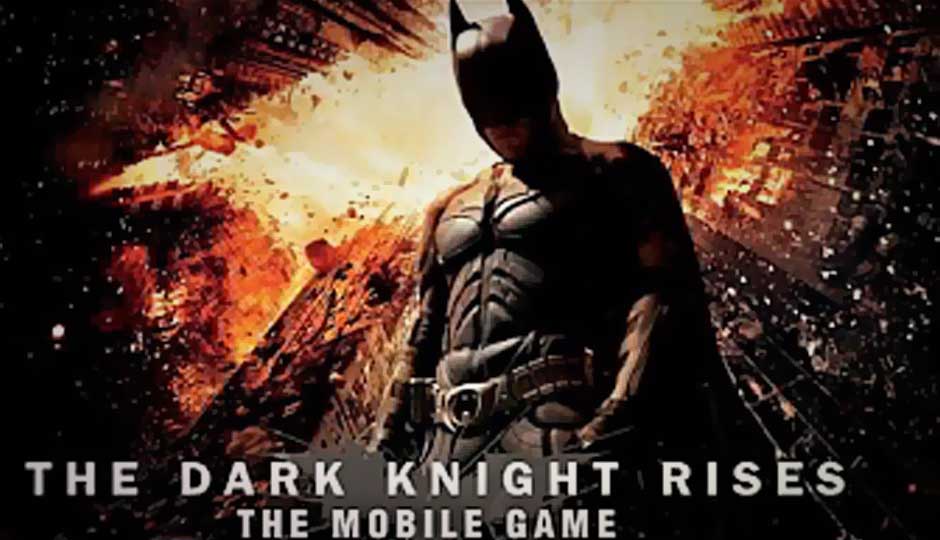 The Dark Knight has risen and set Hollywood box office records. But if you are expecting the same level of excitement from the gaming avatar of Christopher Nolan's blockbuster film, be ready for a slight letdown. The Dark Knight Rises is more of a brawler, albeit a good-looking one, and comes with a stiff price tag!

Hollywood and the mobile games inspired by it have had a relationship that is about as rocky as something from Gibraltar. Most mobile games based on films, no matter how successful, have been watered down affairs that seem to be more focused on delivering some element of the silver screen on users’ handsets without trying to be too innovative. There have been some notable exceptions, of course - we did not mind the Amazing Spiderman game one bit - but by and large, if the game runs on a mobile device and is based on a film, you should steel yourself for a spot of disappointment.

We must confess that we had hoped that The Dark Knight Rises would buck this trend, if only because the previous major mobile title featuring the Caped Crusader, Arkham City Lockdown had been one of the best games we had played on a mobile device. Of course, it took us some time to find out if this were true - first, because the game itself takes a while to download (close to 1GB on iOS, and well over it on Android), and secondly because we kept playing the game in the hope of something great turning up. Yes, you got the unwritten lines right - nothing really did.

For, at its very heart The Dark Knight Rises is a brawler. You play Batman, yes, and you participate in some of the key scenes from the film - relax, we are not giving anything away except to say that many of the main characters of the film do appear in the game. But in the end, it all boils down to a lot of fistfights. The developers have attempted to throw in an element of stealth in some places but these are too few and too often, one cannot choose between sneaking up to a person and simply clobbering the crap out of them. You pretty much know who you can sneak up on and whom you can sock, which kind of takes the novelty out of things. 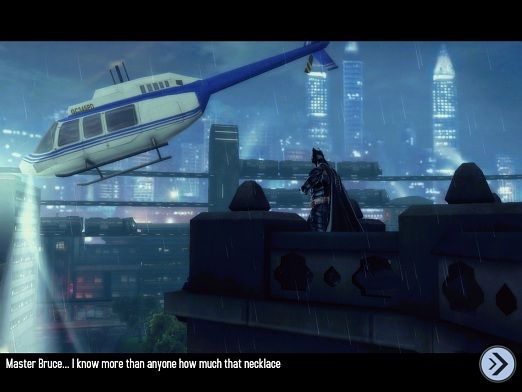 In terms of appearance and presentation, The Dark Knight Rises is outstanding.

Not helping matters is a control system that totally revolves around onscreen buttons. Call us spoilt but after the arrival of games like Virtua Tennis, we actually were hoping for some gesture-based action here. I mean, nothing beats landing a big right on a baddie’s jaw by swiping your finger across, does it? Alas, the developers have stuck to the more tried and tested formula of having a button to punch, another to leap and another to defend. Familiar territory and for that very reason, a tad boring as every battle becomes a button mashing exercise. Even movement is via an onscreen button, although it appears whenever you touch the left part of the display. Round that off with the fact that this expensive a game comes with in-app purchases (for that extra edge in battle and quicker progress) and you really start to wonder if followers of the The Dark Knight deserved this. Gotham City is a jungle, and you will find yourself fighting time and again. With some very clunky controls.

What, however, saves the game from being totally garage bin friendly is its presentation. We will kid you not - The Dark Knight Rises looked awesome on both our iPad and Motorola Xoom. Gotham City looks magnificent with finely detailed buildings, notwithstanding the fact that you see them at night. And then there is the Batman himself - the man looks formidable and when he swings from building to building using the grapple gun (yes, you can do it) or descends on an unsuspecting thug from above, cape rippling, you would need to be made of stone (or to have never read a DC Comics, which is about the same thing) to not feel a thrill run up your spine. And while you do have clearly mapped missions, you can also explore the city as you wish, which can be a lot of fun. The voice acting is excellent as well as is the music and the sound effects. Yep, if presentation was all that counted, The Dark Knight Rise would have been a game that would have thumped loudly on the door of gaming greatness. 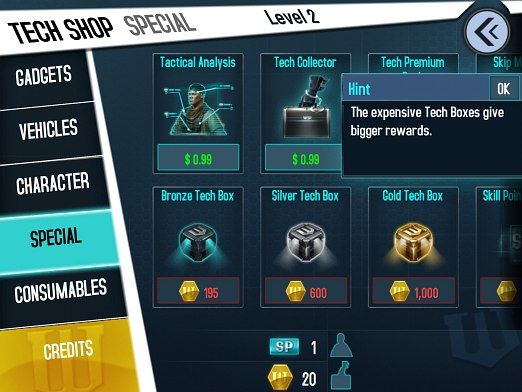 We must confess we were disappointed by the presence of in-app purchases in game that costs a pretty penny. Holy dollars, Batman!

Unfortunately, all this eye and ear candy is undone by gameplay that is neither fluid nor innovative. Those who love the Batman and want nothing more than a good round of fisticuffs will love The Dark Knight Rises. But we are not sure we would recommend spending $6.99/ Rs. 387 on it. Wait for December and we are sure it will get knocked down to 99 cents, which is just about what it’s worth. 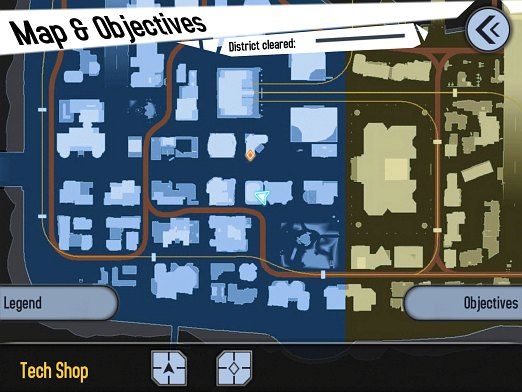 There is a lot to do in Gotham City as the maps will tell you, and you can veer off course if you wish as well.