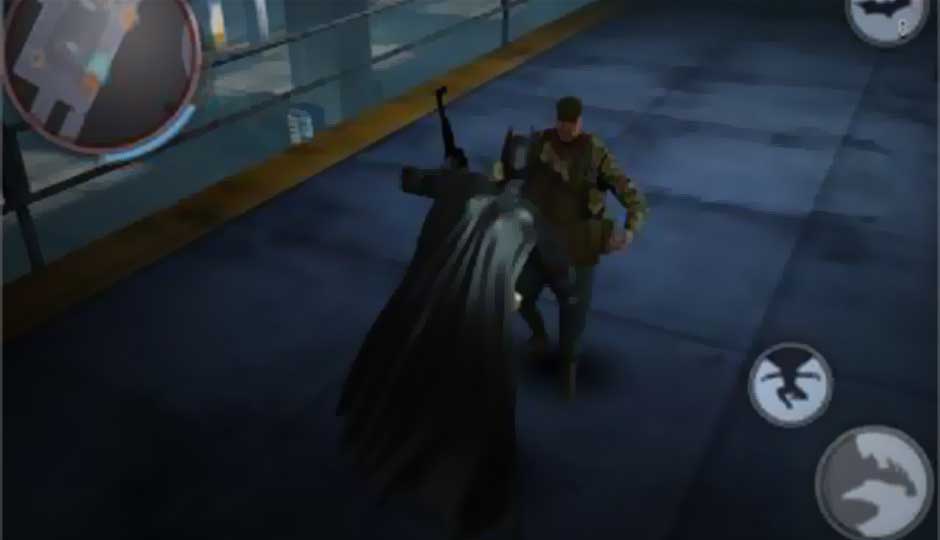 Spoiler alert: See the movie before playing the game because the game features not only Bane and Selina Kyle, but also some of the dialogue from the trailers and TV spots. I haven't seen the film yet, so I'm not sure how much of the movie is spoiled in the game. Tread carefully if you want to go into the film fresh. The game spans six chapters (with multiple missions per section) that take place in well-rendered indoor and outdoor settings. You bash baddies in diverse locations ranging from rooftops to subway stations to skyscraper interiors to Gotham's streets.

Gameloft, thankfully, mixes up the action so that gameplay never gets repetitive. You glide from rooftop to rooftop, hop on the Bat-Pod, and fight foes mano-a-mano. The familiar Batman themes accentuate the action, adding a sense of drama and peril. The game saves frequently, so if you blow a mission, you're not set back too far back. That's a welcome touch, especially in a mobile game that you may play in short sessions on a commute or in a waiting room.

Combat consists of striking, evading, and countering—each action's mapped to an individual virtual button when you're in close proximity to an enemy. You as the Caped Crusader can can stun enemies from a distance with the Batarang or drag them toward you after ensnaring them with your grapnel gun's cable. You can unleash some truly impressive combo strings (highlighted by very cool slow-motion effects) that are reminiscent of Rocksteady's critically acclaimed Arkham Asylum and Arkham City games.

The Tech Shop is where Batman powers up his abilities and related gadgetry. You can increase weapon potency, Bat-Pod capabilities, and also outfit Master Wayne with abilities that make him even more bad ass. These upgrades, naturally, are earned; some are unlocked when you reach a certain level (Bat-Pod weapons are available at level 26), and there is also a system for outright purchase with credits. Yes, credits. You earn them in-game by bringing sweet street justice to urban vermin, but you can also purchase them with real-life cash. The base purchase is 2,000 credits for $1.99.

The Dark Knight Rises does a lot right in capturing the feel of Nolan's movies, but there are a few quibbles to address. Although The Dark Knight Rises features a beautifully rendered Gotham City, the streets are surprisingly barren for a city that's modeled, according to various DC Comics sources, on either Chicago or New York City. It's a mausoleum of a city that could have benefitted from citizens simply strolling down the street.

The camera can prove troublesome, too, which is a direct consequence of having touchscreen controls. As there's no physical button to let you know when your finger has slipped off of it, you can accidentally swipe the screen, which shifts the camera. It took me a bit of time to acclimate to the tap controls so that I wouldn't be fighting villains blind.

The Dark Knight Rises is another extremely solid game from Gameloft, a company that has mastered bringing near-console quality games to the mobile space. It's a tight movie tie-in that manages to avoid disappointment—a rarity in the video-game industry. If you're looking for iOS Bat-action after seeing the film, The Dark Knight Returns is worth a download.

The Dark Knight Rises (for iPad) : Combat
You can engage enemies with melee attacks, long distance Batarang attacks, and the Grapnel Gun (pictured) which lets you ensnare a baddie and drag him toward you.

The Dark Knight Rises (for iPad) : Credits
Credits are used to purchase new items and level up abilities.

The Dark Knight Rises (for iPad) : Disarming A Foe

When in combat, take out the armed goons first. Your first attack on a pistol-packer disarms him.

The Dark Knight Rises (for iPad) : On Patrol

Scoping out thugs from a safe vantage point. Foes can hear your footsteps when close, so you may want to sneak up on them for a surprise attack.