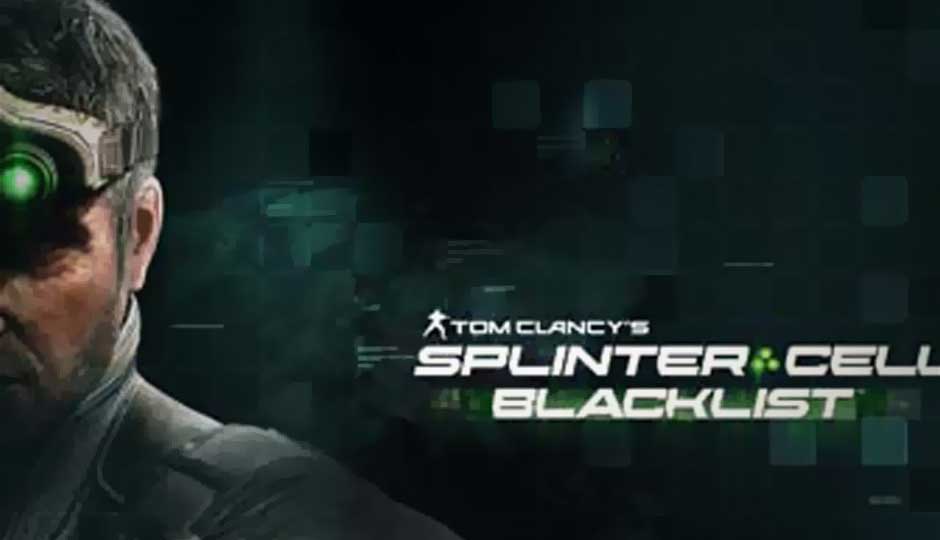 The game overall offers an rather engaging single player campaign, but dont expect miracles from the script. Its a typical "world is in peril, go save it" script, but the way you must approach each level is where the real meat of this game lies. The multi-player modes are a plenty and if the campaign mode isn't too much of a challenge for you, then the multi-player will most definitely keep you occupied for a while.

The 7th game in the famed Tom Clancy Splinter Cell series is a direct sequel to Splinter Cell: Conviction and while the previous game debatably left a sour taste for many fans, Blacklist, hopes to be the series’ redemption. It’s been a good year for gamers, with such great releases, but does Splinter Cell: Blacklist deliver?

Story:
The story that gets the game off the ground is rather straightforward. A rogue group calling themselves The Engineers are about to unleash a wave of attacks on United States of America. The attacks comprise hits on major areas, separated by a number of days and this set of events is called The Blacklist. Sam “themostawesomespyever” Fisher inadvertently gets caught up in the plan when he barely escapes the explosion at Anderson Air Force Base in Guam. Now on-board the Paladin, Fourth Echelon’s mobile command craft that exists inside a C-159 transport aircraft, Sam and his crew must chase down the Engineers in an attempt to foil whatever hell the terrorists are about to reign down on the US of A. From here on forth, each mission is kind of connected by somewhat weak breadcrumbs, but each mission in of itself is pretty damn neat.

Play it like you Mean it
Splinter Cell: Blacklist brings back the one element that has always been signature to the series; stealth. Many who played Conviction complained how the gameplay involved way too much gunplay, but thankfully, that is not necessarily the case with the level design in Blacklist. One of the best things about playing Blacklist is that each mission can be played in so many different ways. You can either go “ultra spy” and play the whole thing in stealth mode and use only non-lethal takedowns OR you could go all guns-blazing. If you do choose the latter, chances of you dying are far higher as all levels generally tend to have more henchmen than you could possibly handle. Then there is the Panther mode, which combines stealth with lethal takedowns. If you thought killing three different ways wasn’t variety enough, cue in the weapons and equipment cache. There’s a random guard blocking your path? Do you use stun grenade to take care of him or sleeping gas from your sticky camera? Maybe you could just shock him into submission using the drone’s shock grenade. Then there are the various customizations you can put on your Drone, your grenades, flash bangs and what not, making it possible to play each level in so many different ways. However, no matter how amazing your submachine gun may look hanging off your back, nothing beats the effectiveness of a good pistol with a nice silencer; second best bet, grab a sniper rifle and take out scumbags from afar. Just make sure nobody finds the bodies.

The one area where we found the game play to be annoying was the fact that certain objectives in a particular mission don’t allow you to save in between. For example, in one level, you must turn off two water pumps at opposite ends of a facility, but the game doesn’t autosave after you’ve turned off one pump. The problem with this is that if you die while trying to turn off the second pump, you have to do everything all over again, which is not only time consuming, but ridiculously infuriating. If patience isn’t your forte, Blacklist might come across as a slap across the face to teach you a lesson or two in the art form.

Lastly, the Paladin, your private, mobile command centre doubles up as the game’s menu. You can walk around, access information, talk to your teammates etc. The SMI is where you go to access your mission catalogue. This whole thing is incredibly reminiscent of Mass Effect, and frankly, doesn’t really add anything unique to this aspect of the game. The SMI or the Strategic Mission Interface is where you select the mission to play next. While there are a handful of primary missions directly related to the Blacklist, but it also lists out some 14 odd side missions that can either be played solo or in Co-Op mode. While most of these side missions can actually be pulled off solo, there are some that explicitly require a second player, so there’s no way around that. Quite frankly, the side missions could have been a game on their own with a little bit of polishing, but we are not going to complain about the extra hours of game time while paying for the price of one. 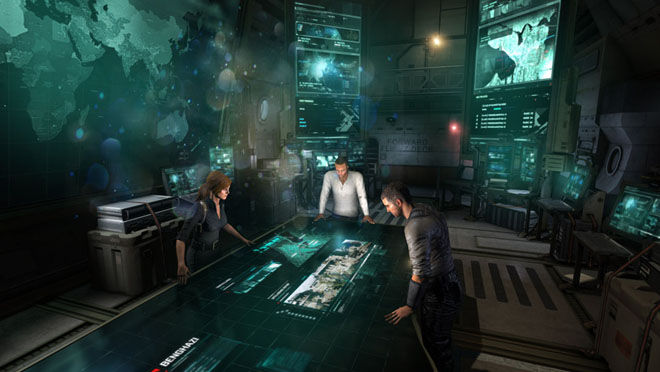 Probably one of the most exciting things about Blacklist is that it brings back the very popular Spies vs. Mercs mode, which had been axed for Conviction. It pits Fisher-like spies (playing in third-person view) against slower, well-armed Mercenaries (playing in first-person). In both the 2-on-2 Classic mode that mimics the original Pandora Tomorrow mode as much as possible and the new 4-on-4 Blacklist version (that adds customizable loadouts) the cat-and-mouse battles between the diametrically opposed classes makes for some of the freshest multiplayer in gaming today. You’re wholly dependent on your partner in Classic, though the larger player groups in Blacklist mode is far more enthralling as the spies try to hack the terminal and the mercs try to stop them.

Visual Stimulation for your Eye Balls
In today’s day and age, we obviously expect that whatever game is launched, it at least bring “next-level” graphics. While Splinter Cell: Blacklist is a beautifully designed game, with intricately detailed lighting and real world physics, there are areas where it falters. While Fisher’s suit and physique are created with painstaking detail, his compatriots, on the other hand, look like they didn’t get their due diligence. Anna, Charlie and Briggs all look like their textures were pulled from 2007, with very little detail on the hair and face, which makes them look extensively plastic.

Where the game does excel is in its attention to detail in the levels. The shadows are precise, the walls intricately textured and even the water ripples seem to be incredibly realistic. If you throw a sticky grenade, you may move around the whole level, but if you come back to the spot where it landed, you will still find the grenade there. This shows that the environment doesn’t just “swallow” elements, but you can also leave little “surprises” around in case you need to use them at a later stage. 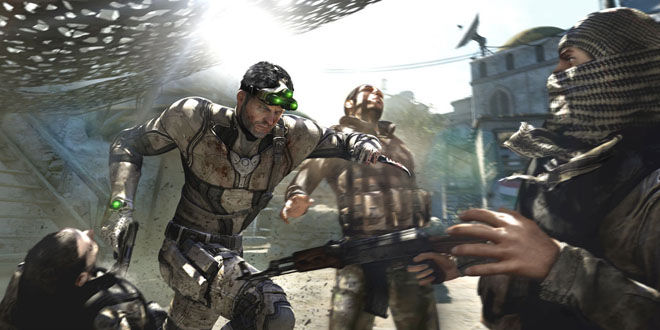 Conclusion:
Splinter Cell: Blacklist isn’t perfect, but it is damn near it. The game puts the emphasis back on stealth, without making it an overtly forced style of game-play. The choice still does rest with the player on how to go about a mission (although some parts do require stealth, there’s no two ways about it). Each level is intricately designed, with painstaking attention to local language, dialects and even scripts. The missions are effective at engaging you (or infuriating thanks to the lack of frequent autosaves), but suffice to say, there’s a little bit of EVERY previous Splinter Cell in here, and only the good bits. Splinter Cell: Blacklist will offer you a good 7-8 hours of engagement, if you play just the solo missions and that number jumps up to 12 hours if you also engage in the various side-missions. Throw in Spies vs. Mercs and you will probably not leave the room for a few days.