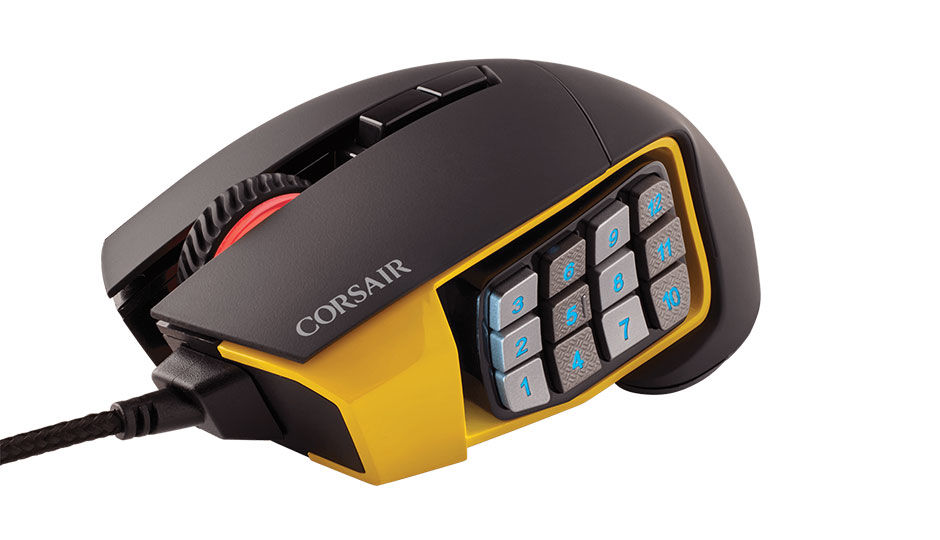 If you’re more of a casual gamer only playing for fun, you should stick to keyboard binds. For competitive MMO/MOBA gamers, the Scimitar Pro RGB is a great choice.

When you’re buying a gaming mouse, there are several aspects you need to keep in mind. The most important ones are the type of games you’re going to play and your hand (or palm) size. FPS games demand accurate sensors while MOBAs and RPGs don’t really require accuracy. MOBAs are more dependent on macros and better buttons. The size of your hand also affects the grip style and if you aren’t comfortable holding the mouse, your gaming experience won’t be satisfying enough. Coming back to MOBA games, you have to deal with several combinations, abilities, and buys. These combinations can be made easier by recording them as macros and assigning them to extra keys or extra buttons on the mouse. It’s a personal preference whether you like using the keyboard or the mouse for macros. If you belong to the latter, the Scimitar Pro RGB generously does so. 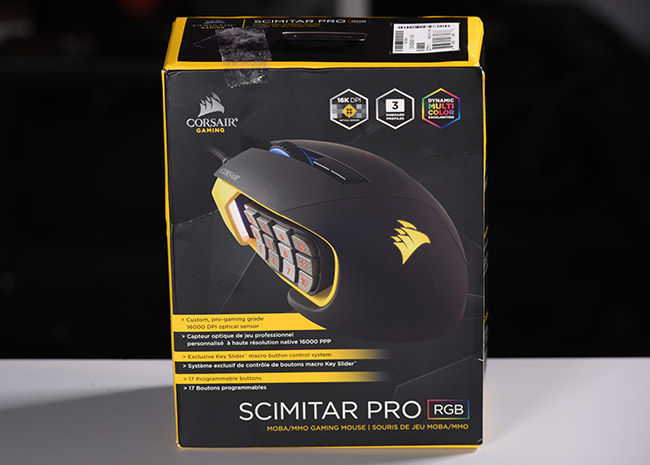 You must have seen four to five extra buttons in a mouse apart from the regular right, left and scroll buttons. Let’s raise that to 12 buttons and that’s the Scimitar Pro RGB. Almost all of your macros can be transferred from the keyboard to the mouse. These 12 buttons on the Scimitar Pro RGB are durable and have textured coating over them. An interesting design feature lets you slide the buttons with a hex key to fit your grip style. Let’s talk about what else does the mouse have to offer. 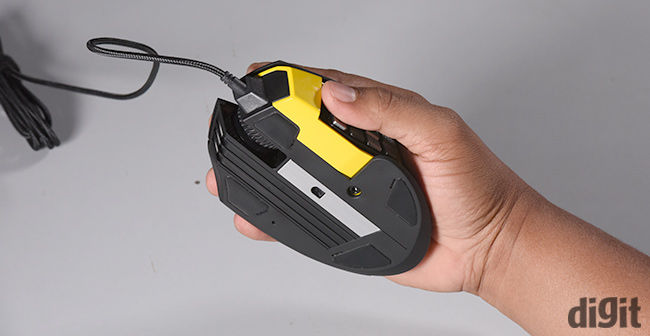 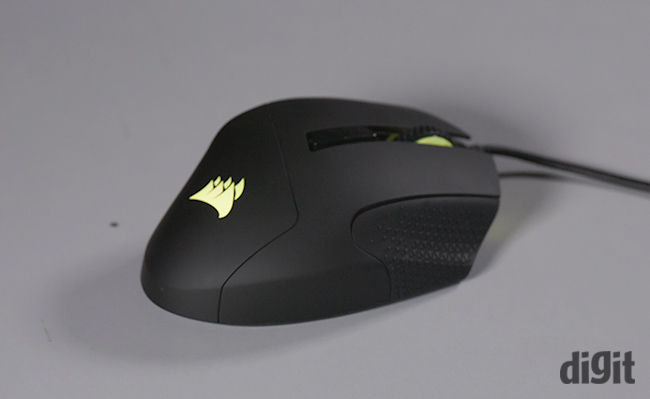 Gaming mice directed towards MOBA gamers are usually expensive because of the vast feature set. The Scimitar Pro RGB also includes abundant features that push the mouse to the top. The 12 extra buttons on the side can be doubled up as shortcuts on the desktop and actions while gaming. There are four RGB lighting zones on the mouse including the macros, logo, scroll wheel and DPI level indicator. The lighting can be controlled using the Corsair Utility Engine (CUE) software. There are two buttons in the middle to switch DPI levels and profiles. One feature we shouldn’t miss out is how the position of the buttons can be changed using a hex key. This allows gamers to tune the position according to their hand size and grip style. 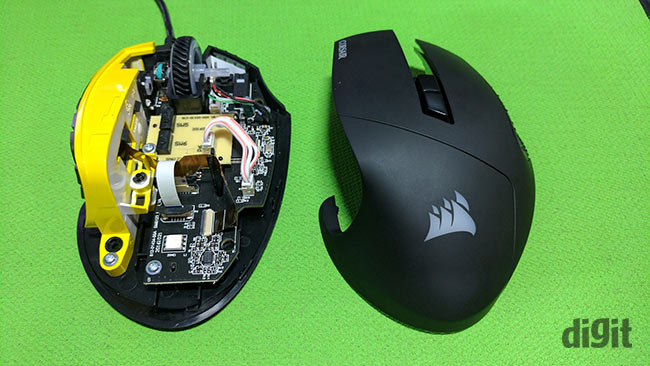 The PMW3367 optical sensor can go right up to 16,000 CPI and practically, you don’t even need such high levels. More doesn’t mean better, and we will talk about the mouse’s accuracy at higher CPI levels under performance. You can scroll through a maximum of five CPI levels, and three different profiles can be set and stored in the mouse. 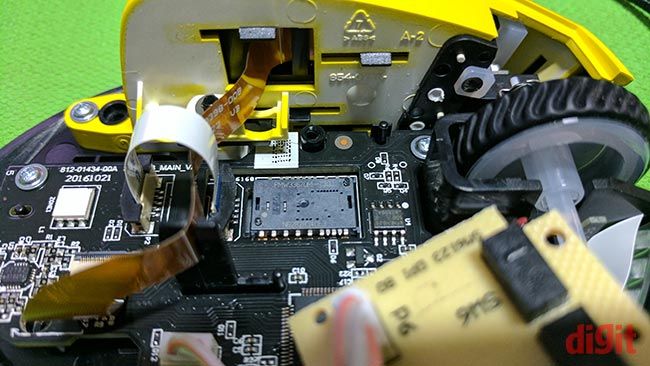 The Scimitar Pro RGB feels premium the moment you hold it. The body has a matte plastic coating that covers the right and left click along with the palm area. This type of texture is becoming a norm on premium gaming mice and also making their way into budget mice. The 12 side buttons alternately have a textured and matte coating for better grip from your thumb. All the buttons provide good tactile feedback so you won’t have to worry about accidental presses. On the right side of the mouse, the textured rubber coating serves your ring and little finger better grip. The top of the mouse has two more switches by default set to switch between DPI levels and profiles. The scroll wheel has a textured rubber coating and the scroll steps are distinguishable from one another.

The right and left clicks have Omron D2FC-F-7N switches under them with a durability of 20 million clicks. Both the clicks feel responsive and the design keeps a low travel distance. The base of the mouse has a metal plate supporting the sensor right above, adding durability. The mouse is comparatively heavy at 147 g and since it’s catered towards MOBA gamers, it’s justified. Light gaming mice are preferred by FPS gamers who tend to swipe and lift the mouse a lot while aiming.

The Scimitar Pro RGB does have an ergonomic design which suits best for something between a palm and claw grip. The prominent bump on the top ensures it perfectly falls under your index finger’s knuckle. If you have medium and large sized hands (more than 19 cm in length and 9.5 cm in width), you will be able to comfortably hold the mouse in the claw-palm grip. For smaller hands, you will be able to hold it comfortably in a claw grip. The best way to have a comfortable palm grip is to follow the bump on the middle and place your hand accordingly. The edge of the bottom of the mouse tapers that perfectly fits right below the lower end of your palm.

The Scimitar Pro RGB uses the new PMW3367 sensor and we found the accuracy to be decent. It’s not as great compared to the PMW3310 found on the Rival 300 and Zowie FK2/EC2-A/ZA11 or the PMW3366 on the Logitech Proteus Core G502. The mouse is made for MOBA gamers hence it would be unfair to expect a high accuracy sensor inside. MOBA games don’t need higher accuracy and they’re mostly dependent on consistency and minimum input lag. While we didn’t come across bad response times, we faced issues during the precision test in Enotus Mouse Test. When the mouse was swiped too quickly, it would lose tracking and end the test. This was the case only on the Razer Goliathus Control mousepad that has a rough and uneven surface. As we increased the CPI levels, we noticed this small bump (starting at 3200 CPI) near the rising curve in our MouseTester graph (as seen in the graph below). Although, we did obtain better performance on the Goliathus mousepad rather than a regular cloth pad, the difference in scores was almost negligible. 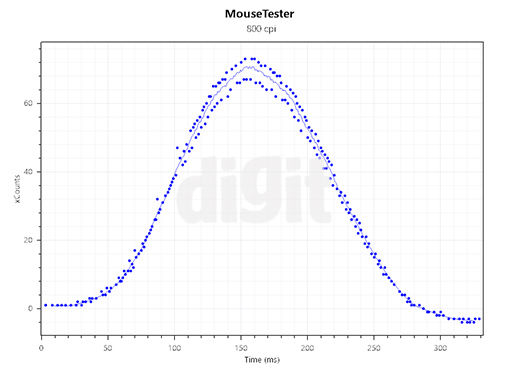 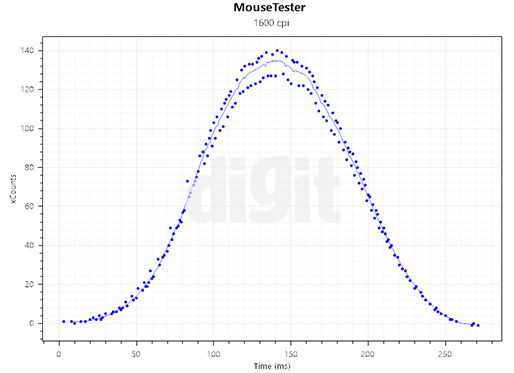 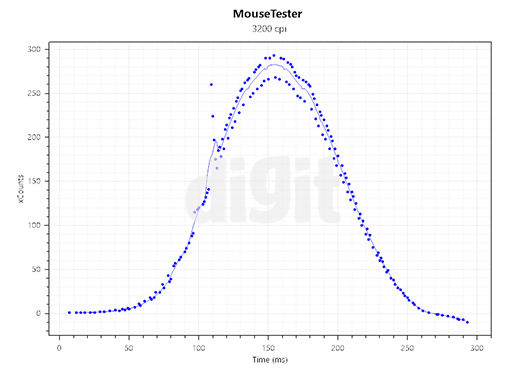 There were a lot of irregularities in the smoothness of tracking as well, which is essentially a sign of inconsistency in the polling rate. To an extent, it was visible in MouseTester, where the polling rate graph was heavily scattered. In real world testing, we couldn’t spot the inconsistency but if it does show up, lowering the polling rate should resolve the problem. The best results were obtained in 800 and 1600 CPI levels, and beyond that, we received the slight bump in tracking as mentioned above. The graphs weren’t as clean and smooth as seen on better sensors but it was surely nice to see consistency in every CPI level at the median curves. We put the mouse to test in Dota 2 and found ourselves in advantage with the macros assigned to the extra buttons. Heroes like Enchantress, Lone Druid, and Chen seemed easier to control. Meepo became a lot easier to play, especially his devastating Divided We Stand ability. 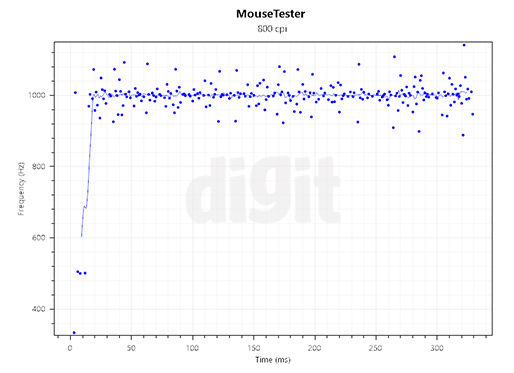 Too much noise in polling rate 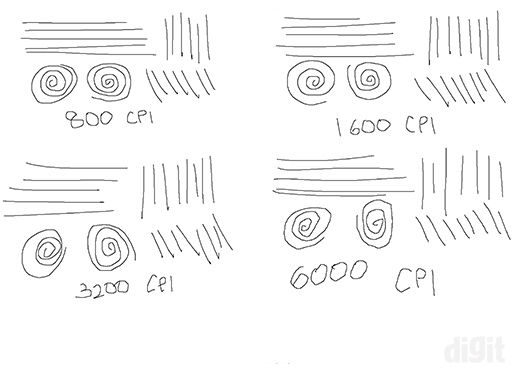 No visible jitter even at high CPI levels

The Scimitar Pro RGB mouse scores the highest in features but loses out on build quality and performance in comparison to the competitors. Since it’s directed towards MMO and MOBA gamers, sensor accuracy isn’t really a priority. What matters the most is how beneficial the features are, and whether the mouse is comfortable. The Scimitar Pro RGB tops our list by ticking off almost every feature possible in a gaming mouse. The staggering number of macros is more than enough to assign actions and buy commands in Dota 2. It’s comfortable for both the palm and claw grip style with medium hand sizes (19 cm in length and 9.5 cm in width). The left and right clicks are durable enough to last for a few years while the entire body is sturdily built as well. The RGB goodness on the mouse is impressive with four different lighting zones, all controlled by the Corsair Utility Engine software.

The mouse is good for FPS games as well, we had a field day in CS:GO after we assigned smoke and flash-bang binds to the extra buttons. The sensor is good enough to aim accurately in CS: GO but the only issue was the heaviness of the mouse. Other than gaming, we assigned the buttons with commands such as copy, paste, undo, tc., and also frequently used special characters. If you spend more time playing MOBA games, spending such a high amount is completely justified. If you’re more of a casual gamer only playing for fun, you should stick to keyboard binds. For competitive MMO/MOBA gamers, the Scimitar Pro RGB is a great choice.