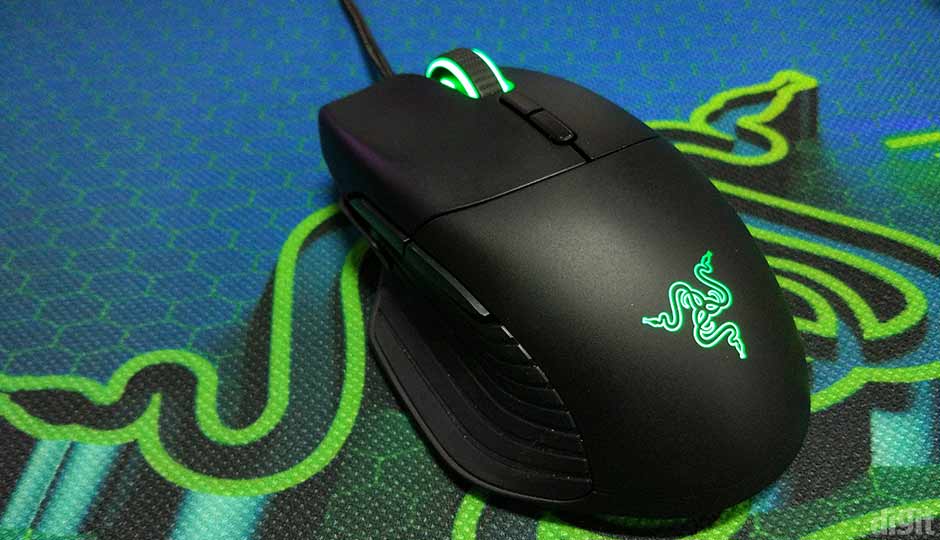 Razer Basilisk Review: A competitive advantage over the DeathAdder Elite

The only appealing and functional feature for FPS gamers on the Razer Basilisk would be the sensitivity clutch or the sniper button. It’s a removable clutch available in two different sizes, so that one can lower their sensitivity when needed. An additional feature which we loved is the customisable resistance on the scroll wheel. Essentially, you can increase or decrease the resistance or steps in the scroll wheel according to your preferences. Apart from these two features, the rest are pretty basic that you would find on any other gaming mouse in this price range. The Razer Synapse software has been improved drastically and now, it’s easier to navigate and apply settings. Creating different profiles with different RGB lighting effects and macros is possible on this mouse. These profiles can be stored in the mouse depending on the amount of macros and lighting effects you add. An indicator at the bottom will display how many effects or macros can be uploaded to the mouse’s storage.

The Basilisk uses the Razer 5G or PMW3389 optical sensor that performs well enough to play FPS games competitively. Razer boasts about the durability of the Omron micro-switches to be up to 50 million clicks. The mouse has a brilliant ergonomic design that comfortably allows you to hold it in a palm or claw grip. If you aren’t a fan of the sensitivity clutch then you could simply go for the DeathAdder Elite since it houses the same optical sensor and similar software support. Only if you are sure that having a dedicated button to control your sensitivity is useful, only then you should consider this mouse.

Mice designed with special additions for certain genre of video games might offer you a competitive advantage over your opponents. However, you will still be able to enjoy a favourable gaming experience if you don’t have these additional features. Mice dedicated for MOBA games will incorporate extra buttons to assign macros or binds. This will ensure that MOBA gamers don’t have to carry out a series of actions one after another but have those sets of actions executed by a single click. Gaming mice made for FPS games usually include an extra sniper or sensitivity button near the thumb area. It’s meant to lower the CPI of the mouse to a preset level, giving you better control, hence improving your in-game aiming precision for sniping in FPS games. Targeting the same FPS gamers, Razer released the Basilisk featuring a removable sniper clutch button and an additional customisable resistance dial for the scroll wheel. We’ll be having a closer look into how the mouse performs and how well it has been built, along with all the features that it offers. 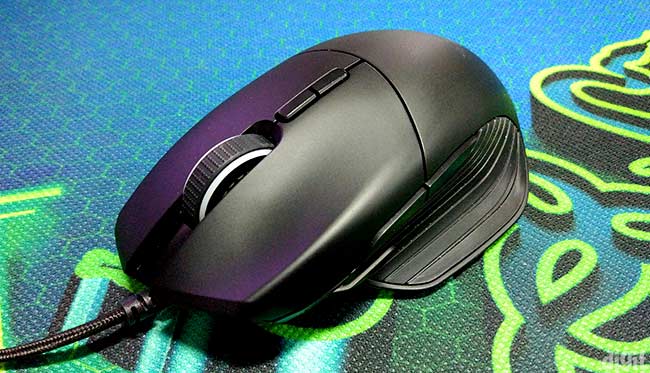 Starting off with the most highlighted feature on the mouse, the sniper or sensitivity clutch on the left side is a handy feature. Now, changing sensitivity on-the-fly is already available on almost every gaming mouse. The advantage here would be that your sensitivity temporarily changes when the clutch is pressed, and once you let it go, it returns to your original CPI level. Say your default sensitivity is set to 800 CPI and the clutch is set to 400 CPI. Your mouse will be at 800 CPI normally but whenever you press the clutch, your sensitivity will drop to 400. And when you let go, the sensitivity jumps back to 800. This can be pretty advantageous if you’re highly competitive in sniping games. The clutch sensitivity can be adjusted in the Razer Synapse software. 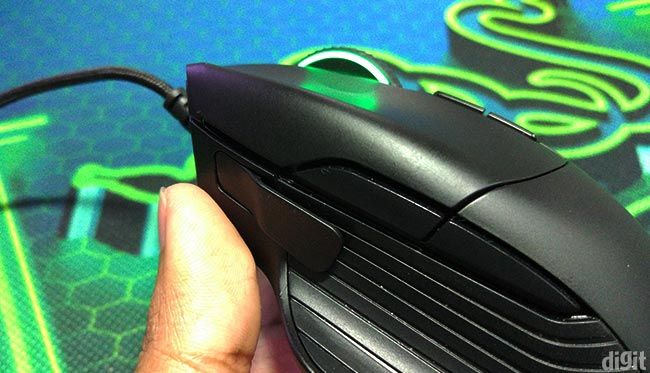 The box also includes an additional clutch in a smaller size and a rubber strip to cover the button. The longer clutch already attached to the mouse might not be favourable for gamers with longer hands (more than 19 cm in length) so they can swap it out with the smaller one. When you’re not gaming with the mouse and find that you’re accidentally activating the clutch, you can replace and block it with the rubber strip. In this way, the mouse becomes a regular mouse. 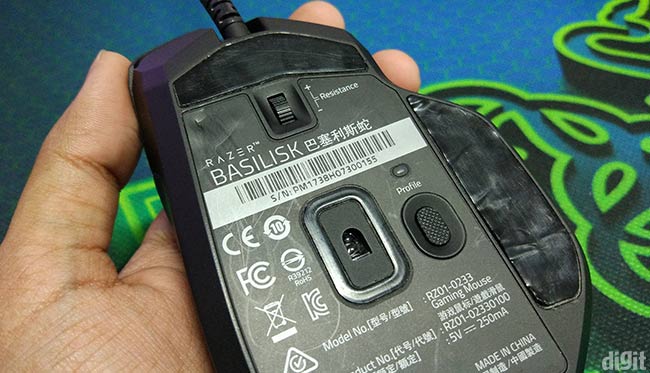 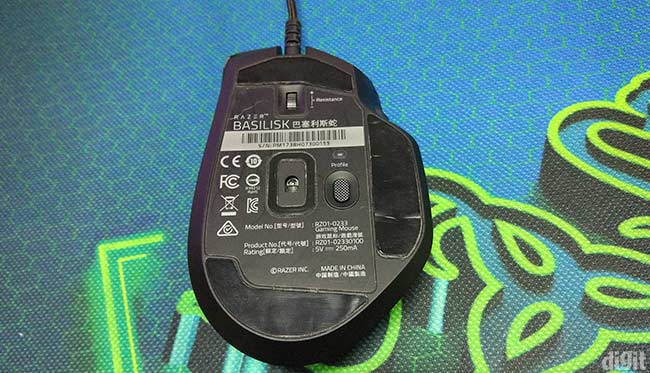 The PMW3389 optical sensor on the Basilisk, also called the Razer 5G, can push the sensitivity of the mouse to 16,000 CPI. Such a massive level of sensitivity is unusable and you shouldn’t be mesmerised with these numbers since they won’t have real-world usage in your routine gaming or browsing sessions. For the right and left clicks, the mouse uses Razer’s mechanical switches manufactured with Omron. They claim that the micro-switches have a lifespan of 50 million clicks, making it the highest-rated micro-switch in the market.

Many new features have been added to the new Synapse software which is still in beta. All the buttons are programmable across a long list of presets and shortcuts. You can program the buttons to open programs, enable keyboard shortcuts, switch lighting effects, control multimedia playback, etc. And all of this can be done just by selecting them from the dropdown menu. The software has drastically improved in this aspect. 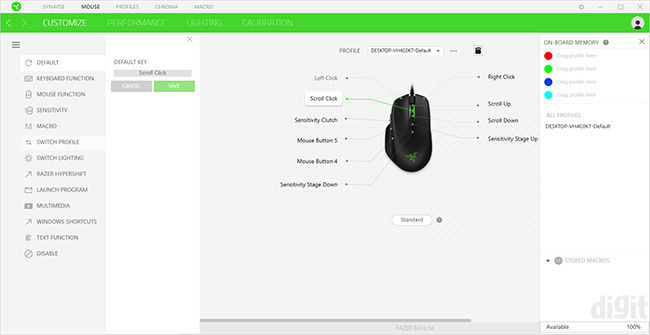 Another place where the Synapse software offers additional features is under macros. Usually, you will be able to assign a set of keyboard or mouse or both functions together in the software. Here, it goes a step forward to provide mouse movement tracking. This means that your macros can now also include the position of your mouse on the screen and add it as a macro function. 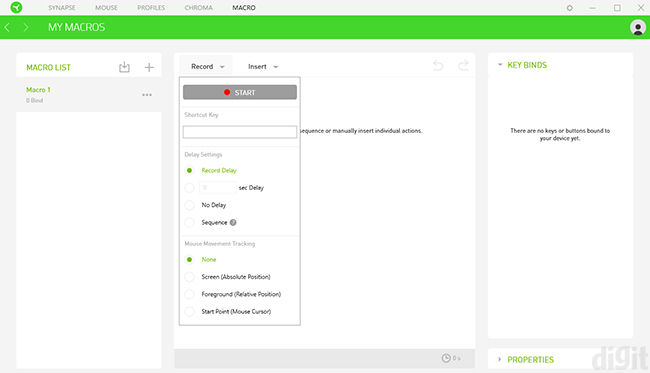 Other than these impressive features, Synapse has went ahead to support lighting sync for games and applications. Chroma will allow your mouse to change lighting based on in-game events or application actions. You can also create your own lighting effects and save them to the mouse. It would have been great if there was an online library available inside the software to browse for user submitted lighting profiles and effects. The basic features of assigning DPI stages and changing the polling rate are supported, along with surface calibration. Since it's in beta, we faced lags while switching between tabs and the software crashed a few times as well. 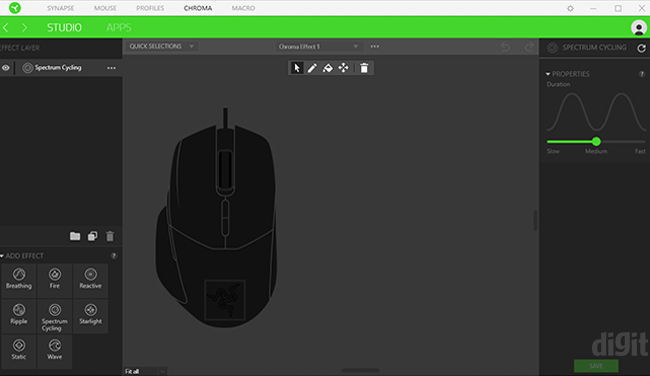 Razer has established its dominance in the gaming mouse industry when it comes to design. The legendary DeathAdder, although ridden with micro-switch quality issues in the older versions, is one of the oldest mouse that has continuously improved to deliver the most ergonomic design. The same experience of the high-end and comfortable design is visible on the Basilisk. If you have an average-sized hand, the mouse fits perfectly under your palms. The thumb-rest on the left side is enough to accommodate your thumb and doesn’t protrude out too much. Actuation forces on the forward and backward buttons are low which means that you can easily click without stretching your fingers. The same goes with the sensitivity clutch. If you find the clutch way too long, you can replace it with the smaller one. 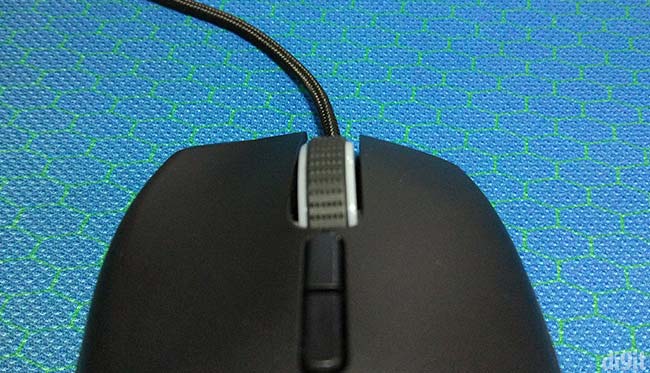 The left click is raised towards the edge and it also has a dent for your index finger, making it comfortable to place your finger. Whereas the right click is bulged at the center and slightly longer than the left click to accommodate your middle finger. The entire design of the mouse takes into account how your palm is going to be placed. Hence, the mouse is slightly curved downwards on the right side and raised on the left. The mouse will offer a great palm grip and a comfortable claw grip as well. Overall, you might not experience any qualms with the shape if you prefer an ergonomic mouse. 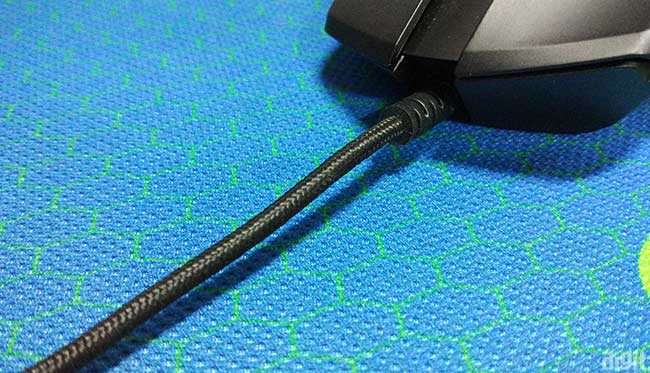 The exterior of the mouse is majorly made of plastic including the right and left click, and the palm area. On the left and ride side of the mouse, you’ll find thick rubber padding that not only offers better grip but makes it comfortable as well. Shaking the mouse revealed some rattling on the inside coming from the metal lever on the scroll wheel. This is the same lever that enables the customisable resistance on the scroll wheel. There are three huge PTFE feet on the bottom of the mouse offering sufficient glide on surfaces like the smooth SteelSeries Qck and also on the rough Razer Goliathus Control Edition mousepads. However, it feels too smooth on hard mousepads like the Corsair MM400. 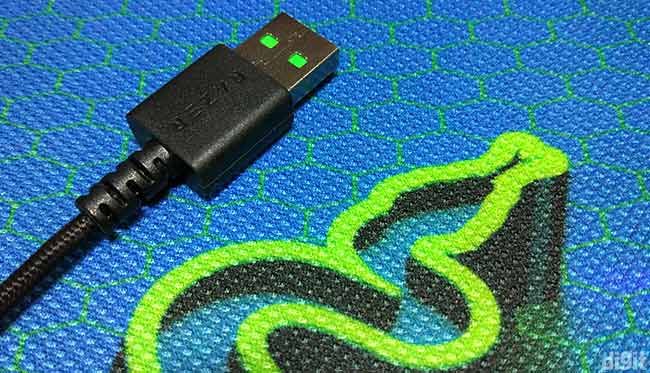 The cable is braided and there’s no gold-plating on the USB connector.

It was easy to open up the mouse with three screws present under each PTFE feet and one screw underneath the main sticker near the top left. Once inside, we found that the interior houses four PCBs, all of them thick and sturdy. 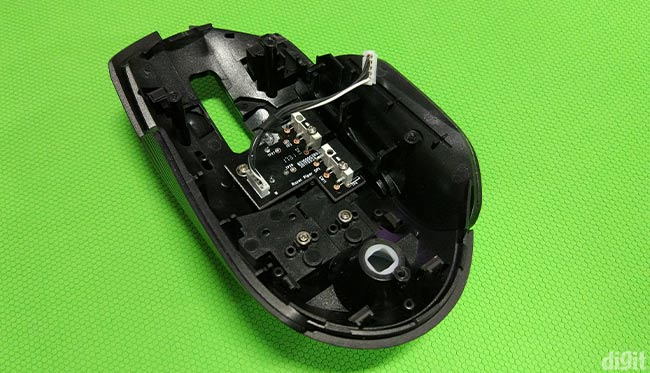 The top cover of the mouse holds the PCB responsible for the forward and backward buttons. This PCB is connected to the main PCB so you should be extra careful when you’re opening up the mouse. 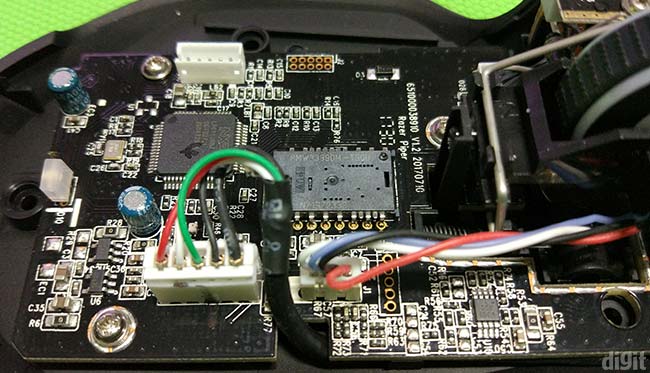 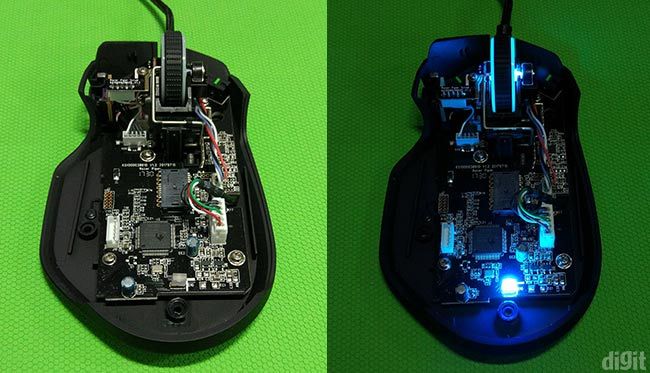 The Basilisk contains two lighting zones, facilitated with two RGB LEDs, one near the bottom and one in the middle of the scroll wheel. The top portion of the mouse has a tiny hole where the bottom LED enters once the mouse is closed. This compartment houses the RGB LED and the translucent layering inside, helps it to diffuse the lighting to the Razer logo. 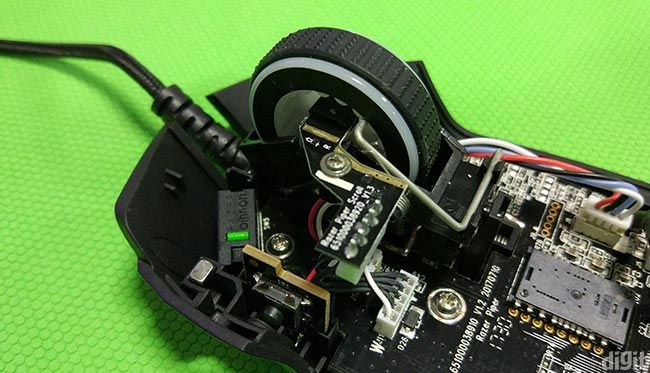 Razer has been bragging about the durability of their new micro-switches made with Omron, boasting a durability of 50 million clicks. This is the highest rating ever claimed by any mouse manufacturer in the market currently. Both the left and right click are based on these micro-switches. Usually, you’d find them placed parallel on the PCB but Razer has soldered the micro-switches diagonally. This was probably done to avoid increasing the PCB’s length just to accommodate the switches.

Using the same sensor on the Razer DeathAdder Elite, the Basilisk delivers a lower overall score in sensor performance compared to the Elite. Starting off with CPI deviation, it had a slightly average score and displayed small to medium deviation from the assigned CPI levels. The mouse has a low lift-off distance of around a thickness of one DVD so it’s less than 1.2 mm. There’s no option to increase or decrease your lift-off distance in the Synapse software.

The PMW3389 sensor on the Basilisk performed really well in the Enotus Mouse Test, scoring the highest on a thin cloth pad. Although it scored just above average on the Razer Goliathus Control mousepad, the overall score in Enotus was really high. This shows that the sensor has a smooth reporting rate and doesn’t easily lose tracking while in motion. Hence, this mouse can be used for competitive gaming. But the sensor suffers a lot of disturbance in MouseTester as seen in the graph below.

When moving at higher speeds, even though the mouse doesn’t lose tracking, it loses accuracy. Looking at the graphs, it can be easily seen that as the speed increases, the variance in the sensor frame rate increases to a great extent. Compared to the DeathAdder Elite, the variance is higher, so we are guessing this issue could be addressed with a firmware upgrade.

In real-world testing, we didn’t notice any sensor anomaly. There’s no positive or negative acceleration. Nor does the sensor display angle snapping at the lower CPI levels up to 3,200. Jitter only started off showing at higher CPI levels of above 6,000, but you won’t be able to use the mouse at such high levels anyway. 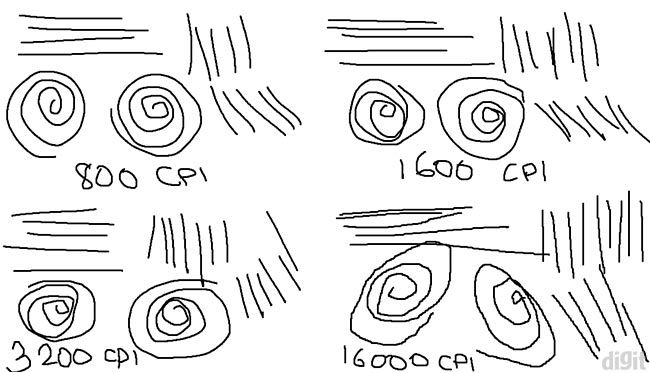