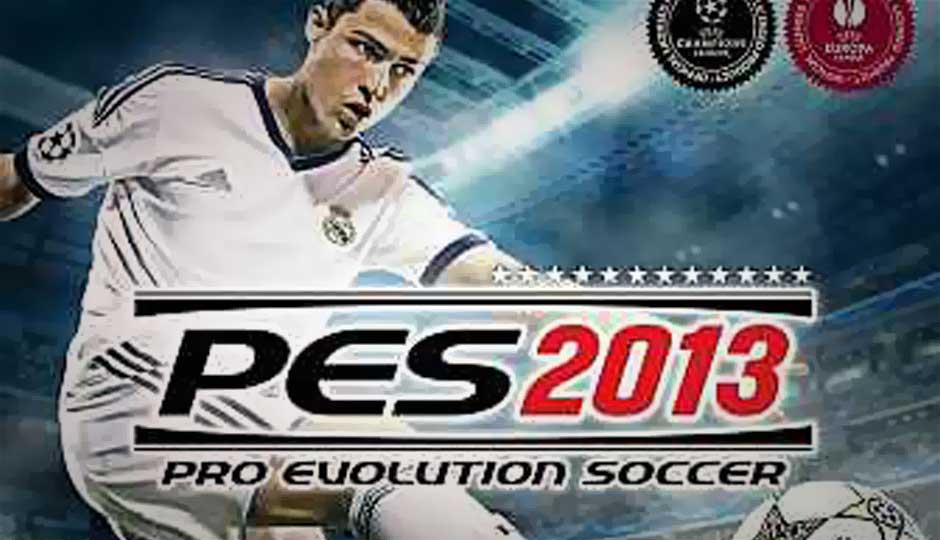 PES 2013 excels over FIFA 13 in one crucial aspect, considered by some the most important attribute in a football simulator game -- the on-field gameplay mechanics. A game played in PES 2013, after thorough training, is more dogged, more believable, and more satisfying than any FIFA 13 game you'll ever play. Despite all its shortcomings, and for the football fan undecided on their allegiance, thatï¿½s reason enough to give PES 2013 a try.

Pro Evolution Soccer is always bit of an enigma. While it’s perpetually hamstrung by lack of official licenses to deliver the kind of gloss and razzmatazz FIFA titles tout time and again, PES (Pro Evolution Soccer) games have always excelled where it mattered most (to purists at least): playing the game on the field.

A game of PES will deliver the kind of excitement that FIFA titles still try hard to emulate, but the football simulator game from Konami isn’t without its share of frustrating moments. And it follows a familiar script with FIFA 13 as well, full of highs and lows. 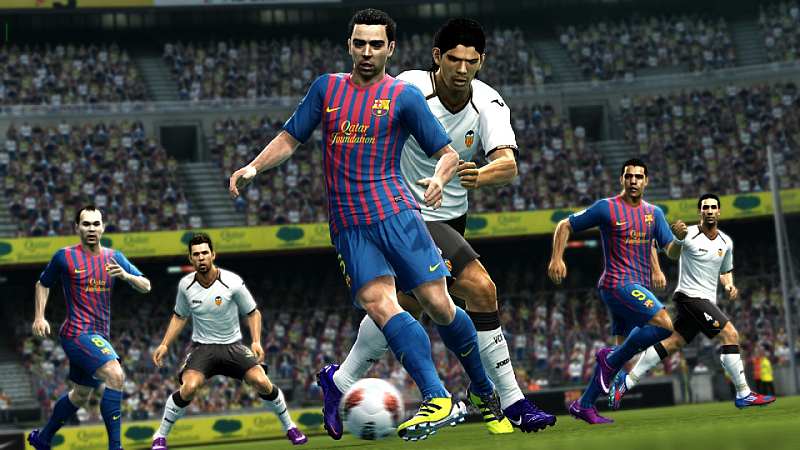 The new
Konami hasn’t changed the PES 2013 recipe all that much, as a result PES 2013 bears an overbearing resemblance to its predecessor. It’s both good and bad. The game, for instance, has a new training mode which takes newcomers and PES veterans alike on a journey of learning and practicing all the new moves introduced in the game. We recommend practicing the new skills and moves a lot to save yourself from a lot of frustrating moments while playing games or tournaments. And yes, the learning curve associated with mastering the new moves is definitely steeper, more challenging.

Player movements have been improved as well, albeit this is a subtle change. How players approach and react on and off the ball is better than ever before, and the ball physics is more realistic. PES 2013 sports a new defence system that’s difficult to master, but immensely satisfying at the same time -- it’s one of the reason why the game clicks. Compared to FIFA 13, PES 2013 imparts greater and finer control to the player in all aspects of on-the-pitch gameplay, and its visible in the defence. AI controlled movements are fewer, with PES introducing the Full Control and Deft Touch Dribbling, giving the players more control than ever. 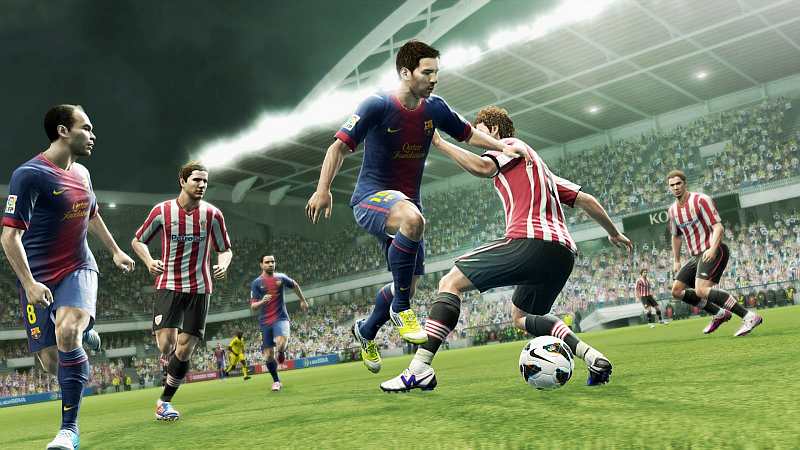 PES Full Control lets you decide the direction, speed and angle of a shot without complicating the controller, while Deft Touch Dribbling lets you add finesse to a player’s on-the-ball movement. When they come off, both these features work beautifully and help transform PES 2013 to a whole new level -- but yes, if you don’t practice, you’ll be frustrated. The tempo of the game has slowed down in PES 2013 compared to PES 2012, and we welcome this tweak -- the slower pace adds to the atmosphere and suits the newer tactical aspect of gameplay better. Beating the goalie from open play isn’t easy and scoring a goal in PES 2013 is extremely satisfying, better than FIFA 13’s experience. 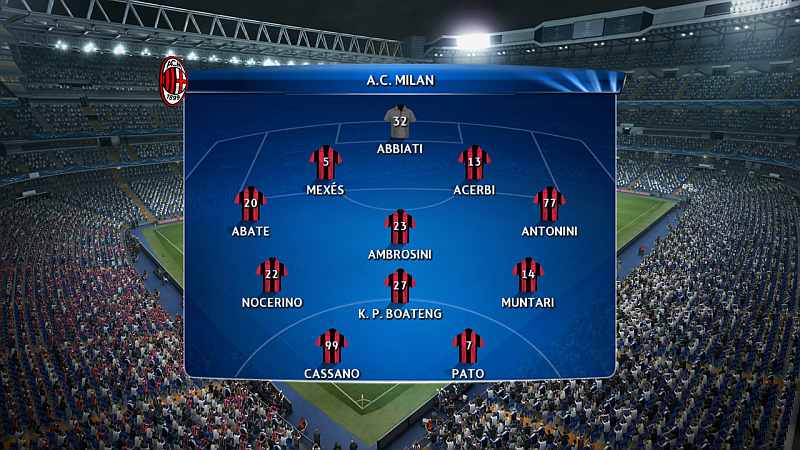 The old (or untouched)
Just like the new features elevate and add to PES 2013’s gameplay atmosphere, its unwillingness to address obvious shortcomings spoils the overall experience. PES 2013 has been unfortunate to not have official licences that EA’s FIFA 13 enjoys unrivalled, but that’s no reason to not evolve and change with the times. Player likenesses have improved a bit, but the commentary remains one of PES 2013’s lowest point, and it needs an immediate overhaul -- it doesn’t add to the gaming experience, only interrupts and irritates. While the presentation in FIFA 13 couldn’t be any sleeker, PES 2013’s menu and home screens look a bit dated. While it’s still great playing Become A Legend and PES’ Master League, we notice the advancement in their counterparts in FIFA 13 more visibly than in PES 2013. It would be nice to see Become A Legend and Master League get some attention from Konami so that’s tweaked appropriately and keeps pace with time.

The online multiplayer mode in PES 2013 is still identical to its predecessor except one change -- you can win items to modify a player’s stats in the offline Legend or Master League mode. While PES 2013 excels in offline single player mode better than ever, its online gameplay leaves a lot to be desired. 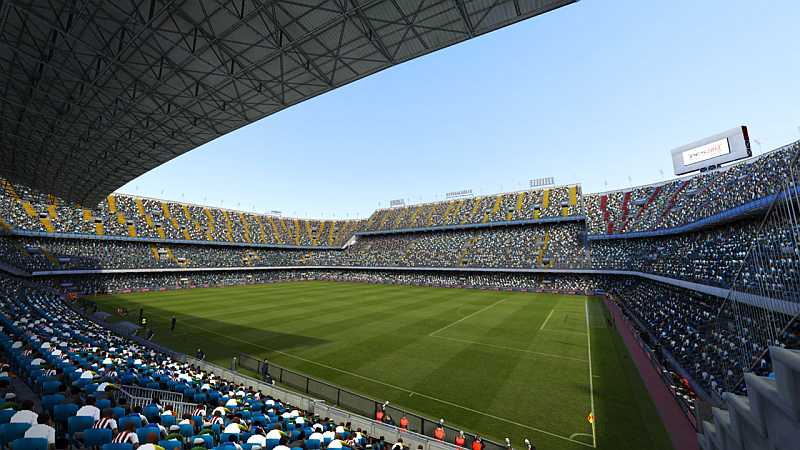 Verdict:
PES had the edge over FIFA several years ago, where the gulf between the two opposing titles wasn’t all that great. But where EA’s FIFA revamped and surged ahead with full steam, Konami’s PES has faltered, struggled to keep pace and lost valuable ground to its competitor. The result: FIFA 13 remains the better game as a complete entertainment package, mimicking on and off-field realism better than PES 2013.

However, PES 2013 excels over FIFA 13 in one crucial aspect, considered by some the most important attribute in a football simulator game -- the on-field gameplay mechanics. A game played in PES 2013, after thorough training, is more dogged, more believable, and more satisfying than any FIFA 13 game you’ll ever play. Despite all its shortcomings, and for the football fan undecided on their allegiance, that’s reason enough to give PES 2013 a try.

Tested on a PlayStation 3