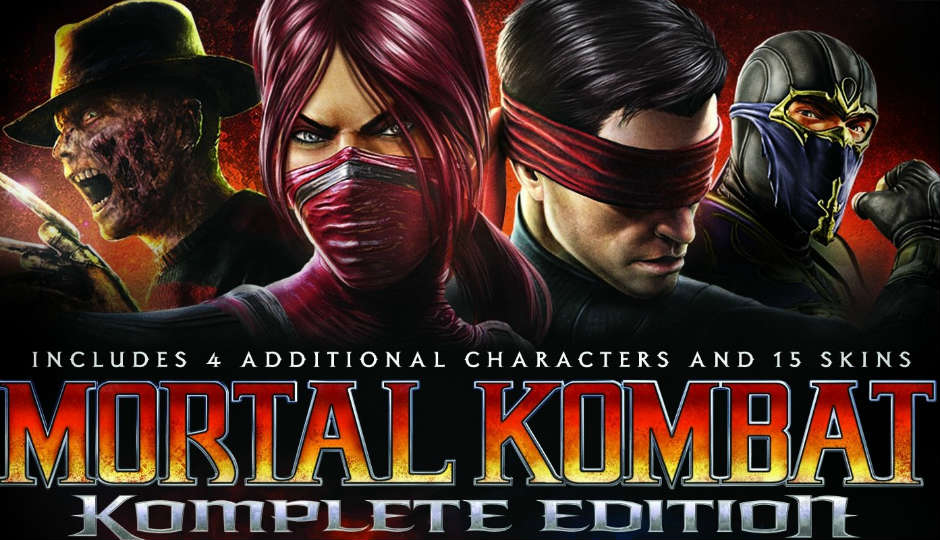 Mortal Kombat Komplete Edition delivers an action-packed single player experience through the use of its full feature length story mode. Since this is a fighting game, some people may find it repetitive at times but it should be noted that MK with its arcade style of play should be tried in multiplayer mode as it is a lot of fun when you have your buddies along with you for some bloody good time. The game has an online multiplayer ranked match system too, it adds much more depth to the gameplay and is thus a welcome addition. This game is a must try for all the fans of fighting games and we recommend it to gamers who are new to this category of games.

If you don’t know about Mortal Kombat then you might just be someone who has been hiding under a rock for a long-long time, and it’s high time you crawled out from under it. Well for starters, Mortal Kombat is a series of fighting games which has been around with us for quite a lot of time, that means this franchise is old (not older than its biggest competitor Street Fighter, of course, but still quite old). Nonetheless, Mortal Kombat is one of the few games which embody the fighting games genre in its true spirit. Mortal Kombat Komplete Edition is its newest installment and the words “Komplete Edition” mean that this version comes with four additional characters Skarlet, Kenshi, Rain, and the horrifying Freddy Krueger from The Nightmare On Elm Street series. It also has 15 skins and three Klassic Fatalities (Scorpion, Sub-Zero and Reptile) which are all DLCs for the game combined into a single package.

Sweater, check. Knife-glove, check. A face only a mother can love, check.

Story you ask? This is Mortal Kombat guys, it mostly relies on one-on-one combat to provide gamers with a fun experience, but yeah there is a story thrown in there somewhere as well. It picks up from where the game left off in Mortal Kombat: Armageddon, where the evil Shao Kahn was attacking the Thunder God Raiden in order to combine hell with Earth. Your mission is to fight the various fighters that come along your way, one by one, to reach Shao Kahn and obliterate him.

The game relies on tons of modes to make Mortal Kombat an engaging experience. Apart from the regular single player story mode, players have options to select various modes like 1 vs. 1 direct match versus the CPU, Tag Team, King of the Hill mode etc. When we started playing the game, we experienced some great combat first hand and the reason why we say this is because of the amount of work the developers have put into the game to improve the overall fighting aspect of the game for the players and this is visible right from the instant you get into your first fight. The controlling the characters feels spot on and does not ask for too much skill for regular or even special attacks. All the characters in the game have their slew of different special moves and each one of them is unique in their own way. Apart from kicks, punches, blocks, regular and special attacks, you also have combo techniques and boy, there are a lot of those. These combo attacks let you throw your enemies in the air and allow you to attack them for longer durations while they are mid-air or shoot a projectile of some sort at them to inflict more damage which of course depends on preset moves of the in-game characters. 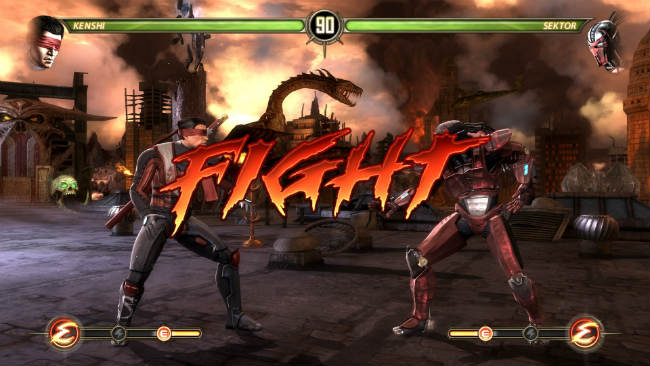 There is also something called the Super Meter which is basically like a special energy notification bar at the bottom of the screen for the game characters. This Super Meter fills itself when you perform multiple attacks or hits at a time. Once some points are accumulated in the Super Meter, you can then perform much more powerful combos. But when the bar is completely full, the game characters can do what the developers call X-ray moves. These X-Ray moves literally display a slow-motion sequence of the special attack in great detail and let you see an X-Ray vision of your enemies bones crack or see their organs getting squished in tremendous gory detail. You can use these X-Ray attacks and break bones in style or stab a knife in your enemies eyes and do all the various monstrosities you can possibly think of. The damage to the character is visible very well in form of blood, cuts, jabs and a whole lot of gore and while playing this game. 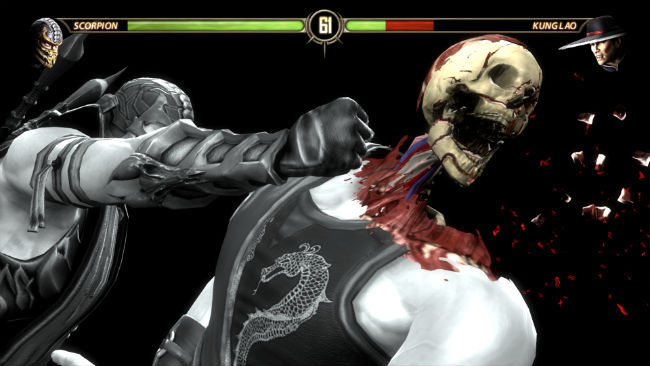 At least he didn't have to wait in line at a government hospital for his x-ray.

Defeating your online or offline opponents in the game gives you coins which you can later spend to purchase stuff from the “Krypt” (a graveyard where you unlock graves using coins and get stuff) or buy your way through the Challenge Tower in case you are stuck on any particular level. The in game environment can be used to stage fatalities for your enemies (think acid pots, lava drops, spikes et. al). But the best mode of all the modes in Mortal Kombat has to be the Challenge Tower mode which takes the game to a different level by adding or removing a few important gameplay elements that a player relies on. In Challenge Tower Mode, you will need to perform a series of challenges at every level- for example, one level may require you to use special combos that get displayed at the top of the screen in the stipulated amount of time to defeat your enemy and progress up the tower of opponents. Sometimes important abilities like blocking attacks will be turned off and you will have to figure out a way to beat your opponent by being strategic. The sad part about the game is that sometimes different moves don’t connect to each other seamlessly and it feels a bit slow because of a slight time delay between separate attacks but once you get used to it, you hardly notice it at all. 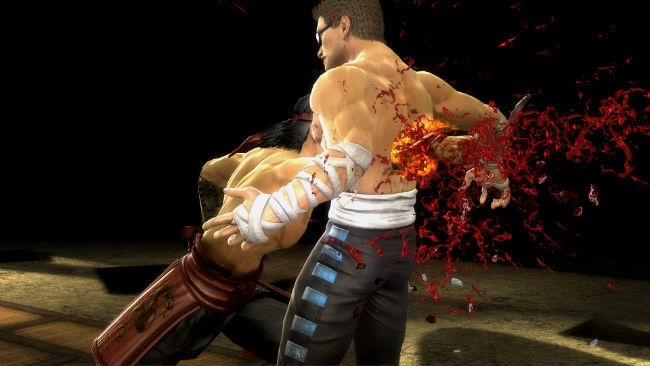 "That's what you deserve for wearing sunglasses indoors!"

Moves can be blocked, even X-Ray moves but it needs precision and skill from the players part. The game does not have a steep learning curve to it but since there are a buttload of special moves, combos, fatalities and babalities, you will need to learn these combos if you want to level up your game. Fatality finishing moves are something for which the MK franchise is famous for and this edition of the game has all the fatalities included which take gore on a whole new level with your enemy getting pummelled in some of the most gruesome ways possible.

Talking about the visual aspect of the game, we must say that the graphics are great. Character animation has been given special attention as every single character is intricately designed. Mortal Kombat Komplete Edition uses the Unreal Engine 3 and they’ve created a breathtaking game environment with a lot of thought put into each stage. Sound effects in the game are good too with easily discernible hack and slash sounds. But we found the game to be a bit dull in terms of the dialogues for characters as there is a very limited set of dialogues for each character and it becomes monotonous after some time.

In conclusion, Mortal Kombat Komplete Edition delivers an action-packed single player experience through the use of its full feature length story mode. Since this is a fighting game, some people may find it repetitive at times but it should be noted that MK with its arcade style of play should be tried in multiplayer mode as it is a lot of fun when you have your buddies along with you for some bloody good time. The game has an online multiplayer ranked match system too, it adds much more depth to the gameplay and is thus a welcome addition. This game is a must try for all the fans of fighting games and we recommend it to gamers who are new to this category of games.

We tested the game on our test rig that comprises of the following: