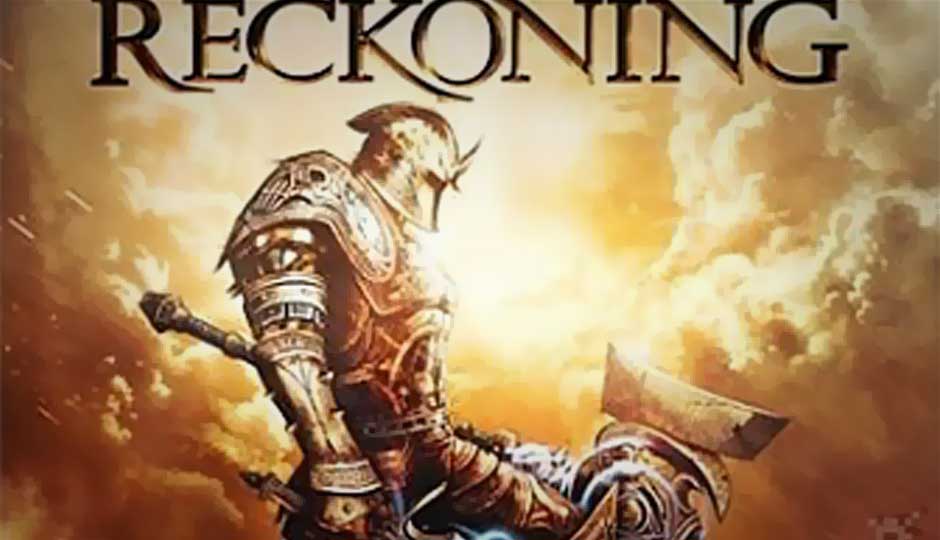 Overall, Kingdoms of Amalur: Reckoning is a fun game that is definitely worth a single play-through, if only to enjoy the myriad of weapons, powers and abilities on offer. After a certain level though, until a difficulty patch comes out, you might just start getting bored of your omnipotence ï¿½ and lose interest in progressing through the game. If the action part of an action-RPG is not your primary attraction ï¿½ stay away, KoA: Reckoning has nothing else except for combat.

Kingdoms of Amalur: Reckoning is a single-player action RPG set on the mythical world of Amalur, and limited to the Faelands – one of the kingdoms. KoA: Reckoning was jointly developed by 38 Studios and Big Huge Games, and published by EA Games. An MMORPG version of Kingdoms of Amalur is reportedly also in the works, and should open out the rest of the world to players, apart from bringing in player-to-player interaction.

Plot - 2.5/5
The game’s attempt at a high-fantasy story was written by R.A. Salvatore, a popular American science-fiction and fantasy author. The player, or protagonist dies before the game begins, and is resurrected in the first and only successful experiment at the Well of Souls. In the world of KoA: Reckoning, every individual fate is a thread tied into the tapestry of the world’s overall destiny – much like the Wheel of Time. By dying only to return, the protagonist no longer has a predetermined fate, making the character unique in creation, highly influential, and bearing the title, the “Fateless One.”

If players follow the main quest, what follows is the Fateless One’s journey to save the world (or at least the Faelands) from a fated defeat in the Crystal War, where the Tuatha Deohn, Winter Fae worshippers of false god Tirnoch and commanded by Gadflow, battle for domination against humans and elves, and the rest of the immortal Fae.

As a sci-fi/fantasy fan, I cannot help but feel the storyline of KoA: Reckoning was a little too pulpy to actually deliver a fresh take on any of the stereotypes common in the genre. As a pulp story however, the tale just about manages to not actually bore the hell of out the player. Pulp though, despite being known for its processed clichés, usually possesses a few redeeming qualities, at the least some strong humour, portent omens, well-crafted atmospherics, or visceral action – none of which feature strongly in KoA: Reckoning’s script.

Gameplay - 3/5
At the beginning of the game, the protagonist can choose from four playable races, two human (Almain and Varani), and two Elfin (Light Elves - Ljosalfar, and Dark Elves – Dokkalfar), each with different initial ‘skill bonuses’ – some better at stealth, others at mercantile, others at melee combat or persuasion. Non-selectable races include the Winter and Summer Fae, the Tuatha, and the Gnomes.

Skills are alchemy, blacksmithing, detect hidden, dispelling, mercantile, persuasion, sagecraft, and stealth, ranging from beginner to advanced to master. There are three ability trees, namely finesse, might and sorcery, and depending on how players invest in these, various destiny types will open up, namely Fateless One, Rogue, Mage, Fighter, Mage-Rogue, Fighter-Mage, Fighter-Rogue, and Jack of All Trades, each with their own classes depending on a player’s total XP and ability distribution. Players level up by investing in abilities and skills, with XP points awarded for combat, disarming traps, picking locks, and quest achievements. Players also earn fate points, which can be used in Reckoning mode for extra XP gain, with super-speed and extra-damage powers.

Each destiny type provides its own bonuses to the player, from such things as certain amount of inherent elemental resistance or increased stealth ability, to increased amount of gold drops and the ability ‘blink’-teleport instead of dodge. Players can reset their destinies using the services of a Fateweaver. Twists of Fate, unique player bonuses that are awarded at certain moments in quests, will also profoundly and permanently alter the player’s overall bonus distribution. 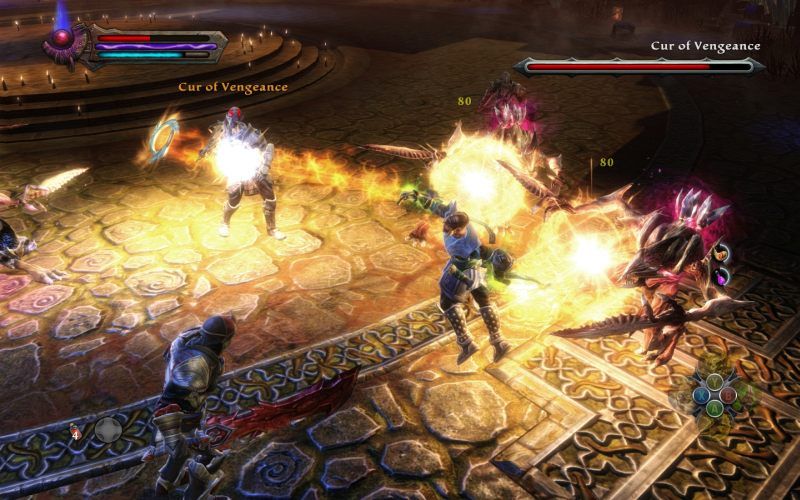 A lot has been made about the combat mechanics of Kingdoms of Amalur: Reckoning, something that is admittedly missing in the RPG genre. Games like Dragon Age or Torchlight feel clunky and unintuitive on the mouse and keyboard, and extremely unwieldy and limited on the Xbox 360 controller.

Much attention was given to ensure the combat mechanics of KoA: Reckoning were more easily accessible and satisfying, and the game makers have succeeded in making the action-RPG feel like a hack-and-slash. Don’t expect Devil May Cry-level of timing and direction perfection here though – players are not rewarded for their fraction-of-a-second attacks, evasion moves, parries or blocks – you’ll just end up getting hit.

Through the game, the player picks up a variety of weapons, with the rarer and more expensive ones replete with special abilities and bonuses, split across weapon types – chakrams, daggers, faeblades, greatswords, hammer, longbow, longsword, staff and sceptre. Each weapon will get various moves unlocked during the game, such as moves from block, charge moves, parry moves and dodge moves. Other abilities, across sorcery, might, and finesse, unlock powers such as Quake, Ice Barrage, Meteor, Lunge, Shadow Flare, Tempest, War Cry, Wrath, and Lightning Storm.

Just like weapons, plenty of armour is found through the game, as well as armour sets, usually earned at the end of quests – providing even greater bonuses than normal. Unfortunately, collecting items is not too easy – your inventory fills up quickly, and finding shops who stock backpacks (that augment your capacity) is very difficult. You can however, deposit items in stashes.

At the beginning of the game, even normal difficulty is quite difficult, with plenty of damage sustained, weak weapons, and lack of mobility. Things get very different once the main quest is over though, or roughly around Level 22, where hard mode is too easy – your weapons and powers deal too much damage, your constitution is very hardy, you have large total health and mana (for sorcery), and innumerable master-level potions.

This is when your relentless urge to try to level up dies out, and the game becomes a chore. At level 29 when writing this review, with evenly distributed Jack of All Trades ‘Prodigy’ abilities, I felt no need or burning desire to further upgrade my moves or abilities – I will face no foes that could trouble me – there will be no large number of enemies, or too many strong enemies together, appearing again. 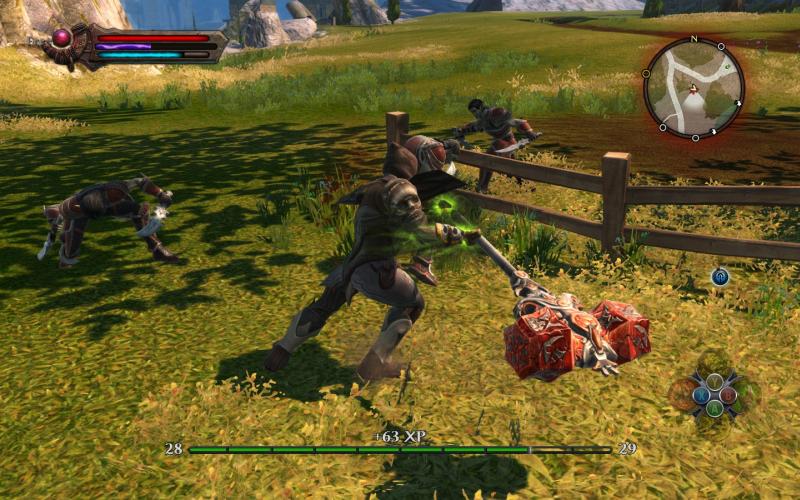 This is also where the game’s biggest flaw is – there is not much to do apart from combat, or stealth, which is admittedly good, but only for a while. The quests themselves are simple affairs, mostly just expect players to get from point A to point B, and kill all enemies on the way there, once you reach, and then on your way back to the quest giver. Running the long distances between checkpoints can get tedious, with no vehicle or horse in the game, only fast travel between major locations. Don’t expect any real puzzle-solving, or difficult search for items through the realm.

Another annoyingly missing feature is the ability to jump or climb, something we’ve gotten quite used to in hack-and-slash games, or action adventure games like Assassin’s Creed and Prototype. Player customization is good, with the character able to change costume/armour, hair styles and colours throughout the game. 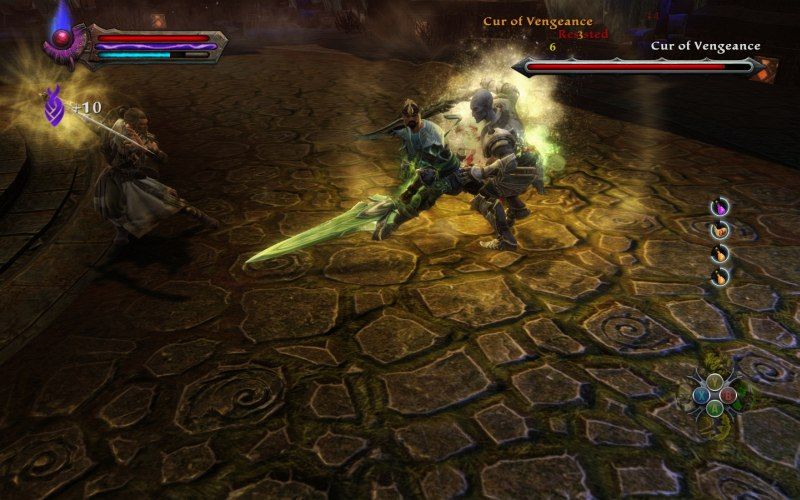 Graphics - 4/5
The game has very decent graphics, with realistic textures, and excellent animation effects. Weapon and sorcery effects are a sight to behold, with particle effects and motion trails, and in some cases, extra effects like ice, lightning, fire, and venom. I played the PC version, on a moderately powerful PC, and found it surprisingly well optimized – I got smooth frame rates above 100 fps, at maximum graphics settings. The game’s design is also quite good, with interesting landscapes, detailed character models, and lovingly detailed weapons and armour.

Sound – 3/5
The voice acting in the game is top-notch, as are the sound-effects, however, they are not accompanied with similarly well-composed music. The game’s Wagnerian classical style gets boring after a while, and becomes highly repetitive, even in some of the main quest’s major sequences.

Replay Value – 2.5/5
Unfortunately, Kingdoms of Amalur: Reckoning, gets boring after a while – finishing the game’s main quest is fine, however, there is almost no motivation to finish the side quests, even in order to level up higher and higher, unless of course, you want to just see the newly unlocked moves in action, or get all the armour of a set. None of which will actually be particularly useful, even in hard mode. There’s been talk of the developers releasing a difficulty patch to fix just this problem. Let us hope they do that.

Overall, playing the game again from scratch is something that I can’t imagine doing, however, it really depends on your playing style. You might want to try a different combination of abilities, or maybe play as another race, or gender. Certainly, the quests will not have enough interest to offer the second time around. 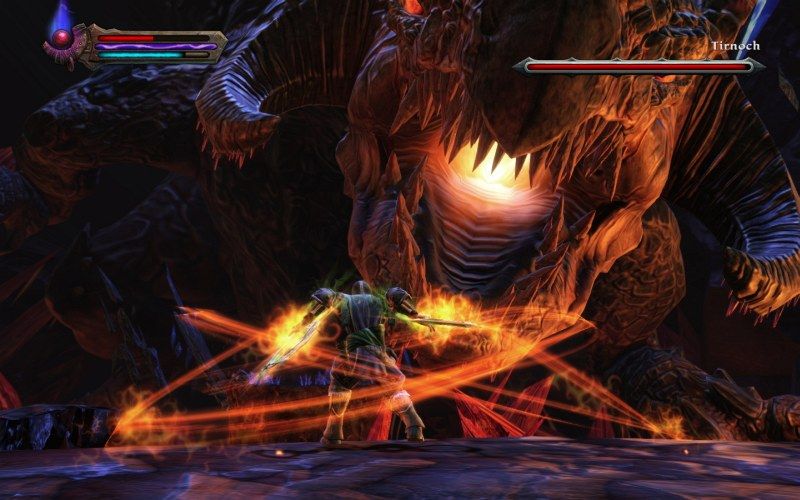 Verdict - 3.5/5
Overall, Kingdoms of Amalur: Reckoning is a fun game that is definitely worth a single play-through, if only to enjoy the myriad of weapons, powers and abilities on offer. After a certain level though, until a difficulty patch comes out, you might just start getting bored of your omnipotence – and lose interest in progressing through the game. If the action part of an action-RPG is not your primary attraction – stay away, KoA: Reckoning has nothing else except for combat.