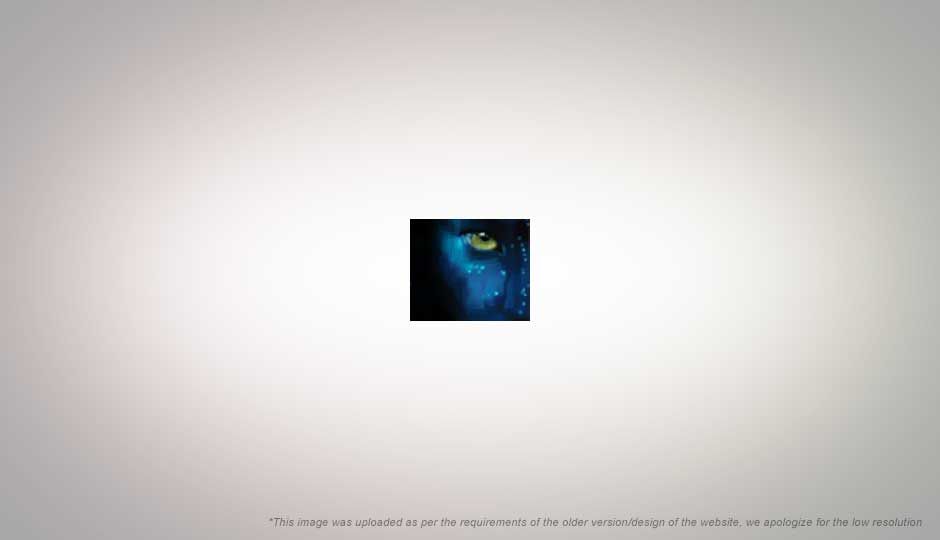 The game is still a commendable effort as it tries to give the player a lot of options. However, it does not stray from the tired mechanics of a typical third-person shooter and this overly cautious approach makes for a very ordinary game. I was actually expecting a lot worse from this game given the stigma one tends to have against movie based games. It would actually be nice to see Ubisoft Montreal (or some other studio) return to the world of Avatar. Only next time it would be nice to see them approach the game with a lot less creative conservatism and a lot of polish to smoothen the rough edges.

While Jame’s Cameron spent most of the last two decades working on his next magnum opus, Ubisoft Montreal decided to team up with Lightstorm Entertainment and bring stereoscopic 3D graphics to the small screen. Unfortunately, not having access to a display that is capable of delivering 3D graphics meant that the experience playing Avatar was not much different from any other third-person shooter. One thing that seemed to have worked in this game’s favor is the decision to develop the game independently from the movie storyline. Of course, the game is set in the same world as the movie and at least a couple of characters from the movie have reprised their roles in this game. However, the game’s story does not follow the exploits of Jake Sully from the movie; rather it explores the alien world of Pandora through the perspective of a code-breaker working for a private mining corporation called the RDA. 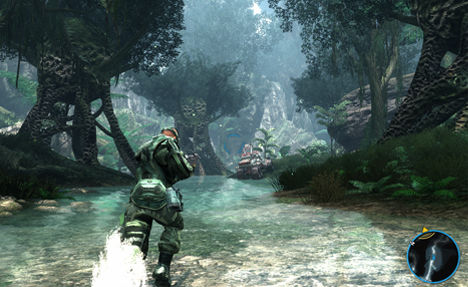 The games kicks-off by introducing the alien moon of Pandora and puts you in control of the game’s protagonist named Corporal Lance “Able” Ryder. After a brief sortie in the surrounding lands, the game picks up when Able Rider is initiated into the Avatar program.

Let me take a brief detour and skim through the premise of Avatar. After having discovered an alien world, the humans start aggressively mining the moon for a mineral called Unobtanium, which fetches a hefty price back home. However, Pandora has more than just deposits of minerals—the moon is lush with thick vegetation, sentient plants, animals and even sapient beings called the Na’vi. Even in the next millennium, humans have not given up on the idea that nicely asking someone to give up their freedom will work. So to facilitate diplomacy between the humans and the Na’vi, the humans start the Avatar program. This allows humans to remotely control human-Na’vi hybrid s that are ‘created’ by human scientists. Understandably, the Na’vi are not a big fan of the program and the relation between the two species is tenuous to begin with.
But these things have always failed to dampen man’s spirit for conflict and so, even all those millions of miles away what we have on Pandora is the all too familiar conflict for resources and territory.

Back to the game: pretty early on in the plot, the storyline forks into two. After the already very obvious intent of RDA is made even more obvious, Able Ryder gets the option to either continue with the RDA or to defect and join the indigenous resistance forces. Irrespective of which side you pick, they both share a common goal to locate and activate something called as a Well of Souls. Tapping into this allows communication and subsequently control over the entire ecosystem. The Na’vi believe that the moon’s life system is controlled by a single conscious being whom they refer to as Eywa. So whether you choose to play as Na’vi or as an RDA mercenary, the main objective of the game is to locate and activate the Well of Souls and then use its powers against your enemies. 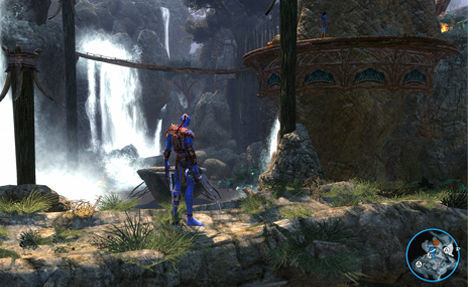 In spite of following the same plot, this choice in the game offers an incentive to beat the game twice over. Siding with either faction, the game still maintains common design elements like the skills, weapons and combat systems. There are subtle differences with the weapons and mounts, and there is at least one skill that is unique to one particular species. Strangely, despite these similarities and the seemingly superior constitution of the Na’vi, the RDA still come out as the stronger of the two sides. After playing the single-player campaign with both the species, I found that playing as the Na’vi has a steeper learning curve and up till the very end, the combat is substantially more challenging. 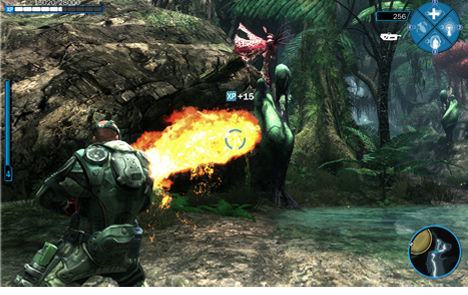 Towards destruction of your enemies, the game offers the Na’vi an assortment of weapons that predate history back home. As a Na’vi the game will offer you access to melee weapons like clubs, axes and dual-blades and ranged weapons like bows and crossbows. Just to keeps things a little respectable, you can also carry one piece of human technology in the form of a machinegun. Playing as an RDA operative, you will have access to a decent collection of weapons. Surprisingly, the human weapons’ technology has not changed much in over a thousand years and the arsenal is a disappointing collection of handguns, machineguns, shotguns and flamethrowers. The game could potentially have been a lot more fun when using vehicles (or mounts) in the game; especially the RDA vehicles. Unfortunately, the game’s abysmal flight and vehicle control system sucks all the fun out and I had actually started to dread game sequences where you were forced to use one of these.

Providing an additional layer to the game’s combat system is the skills system. Each of the two species has access to a set of skills that can be a life-saver on the battlefield. Now, even though there are overlying differences with the skills available to the two factions, most of them effectively perform the same functions.
Weapons, skills and armor upgraded are awarded each time your character levels-up. Experience points can be earned by killing enemies, completing primary and secondary objectives or by collecting additional information about the habitat. 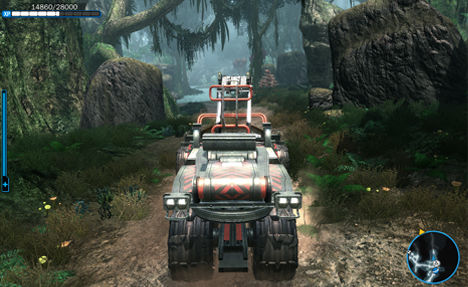 If the game’s combat system seems like a ho-hum experience, the storytelling does not help elevate the game from mediocrity. By contemporary standards, the voice acting is pretty weak and character animation during cut-scenes appears to be tacked on. Even the game world is not overtly imaginative as the landscape of Pandora looks like a spin-off of the Amazonian rainforest. Culturally, the Na’vi race comes- up as a blend of elves and the indigenous African tribes. Even stories— like this one about the plight of the Na’vi and the human aggression— can be found in numerous tomes in libraries throughout the world, as both works of fiction and historical documentation. Maybe the objective of the movie is to offer a visual treat and the uninspiring storyline is simply an excuse to do just that. Unfortunately with video games, eye-candy is not as effective in compensating for weak game-play, as it may be for making up for a weak plot in a movie. 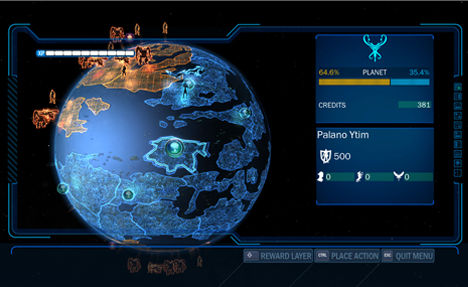 Providing a break from the drudgery of what is mostly a point-and-shoot combat system is another game-mode called Conquest. It is actually a built-in mini-game that can be triggered from certain points in the main game. Conquest plays in a war-room like interface with a 3-D layout of Pandora, along with position of enemy and friendly troops. The objective is to expand your factions control over the moon by capturing enemy territories, while at the same time defending and reinforcing territories under your control. This mode also ties in nicely with the regular game-play—capturing specific enemy territories rewards the player with various bonuses to defense and attacking capabilities. In turn, earning experience points in the single-player mode will add credits in the Conquest mode. Credits can be used to recruit additional forces or to reinforce a territory’s defenses. 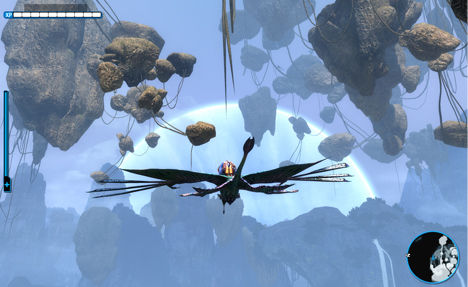 Avatar: The Game also has multiplayer support with customary game-modes like capture the flag, king of the hill and team deathmatch. Logging into the game servers requires an account registered with Ubisoft, along with the game’s product key. After logging in however, it was quite rare to find someone to match up with. Even using the server’s matchmaking service to join an existing match seldom threw up results. The best I could find, after several attempts at different times of the day, was a CTF match with no more than four players populating a relatively huge map.

The game is still a commendable effort as it tries to give the player a lot of options. However, it does not stray from the tired mechanics of a typical third-person shooter and this overly cautious approach makes for a very ordinary game. I was actually expecting a lot worse from this game given the stigma one tends to have against movie based games. It would actually be nice to see Ubisoft Montreal (or some other studio) return to the world of Avatar. Only next time it would be nice to see them approach the game with a lot less creative conservatism and a lot of polish to smoothen the rough edges.