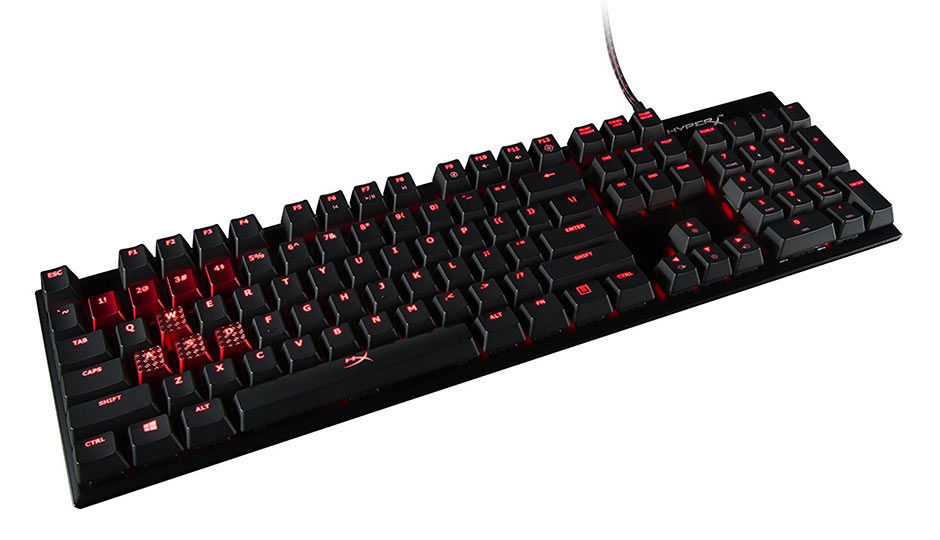 The HyperX Alloy FPS has all the basic features one would need for typing and gaming. The most interesting feature about the keyboard is its portability. The cable can be detached and stuffed inside a spongy-meshed pouch (shipped inside the box) along with the entire keyboard. This makes it a great piece of gear to take along if you’re a competitive gamer who prefers using the same peripheral every time. After the TVS Gold keyboard, the HyperX Alloy FPS becomes the second most affordable keyboard with genuine Cherry MX switches currently selling in India at around Rs. 8,999.

There’s not much to complain about the keyboard except the quality of the keycap stems. Poor moulding resulted in few keys getting stuck midway, but over time the edges will anyway grind away and smoothen out. If you’re looking forward to buying a mechanical keyboard for gaming, and prefer genuine Cherry MX Blue switches, then you should definitely consider the Alloy FPS. If the switch manufacturer isn’t a problem for you, then you can go with the Roccat Suora FX with knock-off Cherry switches (TTC Blue switches) and RGB lighting support, selling at a slightly higher price.

A compact design on a keyboard works out great if you are restricted with less space on your desk or want to carry it around with you. Conventionally, mechanical keyboards have been lacking in the portable department and we are observing a decrease in the footprint of mechanical keyboards. This trend retains the full size of the keyboard with standard 104 keys whereas far more compact keyboards like the tenkeyless or TKL keyboards are also available. The TKL keyboards drop the num pad and although it drastically reduces the length, some users can’t really work it out without it. 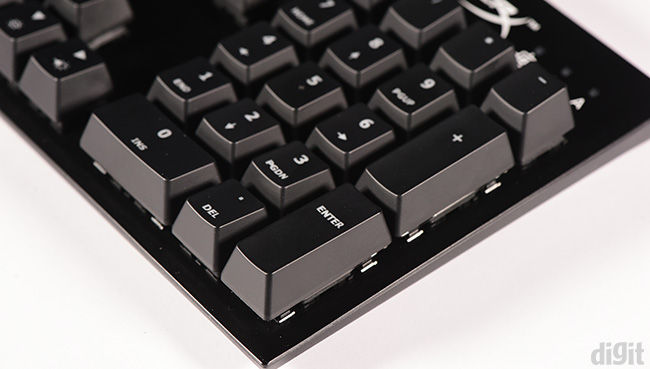 The key caps on mechanical keyboards used to be enclosed in a plastic casing on top. Nowadays, we are witnessing keyboards with an open design where there’s no enclosing and the mechanical switches are protruding and exposed. This further reduces the size of the chassis. Not only has the footprint of mechanical keyboards shrunk but their thickness has also gone down. Mechanical keyboards have found a high acceptance in the gaming community, especially with linear switches whereas there are many who would still prefer tactile switches in gaming. Theoretically, a lower actuation force will act as an advantage when it comes to gaming but it boils down to personal preference at the end. As a competitive gamer, you would want to carry your own gear to competitions and that’s whom HyperX is targeting with the Alloy FPS. 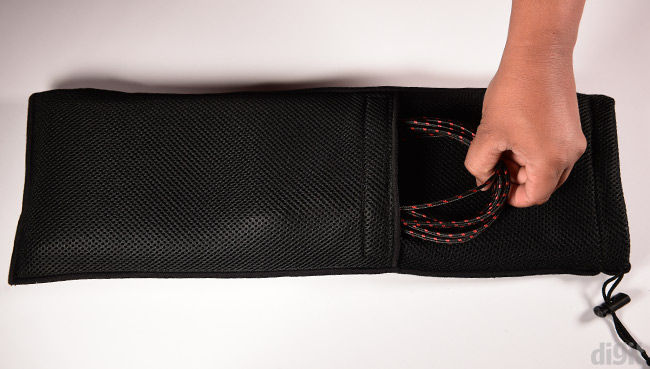 With interesting portability features such as a small frame and detachable cable, along with a carrying pouch, we'll have a closer look at the HyperX Alloy FPS. 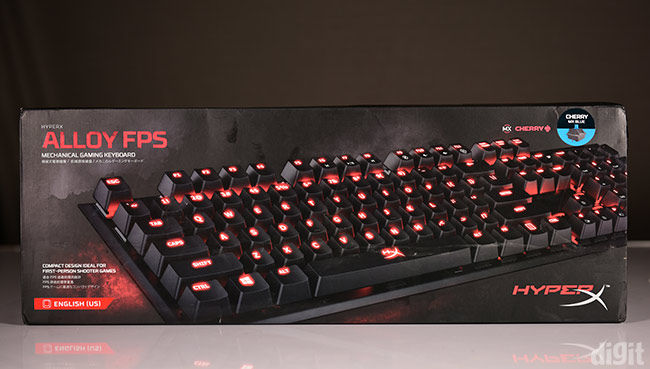 USB passthroughs are really useful when you quickly need to connect a pen drive rather than stretching yourself to reach your cabinet. They also serve as mobile charging ports and that’s only what you get on the HyperX Alloy. The USB port on the keyboard won’t let you transfer data and only let you charge your mobile devices. Although useful, it would have been better if the port was capable of connecting your pen drives or a mouse. The detachable cable is a necessary feature for gamers who prefer bringing their own gaming gear to the table. The cable connects to the keyboard using the mini-USB cable while there are two USB 2.0 connectors on the other end. Portability won’t be much of a problem because of the small footprint of the keyboard. The included carry pouch comfortably fits the keyboard. An attached sleeve on the carrying pouch can accommodate the cable as well. 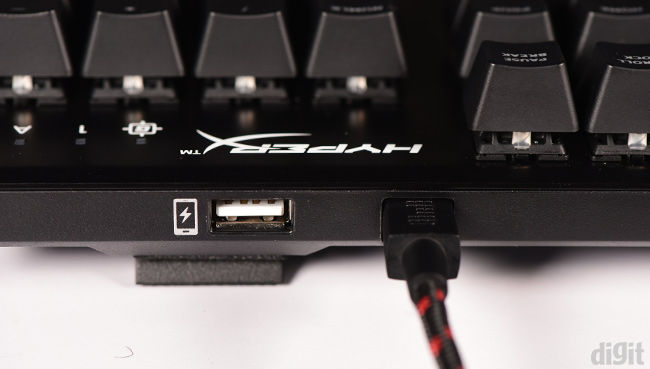 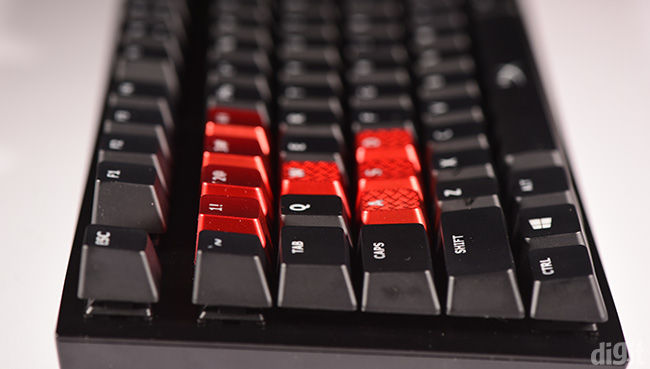 There are five lighting modes on the keyboard, all controlled using the Fn key in combination with the arrow keys. There’s also a Game mode that disables the Windows key to prevent accidental presses. Other accessories include extra keycaps and a key puller. The red and textured keycaps include the WASD and 1234 number keys only, as the keyboard is directed towards FPS gamers. The WASD keys have a textured surface because as a gamer, your fingers will be on them most of the time. The number keycaps are only red with no texture on them. The keycap puller is made of a regular plastic, making it easier to replace the extra keycaps and also when you plan to clean your keyboard. 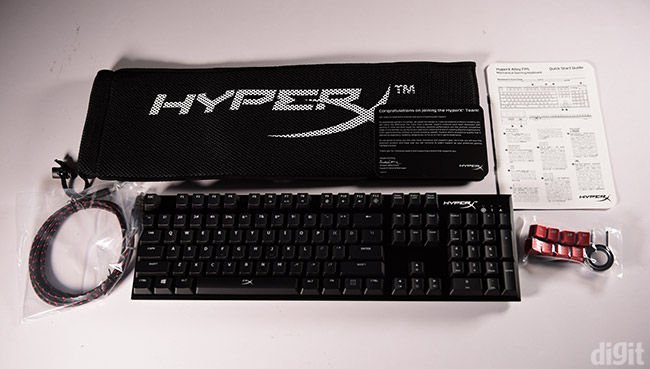 The Alloy FPS is a sturdy mechanical keyboard and shows no weakness in the main chassis. The steel frame on the top gives the entire chassis more rigidity, even though the thickness is lower compared to the Roccat Suora FX’s metal frame. The extendable standoffs on the bottom don’t elevate the keyboard to much of an extent and they are rigid as well. After a couple of days, the rubber feet attached on these standoffs came off, which was because of the poor quality of adhesive used. This wasn’t the case with the remaining rubber feet on the bottom plastic base. The detachable cable is flexible and braided, so you don’t really need to worry about damage while carrying it. The LED indicators for the game mode, caps lock, and num lock is placed on the top right corner of the keyboard, beside the HyperX logo. 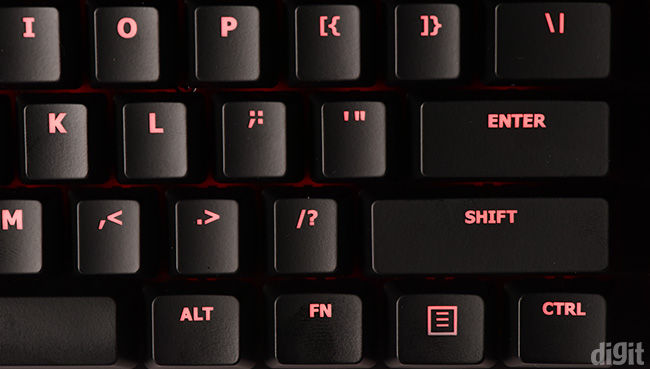 The keycap quality on the outside is fine with sharp laser etched fonts that allow the passage of sufficient light. The problem is the quality of the stems of the keycaps. On close inspection, we found that a couple of keycaps had bad moulding, resulting in the keys getting stuck midway in the switches. The density of the stems was observed to be lower compared to the keycaps on other keyboards such as the Corsair K70 RGB and G.SKILL Ripjaws KM780 RGB. The textured keycaps are great, especially the WASD keys. Having a detachable cable is certainly a great advantage. Although, when attached, the cable protrudes a little too much and a different approach could have been implemented. 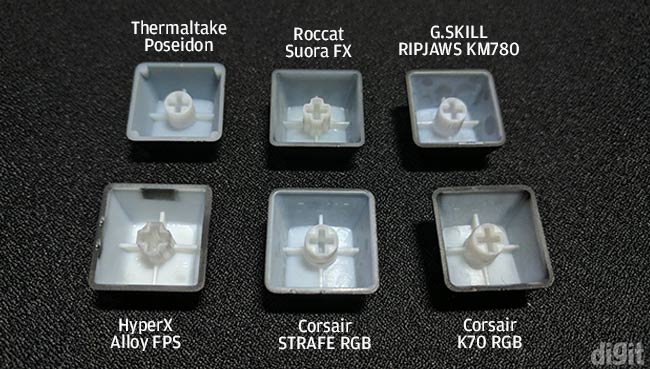 Ideally, when you’re gaming, you would want a low actuation force on the keys so that your fingers don’t require too much force to register a click. This eventually favours long hours of gaming by exerting lesser fatigue on your fingers. While this holds true in the ideal sense, personal preference also plays a huge role here. Membrane keyboards obviously require more force since you need to bottom out to register a key. This is not the case for mechanical keyboards since the actuation happens before you hit the bottom. Lower the actuation force, lower the stress required by you. Dedicated to FPS games, the keyboard would make sense to only sport Cherry MX Red or Speed switches. But, since it’s highly dependent on personal preference, the keyboard is available in Cherry MX Blue, Red and Brown variants. We played a few FPS titles on the keyboard including CS: GO, Saints Row IV, Just Cause 3, and a couple of RTS titles including Age of Empires: II and Total War: Warhammer. The textured WASD keycaps did help in distinguishing themselves from the rest of the keys. It would have been great if the number keys also had a textured coating rather than just the colour since it doesn’t give a functional advantage, but more of an aesthetic appeal. 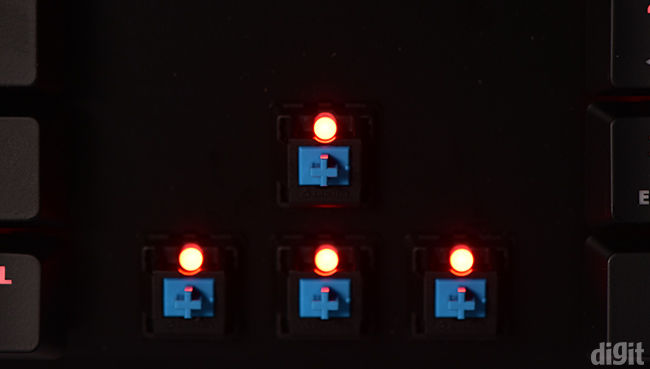 The Alloy FPS uses Cherry MX Blue switches which are wonderful for typing because of the clicky and tactile feedback. Compared to the Tt eSPORTS Poseidon Illuminated, which also has the Cherry MX Blue switches, the actuation force felt different and lower on the Poseidon. The bump on the actuation point felt more prominent on the Alloy. The design of the keycap stem is the same as seen on the Roccat Suora FX, but the difference in the colour shade denotes a different material (visible in the image above). We didn’t notice much of a difference in feedback when the keycaps were used interchangeably between the two keycaps. Although, the bounce back force or the force exerted by the switch after a press on the Alloy FPS seemed to be slightly more. These tiny nuances can be neglected, but if you’re particular about every minor detail, then you should keep them in mind.

The HyperX Alloy FPS has all the basic features one would need for typing and gaming. Backlighting is bright and different lighting modes and brightness levels are present as well. You get to switch between 6-key rollover and full n-key rollover, with 100% anti-ghosting. A USB port is present on the keyboard to charge your mobile devices. Do note, you won’t be able to transfer data through this port, essentially it isn’t a USB passthrough port. The most interesting feature about the keyboard is its portability. The cable can be detached and stuffed inside a spongy-meshed pouch (shipped inside the box) along with the entire keyboard. This makes it a great piece of gear to take along if you’re a competitive gamer who prefers using the same peripheral every time.

After the TVS Gold keyboard, the HyperX Alloy FPS becomes the second most affordable keyboard with genuine Cherry MX switches currently selling in India at around Rs. 8,999. The keyboard supports three Cherry MX variants – Red, Brown and Blue. In India, only the Cherry MX Blue variant is listed for now and we believe the other variants might pop up based on demand. There’s not much to complain about the keyboard except the quality of the keycap stems. Poor moulding resulted in few keys getting stuck midway, but over time the edges will anyway grind away and smoothen out.

If you’re looking forward to buying a mechanical keyboard for gaming, and prefer genuine Cherry MX Blue switches, then you should definitely consider the Alloy FPS. If the switch manufacturer isn’t a problem for you, then you can go with the Roccat Suora FX with TTC Blue switches selling at a slightly higher price, that we have already reviewed. They offer almost a similar tactile and clicky feeling as Cherry MX Blue. The main advantage of the Suora FX is RGB lighting support but the usage of knock off switches can be a deal breaker for many.