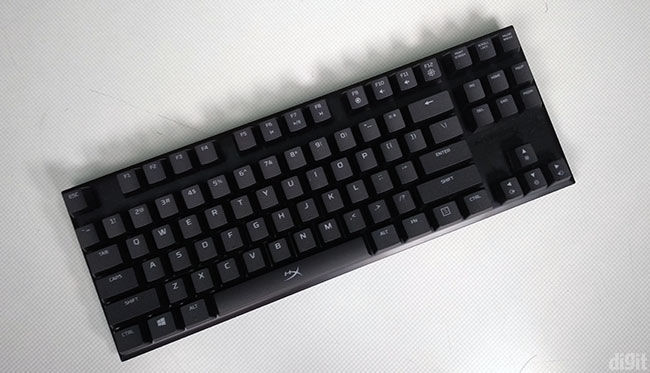 The HyperX Alloy FPS Pro is targeted for a niche audience who need a portable mechanical keyboard. It’s doesn’t have a numpad, the form factor is small and the cable is detachable. The absence of the numpad can straight away put off certain people who regularly use them. However, if most of your usage doesn’t require a numpad, and it’s mostly gaming, then you might prefer a smaller keyboard. The form factor is smaller compared to other mechanical keyboards, so it will take less space on your desk. The detachable cable is a luxurious feature required for portability. This exerts less strain on the cable when it’s being carried around. But they haven’t included a carry pouch as seen on the Alloy FPS.

We didn’t notice any compromise in build quality. The chassis has a metal frame on top that houses the switches. Keycap quality is the same as what we see on similarly priced keyboards. The keycap stem is dense enough not to wear out easily. With the introduction of a detachable cable, the risk of damage increases if you regularly keep on detaching the cable.

All the above-mentioned features are rare to find on any other mechanical keyboard. If you’re looking for these specific features on a gaming keyboard then the Pro is a solid choice to consider. However, if you don’t need a detachable cable and wouldn’t mind a slightly thicker keyboard, you should go for the Cooler Master MasterKeys Pro S. It has more features and almost the same build quality. However, it’s also difficult to find it listed online with appropriate prices.

Competitive gameplay doesn’t require most of the keys on your keyboard. If you’re into that sort of thing, you wouldn’t mind the absence of the numpad. The next level would be using gamepads but that would mean you won’t be able to use it for tasks other than gaming. This is where tenkeyless or TKL variants of keyboards form a middle-ground. Almost all the major manufacturers have released a TKL variant of their mechanical gaming keyboards. Another niche of games wants portability in their peripherals as well. They prefer a small form factor keyboard that can be stuffed inside a bag to be carried along to tournaments. Mechanical keyboards are generally bulky because of the extra weight of the metal plate and switches. However, not every TKL keyboard is portable. The HyperX Alloy FPS Pro caters to gamers with all these requirements. 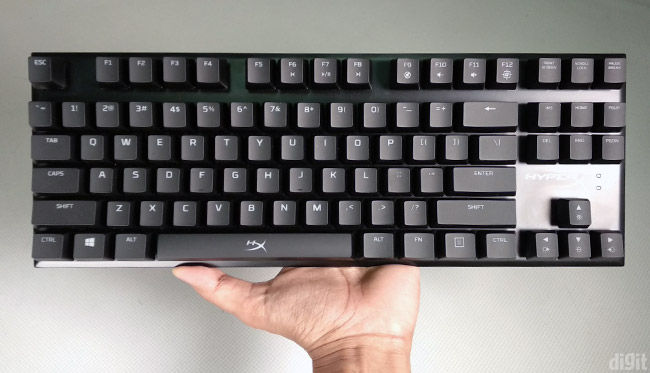 Certain peripheral manufacturers like Zowie and HyperX with products directed towards competitive gamers tend to skip the gimmicky features. They only pack the basic and necessary features. Hence, it’s difficult to find USB or audio pass-through ports or even software support. The same is the case with the Alloy FPS Pro. You’ll find full N-key rollover on this keyboard. This means that all your keys will be registered even if you’re simultaneously pressing multiple keys. Full multimedia control support is available through modifier keys. They can be accessed in combination with the Fn key. The switches are illuminated by monochromatic Red LEDs with per-key lighting. So, no RGB madness on this keyboard. There’s no software support, but the lighting can be controlled from the keyboard. This includes cycling through the different lighting effects and brightness levels. You’ll also get a Windows lock toggle. 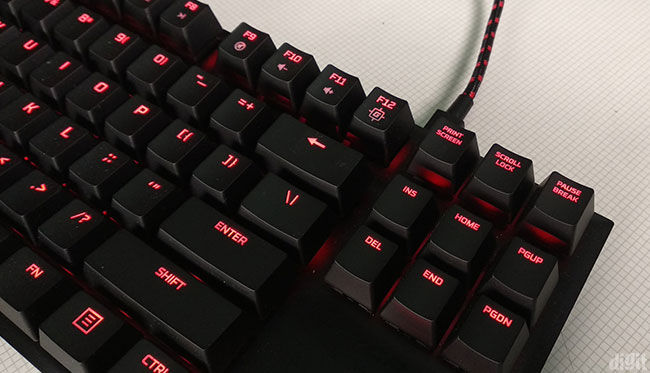 The HyperX Alloy series of keyboards packs genuine Cherry MX mechanical switches. Available in all the three variants of Red, Blue and Brown switches, we found only the Red variant listed online. The bigger variant, Alloy FPS, included extra textured keycaps in the package along with a keycap puller. But you don’t get these accessories on the Pro. The detachable cable is a wonderful feature. There’s no support for macro recording. This is a minor miss by HyperX since other keyboards implement on-the-fly macro recording without software support. 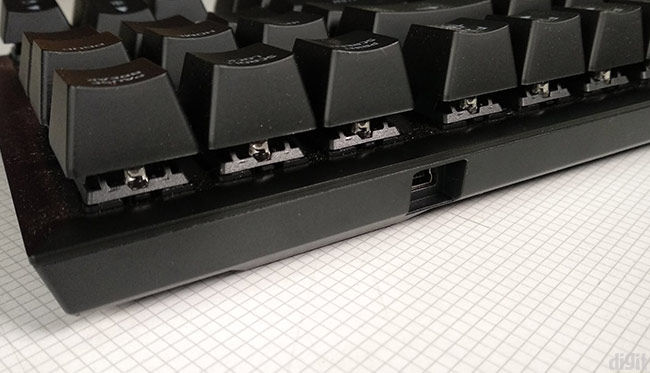 If you want a portable keyboard, you would also expect it to be sturdy enough to survive in your bag. The main chassis of the Pro is made of plastic with a steel frame on the top. This steel frame houses the Cherry MX mechanical switches right over the PCB. The frame is thick enough to prevent any flex. Since the cable can be detached, it poses a lower risk of damage when it’s inside your bag. The cable has a braided protective cover, so you can expect longer durability. Speaking of durability, the Cherry MX Red switches should last you for 50 million keystrokes. With proper care and regular cleaning, the switches should last you for up to a decade. The open switch design ensures that it’s easier to clean between the switches. Once the keycaps are removed, you can easily clean out the dust particles settled between the switches. 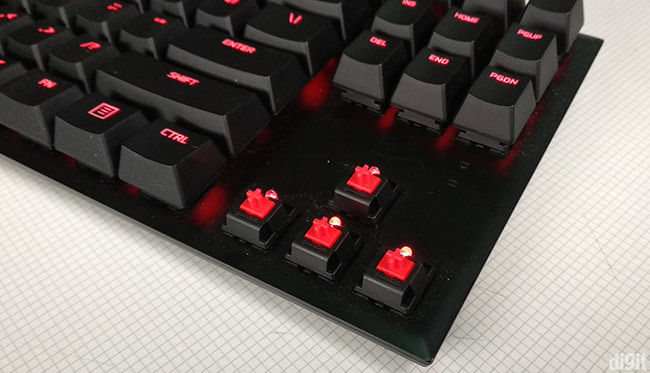 The keycaps are made of ABS plastic and the legends are laser etched. HyperX has continued the same neutral font on the keycaps. It’s subjective but the gamer-ish fonts usually tend to be ugly. Budget keyboards have started including double-shot injected keycaps. We certainly hope that bigger manufacturers also follow this trend. Their advantage is the longer durability of the legends on the keycaps. They tend to wear off in a few years on laser-etched keycaps. This way the keycaps might just end up lasting closer to the lifespan of the switches. The keycaps have a matte coating on them. Although they prevent fingerprints, oily fingers will still be a problem. On certain keyboards, we’ve found thin keycap stems that resulted in a bad experience while typing. The keycaps do have a wobble indicating a loose fit over the switches. However, they are tight enough not to pop out while typing or gaming. They still make a lot of noise even though these are Cherry MX Reds. 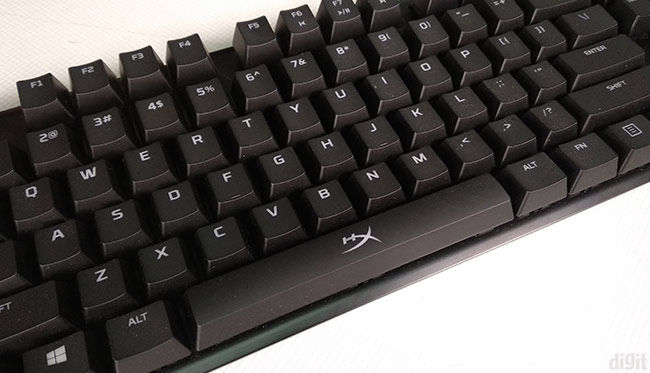 The absence of a numpad might not be the best choice for some users. This makes the keyboard smaller. Further, the chassis of the keyboard is thin comparatively. This design aesthetic is also present on the Alloy FPS. The edges of the chassis run really close to the keys which reduces the overall footprint of the keyboard. If you have space issues on your desk or table, the Pro will fit right in. The Alloy FPS has included extra keycaps and a keycap puller in the package. This is absent on the Pro and it’s a let down. Even if the extra keycaps aren’t that important, keycap pullers are necessary when you’re going to clean your keyboard. 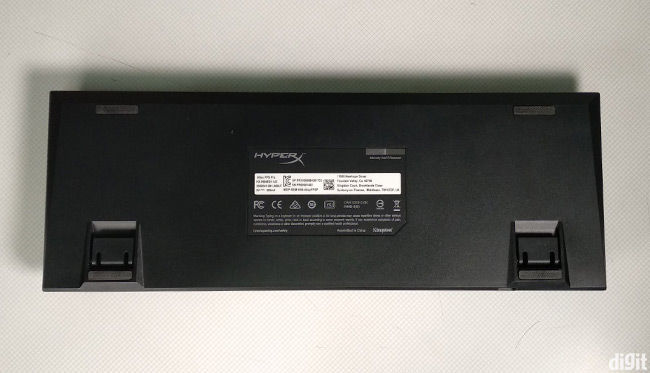 There are two plastic extendable feet on the bottom of the keyboard for elevation. Usually, manufacturers use rubber at the bottom portion of the feet to prevent slipping. On the Alloy FPS Pro, rubber strips are glued to the feet. And one of the strips came off after a few days of usage. Either a solid rubber piece or rubber lining could have been a better choice.

Generally, you would have a better gaming experience on mechanical switches with a lower actuation force and actuation point. The Cherry MX Red offers both. However, it’s all subjective to your preferences. The shape of the keycap stems don’t hinder with the switches, so you can expect a regular Red switch experience. Due to the absence of macro recording, it could be a deal breaker if you’re highly dependent on them. As we’ve been reiterating in most of our recent keyboard reviews, recent keyboards hardly display any anomaly. We use Switch Hitter to verify the rollover in keyboards. This software also displays if multiple presses are being registered by the switches. No such problems were found on the Pro. Nor do you need to worry about ghosting on this keyboard. 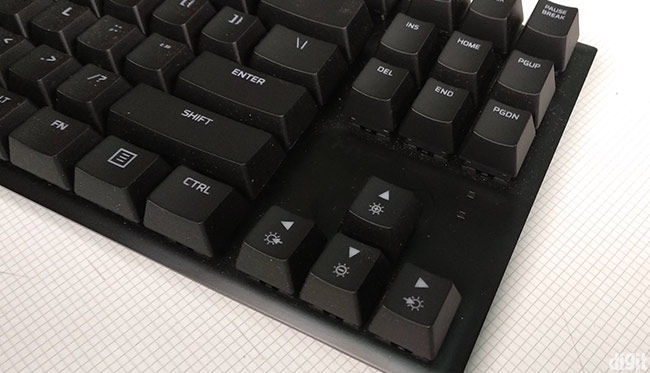 Typing performance is a subjective aspect since it’s tied to your preference of switches. Reds aren’t really the ideal switches for typing. Blues are directed for typing because of the tactile bump and higher actuation force. Because of the low actuation force, you might end up erroneously pushing the keys. Don’t expect any competitive advantage from the keyboard because of the absence of a numpad. Some users heavily use the numpad. So, if you’re one of them, you could look at the Alloy FPS. The Pro is said to be available in Blue switch variants but they aren’t listed as of writing this review.