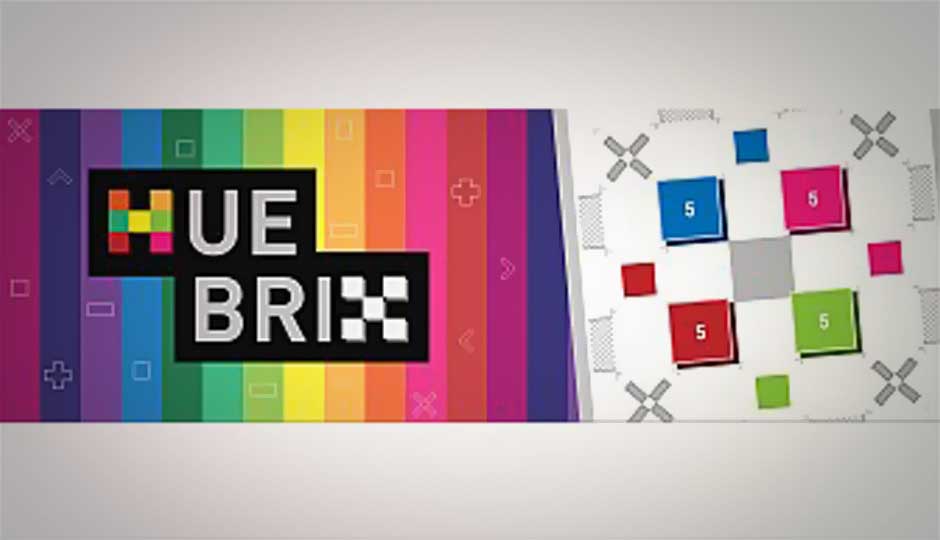 HueBrix proves that without flashy graphics and stellar audio, you can still have a great puzzle game whose strongest point is the gameplay. In short, a must play if you are a fan of puzzle games and like taxing your brain.

Puzzle games are dime a dozen all over the Google Play store and Apple’s App Store and it is easy to lose some of the good games amidst the popular big names such as Angry Birds, Amazing Alex, World of Goo, Cut the Rope and more.

Today we have with us a game, HueBrix, which is developed by an Indian company, Yellow Monkey Studios. Have they developed a puzzle game that can take on the big guns or is this one better left untouched? Read on to find out!

Gameplay
Simplicity is the name of the game. There is no real story to it and all you have to do is solve on puzzle to move to the next. As we have mentioned earlier, it is not necessarily the flashiest games that get all the attention but games that are innovative and have a fantastic gameplay.

HueBrix is a simple looking game. You have a grid with empty white blocks that need to be populated by the few coloured blocks placed at strategic points. There are numbers on top of the coloured blocks that represent as to how many empty blocks they can be dragged to cover. Drag all the coloured boxes to fill the empty spaces and you are ready to move on to the next level.

But this is easier said than done. The game starts out with a simple set of puzzles but it keeps getting tougher and more complicated as you move on. In the later puzzles you will scratch your head and spend quite some time going through the rigmarole of trial and error to figure out how to solve the puzzles.

The game adds elements such as roadblocks, portals that take you to the other end of the screen and certain block that increase or decrease the extending capacity of the coloured bricks. It is a nice mix of elements that varies the pace and difficulty of the game and the puzzles involved.

The only downside is that some of the puzzles in the later part of the game can get frustratingly tough. For those of you that succumb to the difficulty, there is a hint system. At the beginning of the game you have a limited number of hints but you can purchase more for $0.99 per pack.

Some of the later levels almost make you want to pull your hair out; especially when you finally figure out how to solve them and think “that's it! Why couldn't I think of that earlier?”

The controls of the game are as simple as simple can be. You just take your figure and drag the coloured brick. You can as easily retract your steps or simply reset the puzzle with a simple click.

Straight out of the box, the game has 100 levels, but HueBrix has another 300 levels available to purchase, segregated by skill level.

You start by selecting the dimension – number of blocks horizontally and vertically. Once that's done, you can get to create your own level with obstacles, portals so on and so forth. It is a nifty addition and surely adds value to the life of the game.

Graphics
HueBrix is one of the simplest looking games we have seen. It sort of reminds you of Snake on the good old Nokia 1100 and that isn’t necessarily a bad thing. Even though the look of the game is barebones, the gameplay more than makes up for it.

The coloured bricks are vibrant and the layout is simple. The menu system too is simplistic with one click navigation. Like it’s said, never judge a book by its cover and that hold true for this game.

Sound
The sound of the game is very retro reminding you of the good old 8-bit gaming days. With simple “plugs” and “plonks” every time you tap a key on the screen. It isn’t the best and we found ourselves turning the volume to mute in the first 15 minutes.

Verdict:
Well, now to the big question. Should you spend $1 or Rs. 55 on this game? If you are one who is intrigued by puzzle games and like to keep your brain active then it's a no brainer that you should pick this one up. The game offers you up to 400 levels plus the ability to make your own levels, which is quite awesome. The graphics of the game are very simple but that can be overlooked since the gameplay is so much fun. If you enjoy the classic retro gaming music, you may enjoy the sound too. We were better off with the game on mute.

HueBrix proves that without flashy graphics and stellar audio, you can still have a great puzzle game whose strongest point is the gameplay. In short, a must play if you are a fan of puzzle games and like taxing your brain.