In the first game, he was a Spartan that rose to the ranks of Gods and in the second game he was a God fallen from his grace. Now in the third and supposedly the final chapter, Kratos is a vengeful spirit with the single objective of destroying Mount Olympus and killing the king of Gods, Zeus. God of War III is a final stand-off between the old Gods and the new, between the Titans and the Olympians. As one would imagine, the ensuing battle is spectacular, both in its scale and the destruction it causes. Santa Monica studio has not introduced anything significantly new to the series with God of War III. They have taken all that we have already seen in the first two games and just made everything grander. 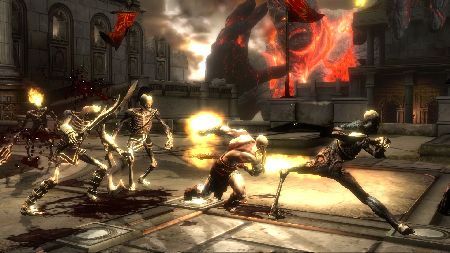 Just like God of War II, this game starts off with an epic battle and by the end of it Kratos is stripped of his powers and weapons. Without giving too much of the game away, the central objective from this point is to recover the Flames of Olympus that are said to have the power to kill a God and in this particular case, kill Zeus. Standing between Kratos and the Flames is a whole bevy of Olympian Gods and their minions. The Spartan deals with this in the only way he knows-- ripping them apart from limb to limb and bathing in their blood. 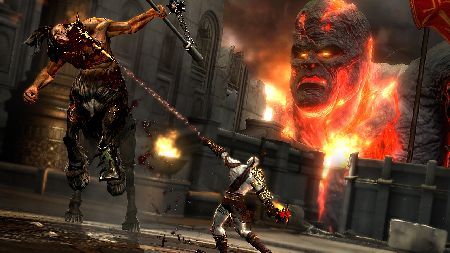 God of War III is one of the most violent and gruesome games I have played since Manhunt. Even the violence depicted in the first two games pales in comparison to what you will experience in God of War III. During the course of the game, I actually started disliking Kratos as he goes on a spree of mindless violence and killing everyone he encounters. I appreciate that this is a story about a God of War and violence is to be expected; however at the end of the day, there has to be something left to fight for. 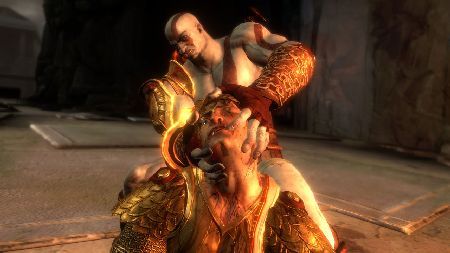 Accompanying Kratos in his bloody crusade is his trusty pair of Blades of Athena, now re-christened Blades of the Exile. Augmenting his destructive abilities are three other weapons, and all four weapons also have magic abilities attached to them. These magic abilities automatically upgrade along with the weapon. Kratos will also be able to carry Godly trophies like the Bow of Apollo, Hermes's Shoes and even the head of the Sun God Helios. Just like the weapons, the power of these items can be used in combat as well as to solve certain puzzles in the game. Familiar collectibles such as the Gorgon Eyes and Phoenix Features make a return, and once again they can be offered as sacrifice to increase Krato's health, magic and item-power pool. Kratos can also recover other relics of Gods throughout the game; however these can only be used during subsequent play-through. These items give the player incredible bonuses and essentially work as cheat codes. No wonder then that the game disables trophies for the entire duration of a play-through, even if you use any of these items only once. The developers have introduced some new things to the series, even though they maybe few and far in between. For instance, some of the QTE-based finishing moves are viewed from a first-person perspective. There are couple of other features like this one, but we do not want to spoil them for you. For the most part, this game retains its core-mechanics from the first two parts. Krato's primary blade has the familiar combos and all other weapons have similar keystrokes and effect. If things get really hairy, you can unleash magic contained within the weapons for some effective crowd control. Outside of combat it is still about platforming, shifting pillars, smashing objects and pulling switches and chains, to unlock the way forward. 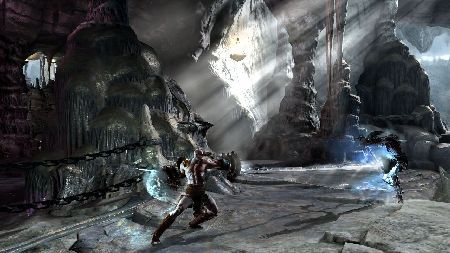 It took me about seven hours to beat God of War III on normal difficulty setting. After beating the game - true to God of War tradition - there is plenty of bonus content to get your hands on. The game unlocks bonus costume, the highest difficulty level, a challenge mode and lots of developer videos. All of the game's cinematics also become available in the video gallery. While you can pretty much get away with mindless button mashing throughout the game, the Challenge Mode will require some skills to beat. After beating the Challenge Mode, the game unlocks the Combat Arena. We are not sure about the nature of this Arena, but speculations on some of discussion boards indicate that this is where you can design your own challenges: to the extent that before the start of combat, you get to decide the type of enemy you wish to fight.

So, is this the game for you? If you are expecting all that was the God of War games on the Sony PlayStation 2, but at a much grander scale, then you should get your copy of the game immediately. The developers have been very careful not to mess too much with the game's core-mechanics, as new features are introduced only in small doses. God of War III is quite simply a relentless and an epic bloodbath from the start, right till the credits start rolling.