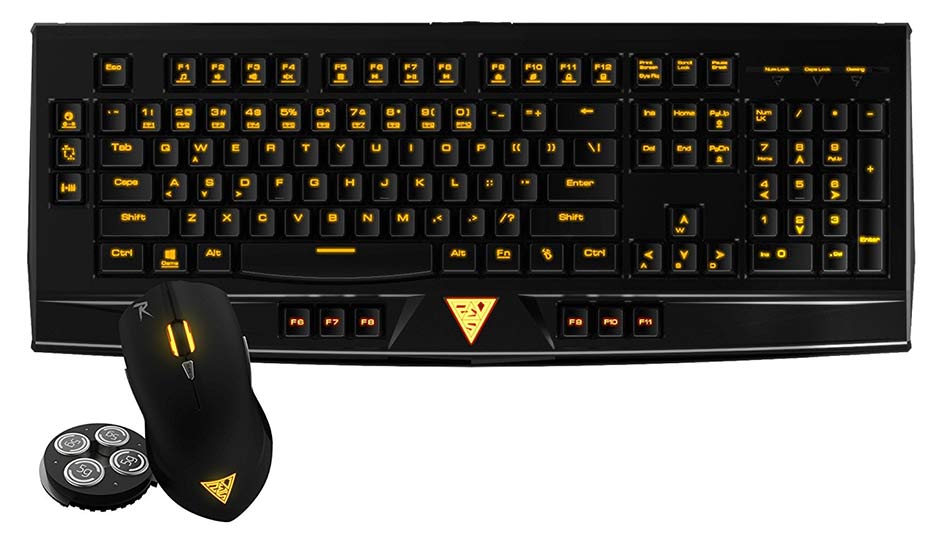 For a fresh gaming rig setup and with just an MRP of Rs. 3,000, the Gamdias Ares Essential Combo is the best budget keyboard/mouse bundle you can buy. The keyboard won’t be able to give you mechanical feel offered by the Devastator II but if the key switch type isn’t a concern then you won’t have any problem. The Gamdias Ourea mouse (sensor) performs better than the Devastator II mouse by 30%. This way the Gamdias Ares Essential achieves a higher overall score for the combo. Hence, we would recommend this combo over the Cooler Master Devastator II.

There are many options in the budget keyboard/mouse bundles out there. Even though the keyboards are average, it’s difficult to find a good enough mouse in these combos. We have tested only a couple of bundles before (with our updated test process), essentially Cooler Master’s Devastator II and MasterKeys Lite L Combo RGB. Both the keyboards had Cooler Master’s unique mem-chanical switches that are hybrid switches. They are membrane keyboards that give you the mechanical feel due to the unique switch design. It’s been some time since the hybrid and mechanical types of keyboards have taken over the market, reducing the share of membrane keyboards. You will find them in the lower end of the budget nowadays unless they are laden with RGB lighting and other extra features. The Gamdias Ares Essential combo includes a membrane keyboard and the mouse with RGB support selling at only Rs. 3,000. If you’re already excited to own the combo, then here’s a detailed review to make your buying decision a little easier. 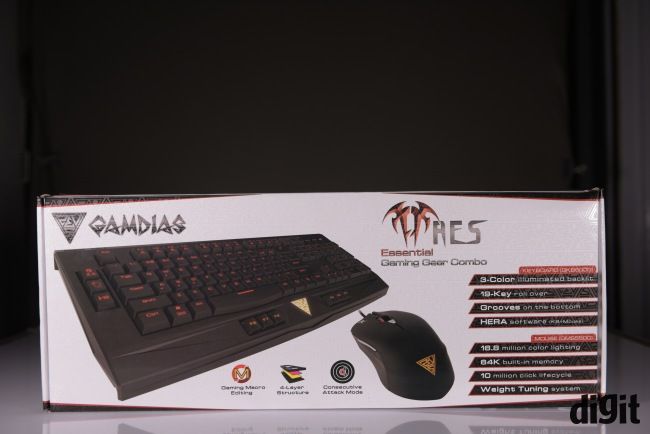 The combo isn’t feature rich but software support is great at this price, even though the software only lets you tinker around with the mouse. The keyboard lights up in three colours – red, yellow and green – that can be cycled through the extra key on the left side. There are only two lighting modes including a solid and breathing effect. There are several grooves at the bottom of the chassis to manage the keyboard cable and hide them out of sight. Apart from that, you have a 19-key rollover present on the keyboard.

The Ourea mouse supports RGB lighting but only in the scroll wheel. Everything can be controlled from the Hera software including macros, key assignment, lighting, DPI levels, etc. The mouse is capable of supporting up to 2500 but our tests revealed a higher value that we will be talking in the performance section. 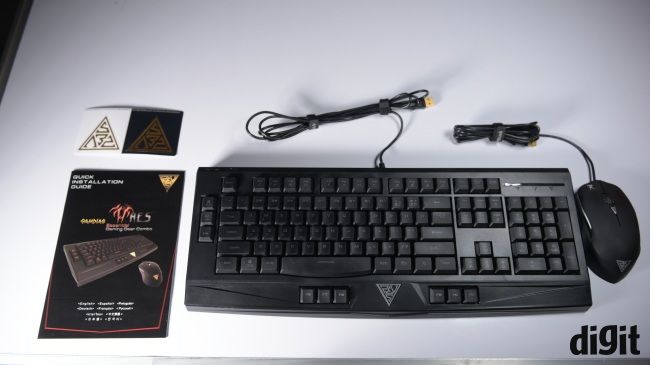 The Gamdias Ares Essential keyboard’s chassis is made of plastic with a brushed texture so fingerprints won’t be a problem. The cable is made with a soft plastic coating. The keycaps are average and since the lighting underneath isn’t dedicated to every individual key, the backlighting isn’t bright enough. Nor is it uniform and hence at an angle, the brightness reduces. The fonts on the keycaps aren’t clear enough to diffuse the light that further reduces the brightness. The keys are silent and the only noise generated is the rattling of the keycaps. Out of the three LED colours, red is hardly visible. 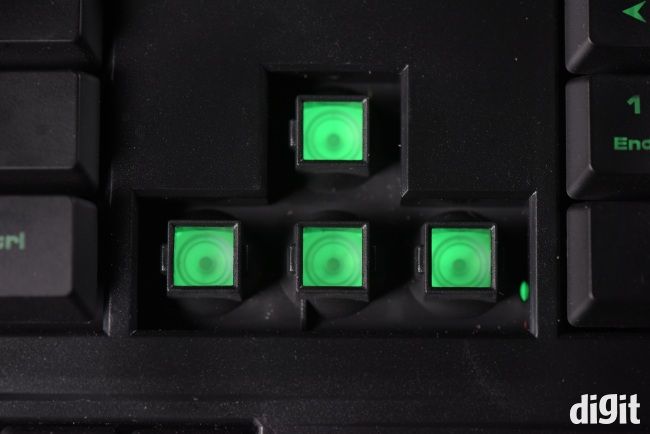 The Ourea has a matte coating over the entire body except the left and right sides. There’s no sensor rattle and only the scroll wheel is the loose component. All the switches on the Ourea are Huano switches including the right, left, scroll wheel, DPI and forward and backward buttons. There are Huano blue point switches for the right and left clicks that have a durability of 10 million clicks. Essentially they should serve you really well in the long run. The same Huano switches are also found on different Zowie mice. We haven’t seen adjustable weights at such a low price segment and it’s always better to be able to remove them according to your use-case or game genre. 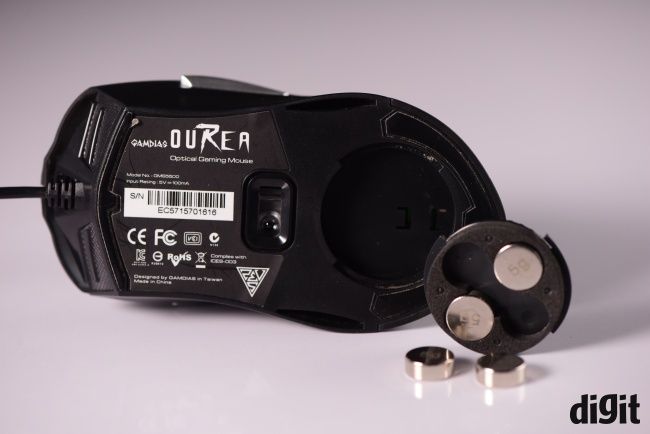 The Gamdias Ares Essential has a normal rectangular design. There’s a fancy palm rest at the bottom that also houses the six function keys. It would have better if they had added extra macro keys rather than the same function keys from F6 to F11. They perform the same functions and can’t be individually reassigned with a different function using the software. Hence, they are completely useless in a gaming scenario, other than the ease of reachability. The three keys on the left side are assigned different functions which could have been easily a secondary function or modifier key using the Fn key in combination. These keys could have been used as dedicated macro keys instead. The bottom of the keyboard has many grooves to route your cable as you wish from the four corners, something we don’t see in keyboards at this range. The Ourea is an ambidextrous mouse but with a different approach to the forward and backward buttons. Conventionally, both these buttons are placed on one side. On the Ourea, there's only one button on each side. This means that by default, the button on the left side of the mouse is assigned the backward function whereas the right side button is assigned the forward function. It was a little difficult to get used to it, and there were several times where we accidentally clicked on the forward button. This non-conventional approach might not be welcome by some users. The prominent bump and steep slope at the bottom makes claw grip really comfortable and palm grip users might not feel comfortable after a few hours. RGB lighting is only restricted to the LED near the scroll wheel while the Gamdias logo doesn’t change colour. 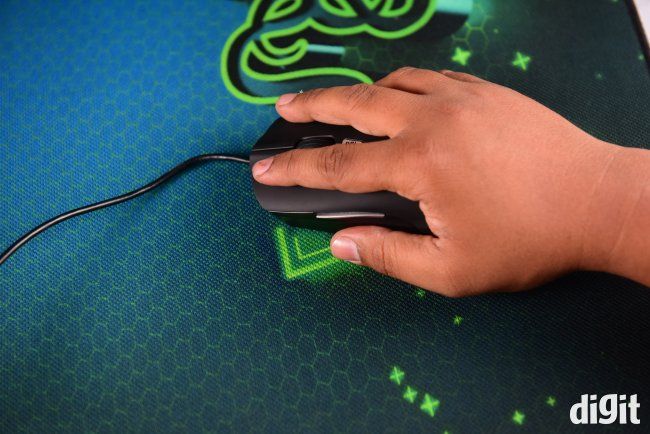 The software was ridden with bugs earlier when we had tested the Gamdias Zeus P1 RGB in our gaming mice comparison test. Software updates have become frequent and now it’s quite stable. It’s easy to assign and record macros, change the DPI and control the lighting on the mouse. Although the keyboard does get detected in the software, you’ll only get to play around with the macros and not the lighting. 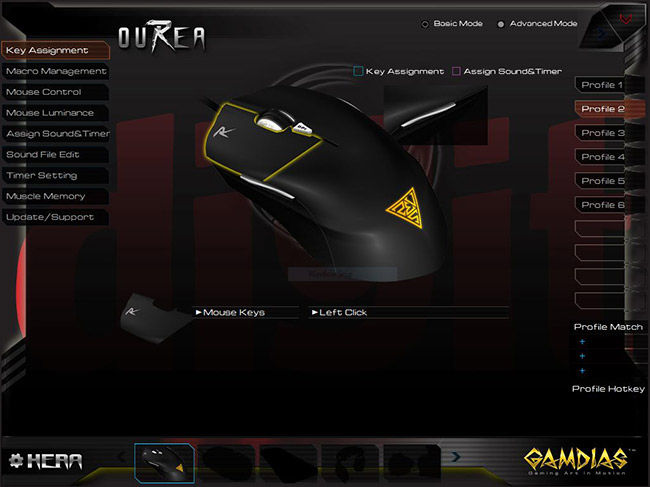 You can save six different profiles on the 64KB onboard memory of the Ourea but due to the lack of a dedicated or an extra key on the mouse, it can’t be changed on the fly. You need to manually change the profiles from the software, making the entire idea of quickly switching between profiles a little tedious. DPI levels can be adjusted through steps of 100 starting from 200 up to 2500 in the software.

It’s been ages since we’ve used a membrane keyboard since almost all our keyboards in the test labs are mechanical. Even though hybrid keyboards feel close to membrane ones, it was refreshing to get back to the prominent mushy feeling. The keyboard was silent compared to its mechanical and hybrid variants. The only noise generated was from the keycaps as they didn’t have a snug fit. The elevation isn’t much but this is a subjective aspect that does affect the typing performance in users. Another subjective aspect that we didn’t like was the absence of the curvature over the keycaps. The curvature makes it easier to reach the top level of keys from the bottom, essentially making it comfortable to type. 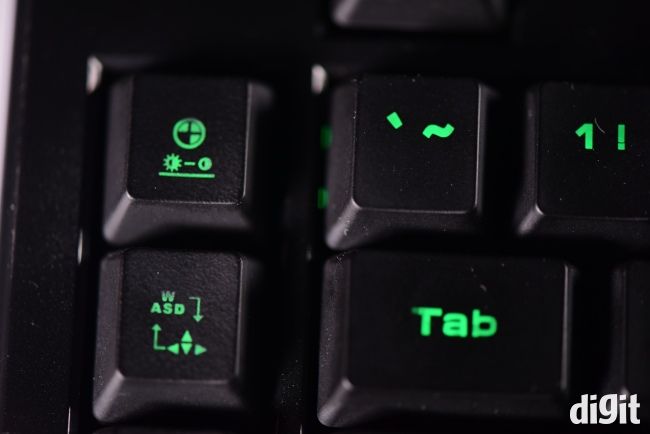 We didn’t notice any discomfort in typing for longer hours. The Ares Essential was tested for gaming and typing for a couple of days. In typeracer, we achieved a maximum typing speed of 79 words per minute which is quite close to the scores in mechanical keyboards. An average of 73 words per minute was achieved along with an average accuracy of 94%. Compared to other keyboards, this is a great score since it’s nearly the same as the scores achieved by mechanical keyboards. There were no issues observed in gaming as well, none of the keys failed to register even with multiple taps. For casual gaming, this is certainly a great keyboard but for competitive gaming, gamers might prefer something with lower actuation forcea nd key travel. 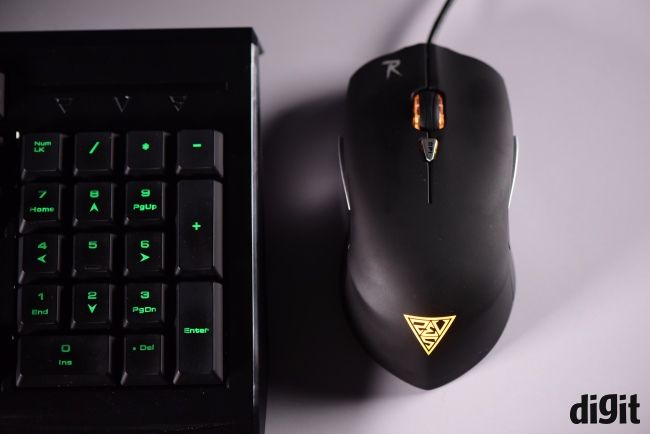 Initial calibration displayed an error of around 200 in true CPI levels determined through MouseTester. Our mouse tests primarily involve two CPI levels – 800 and 1600. Mice with support for higher CPI levels are subjected to the same tests at 3200 CPI as well. Hence, we had to lower the CPI levels to 600 and 1400 in the software to reflect 800 and 1600 respectively. The mouse is said to support a maximum of 2500 CPI and we found the maximum CPI level to touch 3000. Such an error can be neglected if you aren’t really familiar with changes of around 200-300 CPI. Anything above that can be easily detected without software. To learn more about our mouse test process in detail, you can read about it here. 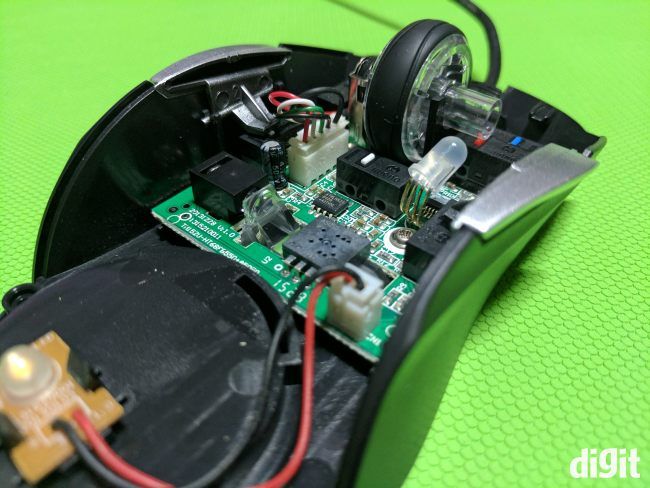 The A5050 sensor is known to spin out, also used in the ASUS Cerberus

The A5050 sensor on the Ourea mouse tends to spin out at low speeds. Spinning out has been observed in our earlier tests in the ASUS Cerberus and Cooler Master Devastator II mouse. At this price, we have observed this happen among the mice we've tested, the Cooler Master MasterMouse Lite S being an exception. The malfunction speed was somewhere close to 1m/s, where any flicks above that would result in the loss of tracking. This can be seen from the graphs generated in MouseTester below. 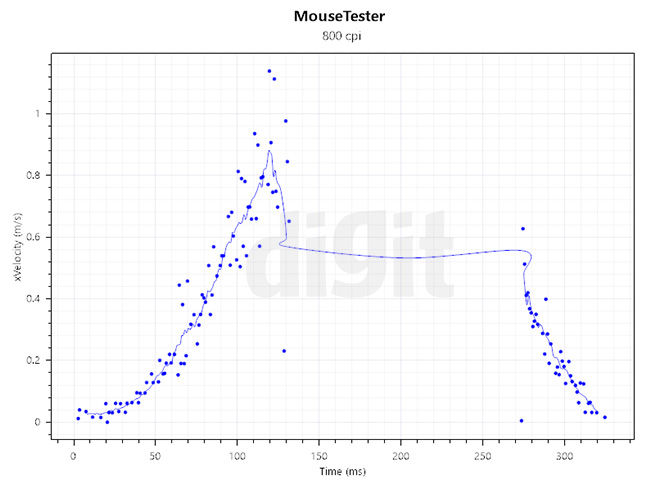 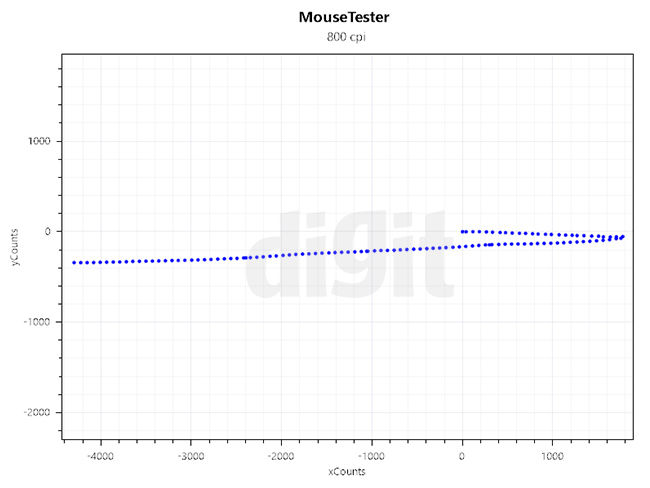 Acceleration detected in the A5050 sensor on the Gamdias Ourea 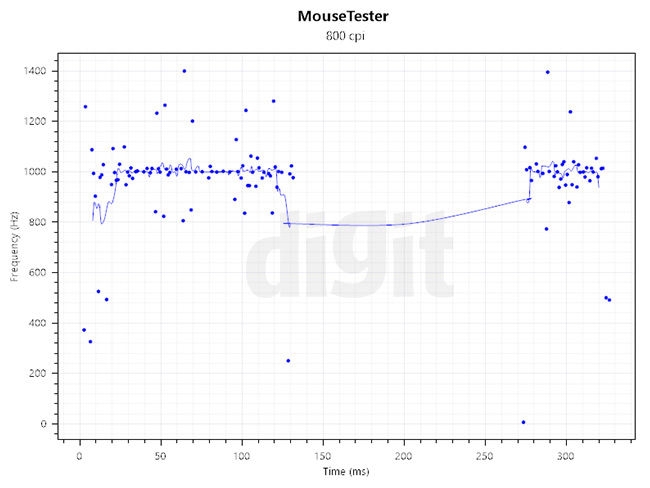 We comfortably played CS: GO and other FPS games with the Ourea, along with a couple of RTS games. Casual gaming wasn't a problem since we didn't experience jitter on any of the CPI levels. If you're a competitive player, then you should look somewhere else for a gaming mouse. 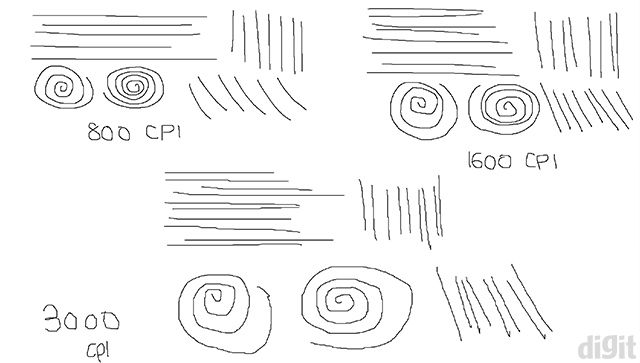 For a fresh gaming rig setup, the Gamdias Ares Essential Combo is the best budget keyboard/mouse bundle you can buy. This combo goes head to head against the Cooler Master Devastator II combo where the keyboard is almost the same in terms of typing and gaming performance. It has better lighting options but the stark difference is the switches underneath. The Ares Essential keyboard won’t be able to give you mechanical feel offered by the Devastator II through its mem-chanical switches. If the key switch type isn’t a concern then you won’t have any problem with the Ares Essential keyboard. 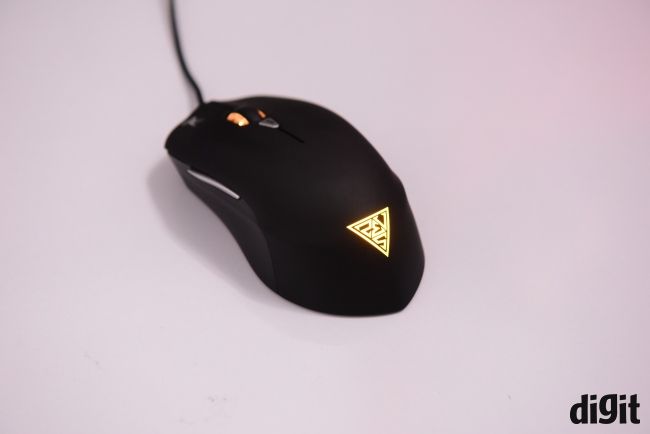 While the keyboard is almost the same in performance, the Gamdias Ourea mouse performs better than the Devastator II mouse by 30%. The Ourea and the ASUS Cerberus both use the same A5050 sensor, so they scored almost the same in our tests. The sensor does spin out with quick flicks, which should only be a concern if you play at low DPI levels of around 800. At higher DPI levels of say 1600, you won’t be flicking your mouse as fast, leaving no room for spinning out. Of course, it won’t serve you well in competitive gaming, but we were able to achieve first place in a quick CS: GO deathmatch.

With just an MRP of Rs. 3,000, the Gaming Ares Essential Combo is a great bundle if you are restricted to a tight budget. Do note, there are different models with the same name and the one we reviewed was the GKC6000. Although, you won’t get the mem-chanical switches, a better performing mouse is more important. Hence, we would recommend this combo over the Cooler Master Devastator II.