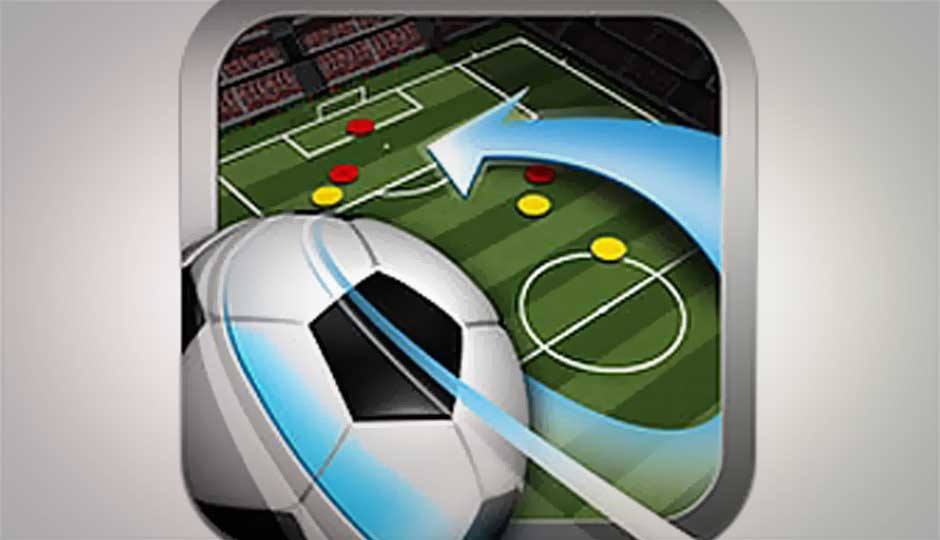 Fluid Football is one of the most interesting football games we have seen for a while, arriving just as the football season gets underway. Created by football pundit Andy Gray, Fluid Football is pretty much a must-have for all those who prefer their football to be a mix of intellect and action.

For mobile gamers, football games have tended to fall into two categories - the ones meant for the hardcore crowd (FIFA, Real Football, Football Manager) and those targeted at more casual followers of the Beautiful Game (Flick Kick Football, Flick Penalty). The former were all about trying to capture the excitement of football on the pitch, the latter simply tried to give beginners the rush of scoring or saving a goal. Until a few days ago, we thought there was no chance of the twain meeting. And then we got our hands on Fluid Football, a game that bears the name of one of the game’s resident pundits, Andy Gray (he of the profound Scottish accent, and ever ready advice and criticism on television). And we must say, we are impressed.

For Fluid Football actually takes the easy, intuitive gameplay that is the hallmark of games like Flick Kick Football and Score! Classic Goals, and blends it with football-related challenges that require more brain than brawn. The result is a fascinating experience that mimics neither the breakneck pace of the FIFA series nor the casual flick-it-and-forget-it approach of Flick Kick Football, but manages to strike a very healthy middle ground. And for the most part, stays on it.

The game is currently available only for iOS devices (an Android app is in the works, we believe) and is a 27.4 MB download. The essence of Fluid Football is the same as real football - putting the ball in the net. However, this is not a team vs team affair, but that of a few individuals sparring against a few others. In a classic scenario, you will have the ball and will have to place it into the goal after exchanging passes and outwitting the defenders and goalkeepers. Gameplay is incredibly simple - you hold down a player to highlight him and then have the option either to move him to another place by mapping the route out for him or just hit a pass to a teammate. At a certain point in the game, you get the option to take a shot at goal. If you choose to avail of it, you will suddenly be presented with a scene right out of Flick Kick Football with you getting the chance to swipe the ball goal-wards, only this time with a mobile defence and goalkeeper. Before every match situation, you are given a challenge - to score a goal in so many passes or in a certain amount of time or from within or outside the penalty area and so on. Achieving these gets you gold coins, about which we will talk more later. 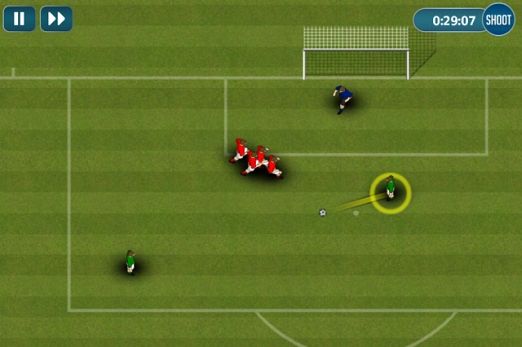 The game is all about hitting the right passes, and dodging defenders, to score goals.

Although the going is relatively easy at the beginning with you having nothing to do but tap passes across to your teammates and then line up a shot, things get tougher as you progress in the game, with more defenders and more complex situations. The challenges get more difficult to accomplish as well, with you often being asked to make more passes even while keeping the time taken to a minimum. Before you know what you are doing, you will be thinking three-four moves in advance, plotting and planning passes and shuffling players around even as another player controls the ball - incidentally, the off-side rule is implemented strictly so you cannot just plant one of your players a few feet from goal and bunt the ball to him. 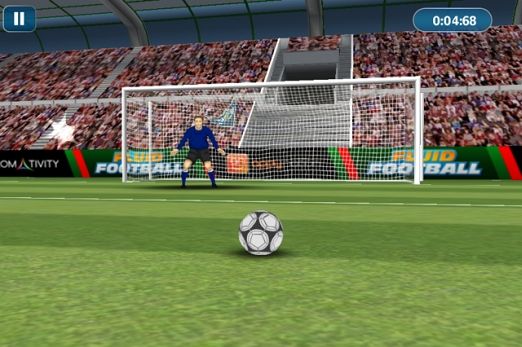 Choose the shoot option, and you face a Flick Kick Football like scenario, with you having to swipe the ball into the net.

The defence also is pretty spry and generally close on the player with the ball and try to shut down his passing options. You can pass the ball along the ground or gently chip it through the air, but the game is over if the ball goes out of play or goes into the possession of an opposing player. You get a top down view of the game so you can see all the movement happening on the pitch and work out your strategy accordingly. The graphics are not exemplary but are decent enough - you will mostly be looking down at the action from the top, seeing how players move. Each situation comes with its own set of challenges. And they KEEP getting tougher.

At its absolute zenith, playing Fluid Football is a bit like one of those air traffic management games with a number of dynamic elements on the screen. It is challenging and stimulating and when you do manage to hit a dozen perfect passes to get the ball into the net, immensely satisfying. Far more, dare we say, than the FIFA or Real Football series. The players almost seem to amble from place to place, which we initially found irritating but later were thankful for, as it gave us time to think. And this is a game for the thinking football follower. 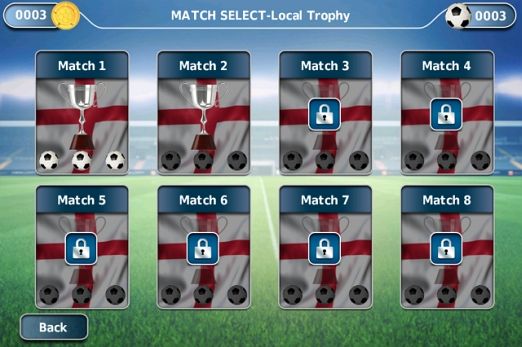 Here are matches and levels aplenty, provided you are prepared to loosen your purse strings.

Not that it is perfect, mind you. Although the game is a free download, you need to unlock new levels using gold coins which you can either earn while repeatedly playing earlier levels or by purchasing them the in-app way. Paying a small sum can also rid you of irritating apps at the bottom of the screen, and if you are really stuck and need help, you can fork out a gold coin and ask Uncle Andy (Gray) for a tip. Honestly, we really wish they had taken the money upfront and let us play in peace. Gameplay is also a tad rough around the edges, we often found our player taking off on a stroll when we wanted him to pass and on other occasions, our brisk passes turned into looooong looping chips that gave the defence ample time to cut them off. 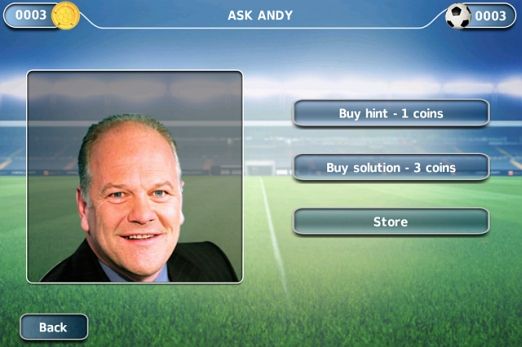 Andy Gray is always around for advice. But you need to cross his palm with gold!

But that’s just us whining and being perfectionists. Truth be told, we must confess to being utterly addicted to Fluid Football. Which proves that you don’t need official team licences and players to make a great football game - just some very good gameplay. If you love football and have an iOS device and haven’t downloaded it yet - quick, kick yourself. Yes, it is THAT good.