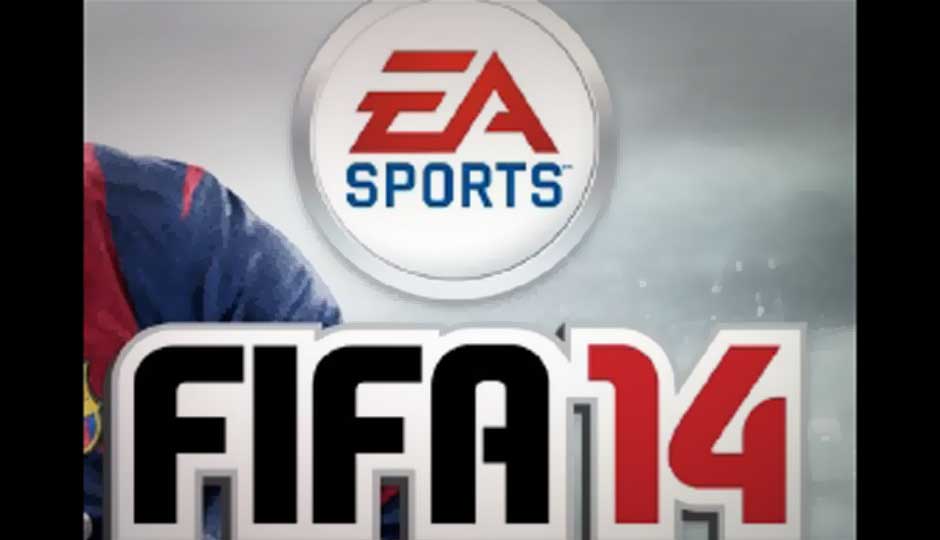 A massive change from the previous iteration, FIFA 14 will the full touch controls makes gameplay a lot easier for first timers to get the hang of. And for the rest of us, the experience is more involving and a tad more realistic. Possession play becomes critical, and unlike how Arsene Wengerâ€™s team set up to shoot at the goal only from 2 yards, FIFA 14 encourages you to get in some spectacular long range screamers. It is free to download, but you essentially pay Rs 270, for all purposes, to play the popular leagues. A must download game for any football lover, and surely this will be worth a few hours of entertainment, tapping and swiping furiously, on the smartphone or the tablet screen!

When games go free-to-download, there is always a sense of trepidation about the quality and the gameplay experience. What EA have done with FIFA 14 is nothing short of excellent. First, the game is free to download, which means you can get it on your iPad, iPhone, iPod Touch or Android device, without spending a rupee, and get going. Secondly, the clunky directional controls have been done away with, sort of, because there is the option of full touch controls. This makes it a lot simpler and intuitive for everyone involved, but even more so for first timers.

The FIFA 14 installation, at least on iOS is around 1.1GB. This will take some time to download, and we suggest you only do this over Wi-Fi. The game is free to download, and all purchases come later on, in-app.

All-touch Controls: A lot more involving
The biggest change is, undoubtedly, the switch to all-touch controls. You tap and hold on a player till there is a circle around them. Drag that, to define their movement on the pitch. This can also be done for off the ball players, giving you complete control over the build-up play, or when the team may be parking the bus! Tap on another player and the ball gets passed to that player, assuming your team has the ball. A quick swipe towards the goal enables a long shot, and the quicker you swipe, the better the shot power.

For the fans who prefer things old school, you have the option of switching back to the legacy control method with the on-screen buttons.

When the opposition player has the ball, tap on that player and he becomes the target of closing down by the proximity players from your team. When one is closest, a short swipe gesture enables a tackle. Just be careful of not overdoing this, otherwise this will lead to a yellow, or worse, a red card.

In the settings, it is important that you do not zoom in the camera view of the pitch more than the default setting, otherwise you will have the issue of having some of your players out of the screen when you want to identify a pass.

These touch controls make the game more responsive, and a lot more involving, than the clunky directional controls. Anyone who isn’t already a FIFA fan can get the hang of this, as long as the basic of how a football match works, are clear. 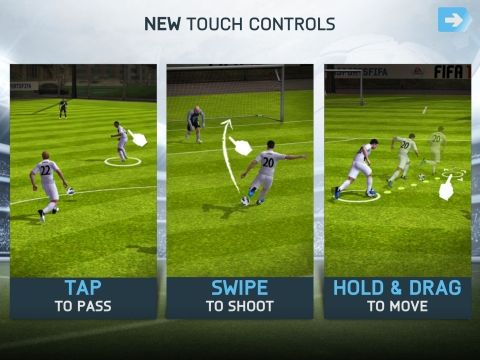 Features: Leagues, and a lot more
When you enter the game, in its free avatar, you are immediately asked to play an ultimate team game. I personally chose the Stephan El Shaarawy’s 11 to take on Lionel Messi’s team. In this All Stars mode, you get great players on both sides, and this is perhaps the most exciting way of getting you used to the game and the new controls. You get the Ultimate team where you set up a team and play in tournaments or individual matches against other teams. Then there is the Penalty Shootout mode, where you can pick a team and play them against a team you hate, in an assault on the goalkeeper. EA also has the match of the day section, where the best matches from the same week are updated, and gameplay is replicated with realistic events. Selected games from some leagues get into this section. 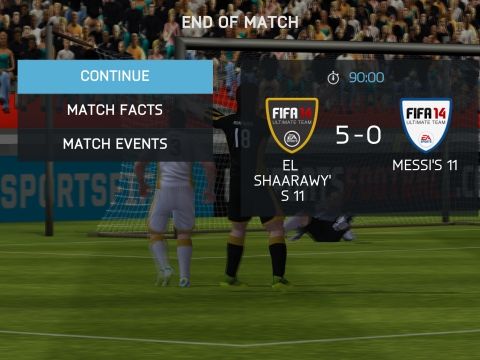 Who is the greatest player in the world now, eh?

However, if you want to play a proper season of the Barclays Premier League, you need to pay Rs 270 to unlock that section of the game. This is the fine-print, which any hardcore football fan needs to understand beforehand. Pretty sure no fan worth his salt will let the game exist without the actual ability to manage a team, or playing in the proper league battle. Once you do pay and unlock, you also get the Manager Mode, where you don the role of a player-manager of your favorite team. This mode lets you control the transfers, training and even certain aspects of the finances of the club. You control the gameplay, or you can leave that to AI, but then that is no fun, init?

For all the online modes, you get the option to invite friends and play with them. Both need to sign up and login with EA's Origin ID and password. For some reason, every time I exited the game on the iPad, the login was lost. This is something that just becomes annoying after a while, having to punch in the login and password every single time.

There is also commentary in various languages, but you will need to download the language packs manually. This isn't a bad thing, considering adding all these by default would have just increased the download and install size.

Also, you can regularly update your team’s squad, in line with the real world transfers that may be taking place. This is another aspect that adds to the ever increasing realism that FIFA 14 brings with it.

Gameplay: He shoots, he scores!
The single biggest change, is the single biggest improvement for the game. FIFA 14 just makes the game a lot more attractive for casual gamers, who EA hopes to convert into regulars. As I had described earlier, remembering the new controls  is not a problem at all, because thankfully, there aren’t millions of combinations. We like this simplicity, and we hope EA lets it remain this way in the future versions.

A couple of issues that I did notice were that the drag to set run direction mode does not have any impact on the sprint speed, for better or for worse. This is something that could make a huge difference, if implemented. At the moment, the speed is basically in the control of the AI, but then again, that does not make a zippy Luis Suarez or Daniel Sturridge stand out against a sluggish Gareth Barry or Rio Ferdinand. 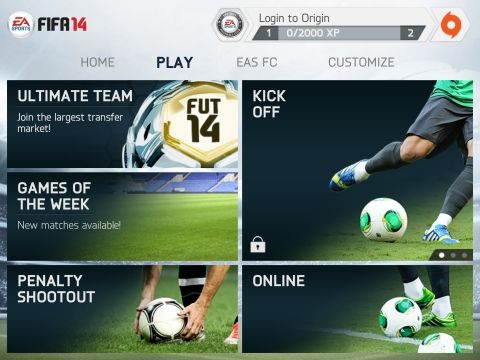 The sheer variety of game types is going to keep you busy for hours on end.

However, thankfully, what you do have control is over the shot speed. At least the long pass, the hoof from the back-line or the stinging shot on goal. This is perhaps the most exciting part of the gameplay. During the matches that we played, there were times when the goalkeeper was beaten simply by the searing pace of the ball, even though he had gotten behind the line pretty well. Absolutely true, hand on heart, you can actually attempt outrageous goals from the centre line, aka, David Beckham against Wimbledon or Xabi Alonso against Newcastle. The swipe to shoot gesture’s speed will define the speed of the shot, and the straighter the angle, the better the changes of the ball going into the net, rather than over the crossbar. I managed some rather spectacular goals while checking out this game, including one from just ahead of the centre line. 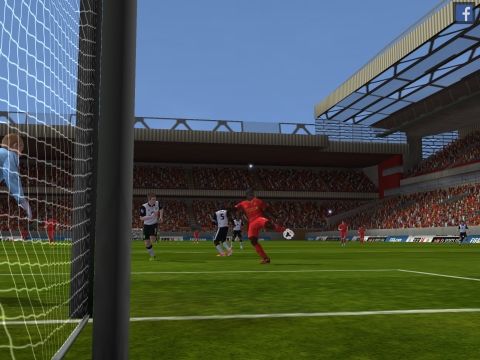 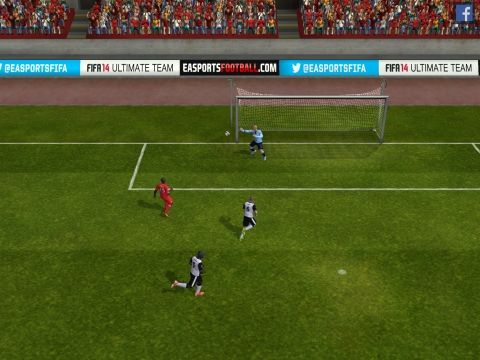 The goalkeeper has no chance!

Coming back to the sprint speed issue, there is another problem that creeps up. Because you have no control over the quickness of the player, games between two evenly matched teams turn into a boring mid-field battle with quick closing down, and numbers to even each other out. This is where one moment of sheer brilliance can change the game, but that may be few and far between, for most fans.