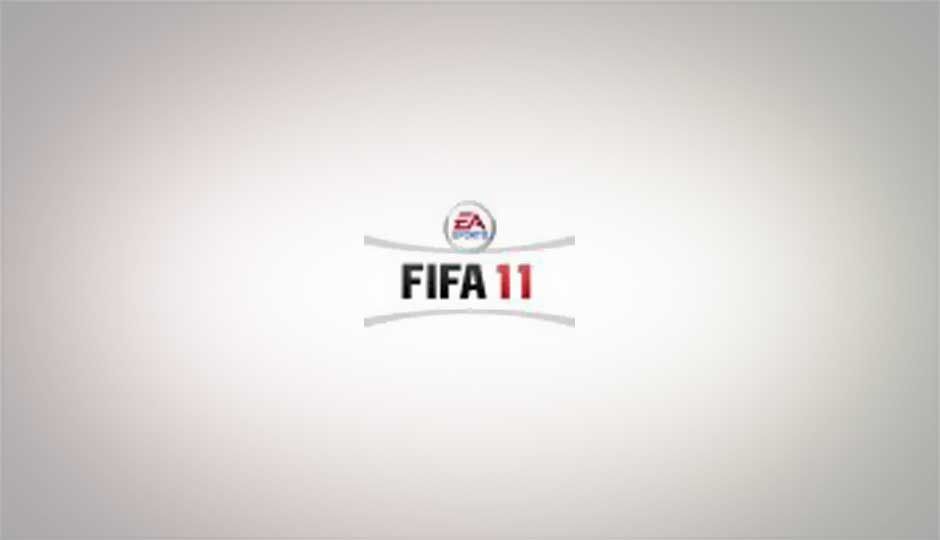 In terms of gameplay, this is the best, and one of the toughest FIFA yet. FIFA 11 has certainly impressed us, chipping away a lot of edges for a very exciting new version of one of the most awaited yearly titles.

For a while now, the alternate versions of FIFA have impressed. While FIFA 10 could not improve much upon the excellent FIFA 09, iteration number nineteen, aka FIFA 11, had some ground to make up.

For all of us who look forward to the title year after year, going for a quick ‘quick match’ to check out the gameplay is almost a ritual now. Our hands moved quicker this time as FIFA 11 carried much hype about the gameplay, which underwent a deep makeover. For starters, the PC edition this year uses the same game engine as the console (PS3/XBOX 360) version.

Surprisingly, the PC version does not bring up the menu when started, instead you have a player and a goalkeeper one-on-one in a training arena. Menu can be brought up by pressing ‘Esc’. The same happens as you start a game. Incredibly, the game has almost zero load time for offline matches. 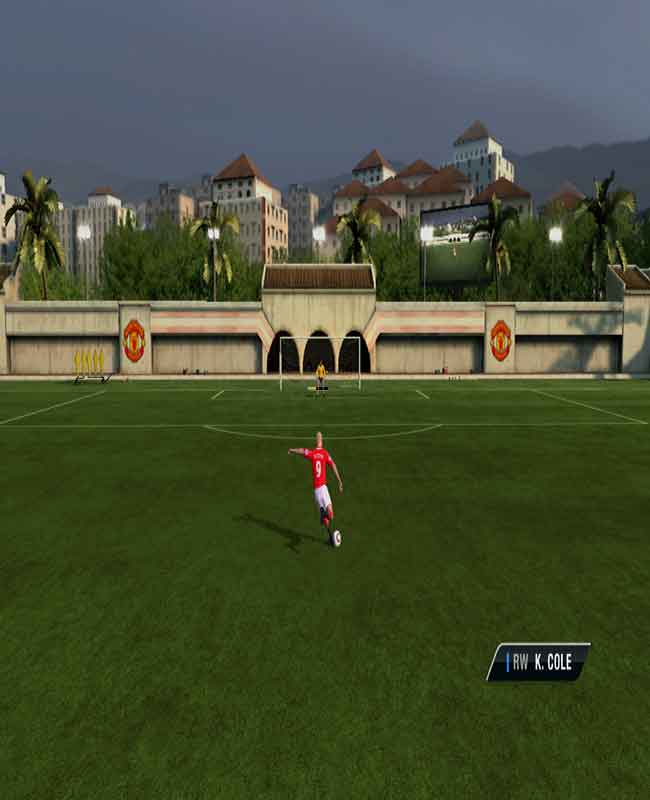 First look at the game shows the immediate jump EA has made to catch up with PES 10, a game we migrated to simply because it made FIFA 10 look ugly. The players look more real than ever. It is impossible to miss the graphical refinement once the players start running – turn a sprinting player and you can actually see him tilting his body with the grace expected of an athlete.

Prior to the release, the most advertised feature of FIFA 11’s gameplay was Personality - a new system which imparts attributes to each player, making him both unique and similar to the flesh-and-bone version. Personality is no ad gimmick: David Villa really is a sharp-shooter, putting to net any ball he touches in the box. Messi is nimble, but the lack of strength is evident. Gerrard and Lampard fire piledrivers, and Rooney loves to drop behind the striker. The instances are countless, and smiles spread wide upon our faces on seeing such lovely imitation.

PES fans often complaint about FIFA’s ping-pong passing and the one-man shows. Cristiano Ronaldo sprinting down the pitch, untouched by mortals. The seeds for removing these ‘arcade’ elements were probably sown in FIFA 10, with much slower sprints. But FIFA 11 goes many steps further, if not all the way. The concept of building up of the play is introduced, with each team having its own different build-up speed. You have to patiently break down the defences, or deliver killer through balls. It is not possible for just any player to sprint past the generally strong defenders, who outmuscle the strikers if the approach is too direct. You have to use the speed of the faster strikers to outfox the defenders. But mastering this is not difficult, and it did not take us much time to get back to winning ways. 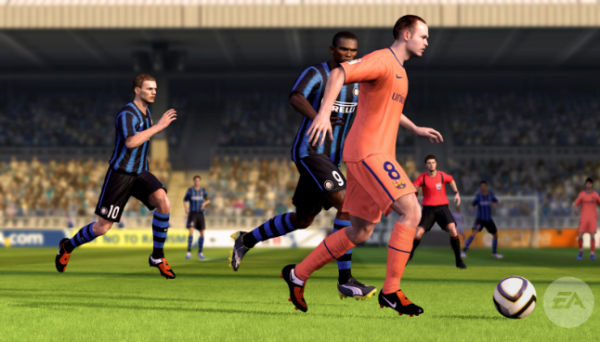 Midfielders/Forwards are nimble and fast, while defenders are stronger

One complaint that we have regarding the gameplay is the excessive barging. This 360-degree 'fight' for possession, as EA put it, is a little overdone. Heavy defenders can step between the ball and the player, and send lighter strikers tumbling. With such physicality in the gameplay, the game looks much more like that in England than, say, Spain or Italy. Even English referees would blow the whistle if you ask us. Although a few days of practice will teach you how to avoid getting yourself in a situation where you can get barged. And what amount of barging by your defenders is fair play.

The crossing system is abysmal. While defending the crosses is way too easy now, putting them in the box (and scoring at the end of them) has become difficult. One major flaw we noticed was how many crosses from byline came from behind the goal line, leading to an unnecessary goal kick.

Virtual Pro finally makes it to the PC version, where you can create a player of your choice in a team of your choice. You can train him in the training arena, or fulfill his potential by playing him in matches. In this way, Harmanpreet Singh has become the first player from India to play for Manchester United as centre forward. First choice. 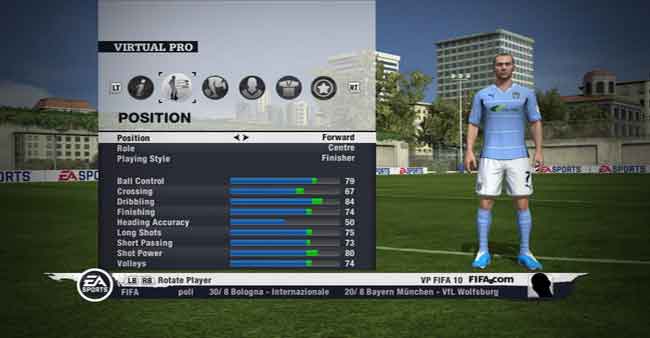 The commentary, as always, gets to your nerves after a while. Game developers have to come up with a system to update what the commentators speak, because after a few days of extensive play they always become repetitive.

Read on to find out about the different game modes and our verdict....

The game modes can be grouped under offline and online categories.

[RELATED_ARTICLE]Besides the regular single player matches/tournaments, Be-a-pro mode offers the alternate player-locked gameplay. You can now be the goalkeeper too, though we found it rather boring after the initial rush settled. First introduced in FIFA 08, three years of maturity of this mode has made one thing clear: It was born for multiplayer action. More of that in the online game modes. 'Be a Pro: Seasons’ allows you to go through the seasons in Be-a-Pro matches with a player of your choice.

Despite all that EA boast of, Manager mode is sterile to say the least. When you encounter a scouting report which does not allow you to see the age of the player in question, it is clearly evident that managerial fantasies are best left to be fulfilled on Football Manager, or Championship Manager. Unfair comparing the game with pure management titles? The Manager mode in FIFA does not even compare with the Master League of Pro Evolution Soccer. The realism is absent.

One reason for the huge popularity of FIFA 09 was its amazing online play. Introduction of online Be-a-pro multiplayer matches lead to about 350 million(!) online matches between 09 fanatics, according to EA.

FIFA 11 on PC allows only upto 5v5 in such Be-a-Pro matches, which is rather disappointing, as console users get 11v11 this year. Then there is the usual head-to-head game mode, for ranked/unranked 1v1 game. There are a few ways to select either of these modes. You can either let the game choose a match for you or you can explore the online lounge and choose your battle. You can also start a game with friends from your list. 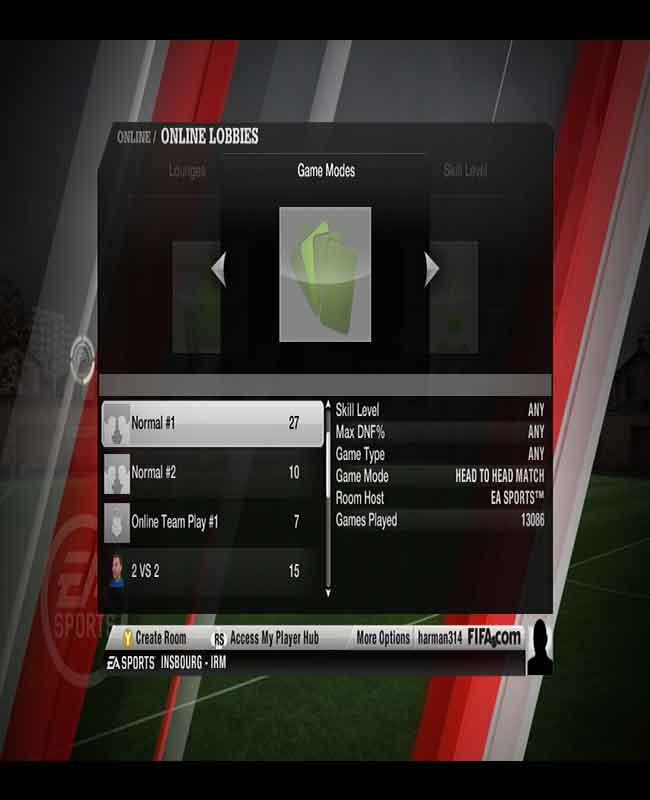 Online Lobbies based on game modes, skill levels, and else

The online play showed negligible lag on our 512 Kbps line, atleast during the late hours that this game was reviewed in. The process of making matches is smooth, but we don't think anything slower than 512 Kbps would give you a playable match.

If that is the case, it is best that you stick to the new LAN Play. FIFA 11 gives full value for your money by enabling you to play not just 1v1 like the older version. Now upto 10 of your friends can participate in 5v5 matches on the local LAN. A welcome change, we say, in contrast to how many developers are doing away with LAN play, as dedicated servers curb piracy. We believe that if someone has bought the game, he should not be deprived of the full features just because of low connection speed or presence of a firewall. Kudos EA.

Online play (5v5 matches) is addictive. You are automatically directed to a random game (or depending on your filter criteria, based on region or skill level of players etc.), and a timer ticks down, at the end of which the entry to the game closes. We found most of our matches had 8-10 player pouring in instantly, which is not a surprise, considering FIFA 11 has been the fastest selling sports game in the history. However, you may often have a player going berserk during the match and ruining it all. It is all about building your own little group on the net for reliable matches. In 5v5, as soon as any player pauses the game, the control is smoothly shifted to AI. A new addition to the online modes on PC is the Pro Clubs mode. The mode has got its heart in the right place. You can create a club or join clubs that have already been created. What would follow is a virtual career as a pro. Find a club of your choice (there are plenty!) and request them to sign you up. We already see the future of this mode. The glass ball shows drama on forums, where loyalties shall be tested, and transfers shall take place. 'Sharpen your skills, and we might sign you' would be the message. Super-exciting but with obvious pot holes. Some clubs have 50 players signed up, but only 5 can play a particular match after all.

As a simulation, FIFA still has a few more steps to cover. Some specific passing moves can still be used to pull off easy goals, especially as the passing is slicker with complete 360-degree control. But, this does not take away the fact that in terms of gameplay this is the best, and one of the toughest FIFA yet. FIFA 11 has certainly impressed us, chipping away a lot of edges for a very exciting new version of one of the most awaited yearly titles.