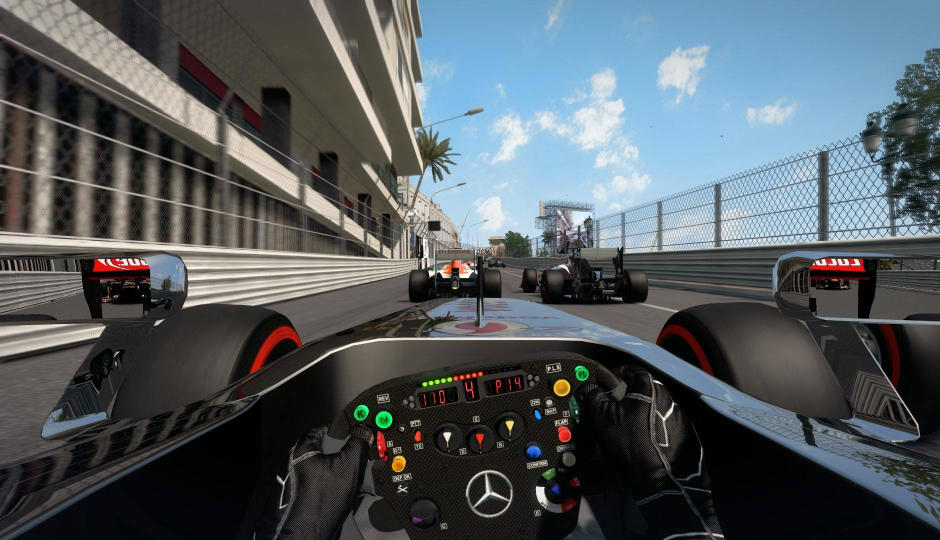 Not a massive update to the F1 2012 game, but a re-tune. And as it is always with re-tunes, it can go either way. For me, F1 2013 is a disappointment in some rather critical aspects, and unless you are pedantic about having the very latest game version in your console, you would be better off sticking to the F1 2012. Important to point out that there is a huge difference between F1 2013 for the PS3 and the same game on the PC. We prefer the PC version, simply because it looks better and is much less annoying in terms of gameplay. We wouldn't recommend an upgrade.

For any true Formula 1 fan, this the THE game that they wait for, every year. Codemasters have done a rather good job of it for the most part, with the critical aspect being - it is actually out there to buy and play. F1 2012 was an extremely impressive evolution over F1 2011, but the 2013 iteration is actually a minor upgrade, with newer cars and the difference in performance. However, the Classic Mode is what really gets the attention.

Getting Started: Two routes you can choose
The F1 2013 iteration brings one of the big changes, particularly for the casual gamers. While F1 2012 forced you to go through the entire rigmarole of a Young Driver’s Test. Yes, that is still the route you need to take for the career mode, but anyone who wishes to get down to racing can head into the Grand Prix mode. There is the rather neat Season Challenge, which lets you race a part of the season in any car you choose. Quite neatly, this entire season challenge can be wrapped up in a few hours. Then there is the Scenario Mode, which throws up a series of challenges. As you would expect, there is the simple “choose the track, choose the car, and drive” mode as well.

The Young Drivers Test is still the route to starting the career mode. You go through a series of tests at the Yas Marina circuit in Abu Dhabi, but quite frankly, this is not really for everyone. Only those who are in this for the long haul will go through this test, because what waits on the other side is still a rather long journey to hopefully the top step of the podium. Depending on how many gold, silver and bronze medals you collect during this test, the choice of manufacturers will start from the back of the grid. And that usually is the long route to fighting challenges, winning them and getting contract offers from the other teams.

Speaking of which, in the Season Challenge too, you get the option of challenging a rival for a period of three races at a time, and if you do win the challenge, you will get an offer from that team.

Interface and Visuals: Surprisingly bad
The interface definitely looks a lot better, even though the theme and the layout style remains pretty much like the F1 2012 iteration. The stacked cars system works well, and we are happy that has not been changed.

Get on to the race track and the cars look extremely detailed and the circuits even more so. The realism of the tracks is extremely well replicated - the Eau Rouge at Spa-Francorchamps is as freaky as it possibly is in real life, and Singapore looks delightful at night. The weather effects looks realistic and fantastic, for example, to the extent that the spray thrown up by the car in front makes vision progressively worse as you get close to it. The only shortcoming that I noticed is that the track surface itself, looks a tad too clean. Yes, there will be the occasional skid marks from someone who braked too late for a corner, but there are hardly any “marbles” - the ones that are used as excuses time and again in the real F1 circus.

However, there is one big problem with the game as it is. The fact that this is limited to the 720p resolution means that on a Full HD panel, the text looks terrible. Even though F1 2012 was also limited to the same resolution, there was never this much visible difference, for the worse. Less visible so when you are on the track, but navigating the menu is a disappointing experience. It is rather unexplained why the PS3 version has been limited to 720p, because it is not rocket science to know that 1080p would have looked infinitely better across a majority of TVs that gamers would be using with the console. While it is not exactly a deal breaker, it does leave a sour taste in the mouth.

The Classics: For the true F1 fan
This is the real highlight of F1 2013, because honestly, the rest remains pretty much a 2012-ish offering. You get a selection of 1980s and 1990s cars and tracks, complete with their sponsorship. But, it is not just a feature bolted on to the rest, because Codemasters has certainly put a lot of effort into making this realistic. Not only are the cars different, but the handling is very different from the 2013 cars. And furthermore, they are very different from each other, adding to the realism. Michael Schumacher’s 1996 Ferrari will handle very differently from Gerhard Berger’s 1988 Ferrari, each having their own unique characteristics. True to what the legends tell us, these cars feel closer to the entire driving experience - the raw power makes these literally uncontrollable beasts, unless you really coax them. Compared to these, the handling on the 2013 cars feels like child’s play. Crucially, for the experience, the engine sounds and the bodywork elements of these cars are replicated with each car retaining their individual identity.

Quite frankly, I spent more time in the Classic Mode, than tear my hair out with the actual 2013 cars. I have my reasons, which will be illustrated in the next section, but even then, the Classic monsters are actually where all the fun is.

Gameplay: A lot seems to have been broken
While we had criticized F1 2011’s car handling characteristics, 2012 saw a rather impressive progress, making handing much easier to master and a little more forgiving in case you put a wheel wrong. However, the same madness is back with F1 2013. These cars are just uncontrollable to drive at times, and even if you have the assists switched on, they are hardly of any help. Some examples to illustrate what I am on about.

Head into the first corner, which is essentially a chicane, at Monza, and most times the car will not slow down enough with the AI braking. This is something that was never an issue with F1 2012, and with the AI off, you can pretty much forget about ever making the corner with the correct line. At the exit, you literally have to wait for the car to be pointing straight again, before tapping the throttle. Otherwise, you will spin around like a tumble-drier.

Maybe I was having a bad day at Monza, so I headed to Spa-Francorchamps. As you exit the Les Combes turn 8 and head into right turn 9, the car will inexplicably keep turning left and straight into the barrier. You literally have to tip-toe your way through most such corners. At Pouhon, the AI braking will ensure you head wide into the gravel trap.

Same for the turn 12 chicane at Nuerburgring, where the car will inevitably oversteer and spin out at the exit.

Just to be doubly sure, I have driven these tracks in a variety of cars - the Red Bull, Lotus, McLaren and Ferrari, but the situation is pretty much the same. Certainly not the game that will appeal to the casual gamer, who will find this too tough to start off with. And a fan who wishes to stick around will be left frustrated.

It is not just the ridiculous handling that is the issue. You even slightly bang wheels with a fellow racer, and there will be a 10 second time penalty waiting for you. Alternatively, you could have Jean Eric Vergne barge you off the track as you overtake him on the outside, and I did not see any 10 second penalty added to his time at the end of the race. There are just too many penalties for anyone to enjoy the game. With the constant stream of what I would call “cheating”, it inevitably becomes a battle of the ego, and you end up playing with gritted teeth, and cursing. Yes, there are the positives as well, when you are racing, but these negatives more than overshadow them.

Comparison to the PC version
Just to double check after this bad experience, I actually went out and procured the PC version of F1 2013, and the only way to say it is - there must be a parallel universe. The PC version does not suffer from the handling issues that the PlayStation 3 version, at least to the same extent. And that just makes gameplay so much better and happier. Secondly, the entire thing looks so much better, when the PC is connected to the same 1080p display. Which makes us wonder why the PlayStation 3 version this time around is so bad. Reminds us of the 2011 version, which also had literally un-drivable cars, but I was happy that things were improving with the 2012 version. But, at the moment, I would recommend the PC version over the PS3 version, until an update solves the bugs for the console version.