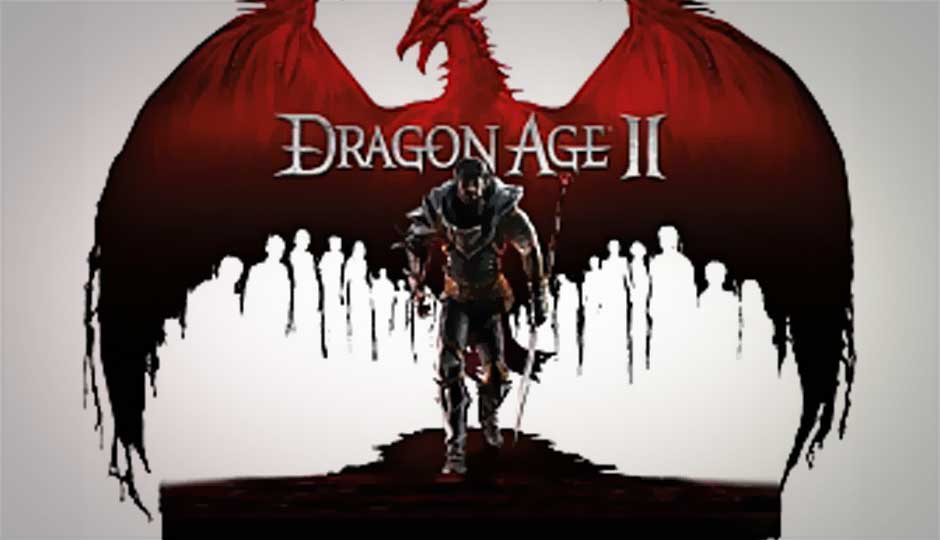 Overall Dragon Age II is a great game and a worthy sequel let down by poor combat balance, overused locations and numerous bugs — some of which are showstoppers but have been fixed by now. The subject matter that Dragon Age II deals with — without spoiling anything — is a lot of what was left out, or glossed over in the first game, now explored with the kind of depth it deserves. The game improves over the first in many ways but brings enough changes and flaws to alienate some of those who loved the first game. 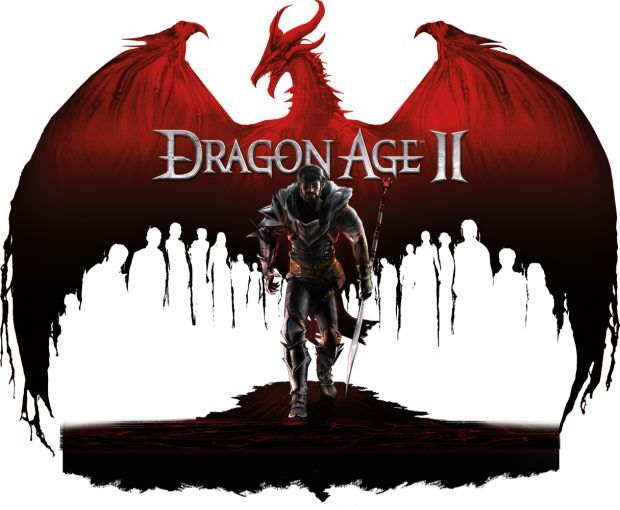 Dragon Age: Origins was an impressive game that managed to garner quite some accolades despite its numerous flaws. Dragon Age II is a true sequel to the the marvelous original, in that it manages to bring in as many flaws as it fixes. You know, just to keep things balanced.

Dragon Age II is set as a framed narrative; it is the story of Hawke as told by his companion Varric, a suave dwarf. Varric is being interrogated at some point of time in the future, regarding Hawke's (your) involvement in the series of events that led to the current crisis in the world. He tells of Hawke's rise to power over the course of a decade from just a refuge to the champion of Kirkwall and beyond.

Varric isn't adverse to exaggerating or lying of your exploits in the story he is telling, a point that is picked up by his future interrogator. In fact the first few minutes of the game tell the legendary version of Hawke's story where his abilities (and his sister's bust size) are greatly exaggerated.

Oddly, despite the story being told in the form of a flashback, you know very little of what it is you're supposed to achieve in the end! What exactly happened? What is the importance of my role? Such things were very clear in the first game where your role in defeating the blight was clear from the beginning. It also makes it difficult to talk about any of the significant aspects of the game's story without spoiling something or the other! 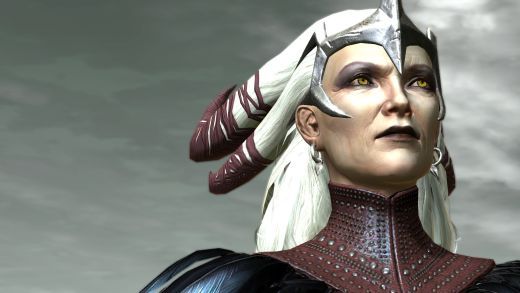 In Dragon Age II you are merely someone who happens to get caught in the events of the city as you try to make your way. It works well for the story, instead of being the active leading party behind everything, you are as caught up in events as anyone else.

However this also means that for the most part, you are unaware of where you are heading. You take up and complete quests to move ahead, but each part seems insignificant as the sum of the parts will only become clear at the end of the game.

Your companions have a bigger role to play in this game as they have stories of their own rather than simply following you around. Stories that have actual relevance to the plot instead of simply being quests to gain approval. Some of the reasons for your involvement in the events that lead to your rise in power are your companions. Instead of having a party camp where all your companies hang around like zombies waiting for the next apocalypse, they have their own hangouts, which you will need to visit from time to time to move forward their story. 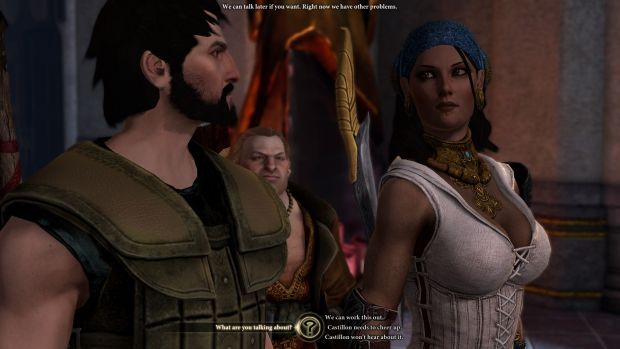 That said, your companions still hang around like mindless zombies, albeit in their own homes instead of your "party camp". In fact most NPCs remain unchanged in the game despite the fact that this game is supposed to cover 10 years of story. The same merchants stay in the same spots, the bartender at the local bar seems to have had his feet nailed to the ground as well. This is one place where BioWare could have taken inspiration from The Witcher,  — a game that CD Projekt built on BioWare's own engine — which features more dynamic NPC characters that go about their business, moving from work to home as the day comes to close, and moving towards shelter as the weather turns for the worse. While Dragon Age II does add a day, night system like The Witcher has, it is merely a toggle, there is no evening in the world of Dragon Age II. Staying in the same place, no matter for how long, wont turn night to day; those powers lie only with the area map. Another oddity, any loot dropped at night time is only visible at night! So if you leave some dropped loot at night time, and quest in the same area in day time after that, you will find no loot. Quest yet again at night, and the loot reappears.

The old approval / disapproval system for companions is gone, replaced by a new friendship / rivalry system that still lets you get companion quests even if you aren't the bestest of buds. The system is still imperfect though, as you need to be friendly enough or a big enough rival - being a neutral friend has fewer benefits.

Dragon Age II modifies the older flat skill set with a skill tree. Some skills can be upgraded so you can improve the skills you use more. This does make combat less varied though, as you have fewer skills at the end of the game. I ended both Dragon Age: Origins and Dragon Age II as a level 23 character, yet while I had around 30 different "abilities" sprawled across my bar in Dragon Age: Origins, in Dragon Age II it was a mere 13. Despite being much shorter, Dragon Age II has a level cap of 50, up from 25 in the first game. It does not seem possible to reach that high in a playthrough (without using exploits), it is likely this is something reserved for future DLCs.

Each companion also has their own unique skill tree that is specialized for their character cannot be used with other characters. These skills, however, will only unlock if you reach a high enough friendship or rivalry score. If your friendship / rivalry is high enough, some characters will add a permanent bonus. This particular feature though was bugged during my playthrough. A bug caused you your statistics to reduce by the bonus amount when the character was removed from your party instead of being added to your character when the character was included. After a few swaps this can have severe penalties that make the game unplayable. This bug seems to be fixed by now, however it is still sad that a huge bug such as this present during the game's launch.

Combat in Dragon Age II has as many flaws as it has improvements. Combat is more responsive, and dynamic, a huge improvement over Dragon Age: Origins, which seems like a few 90-year-olds discussing their medications in comparison. For some reason friendly fire seems to have been removed in all difficulty levels except Nightmare. This makes the game much easier when dealing with mobs of weaker enemies, and you might actually have to turn up your difficulty setting just to get a challenge. Until you reach a "boss" fight of course, which are comparatively tougher. It is clear BioWare still hasn't figured out the right balance in combat.

When it comes to graphics Dragon Age II is a huge improvement. The graphics and textures are much better, crisper, and less... brown. It holds up well especially for an RPG. 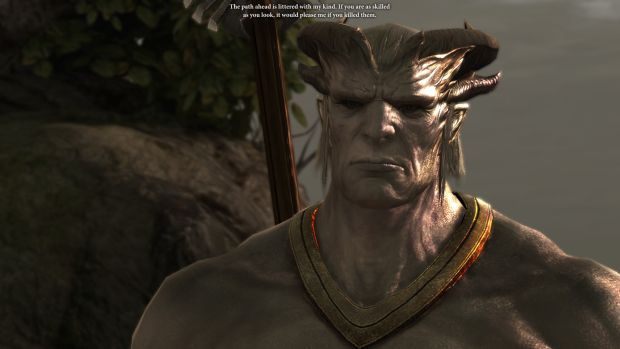 The Qunari have had a makeover

With the first game released just recently, near the end of 2009, and was followed by a string of DLCs and an expansion pack, it seemed strange that BioWare was able to release a sequel so soon. Well, after playing the game for even a short while it is clear how they managed this impressive feat.

For one the character classes have been removed, and you can only play as a human. Secondly the game is set in a much smaller location of Kirkwall and a few surrounding areas. The game now has a night / day switch so the same locations offer different quests depending on what time of day you visit them. Finally, and most frustratingly, maps have been overused excessively. Every warehouse looks the same, and even worse, all caves look the same! Different areas just have different sections locked out and different points of entry and exit to create the illusion of variance.

The game is also much shorter, while the first game could easily extend beyond 80 hrs if you finished each quest, this one is a much shorter 55hrs, but that merely explains how the game came out so fast, and doesn't hamper its quality.

It does seem like the game has been rushed in order to cash in the popularity of the first game. While this is quite irritating, and means that the game did not get the kind of effort it deserved, the end result is not as bad since it is mostly redeemed by the storyline.

Overall Dragon Age II is a great game and a worthy sequel let down by poor combat balance, overused locations and numerous bugs — some of which are showstoppers but have been fixed by now. The subject matter that Dragon Age II deals with — without spoiling anything — is a lot of what was left out, or glossed over in the first game, now explored with the kind of depth it deserves. The game improves over the first in many ways but brings enough changes and flaws to alienate some of those who loved the first game.

Hopefully BioWare will not repeat these mistakes with Dragon Age III and will give the next in this franchise a few years to develop before releasing it. We will wait.