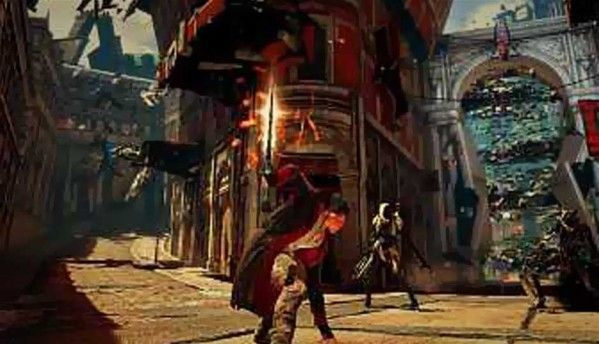 DmC is the perfect reboot and should be set as a benchmark for other action game reboots. The story is simple yet entertaining thanks to the great execution of characters. The combat is fantastic and friendly to newcomers as well as challenging to veterans. At the end of the game you have a satisfying feeling of accomplishment. I haven't had so much fun playing a game since Batman Arkham City! The game will take about 12 hours for the first playthrough and there are unlockables as an incentive to go through the journey once more. Not to mention the varying difficulty levels. A must buy for all the action adventure fans out there. A free Bloody Palace DLC, providing endless more hours of time spent honing one's skills, will also make its way to all versions of the game, soon.

When we heard that the Devil May Cry franchise was getting a reboot, we were quite sceptical as to what it would be like. Capcom made the first four games in the franchise, and calling it successful would be an understatement, even though it was met with some criticism. If you are wondering why fans weren’t happy that the series was getting a reboot, we have some insight for you. David Jaffe, the man who made a little game called God of War, drew inspiration from Devil May Cry. So, when the onus for the reboot was given to Ninja Theory, scepticism ran sky high.

Ninja Theory has a history of making good games. Their portfolio includes Enslaved, which was a good action adventure game and Heavenly Sword, one of the launch games on the PS3. Both the games were good and I enjoyed them.

Under the direct supervision of Capcom, Ninja Theory was hard at work not only giving Dante a new look but a new story, new character and making the DmC universe a lot crazier. Have they succeeded in resurrecting the franchise, or does this game deserve to rot in Limbo? Read on to find out!

Story
The story of the game is quite straightforward. You don the role of Dante, a Nephilim. He is an offspring of the demon, Sparda, and the angel, Eva. Dante doesn’t remember anything before the age of seven. He is a brash badass with not a care in the world and does what he pleases. The opening of the game makes this very clear. He is reunited with his twin brother, Vergil, who unveils the truth to Dante that his mother was murdered and father imprisoned by the demon God Mundus. And now it is time for revenge!

The story of the game is pretty straightforward and fans of the franchise will see the ending twist a mile away. Nonetheless, the plot still has some interesting moments and the way the story is gradually released to the players is nice. A lot of time is spent building each character and that is a good thing. Towards the end of the game you can connect with each of them and their motives. There’s also room for a sequel!!

Gameplay
Hack and slash is the name of the game in DmC. The gameplay is essentially divided into two parts – traversing and combat. Let us start with combat.

Combat
Dante has his sword, Rebellion, and his twin pistols, Ebony and Ivory. Holding down the right trigger gives you devil-mode turning Rebellion into a heavy weapon that is slow but does a lot of damage. Holding down the left trigger gives Dante Angel powers making Rebellion into a fast moving weapon good for hitting multiple enemies but doing less damage. Each mode, Devil and Angel has one more weapon and Dante also acquires two more guns in the due course of the game, making his abilities awesome.

Every weapon and every technique in the game has its USP’s and this is where the game gets fun. There are specific enemies that require specific attacks to neutralize them and this adds a good sense of variation to the combat gameplay.

With such a large arsenal, Dante is ready to take on the demon army in style. You can chain together numerous combos across weapon types, and that is where the game excels. It is challenging enough for veterans to rank up the highest score on the leaderboard as well as interesting and easy enough for newcomers to pick up the controller and feel like pros.

It is possible for you to use every weapon at your disposal in combat and not only pull off some insane moves but look like a complete badass while doing it. Performing combos is quite easy thanks to the user friendly and customisable controls.

Using Angel mode allows Dante to pull himself towards an enemy where as Devil mode lets Dante pull enemies and objects towards him. This is especially useful if you need to get close to an enemy or get out of a tight spot.

If you are one who likes hacking and slashing in videogames, then this is definitely the one for you.

Traversing
Apart from kicking demon ass, Dante also traverses the environment. To begin with, the game takes place in Limbo. Think of it as a more gothic and displaced version of the world shown in Constantine. You have the standard running and jumping, but Dante can use Angel mode to glide a bit in mid air, which helps him cover large gaps. You can also use Angel mode and pull yourself up to ledges or demon mode to pull the ledge out and jump to it. Using these moves in a series of situations feels very exhilarating and fun.

The environments themselves are built in such a way that a simple act of jumping a few places and pulling yourself up on a ledge not only looks cool but also gives you a satisfying feeling of accomplishment.

Nearly 95 percent of the game takes place in Limbo where Dante takes on the demon world. This is a very gothic destroyed imagining of the real world and it is very awesome. Be it a deserted theme park or a subway station; even the insides of a mansion or a factory, the way the environment is laid out is fantastic and very ideal for some breath-taking traversing action.

There aren’t any real puzzles in the game except for one which is towards the end and that is a good thing as most of the attention is focused on the action and traversing.

Graphics
The graphics of the game are very good and at par with any AAA title out there. The use of gaudy yet dark colours to represent Limbo really brings the world to life. Each environment you go through has a distinct colour pallet and some unique traversing keeping the experience fresh throughout. You have the environment swarming with demons and what look like an alternate reality, the way the demons see our world. A lot of thought and effort has gone into the look of the game.

Even the new Dante looks like a brash young adult who doesn’t give a damn, and you see him grow out of that. There is also a cameo of the “white-haired” Dante in the game just to tease fans of the franchise and that is a nice touch. The animations in the game are brilliant. From Dante’s moves to the animations of the various enemies and even the bosses, the game looks great.

The ability to execute a variety of permutations and combinations of moves without the slightest hiccup in animation is fantastic.

Sound
When Ninja Theory used the legendary Andy Serkis (more commonly known as Gollum) for Heavenly Sword and Enslaved, we knew that they knew the importance of authentic voice acting in a game. That same level of quality can be found in DmC. The voice acting of all the characters is great and the dialogue can get cheeky at times, but its execution is fantastic making the characters not only believable but also relatable.

The metal background score in DmC compliments the action as well as the environment giving you the feel of being a brash youth in a world that wants to destroy you. You may want to bump up the volume while playing this one.

The swish and swipes of Rebellion along with the bang of Ebony and Ivory are worth every mash of the button. The sound design is not only true to the tradition of the franchise but just plain awesome.

Verdict
If you are still caught in all the brouhaha of DmC being a reboot, we suggest you play the game before voicing your opinion. It is the perfect reboot and should be set as a benchmark for other action game reboots. The story is simple yet entertaining thanks to the great execution of characters. The combat is fantastic and friendly to newcomers as well as challenging to veterans. At the end of the game, you have a satisfying feeling of accomplishment. I haven’t had so much fun playing a game since Batman Arkham City! The game will take about 12 hours for the first playthrough and there are unlockables as an incentive to go through the journey once more. Not to mention the varying difficulty levels. A must buy for all the action adventure fans out there. A free Bloody Palace DLC, providing endless more hours of time spent honing one’s skills, will also make its way to all versions of the game, soon.