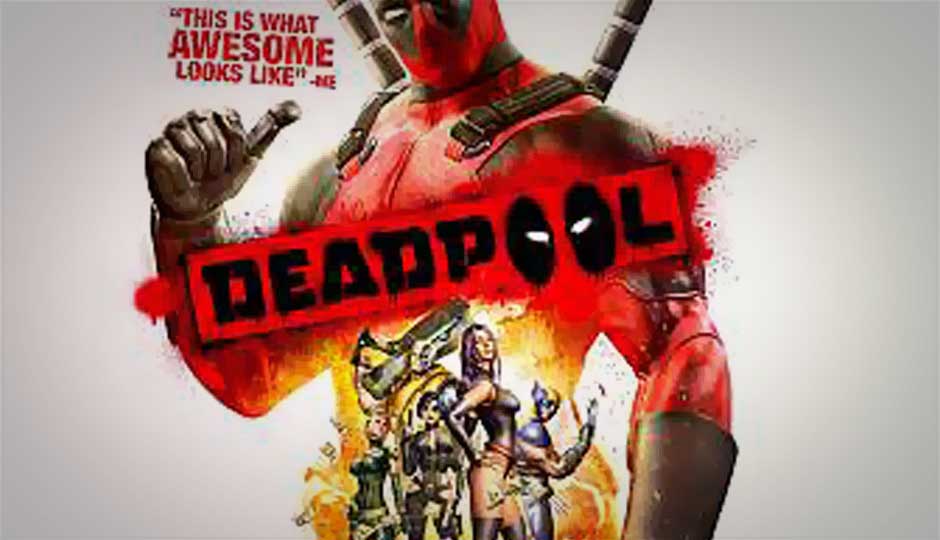 Though Deadpool is a weird hero with crass style and an insane personality, the game is fun. High Moon Studios has done a nice job in embodying Deadpool's character in the game. With good combat, weapons, upgrade options and not to forget, the humour involved, this game is recommended if you want to turn a boring weekend into an engaging one.

Introduction by Deadpool himself:

Some of you may know me as the Merc with the Mouth. And it’s true...I’m a mouthful. Not to mention, one of the most popular characters in the Marvel Universe these days – not that I’m bragging or anything. OK, I’m totally bragging, but to be fair, I’m also totally awesome. And if you want to know what gets me going in the mornings? Chimichangas! (Mmmmm…chimichangas…) 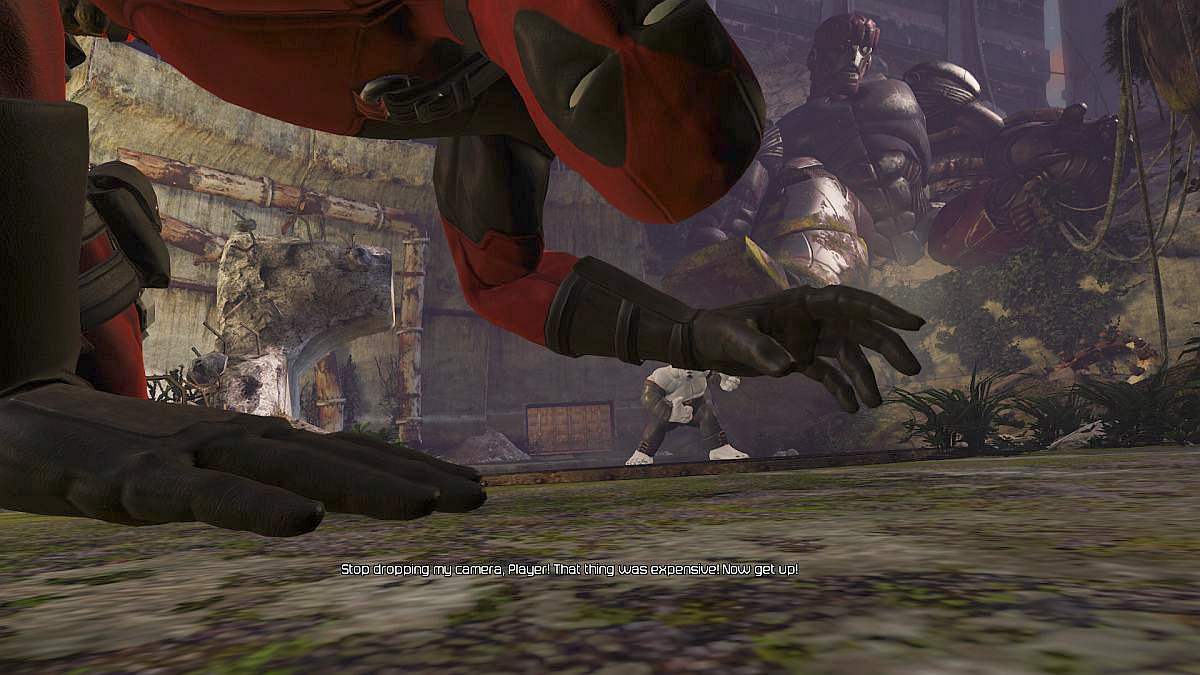 Our Introduction of Deadpool:

Deadpool AKA Wade Wilson is an anti-hero of Marvel Comics fame. He was originally a mercenary but life and some chemical experiments on him in the government's secret Weapon-X program gave Wade regenerative powers along with some other superhuman abilities, courtesy of a healing factor taken from Wolverine and implanted in Wade. To the comic book fanatics, Deadpool is also known as the “Merc with a mouth” for his humour filled antics. Not only is Deadpool powerful but completely psychotic which is seen throughout the game in his behaviour and reactions. 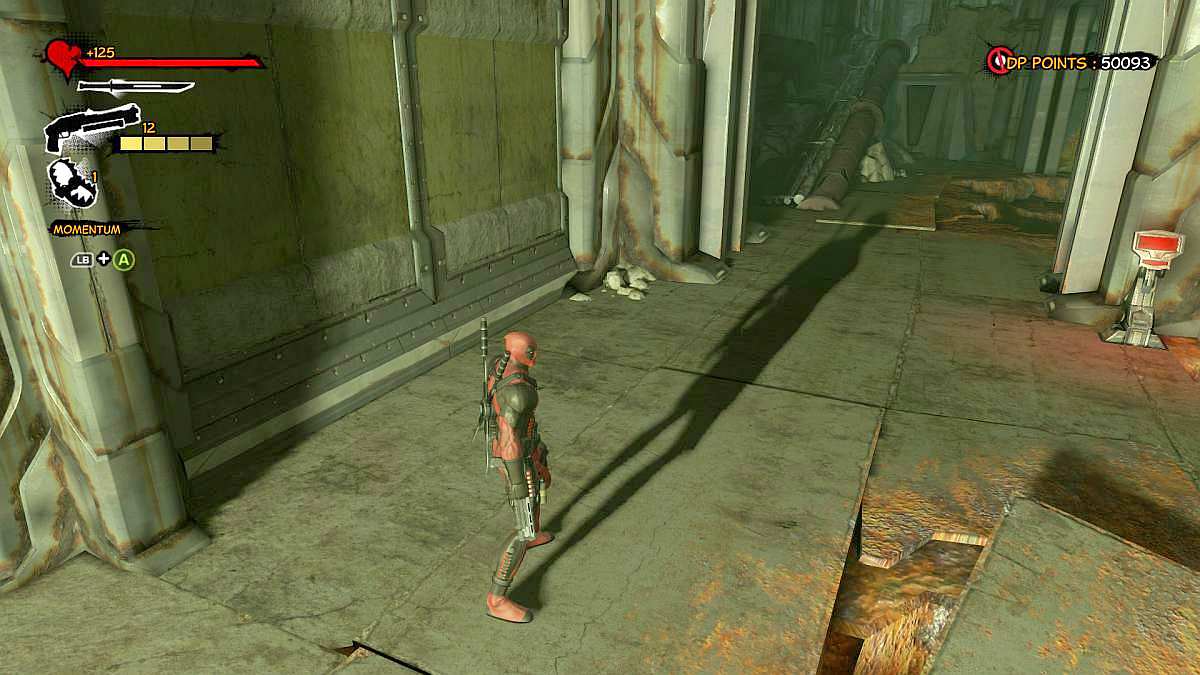 When it comes to superhero based games, what is better than picking a hero from Marvel’s huge arsenal of superheroes and making a game out of it. Not only does it work out, it is also the basis of rewarding fans a much deeper insight on their favourite hero.

The game starts from Deadpool’s dingy apartment where you pretty much have an option to interact with anything and everything like the computer, the kitchen, the T.V., his dog or even the toilet and take a censored dump. You get a call from an agent from High Moon Studios who accepts your request for making a game based on Deadpool (Yup, your in-game character or Deadpool knows that he’s in a game). You then make a call to “Nolan North” (the actual voice actor) and ask him to provide the voice over for the game. 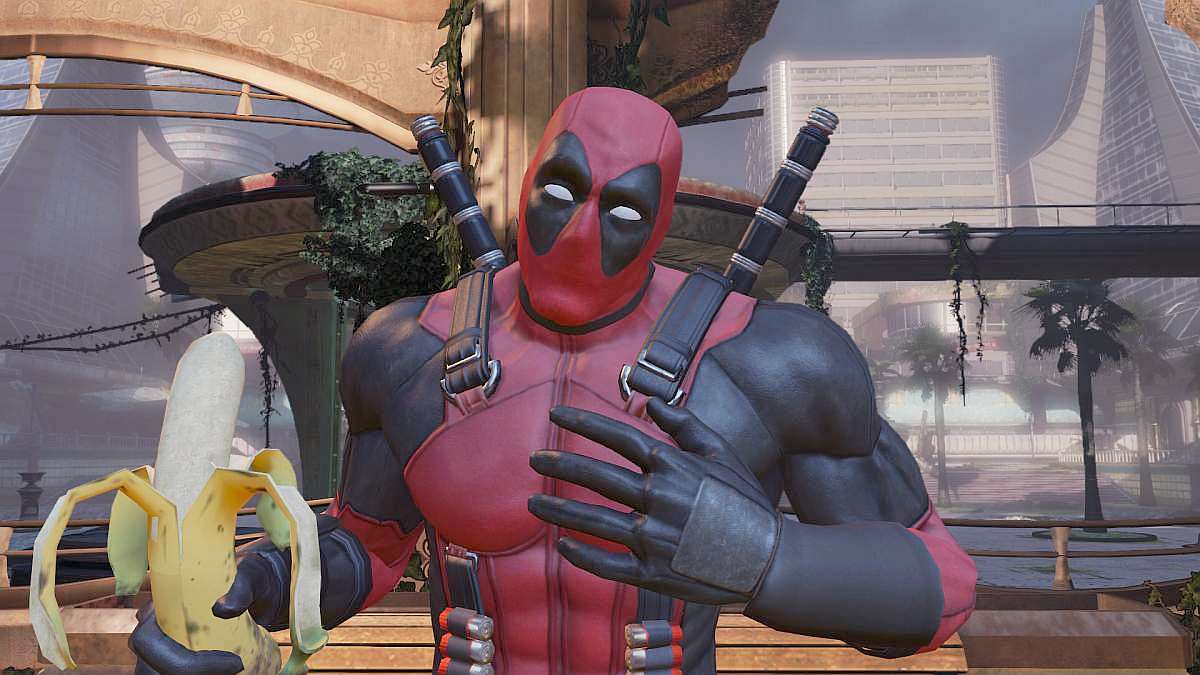 Since Deadpool is crazy, you will find that he has two different voices in his head that talk to him at regular intervals stating something or the other, or providing ideas inside comic book like thought bubbles. These voices are hilarious as you have Gollum-esque conversations playing out in his head. These inside voices are also the reason why Deadpool refers to himself as “us”.

(Spoiler Alert): Things then start to develop when you answer your doorbell and collect the script of the game that is delivered to you. After scribbling and doodling on the script, you realise that you need to assassinate a bad media mogul and you land in his headquarters from where the action starts. You then proceed hack and slash your way through the hordes of enemies that come your way but this mission does not go as planned and you drop into a plot where the game’s real villain Mr. Sinister is revealed. Mr. Sinister then takes over the media mogul’s satellite and Deadpool goes after him.You also come across characters from the X-Men like Wolverine, Rogue and others who play a brief cameo in the game. In pursuit of finding the real Mr.Sinister, you reach the destroyed mutant city - Genosha. 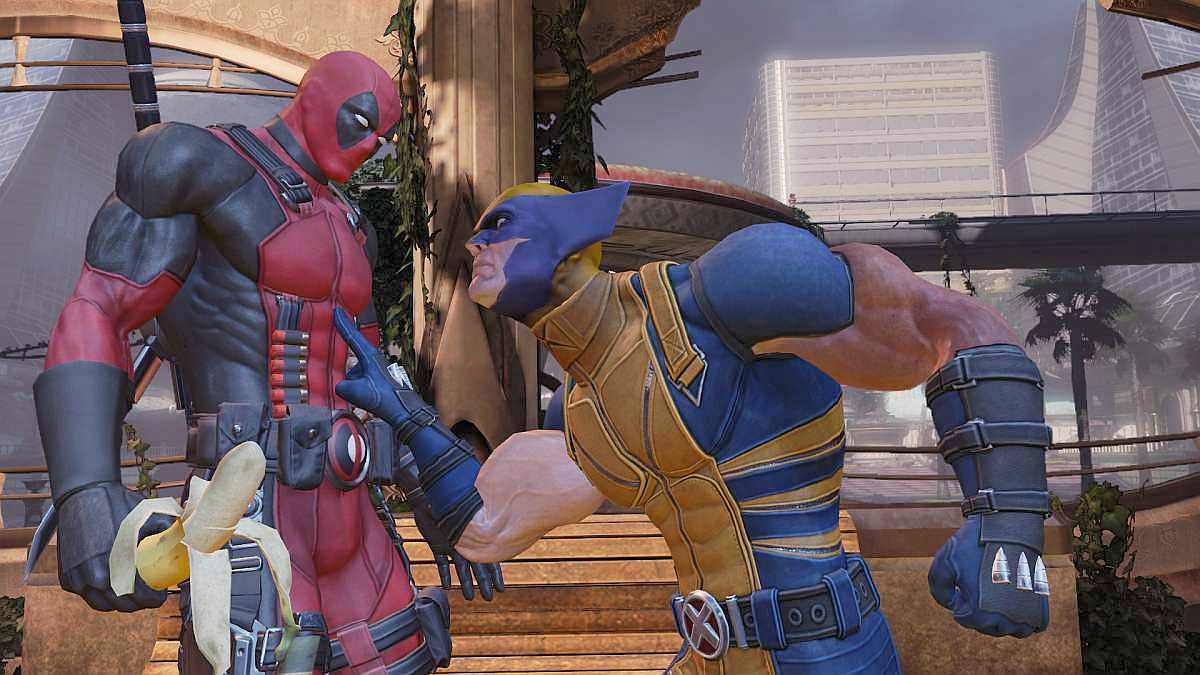 The game is built using Unreal Engine 3 and its graphics don’t disappoint as shadow and light effects look good, though the texture detail looks slightly bland. Characters are designed well and you can see a fair amount of detail in each of them, be it the enemies you are slaughtering or the attack and other animations. In terms of character detail, you will especially see Deadpool’s suit getting shredded as he gets assaulted. His suit does regenerate over time so he can look prim and proper in his red leotard when the time comes. 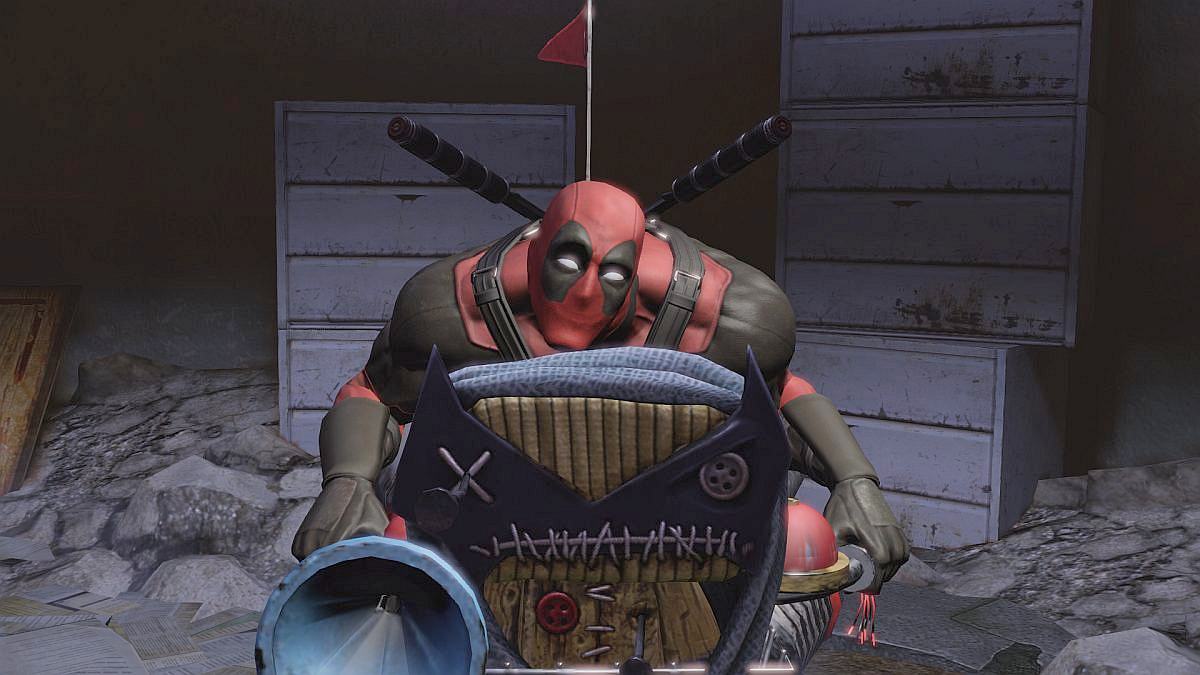 The best part about Deadpool is its voice acting. The developers must be credited because the voice that they used for Deadpool seems to hold the game together and is one of the major elements that aptly personify Deadpool’s character in the game. The other sounds are not bad either, with some better than average music thrown in between fights. Sound effects in the game remind you of most superhero-based games with ample amount of detail given to sword and knife slashes, the gun sounds lack meat though. 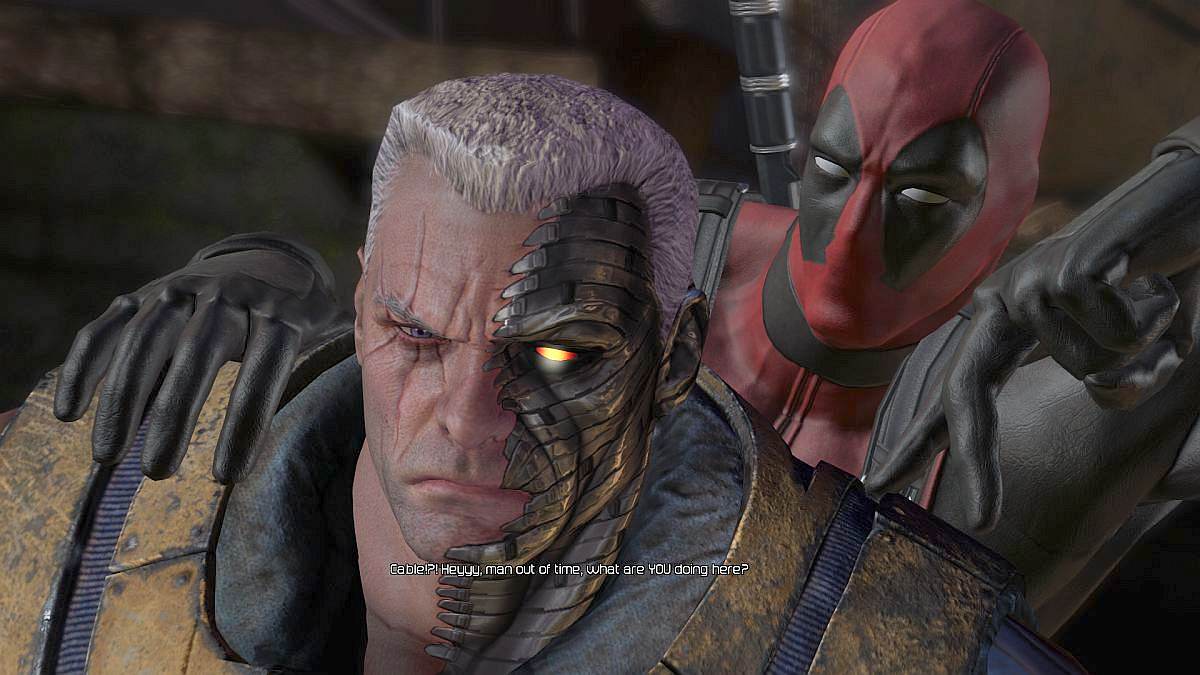 Speaking about gameplay, Deadpool has a good combat mechanics that are fun to use. Apart from Deadpool’s swords and pistols, you can collect coins in the game and increase your DP (Deadpool Points) which allow you to purchase upgrades. The upgrades not only include primary weapons like knives and hammers but you also have an option to purchase guns and throwable items such as grenades, flash-bangs and bear-claws. Combat is made interesting by adding something called “Momentum” in the game. The momentum bar gets filled as Deadpool kills or attacks enemies and when it’s full; Deadpool can perform various combos adding more depth to the gameplay. 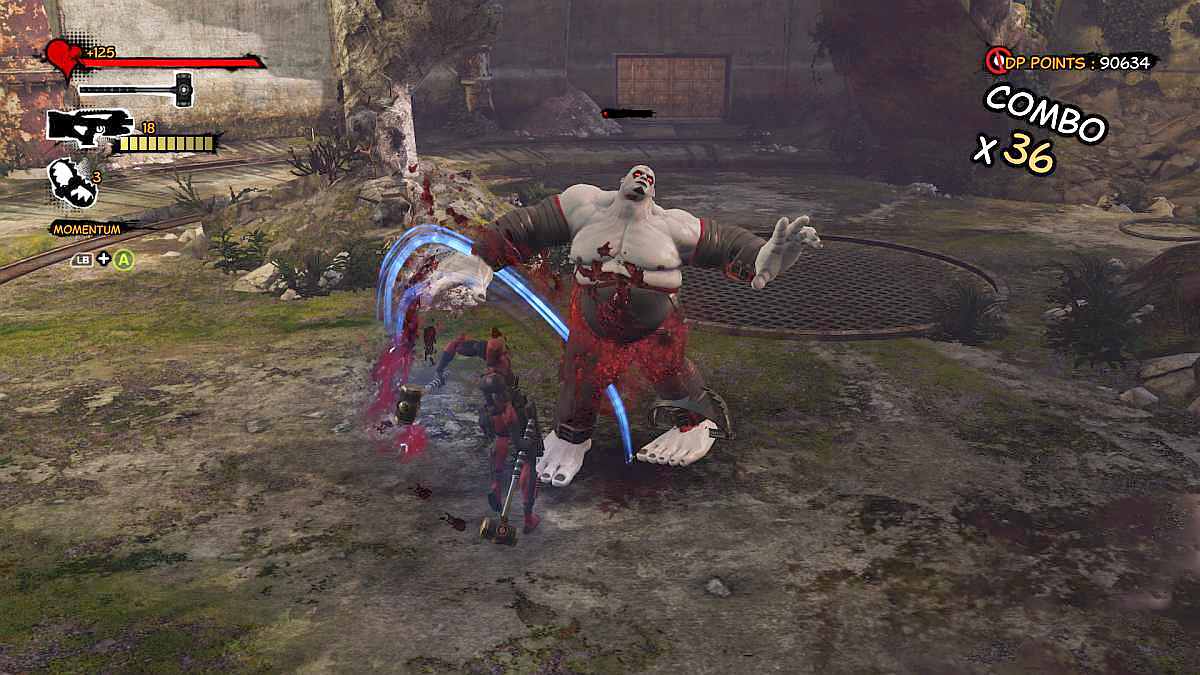 Deadpool also has teleportation powers that allow him to teleport short distances to reach a ledge or even evade enemy attacks. Gameplay is kept fun by adding some tweaks to the story or the main plot where the game publishers may run out of budget for the game which in turn transforms the game into a top-down 8-bit game or a side-scroller until Deadpool calls up the publishers and addresses the issue in his own crass style. 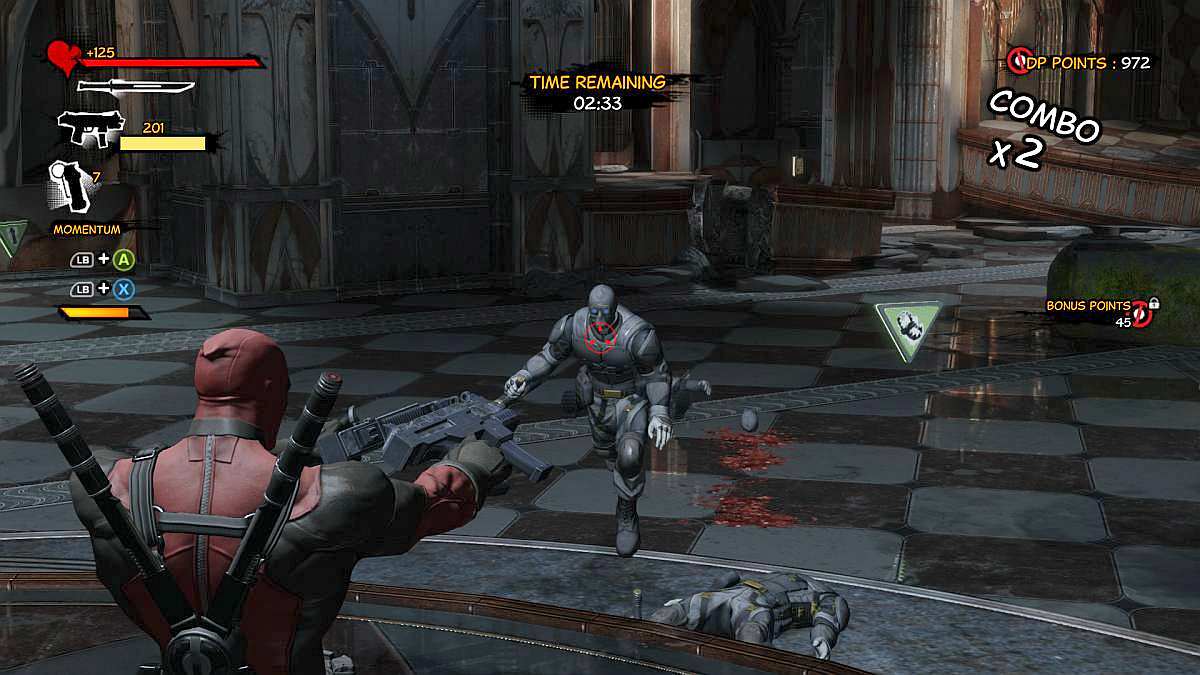 Bad camera angles and minor bugs are the things which sometimes spoil Deadpool’s gameplay barring that, there is nothing seriously wrong with Deadpool. Though the gameplay gets repetitive, the variety of enemies and the various attacks make up for it. In fact, there is hardly a time in the game when you will sit quietly, which means that you won’t get bored easily. When the game ends, you can also play the challenge mode where you need to kill enemies before the timer runs out and earn bronze, silver or gold medals. If you are playing on the PC, make sure you use a controller for Deadpool because this game is best enjoyed using a controller. P.S. You even get to bitch-slap Wolverine. What more can anyone want? 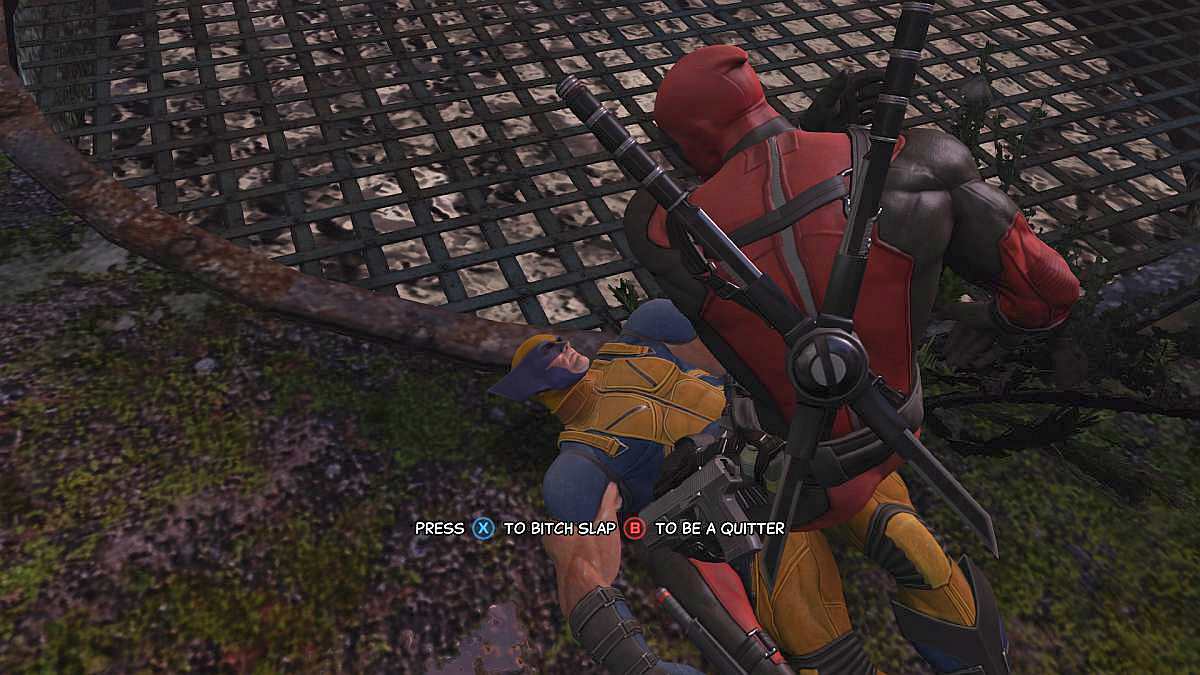 To sum it up, though Deadpool is a weird hero with crass style and an insane personality, the game is fun. High Moon Studios has done a nice job in embodying Deadpool’s character in the game. With good combat, weapons, upgrade options and not to forget, the humour involved, this game is recommended if you want to turn a boring weekend into an engaging one. 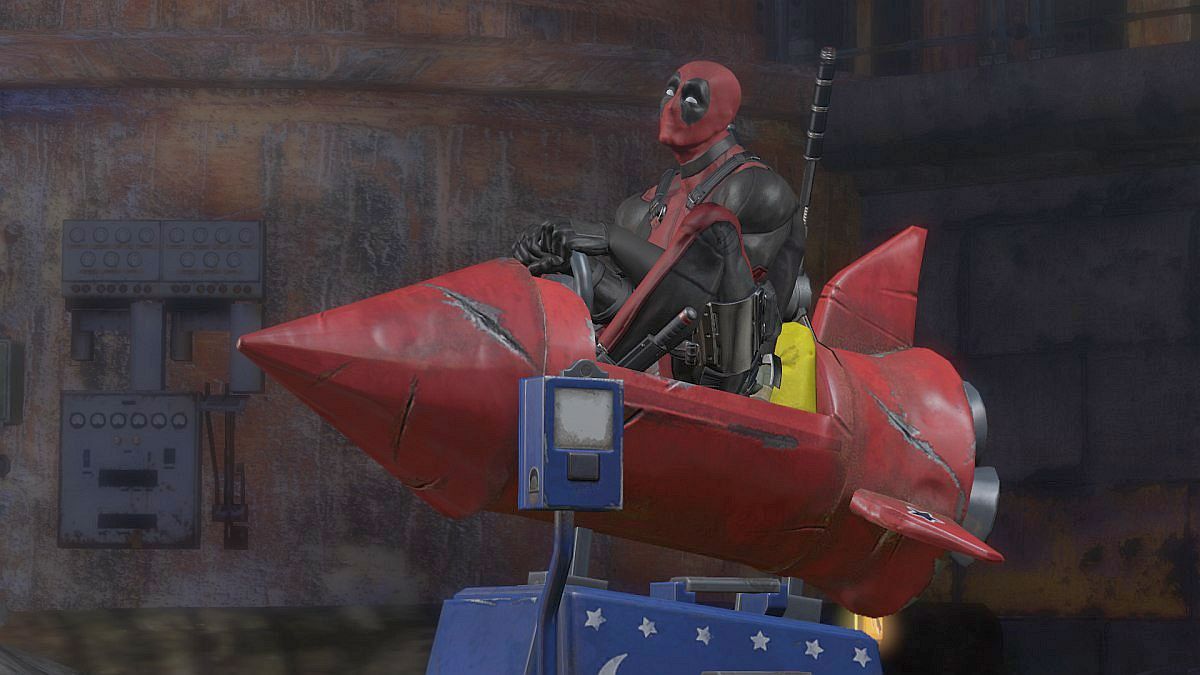