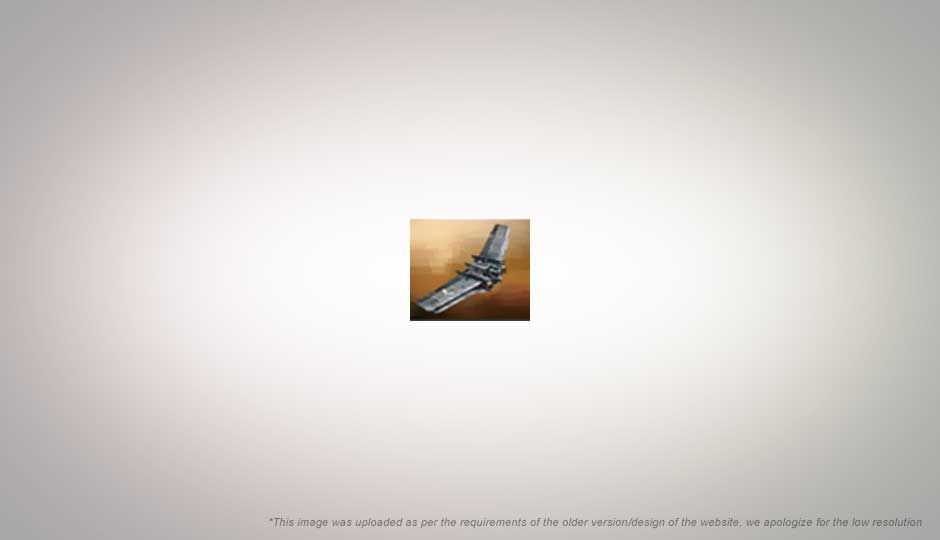 At the end of it allï¿½even though it is a lot of funï¿½you get the feeling that Airtight Games could have further explored some of the gameï¿½s elements. For instance, the cool headgear seen on the cover of the game is acquired much later into the game and it would have been nice to see upgrade and customization options for it. Since this is a Capcom game, it is priced much higher than the standard price of console games in India and the gameï¿½s relatively short run does little to add value to the price tag. However, if you have the mad cash for it and are not afraid of flying, this game comes highly recommended.

To set the premise for Dark Void, Airtight Games has taken people, locations and events from history and given those a spin. The location is the ominous Bermuda Triangle, the event is the rise of Fascism in Europe and the personality out of the history books is physicist Nikola Tesla. All of these have always been favorites of pop-culture as stuff of legends and mysteries— Bermuda Triangle has the dubious reputation of being a place of many unexplained disappearances; the Fascist have many a times been linked to the Occult and Nikola Tesla has made several appearances in works of science-fiction.
This particular work of fiction starts with a fateful journey of a cargo pilot named William Grey. On this journey he is accompanied by Eva, the protagonist’s love interest. The fateful part is that their plane crashes over the Bermuda Triangle area and they subsequently find themselves on an island that houses an entrance into the Void. The Void is a desolate place that is where the humans exiled their overlords, who are simply referred to as the Watchers. 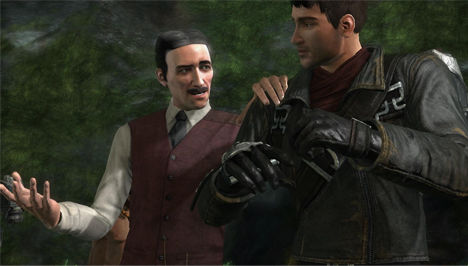 Not much is known about the Watchers besides that they are rapidly evolving and technologically advanced race, who taught early humans the ropes of technology. The humble apprentice race eventually turned on their masters and they were banished into the Void. Ever since then, the Watchers have been plotting and preparing for a comeback and this time they have teamed up with the growing Fascist powers. Resisting the return of the Watchers is a group of stranded people who refer to themselves as simply the Survivors. Along with preventing global crisis, fighting the Watchers has an added incentive for the Survivors in getting an opportunity to return home. In the thick of this is Nikola Tesla working with the survivors in exchange for an opportunity to tinker with stolen and salvaged Watcher technology.
Will and Eva inevitably find themselves in conflict with the Watchers so they join the Survivors in their quest to return home. The game’s story develops even further, but I do not want to give too much of the game away. Actually for an action game, Dark Void has a pretty deep storyline and the voice acting is not too shabby either. 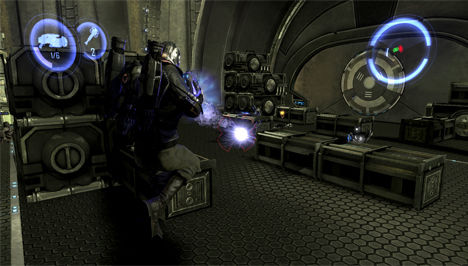 Moving on to the meat of the game, combat in Dark Void has two distinct systems. On-ground combat is out-and-out cover shooter style with the novelty of vertical combat. Since Dark Void was originally conceived as a Platformer, there are still set-pieces in the game where you are required to make the journey upwards. However, instead of landing on ramps with each jump, Dark Void uses a fresh perspective on the scenario by allowing the player to cling on to the bottom of the ramp and use it for cover. This is possible since your platforming skill is augmented with the thrust of your rocket-pack. Covering your firepower needs is a selection of six upgradable weapons and two kinds of grenades. 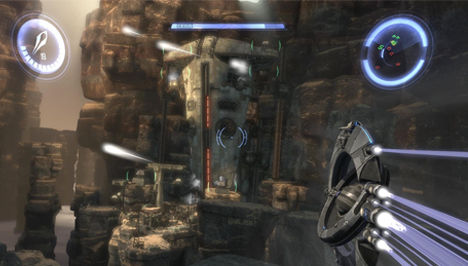 Since Dark Void is all about the rocket pack, the game will give you plenty of opportunities to take flight using your pack that is personally pimped-up by Tesla himself. If you are like me and not used to playing in true three dimensions, it may take a while to get used to the flight controls. If there is one thing we know about these developers, it’s that they know how to create an action-centric flight control system. After the initial frustration, you will find yourself pulling-off some flashy aerial maneuvers.
There are two ways of causing damage when in flight. The traditional method is using the upgradable twin-cannons mounted on the rocket pack. Alternatively, if you get close enough to the enemy aircraft, you can attempt to highjack their ride by beating a QTE based mini-game.
The enemies in this game leave behind small glowing orbs after they are defeated. When these orbs are collected, they add to the total tally of tech points. These tech points can then be used to upgrade guns and the rocket pack. Other kind of collectible comes in the form of journals and diaries that are scattered throughout the game world and they serve little purpose other than give additional insight into the events and people. 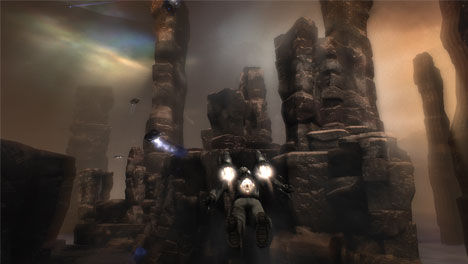 Visually Dark Void is as good as any other game in its genre and the trusty Unreal 3 engine used for this game delivers frames at a steady pace. The frame rate remains steady throughout the game, even during heated dogfight sequences. The visual ambience of the game effectively gives the feel of the time period in which the game is set and overall it has the charm and feel of the Sky Captain movie. The only disappointed for me in this department is the landscape design of the Void, which does not appear as surreal as the name suggests.
As a complete package, Dark Void is a lot of fun and the seven-odd hours I spent beating the game simply whizzed by. Dark Void is one of those games that do not last as long as you would have hoped, after it peaks. On normal difficulty level, the game feels a bit on the easier side and cover-shooter veterans may only feel the challenge at the ‘Hardcore’ difficulty level. There is not multiplayer support in Dark Void, so the only incentives for replaying the game are weapon upgrades and finding all the collectibles. 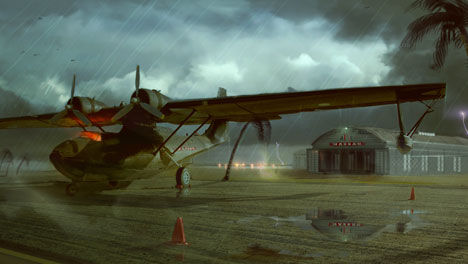 At the end of it all—even though it is a lot of fun—you get the feeling that Airtight Games could have further explored some of the game’s elements. For instance, the cool headgear seen on the cover of the game is acquired much later into the game and it would have been nice to see upgrade and customization options for it. Since this is a Capcom game, it is priced much higher than the standard price of console games in India and the game’s relatively short run does little to add value to the price tag. However, if you have the mad cash for it and are not afraid of flying, this game comes highly recommended.